Ever since we were guided through an in-depth explanation of Philips’ new Perfect Pixel Engine technology at this year’s IFA technology show in Berlin, we’ve been champing at the bit to get our hands on the first TV to use it. And now, at last, that TV is here – and we’re feeling just a little deflated. Why? Because in an AV world where everything is getting inexorably – and gleefully! – bigger, the 32PFL9632D seems somehow a bit small at 32in. Not least because it raises genuine concerns about whether the supposed benefits of Perfect Pixel processing will really be apparent at such a size.


Ah well, professionals that we are, we must set such disappointments aside and get on with giving the set a chance. After all, maybe Perfect Pixel will prove to be so good that it will even dazzle at 32in.


Having already banged on about it so much, we probably ought to get straight into some kind of explanation of what exactly Perfect Pixel is. Essentially it’s the latest version of Philips’ long-running Pixel Plus technology, but a version so extensively tweaked and added to that Philips felt it deserving of a completely new name. 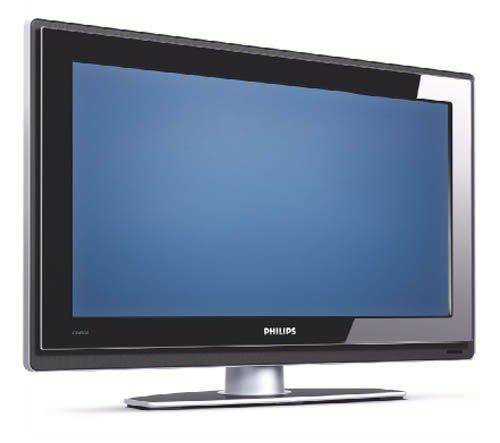 Pixel Plus elements continuing into Perfect Pixel include the technology’s famed ability to add fine detail to the picture, excellent noise reduction systems, and some exemplary colour processing that boosts saturations and makes hues more consistent, with none of the common saturation loss that can occur towards the edges of objects within a picture.


The new stuff that turns Pixel Plus into Perfect Pixel Engine kicks off with an HD Natural Motion circuit. Now to be honest, this doesn’t exactly fill me with hope as much as you might expect, since its name reveals it to be a descendant of Philips’ Digital Natural Motion, a processing system which I’ve not had much time for in the past, on the grounds that it smoothes motion in a picture so much that I actually found the effect unnatural and even quite nauseating.


But to be fair the processing power available to the new system has apparently been hugely upped to make it more adaptive to the various source types it has to deal with. Furthermore, a new 48Hz playback element has been added specifically to improve the presentation of the new 1080p/24fps format now found on most Blu-ray/HD DVD discs. The idea is that the mathematically simple process of converting 24fps to 48Hz rather than 50Hz or 60Hz should reduce noise in the resulting pictures.

The final key piece in the Perfect Pixel jigsaw is new 14-bit colour circuitry that should help the set deliver a wider, more natural and more subtly differentiated colour palette. 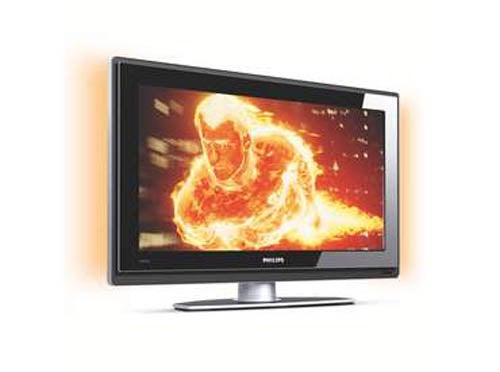 As if all this high-falutin’ processing wasn’t enough, the 32PFL9632D also carries the innovative Clear LCD system enjoyed on a couple of Philips’ previous LCD models. This replaces the usual single backlight with an array of Hot Cathode Fluorescent Lamps that can emit light in waves to approximate the scanning effect found with good old CRT technology. The point behind this is that it opens up the potential for deeper black levels than can be possible with a single, always-on backlight. Plus it does away with LCD’s ‘step and hold’ problem when showing motion resulting, hopefully, in sharper and smoother moving objects.


The 32PFL9632D’s aesthetics, meanwhile, are a high tech feature in themselves. For the cutely glossy black surround is joined by Ambilight: the Philips technology whereby coloured light is emitted from the TV’s rear sides to make the viewing experience more relaxing – as well as the TV more of a style talking point.

The 32PFL9632D’s Ambilight systems employs LED rather than fluorescent lighting for the first time too, resulting in noticeably richer but also more subtly varied colour output.

The shift to LED lighting means Ambilight uses less power than before as well, reducing any ‘green’ complaints that might be raised about it.


Before getting into whether or not all of Philips’ processing efforts deliver the picture quality goods, we really need to briefly cover the 32PFL9632D’s connections, for they’re prodigious.


Three HDMIs get the ball rolling, with other highlights including a component video feed, a PC jack, and a USB port able to playback a variety of multimedia formats, such as MP3s, .alb slideshows, JPEGs, plus MPEG1 and MPEG2 files. Other key specs you should know about are a native resolution of 1,366 x 768, and a seriously high – by LCD standards – claimed contrast ratio of 8000:1.

And so to the moment of truth: is the Perfect Pixel Engine all it’s cracked up to be? Actually, yes, it is.


Its single greatest achievement can be seen in the way it handles moving objects. Everything from a sprinting footballer to a gentle camera pan is immaculately handled, with silky smoothness and practically no sign whatsoever of LCD’s tendency to lose resolution over moving objects. Even better, the smoothness now looks entirely natural rather than forced as it did with Philips’ old Digital Natural Motion system.


So good is the 32PFL9632D’s motion handling, in fact, that we can honestly say that it’s the first LCD TV we’ve seen that truly conquers this traditional technological weak point. Outstanding!


And it’s a talent made all the more remarkable because even though it’s only achieved through a huge quantity of heavy duty image processing, this processing seems to generate practically no unpleasant side effects at all. 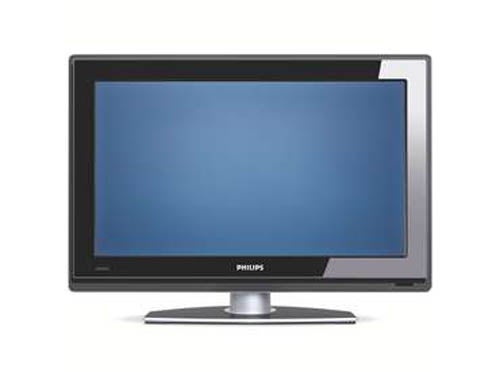 With none of the customary LCD motion blur to distract us, we’re also free to soak up the remarkable sharpness of the 32PFL9632D’s pictures. With HD material the amount of detail and texture on show is truly jaw-dropping, even on a screen as small as this one, and the icing on the cake comes from some terrific, noise-free crispness.


Not that the 32PFL9632D’s sharpness is reserved exclusively for HD, though. Standard definition images also look almost uniquely crisp, as the Perfect Pixel Engine proves as versatile as it is powerful. And again this extra crispness is achieved without unpleasant side effects like processing shimmer or dot crawl, except perhaps while watching the very poorest quality channels on the Freeview digital platform.


The Clear LCD system, meanwhile, helps the 32PFL9632D produce some impressively deep black levels by the standards of 32in LCD technology, and this talent together with, we presume, the new 14-bit colour processor, also aids the 32PFL9632D in serving up terrifically rich, dynamic but still natural colours that look great with everything from Eastenders to the cartoonish delights of Team Fortress 2 in Valve Software’s Xbox 360 Orange Box package.


For all the 32PFL9632D’s quality, though, we feel there is still room for picture improvement. For instance, really, really fast-moving and small objects, such as a golf ball in mid flight, can cause the Perfect Pixel Engine to generate a curious ghosting effect around them. If you’re experiencing this with something you’re watching, though, deactivating some of the various Perfect Pixel elements in the onscreen menus can usually get rid of it.


Next, while good by LCD standards, we feel there’s still even more black level potential to come from the Clear LCD backlight system. And finally we couldn’t help but feel a bit disappointed by how much contrast the image loses if watched from more than around 35 degrees down the side.


While the 32PFL9632D’s pictures may not yet represent complete perfection, they get pretty darned close to it, and might certainly be argued to deliver the best pictures yet seen on a 32in LCD TV. Especially since they put to the sword more fully than any TV before LCD’s pesky motion resolution problem.


Perhaps the most remarkable thing about all the picture strengths we’ve described, though, is the fact that we’re seeing them on a 32in TV. Frankly we’re positively drooling about what Perfect Pixel might achieve on something a little bigger. 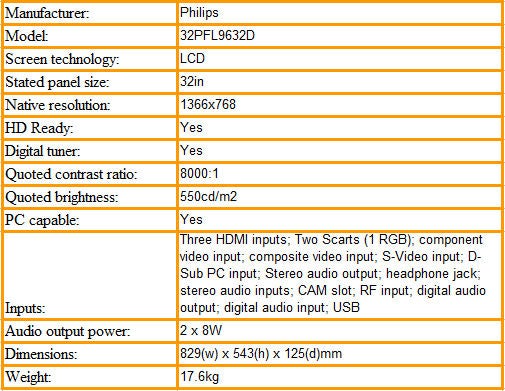