Manufacturing small TVs has become a forgotten art these days. The average size of TV bought in the UK is now 42 inches, and while the 32-inch market is apparently still strong, anything smaller than this tends to be “lowest common denominator” stuff – little more than plastic rectangles housing screens.

However, at a recent TV product launch in Brussels, Philips unveiled a genuine bit of innovation in the small screen space in the eye-catching 24PET5231.

This TV’s simple but pretty inspired trick is to combine two classic second-room products – a small-screen TV and a pretty high-spec Bluetooth speaker – into one attractive, space-saving package. As you can see from the pictures accompanying this article, the 24PET5231 is finished in a kitchen- and conservatory-friendly gloss white, and basically moulds a 24-inch screen onto a startlingly chunky speaker.

I’m aware that this rather prosaic description doesn’t exactly make the 24PET5231 sound like a supermodel, but in the flesh it’s actually quite attractive. Its looks are further enhanced by the way in which the silver buttons and speaker grille contrast with the dominant white, alongside its helpful cable management system.

The TV part of the deal carries a Full HD native resolution and will be equipped with a Freeview HD tuner for the UK. Also, the provision of a VGA input on the TV’s rear means that it can double as a PC/gaming monitor – useful for a TV that may well find its way into people’s studies.

Sound is provided by a unit that’s reckoned to be equivalent in spec and performance to a typical £100 standalone Bluetooth speaker, thanks to its 16W of power and front-firing orientation. Almost every other small-screen TV uses relatively puny down-firing speakers, so with the 24PET5231’s sound system alone, it’s ahead of the competition.

Of course, the real charm of the 24PET5231’s integrated speaker is that it’s powerful enough to play music convincingly. Not only that, but it’s capable of playing it from a wide range of external sources – such as smartphones, tablets, and computers – wirelessly too. You don’t even need to have the TV screen switched on to use the speaker.

Taking the 24PET5231 for a spin at the Philips launch event quickly revealed that this nifty little combi is more than just a cool concept; it works superbly. Neither the TV nor the speaker components felt as though they had been heavily compromised by being tied to the other in the 24PET5231. 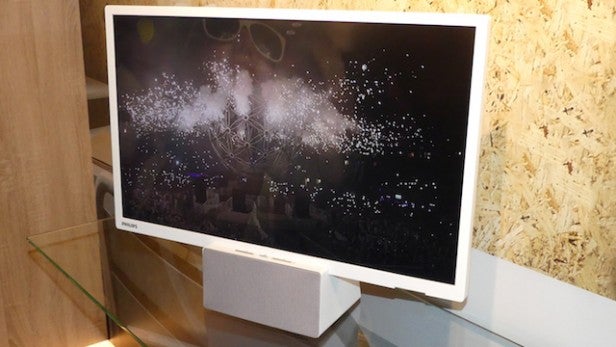 As far as the 24PET5231’s pictures are concerned, images are noticeably detailed and rich in colour by small TV standards. However, from what I’ve seen so far they would benefit from being a little brighter, and suffering a little less with motion blur.

The speaker delivers a soundstage with TV footage that spreads much wider than anything you’d achieve with typical small TV speaker systems, while also benefiting from a much deeper bass extension.

It remained free of distortion, too, and even at nearly full throttle it didn’t cause the TV part to rattle or “buzz”. Admittedly, the music sources on display were relatively unchallenging.

I would have preferred the speaker to be able to push vocals a little more strongly, sounding more extended and detailed in the treble range. It’s also a pity – if not really a surprise – that it isn’t compatible with Philips’ Izzy multiroom wireless speaker system.

Overall, however, the 24PET5231 caused a much bigger stir among those assembled at the Philips event than any standalone small-screen TV or Bluetooth speaker could have. I suspect that this could well follow through to the public too – especially since Philips is apparently targetting a sub-£250 price for its nifty new take on the portable TV genre.

Look out for a full review of the 24PET5231 when it launches in a few months.