If at the beginning of this year you made me write a list of games that I was most excited about, Phantom Doctrine would have been near the top. A Cold War themed spy strategy title with an X-Com flavour, it’s so much my jam that it feels like it was conceived in a focus group meant entirely for me. So what could be better?

Unfortunately, disappointing execution and some genuinely bizarre design choices stop this game from being a classic and, perhaps fittingly for something riffing so heavily on 1970s spy culture, the whole process feels as dull and bureaucratic as the spy work depicted in a John le Carré novel. 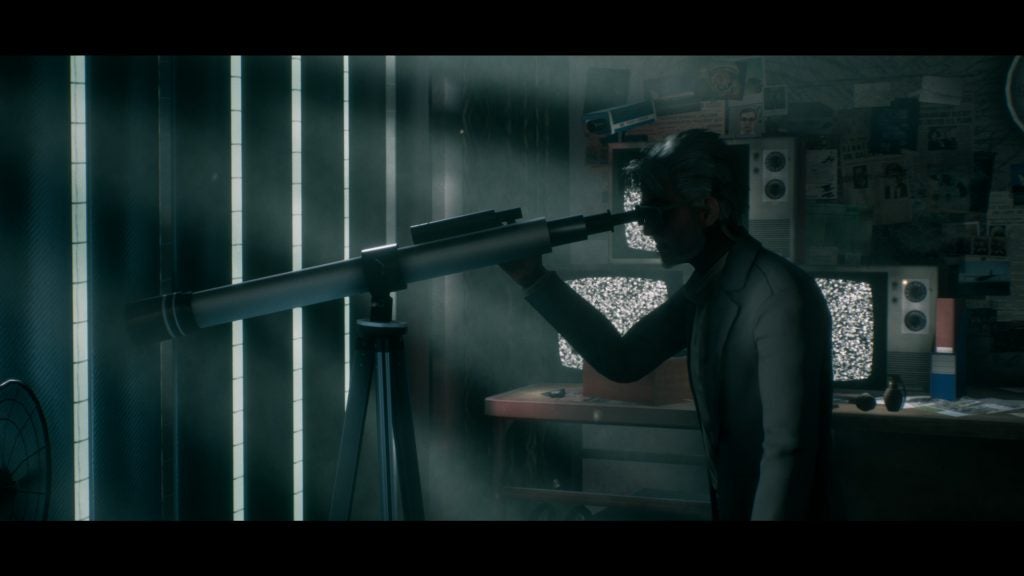 Chief among these aspects is the decision to take away the random element to whether attacks will hit. Every shot fired in Phantom Doctrine strikes true, at any range. Damage is mitigated instead by the ‘awareness’ of characters, a secondary resource that is regenerated over time, or with special abilities, and is used for a variety of things.

Here’s the problem though: this means a poorly trained enemy with a pistol can shoot from across the map and do damage, even if it forces your agent to dodge — which uses their awareness — or to take a graze or hit. This happens regardless of distance, cover or any other consideration. And as your awareness is quickly eroded under repeated gunfire, there’s a snowball effect as with each targeted attack, an agent has less of a chance to defend themselves.

Detailed descriptions of specific mechanics are often clumsy in written form, but it’s absolutely crucial to understand that the decision to make the to-hit system like this has changed the entire feel of the game.

It’s nearly impossible for a player to survive extended combat, but it also means that cover and positioning are nearly irrelevant and the game feels hideously unfair as soon as bullets start flying.

Even the wide collection of spy gadgets don’t go far enough to minimising the frustrations of combat, because no matter what you do, so many of the early fights devolve into death by a thousand cuts as enemies ping away at you with tiny pistols.

The game has a lot going for it: it nails the spy aesthetic, which informs several of the mechanics, making it a unique experience. 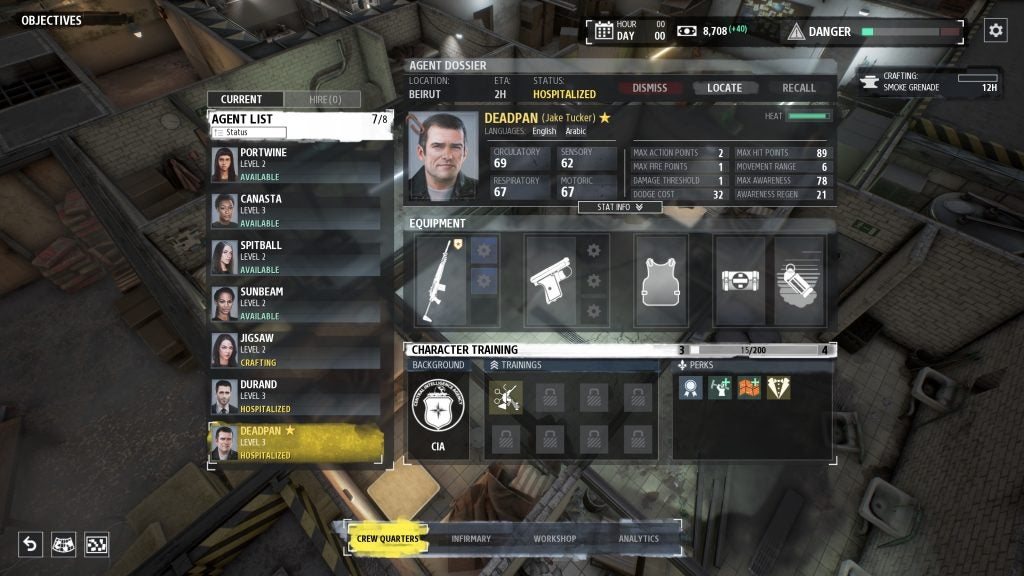 At a tactical level, a highlight is the disguise system, where your operatives can be inserted into the mission ahead of time and will start in-situ in the mission, free to walk around without suspicion. If there’s any problem with the disguise system, it’s that it’s actually too powerful. Only enemy agents can detect disguised agents, and with the right level-ups, your disguised units are immune even to that, only breaking cover if they kill someone in full view of witnesses or cameras.

When you hit this point, the two agents you’re allowed to disguise will run around and do the mission, while the other agents stand outside with big guns, hoping to get a chance to do something.

Disguised operators can’t wear body armour or clutch any weapon bigger than a submachine gun and a pistol, but I didn’t really feel the limitation of this. In fact, wearing heavy armour immediately marks agents out as hostile, even in areas where they wouldn’t usually be trespassing. So there’s a risk-reward here, if you want to bring the gear to let you rock and roll.

Spoiler: the ‘you can never miss’ decision means it’s never worth the risk to bring the big guns. Combat is a gamble you can never win. 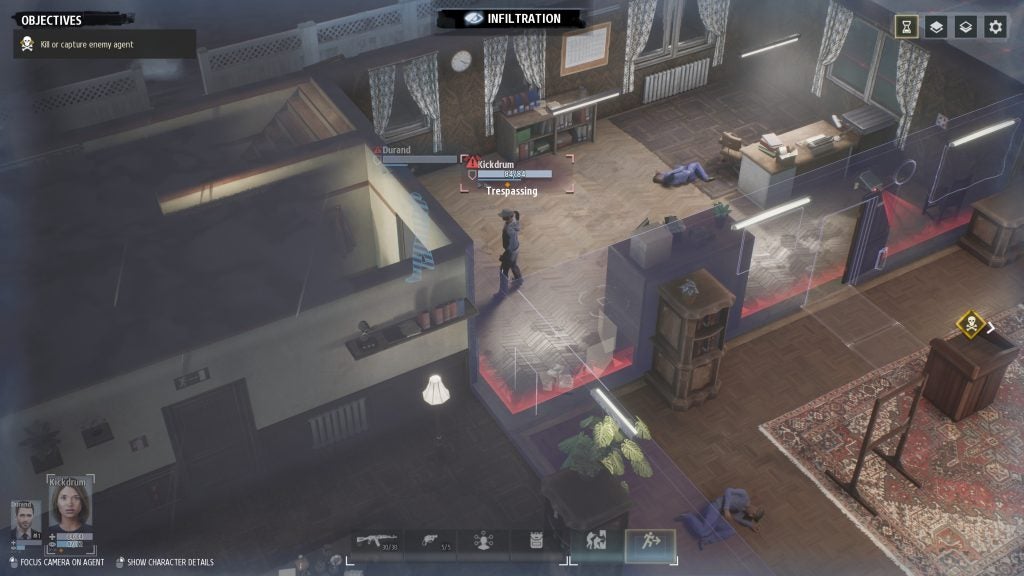 Teams on the ground can be assisted by off-map support that includes cleaners that come in to bag up bodies and keep the heat low, spotters with telescopes, and even snipers on nearby rooftops. These add a lot of extra options, but also evoke the feeling that you have a spy organisation behind the scenes.

On the global map, the strategy layer is a complex beast, with your spies jetting around the world liaising with informers, taking out enemy agents and getting wrapped up in other missions designed to further your goals and hinder your enemies. The upkeep – keeping agents rolling around the globe to ensure they get the requisite training and are in the right place at the right time – can be arduous.

However, look at your base and there’s a lot going on. Here is where the game shines: agents can forge money as a primary source of income, or generate new papers and passports for agents that get burnt for catching too much heat. Other agents can craft gear, or investigate packets of information you find in the field. You can train your agents to give them new weapon proficiencies and skills, and even give them perks that will serve them well during tactical missions.

A personal favourite is the MKUltra facility, which lets you subject captured agents (and even your own) to interrogations, brainwashing and other forms of nasty torture. Sometimes this means you can activate an enemy agent in the field to fight for you, or get them to sabotage their cell when they return to home base. This can happen to you too, which is a particularly unpleasant experience that’ll make you look hard at your digitised agents whenever they leave your sight for more than 15 seconds. 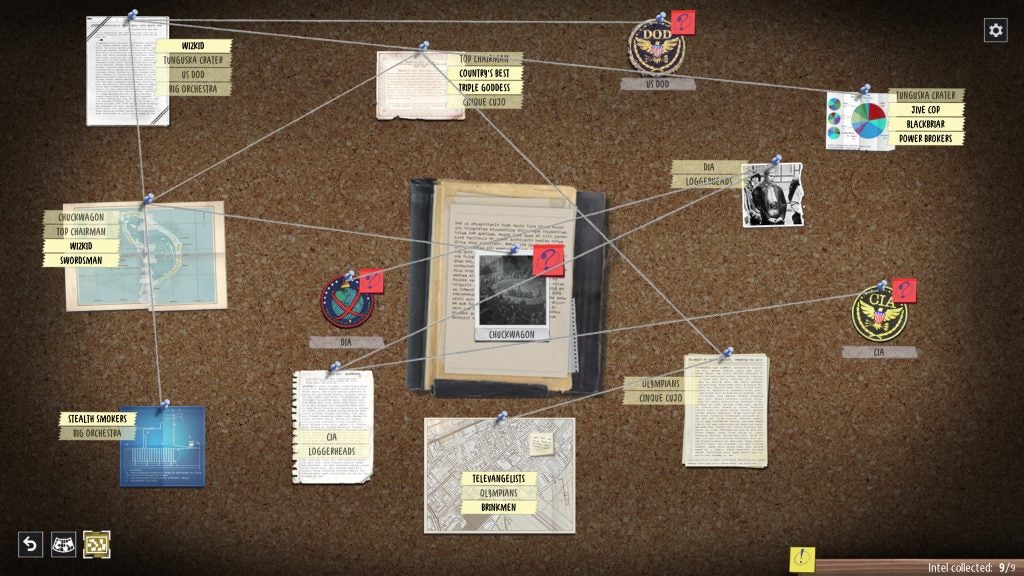 There’s a problem, however. All of this work: the detailed systems and interlocking mechanics that underpin Phantom Doctrine all feel like busywork. Micromanaging your spy agency rarely feels like fun, and considering success in the game is so incredibly hard-earned, it’s hollow.

This isn’t helped much by the game’s stories. There are three stories that reflect the background of your agent. I chose the CIA background and worked with my American pals to try and crack a conspiracy. The story was very much spying by the numbers and it was hard to muster the will to keep following it, when I was more invested in trying to build out my spy agency.

The story is interlaced with some sections of investigating evidence, using a virtual cork board to connect different marked keywords. Although one of the strongest elements in the game, it was let down by the mediocre product wrapped around it.

Phantom Doctrine is a disappointment. However, it has bundles of ambition, a lot of smart ideas and a clear and real love for the spy genre it hamfistedly mimics. I’ve no doubt it will find a cult following, but for people expecting a turn-based tactics game along the lines of titans like XCOM 2 and Jagged Alliance 2, this isn’t it.

But that doesn’t mean I’m going to stop playing it. It’s deeply flawed – but like a proud and misguided parent, I keep wanting the best for the game and can’t leave it alone.