The Phantasy Star series has rightfully earned a place in the gaming hall of fame. First the initial run of Megadrive games proved instrumental in first introducing Western audiences to the joys of the Japanese RPG (not to mention the superb Master System original – ed.), then Phantasy Star Online showed that online role-playing and consoles could mix. Nothing Phantasy Star Universe could do can mar either of these achievements, or the Phantasy Star name. 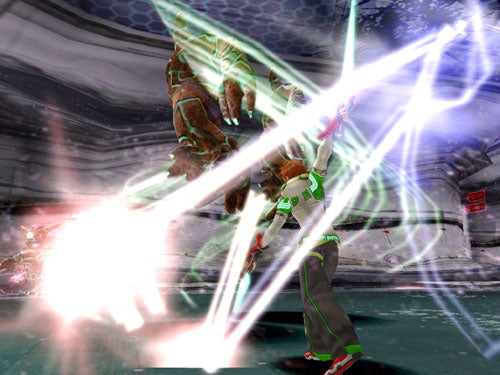 You can certainly see the thinking at work: let’s update Phantasy Star Online for a new generation, and simultaneously give solo players a taste of the experience. The result is effectively two games – a single player campaign complete with storyline, non-player characters and unfolding chapters, and a more traditional Phantasy Star Online network game where players gang up to tackle missions on the three worlds of the Gurhal system. The problem is that neither portion works quite as well as it should. A lot has happened since Phantasy Star Online appeared – the appearance of Final Fantasy XI, the rise of MMORPGs on the PC – but Sonic Team appears to have been working in a vacuum, content to let the advances of the last six years drift by, while essentially reworking the same material one more time.


Arguably, it’s the single-player offering that proves most disappointing. The Sci-Fi meets Fantasy setting still has magic, and the decision to give the whole thing the feel of a high-class Anime series is a great touch, with chapters divided by cool opening sequences, and nice linking segues to take you from one part of the universe to another. However, the content itself is the worst sort of trite Japanese RPG nonsense, with a particularly irritating example of the archetypal surly teen hero, hideous stretches of over-talky exposition, and a range of secondary characters of bewildering crapness. What’s more, the levels themselves are spectacularly dull affairs; simplistic dungeon crawls with tiresome secondary objectives, featuring creatures of no discernible intelligence and forcing you through some of the most laborious key-finding, monster-bashing, area-scanning tosh in eons. It’s a game you’ll be bored of within the first hour, and it doesn’t get better with time. 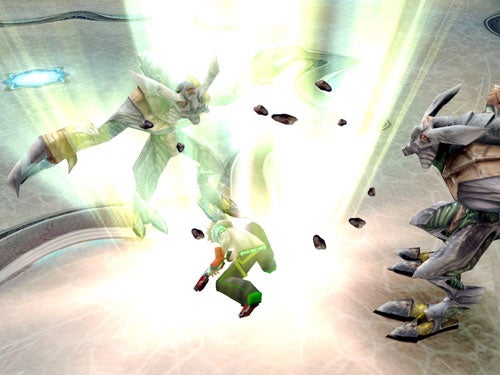 What’s more, the overall look and feel is horribly dated. It doesn’t help that the PC version appears to be the laziest port imaginable of the PS2 version, nor does it help that – on this evidence – the PS2 version isn’t a standout title on that platform. Both the interior and exterior areas are flat and poorly textured, and while the monster and character design show signs of Sega’s usual flair, the execution is surprisingly basic. Cut-scenes in particular, are hideous affairs, with non-existent or minimal lip-synching and the sort of dancing-oddly-while-I’m-talking rubbish that should have ended in the 32-bit era. Worse still, the controls have been lifted directly from the console version, ignoring the classic mouse and keyboard combination in favour of oddly-mapped keyboard based commands. Without a joypad, even movement is a chore, let alone fighting, and while the menu systems might make sense on a console, they’re surprisingly hard work on the PC.

On the plus side, fighting remains the game’s strongest feature. Unlike most RPGs, the combat system is a real-time affair, with three buttons used to trigger basic melee attacks, power attacks and ranged attacks with side-arms, rifles and assorted projectile weapons. It’s a refreshing change from the majority of RPGs where you essentially trigger a particular attack then watch as it plays out, feeling more direct and – thanks to the over-use of glowing trails and impact flashes – looking more spectacular. In fact, the promise of buying more impressive weaponry and upgraded special moves is one of the few things that keeps you in the game; there’s always a temptation to see what that next ‘photon skill’ or upgrade to your arsenal will do. 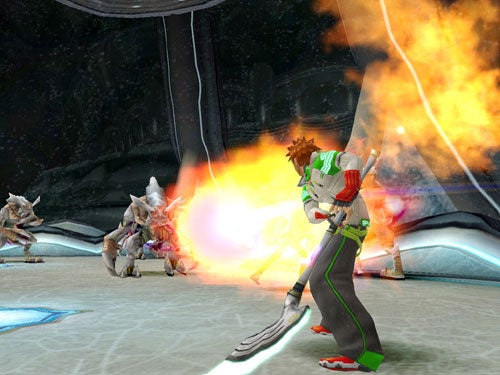 While I’m dishing out compliments, I might also mention the fact that the sound effects and music are pretty good (bar the execrable voice acting), with strong orchestral themes and generally exciting battle noises. It’s one area of the game where I have little to complain about.


Sadly, it’s about the only area. If you’re looking for a single-player RPG, there are so many other options on the PC that you’d be crazy to opt for this one. On the PS2 or Xbox 360, meanwhile, this isn’t fit to lick the boots of Final Fantasy X or Dark Chronicle, let alone The Elder Scrolls: Oblivion. Having seen Mass Effect in action, it’s gob-smacking that Sega felt this was good enough for a 2006 audience. 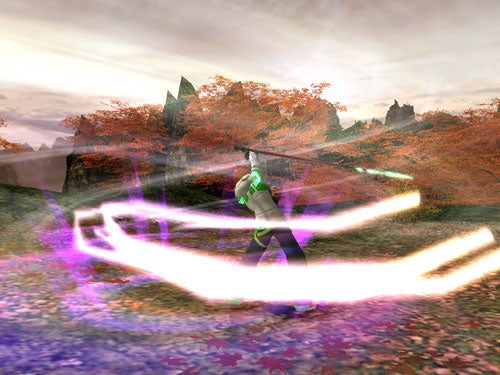 But then I can’t imagine anyone buying this for the single-player mode. No, the hook here is what Sega terms the Network mode. Now, Phantasy Star Universe still isn’t what you’d call a proper MMO; like the original Phantasy Star Online and more recent efforts like Guild Wars, it’s more what you’d call a cooperative RPG, where players band together in an in-game lobby, then go off on instanced quests. It’s a nice way to cut down on the lag that’s still experienced when thousands of players occupy a single server, and you can see the potential of the game. It’s a simpler, more immediate affair than World of Warcraft, Final Fantasy XI or even Guild Wars, with the real-time combat giving it that fun, pick-up-and-play factor that these more complex, skill-based games often miss out on. I can imagine that with four-players coming together to tackle quests and generally kick monster butt it would be an entertaining experience, albeit a fairly limited one. There’s not the depth or hardcore character development that makes these bigger online games so satisfying in the long-term.

My problem is that my actual experience hasn’t matched my imagination. At the time of writing the PC servers are fairly under-populated, and the initial sign-on server seems to hand you off to the least-populated server when you log-on – a bit like a host who sits you in the corner of an empty room at a party, while everyone else is mingling in the kitchen. Switching servers is easy enough, providing the one busy server isn’t full, but even then finding people to adventure with at the right level and wanting to do the same mission is near-impossible. As the missions are hardly solo-friendly, with a distressing tendency to dump you out should you die and force you to redo the whole thing again, without checkpoints, it’s a slightly dispiriting experience. 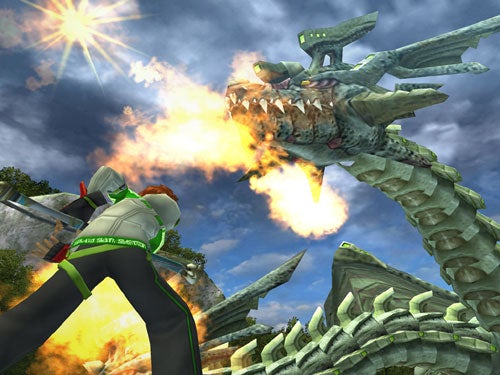 In the event that you do find a pick-up group to play with, the game suddenly comes to life, but after World of Warcraft, City of Heroes and – particularly – Guild Wars, this doesn’t feel like an easy game to break into. In addition, the actual missions still aren’t that entertaining, being fairly simple dungeon-crawl affairs (even if the ‘dungeons’ are on the planet surface). Compare these truncated, sectioned-off planets to the wide-open landscapes of other online RPGs, and they seem small and horribly dated by comparison. 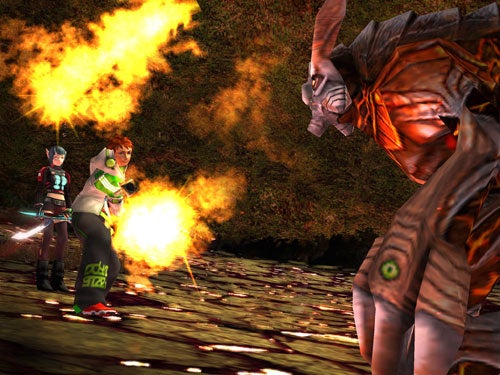 On the PS2 or Xbox 360, where online RPGs are rare, there’s a temptation to say that at least Phantasy Star Universe gives you a taste of the joys of the genre. On the PC, however, it’s a wash-out, and that’s a shame. With it’s anime style and distinctly Japanese mix of Sci-Fi and Fantasy themes, the Phantasy Star ‘universe’ has real potential, and you can’t help wishing that Sonic Team would look at the likes of Guild Wars and try to combine that game’s larger worlds and player-friendly features with the immediate, real-time combat that can make this Phantasy Star Universe an enjoyable place to visit on occasion. After all, wouldn’t it have been better to –as in WoW or Guild Wars – have a multiplayer game that you can still solo through, rather than a weak single-player mode and an underdeveloped, under populated online one. As it is, Phantasy Star Universe offers a reasonable dollop of nostalgia for those who miss the glory days of Phantasy Star Online, but any newcomers will feel baffled as to what the appeal is. And when you factor in a monthly subscription – with no initial free period unless you cough up for at least a month – I doubt they’ll be tempted to stay long enough for to understand it.


A classic online RPG returns, but the competition leaves it feeling dated. The single-player adventure, meanwhile, is a tragic Jap-RPG disaster.