If you’ve already got PES 2020 and have found other means to update the squads and kits, there’s very little of note here. The changes are minimal and this edition is likely just for those who decided against picking up the previous entry. But if a cheaper version of PES has you interested this is a great starting point. Yes, there are plenty of issues with the modes, commentary and AI but most of that just fades into insignificance when you’re actually playing a game. Until the next-gen version arrives next year, this is the best representation of football you’ll find.

PES 2021 isn’t a new game, in fact, Konami is very open to the fact this is simply a ‘Season Update’,

Releasing a yearly update with the new teams, players and a few graphical changes has been a request from many yearly football sim players for what seems like forever, with many claiming the usual releases are little more than that anyway. So, while it works on a true next-gen version of PES for next year that’s exactly what we get here.

You’ve got updated squads, new kits for the small selection of licensed clubs, a smattering a new boots and some updated player and manager faces. There’s also the very limited Euro 2020 mode that launched as free DLC for PES 2020 and some minor gameplay tweaks that actually make this a better game of football than its predecessor. For the £25 asking price, and especially if you didn’t pick up PES 2020, this is a surprisingly good deal.

Even if, like me, you’re a die-hard FIFA fan, I doubt you could say with a straight face that EA’s offering gives a better semblance of the beautiful game than PES. It just simply doesn’t. PES is the king when it comes to gameplay, with a far more realistic and rewarding game that doesn’t feel like a number of canned animations sewn together. Your decisions make a difference in PES 2021 and there’s a feeling of satisfaction when you join multiple passes together and see the ball fly into the top corner that is absent elsewhere. 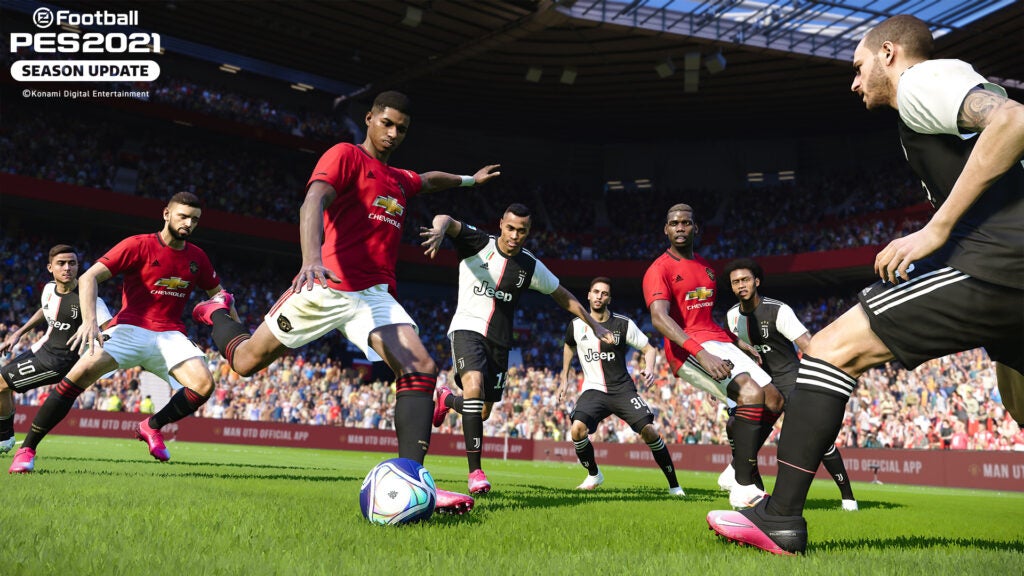 If you played PES 2020 then the gameplay is 99% the same here. The ball physics remain excellent and the slightly slower speed at which matches happen not only feels more realistic, but it lets you actually create nice build-up tactics rather than just bombing down the wing with Jadon Sancho. The general animations are excellent and every touch, knick from a defender or shot just about feels unique.

If you played hours upon hours of PES 2020 you’ll likely notice some of the small gameplay improvements. Movement feels a bit more fluid, passes and through balls seem to feel better and I still love being able to manually move players off the ball. All in all it’s mostly a pleasure to play whether you’re on the attack or hunkering down at the back.

Whereas in FIFA defending can be infuriating, here it’s far more a case of being patient and timing things correctly. The first few games I was conceding numerous goals, but after some practice and relearning the nuances of PES I was back to controlling the game.

A big downside with this Season Update mantra is that gameplay issues from PES 2020 haven’t been fixed. My biggest issue is the AI of the players, which all too often leaves them wandering randomly around or not moving towards the ball until it lands at their colourful Nike boot. I found myself having to wait for the ball to arrive before I could do anything meaningful. These bouts feel much more obvious when the majority of the gameplay feels very real. 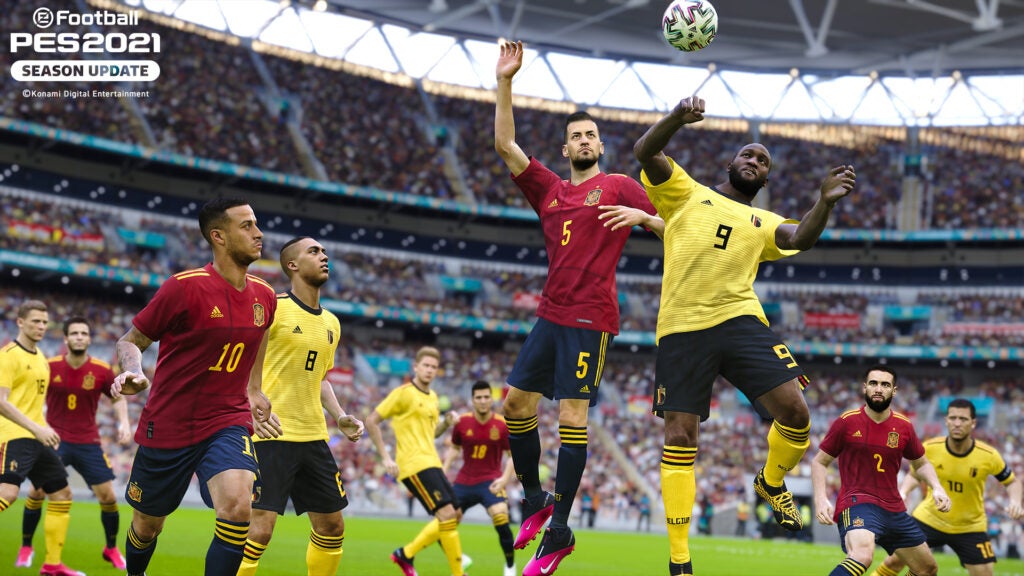 Referees lack common sense too, frequently giving fouls for the lightest of touches and often deciding against carding a player for what feels like two-footed lunges. And don’t get me started on the commentary – do yourself a favour and turn it off immediately.

Back out of a game and into the menus and PES 2021 feels archaic. There have been no overhauls to the menu structure, tactics screen or in any of the modes. You’ve got the Euro 2020 mode for the tournament that was shunted until 2021, however this was available in PES 2020 and it lacks the atmosphere you’d expect from a mode dedicated to one of the biggest international tournaments around.

We’ll have to wait until next year for Master League to hopefully get an update and I had forgotten how frustrating the career mode here is. PES 2021 adds in a few new manager cutscenes and you can choose a real-life manager to control, from the likes of Ryan Giggs and Pep Guardiola. Actually get stuck into trying to manage a team and the experience quickly becomes a pain.

The awful menu structure is tiring and the transfer market remains broken. I was quoted a mere 60 million to sign Sancho, however he wouldn’t sign unless a meagre 50 million release clause was added into his contract. Football just doesn’t work like this and it happened with every player I attempted to capture. There are a bunch of annoying cutscenes too that add nothing to the experience. It’s a similar story with MyClub, the rival to FIFA’s popular Ultimate Team mode. While it’s nice collecting some classic players, the overall experience does little to keep you invested once you’ve built up a good enough team. 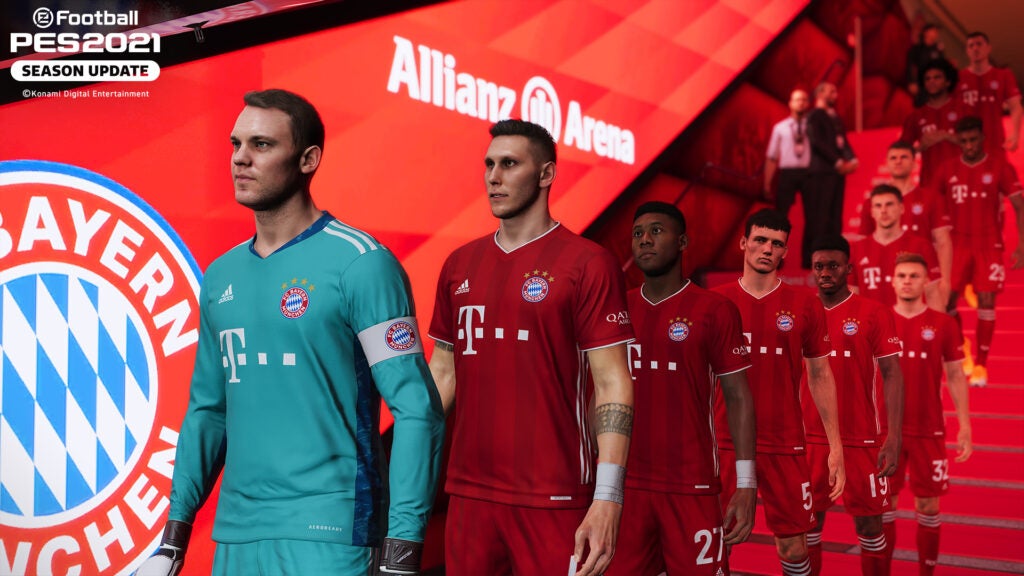 I won’t drag PES 2021 too much for the situation it finds itself in with licenses, because I feel this is an area where Konami is never going to match EA. The clubs that are licensed are done very well, with Man United’s player models looking excellent and Arsenal’s new kits looking eerily accurate. Venture to a match between, say, Leicester City and Leeds United and the experience falls flat. Yes, there are ways of circumventing this with ‘Option’ files, however this remains unavailable for Xbox players.

If you’ve already got PES 2020 and have found other means to update the squads and kits, there’s very little of note here. The changes are minimal and this edition is likely just for those who decided against picking up the previous entry.

But if a cheaper version of PES has you interested then this is a great starting point. Yes, there are plenty of issues with the modes, commentary and AI but most of that just fades into insignificance when you’re actually playing a game. Until the next-gen version arrives next year, this is the best representation of football you’ll find.