Despite its size and design, the Acer is relatively affordable. The Nvidia’s GeForce GTX 1050 Ti featured here is one of the more modest GPUs from the mobile Pascal roster, offering 768 stream processors, 4GB of memory and a 1,493MHz core clock. That’s enough grunt to run games at 1080p – but that’s about it.

The Acer’s Shadow of Mordor result of 59fps is good, but the Asus machine blasted beyond 60fps. And while the Predator scored 6688 points in the 3DMark: Fire Strike test, the Asus hit 8456 points. 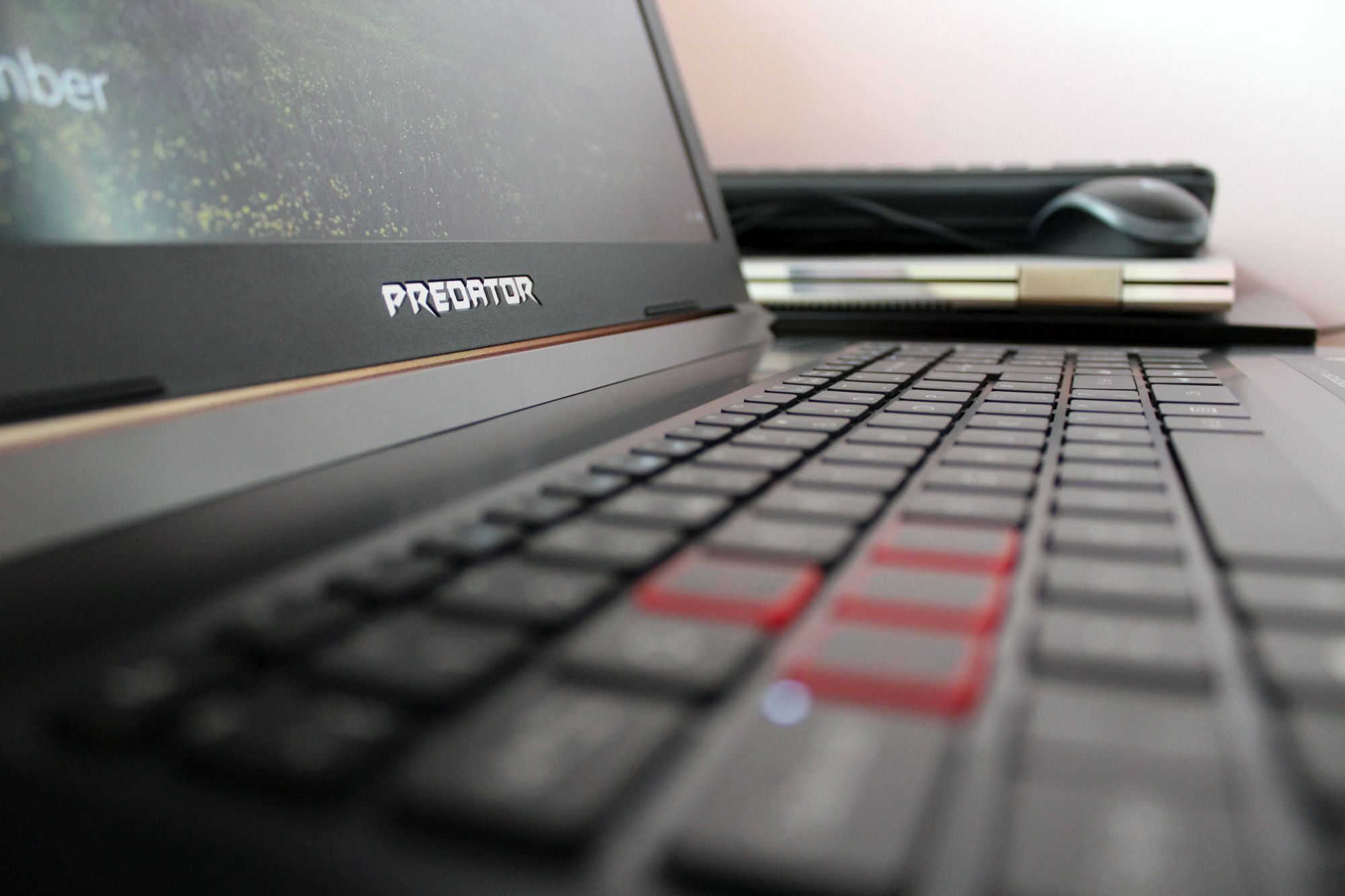 The Acer’s scores are decent nonetheless, and the PredatorSense app can overclock the GPU with two 50Hz boosts – the first is called Faster mode, while the second is dubbed Turbo.

The first option boosted the Fire Strike result to 6955 points, while the second level took that score to 7134 points. Faster mode added a single frame to the Acer’s Shadow of Mordor result, while Turbo mode took the original 59fps average to 62fps.

It’s hardly ground-breaking, but it’s a welcome bit of extra power. The Predator didn’t give me any thermal headaches, either – no matter which GPU mode I used, the graphics core never rose beyond a solid temperature of 68°C.

Indeed, the Acer’s thermal performance was consistently good. The body of the laptop became only slightly warmer during stress-tests, with the majority of heat vented from the rear, and the processor’s peak temperature of 87°C is fine. Noise levels were okay, too – a tad louder than the Asus, but still quieter than most gaming machines.

The processor used here is the familiar Core i7-7700HQ, which has four Hyper-Threaded cores and a 2.8GHz stock speed. It’s paired with 16GB of dual-channel memory, and it’s a step up from the Asus’ Core i5 chip.

The better processor helped the Acer return Geekbench single- and multi-core results of 4503 and 13,547. Both results are comfortably ahead of the Core i5-powered Asus, but the Core i7 remains a little redundant in this machine – neither chip is going to cause games bottlenecks or problems with general-purpose computing. I’d have preferred an i5 in the Acer, with more cash for the GPU.

The 128GB Kingston SSD ran through read and write tests with speeds of 506MB/sec and 210MB/sec – both figures behind the Asus. Still, they’re better results than any hard disk will manage, and the Acer is still responsive in general-purpose use. 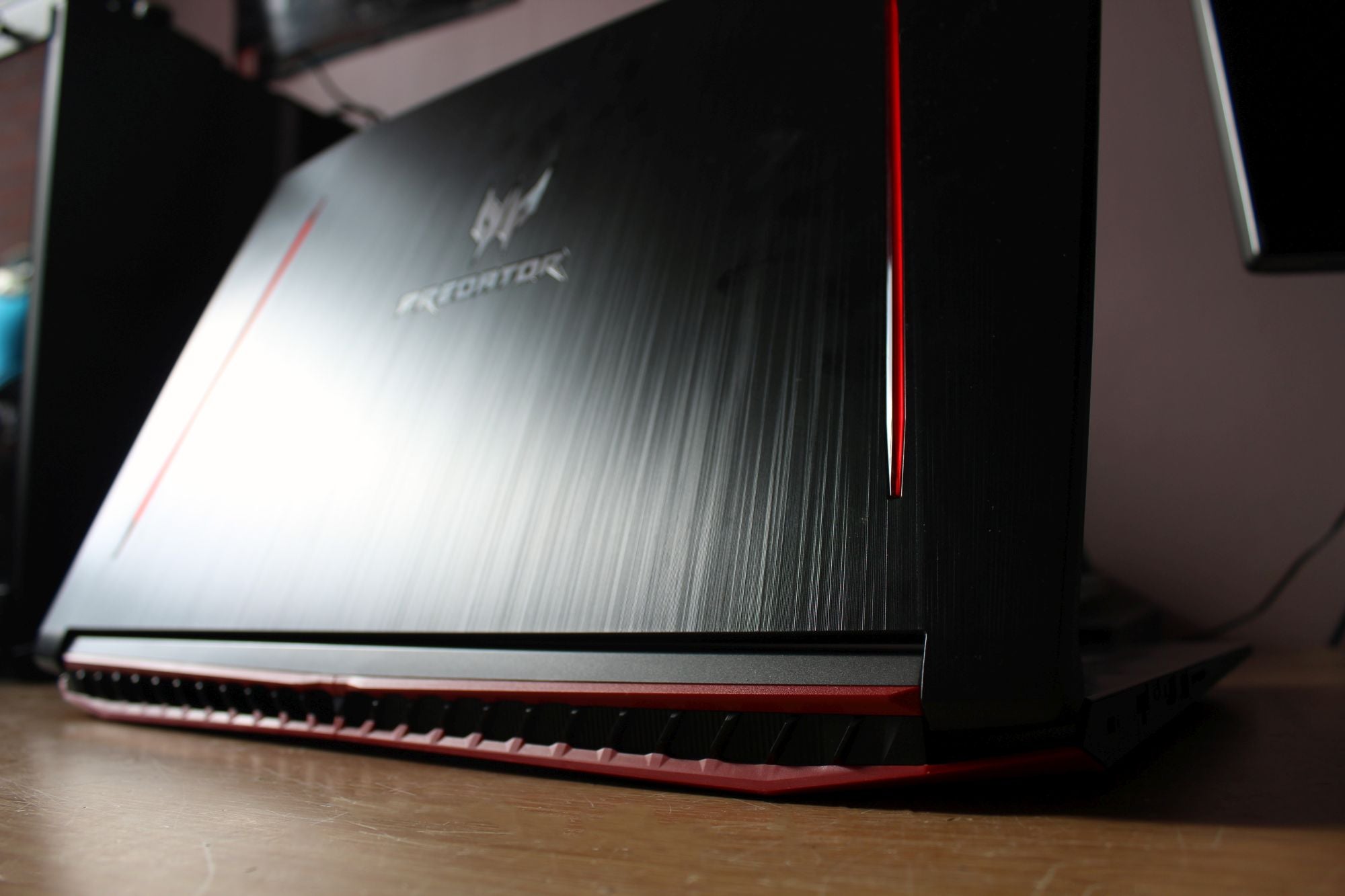 The final surprise from this machine is its battery life. In the low-intensity PowerMark test, it lasted for a couple of minutes beyond five hours – a great result for a gaming laptop, and almost 90 minutes more than the Asus.

That’s good, but the Acer still only delivered about an hour in a full-brightness gaming test – a result that saw it back on a par with the Asus and almost every other gaming laptop.

At the bottom end is the NH.Q2MEK.005, which costs £999 since it has half as much memory as the other Acer machines and the Core i5 processor.

Why buy the Acer Predator Helios 300?

Acer’s latest gaming laptop is an impressive and well-balanced machine. The GTX 1050 Ti has ample power for 1080p gaming, there’s a Core i7 processor, and its battery life is better than most gaming machines. The screen is solid, and its design is attractive.

Ergonomically, it’s middling, but most gaming laptops fall foul of the same issues.

It’s a shame, then, that it’s scuppered by outside forces – most notably the Asus ROG Strix GL702VM. That system offers similar design and ergonomics alongside an Nvidia G-Sync screen. Crucially, it has the edge in gaming because of its GTX 1060 GPU, and it’s a couple of hundred pounds cheaper to boot, although that machine was made at a time when PC component prices were lower and more stable. As the GL702VMs gradually run out of stock, the Helios on review here will look like a good deal.

The Predator is a good laptop that doesn’t really put a foot wrong, but there’s no compelling reason to buy it when the Asus is faster in games and lighter on the wallet.