A neat improvement on the original, the PerfectDraft Pro is compatible with the same range of beers as the original. This time, though, it adds smart app control, variable temperature settings and smoother pouring into the mix. The overall result is the best beer machine for the best beer system.

Join the waiting for the PerfectDraft Pro at Beer Hawk

The Philips PerfectDraft is a top-quality product, delivering that true pub-at-home experience – with only one minor problem: it cools all beer to 3ºC, regardless of type. The PerfectDraft Pro (no longer manufactured by Philips) is here to address that issue, offering variable temperature control, Smart Pour tech for perfect pouring, a smart app and faster cooling. Those with the original may struggle to justify buying the new machine; however, if you drink a variety of beers then this is the ultimate machine to buy.

Like the original PerfectDraft machine, the PerfectDraft Pro is best bought from BeerHawk. You can buy all of the kegs from here, too, so it makes sense to buy everything from one place.

Also like the original, the new machine takes the 6-litre PerfectDraft kegs. That’s good news: there’s no two-tier system, with some beers only available for the new machine. Here, any keg can fit into any machine.

The size of the kegs means that you’ll get just over 10 pints of beer a turn, and each keg lasts for up to 30 days once opened. I feel that this is a good compromise: there’s enough beer for a small gathering, or to accommodate a single person over the course of a couple of weeks.

At the time of writing, there’s a choice of 48 beers, ranging from bigger supermarket brands (Bud and Stella) to more inspired choices, including Schneider’s Bayrisch Hell, Tiny Rebel Cali Pale and BrewDog Punk IPA. In my experience, the choice available will happily cover most tastes, while also being better than the universal 5-litre kegs that you can pick up in supermarkets.

Kegs range from around £30 to £40, which at the lower end amounts to around £2.80 a pint. However, once you’ve bought your first kegs, you can return empty units to BeerHawk for a £5 credit into your account towards future purchases. That’s good for two reasons: your future beer purchases will be cheaper, and the kegs are recycled and reused, which is good for the environment. I’m not sure if the argument “the more I drink, the more ecological good I do” holds true – but I’m sticking to it.

While the keg and beer range on offer with the PerfectDraft Pro may be the same as the previous model, the system has been redesigned to deliver an improved beer-drinking experience. Most importantly, the static 3ºC cooling has been replaced with a thermostat, so different beers can be kept at different temperatures.

The lower limit is set as standard at 3ºC with a higher limit of 7ºC. Unlock the higher temperature range selection in the app and the lower limit is reduced to 0ºC with an upper limit of 12ºC. While you can set temperatures manually from the front of the machine, it’s easier to hook up the PerfectDraft Pro to Wi-Fi and use the app instead.

The app offers the same controls that appear on the front of the machine, but also a facility to search out the beer you’ve bought and have the machine set to exactly the right temperature.

This machine can cool down a keg to its set temperature in just 10 hours, a full two hours quicker than the original. If you have time, pre-chilling kegs in the fridge – never put them in the freezer – will shorten the job.

From the app and the front of the machine, you can check the freshness indicator: it counts down automatically, so you can see quickly if your beer has gone past its best.

I’m hoping that the new temperature range will open PerfectDraft up to more ales. At the moment, the selection is geared towards beers that are best served relatively cold: lagers and IPAs.

The new machine has overhauled the way that kegs are installed, too. They still need the fresh plastic spout clipping into place, but this goes inside a holder that clips over the top of the keg.

Sliding the keg into the machine is much easier than with the original – and I also prefer the single door, rather than double, of the Pro machine.

The drip tray is better here, too: it slides away when it isn’t in use, and pulls out easily for cleaning.

The PerfectDraft Pro also has a very slightly different tap. The new one features two magnetic discs, one at the front and one at the back. Four are in the box, but special editions are coming.

PerfectDraft kegs have an internal aluminium bag that holds the beer, with the machine using a compressor to push air into the keg to maintain pressure without affecting the beer. There’s no faffing about with CO2 canisters, as is the case with the Salter Pro Universal Chilled Draft Beer Dispenser.

If there was one minor issue with the original machine it was that beer could be a bit foamy when poured. Smart Pour tech addresses this issue in the new model, to a degree. Overall, I found that the PerfectDraft Pro poured better, but it still works best with a wider pint glass than a thinner pilsner glass.

Full opening of the tap poured a perfect beer every time, with a smooth head of the type you’d normally only get in a pub; this just isn’t something you can replicate if pouring from a bottle.

I found that consistency was improved here, too. Pouring an IPA, it was served at 5ºC, bringing out its flavour while keeping it refreshingly cold; 3ºC is a little too cold for this kind of beer. Conversely, a Pilsner was best served at an ice-cold 3ºC.

There’s a bit of noise from the cooling fans, although you’d struggle to hear the PerfectDraft Pro in a normal room. The machine is a little louder when pouring beer, particularly when the compressor kicks in. However, the sound here is more refined noise, not the jarring and whirring noise that the original made.

Join the waiting for the PerfectDraft Pro at Beer Hawk

If you want the best-quality beer poured at the right temperature, similar to that served in a pub, then this is the machine for you.

If you’re more of an ale drinker, then there isn’t much choice at the moment. Those with an existing PerfectDraft machine may find it hard to justify the upgrade.

Until now, the original PerfectDraft machine has been the best beer dispenser: it’s easy to use and maintains temperature over the keg’s life. The Salter Universal Chilled Draft Beer Dispenser is fiddly to use, since it needs CO2 canisters for some kegs, only cools for up to 21 hours, and has to be filled with water.

In my opinion, the PerfectDraft Pro surpasses both machines. It’s easier to use than the original, pours more easily, and the variable temperature selection (either from the machine front or through the app) let me serve beer at the right temperature, regardless of type. My one wish now is that more ales become available.

If you have the original and don’t use it that often, you may struggle to justify an upgrade. Those buying new, or folk who like to experiment with lots of beer types, will love this machine. 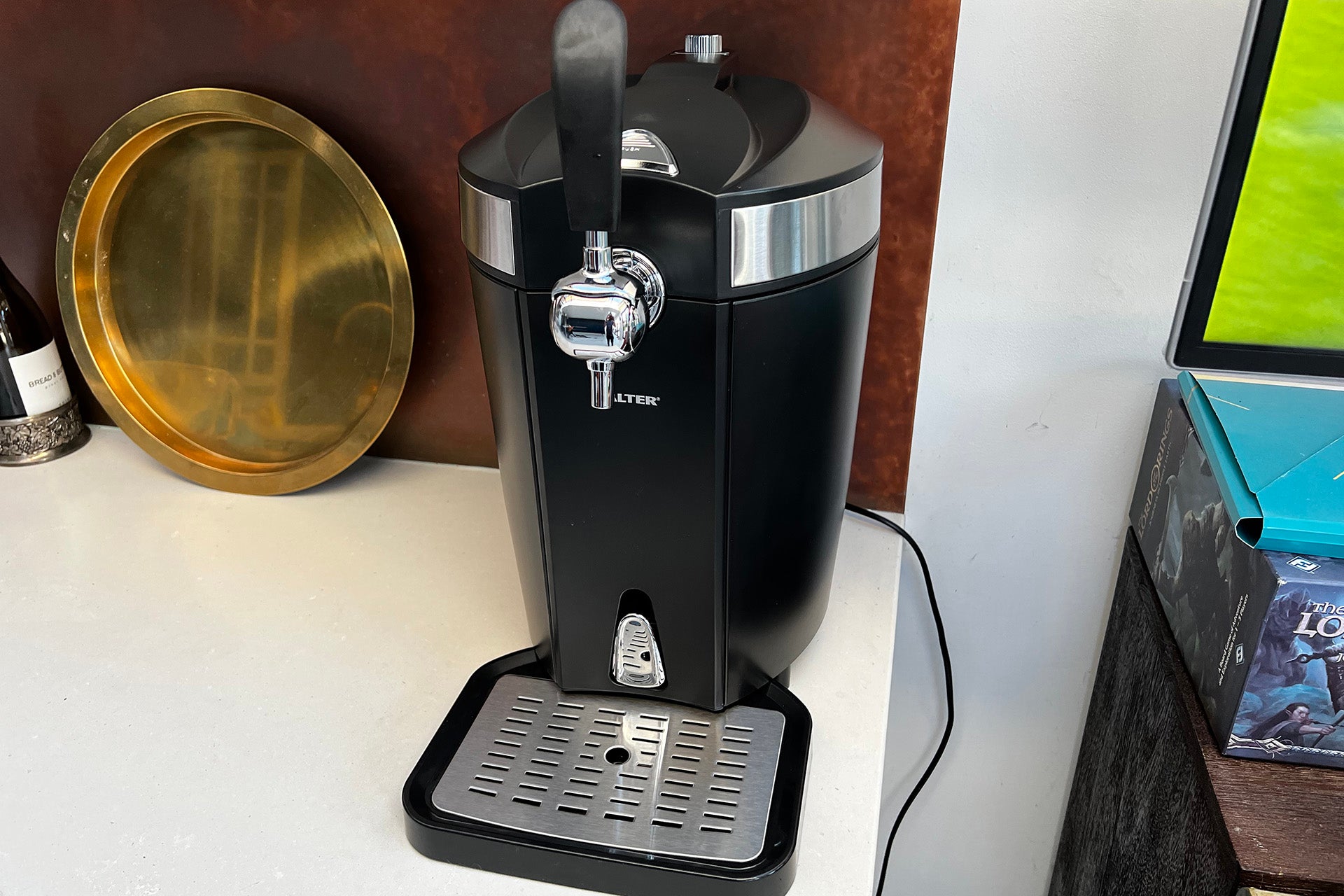 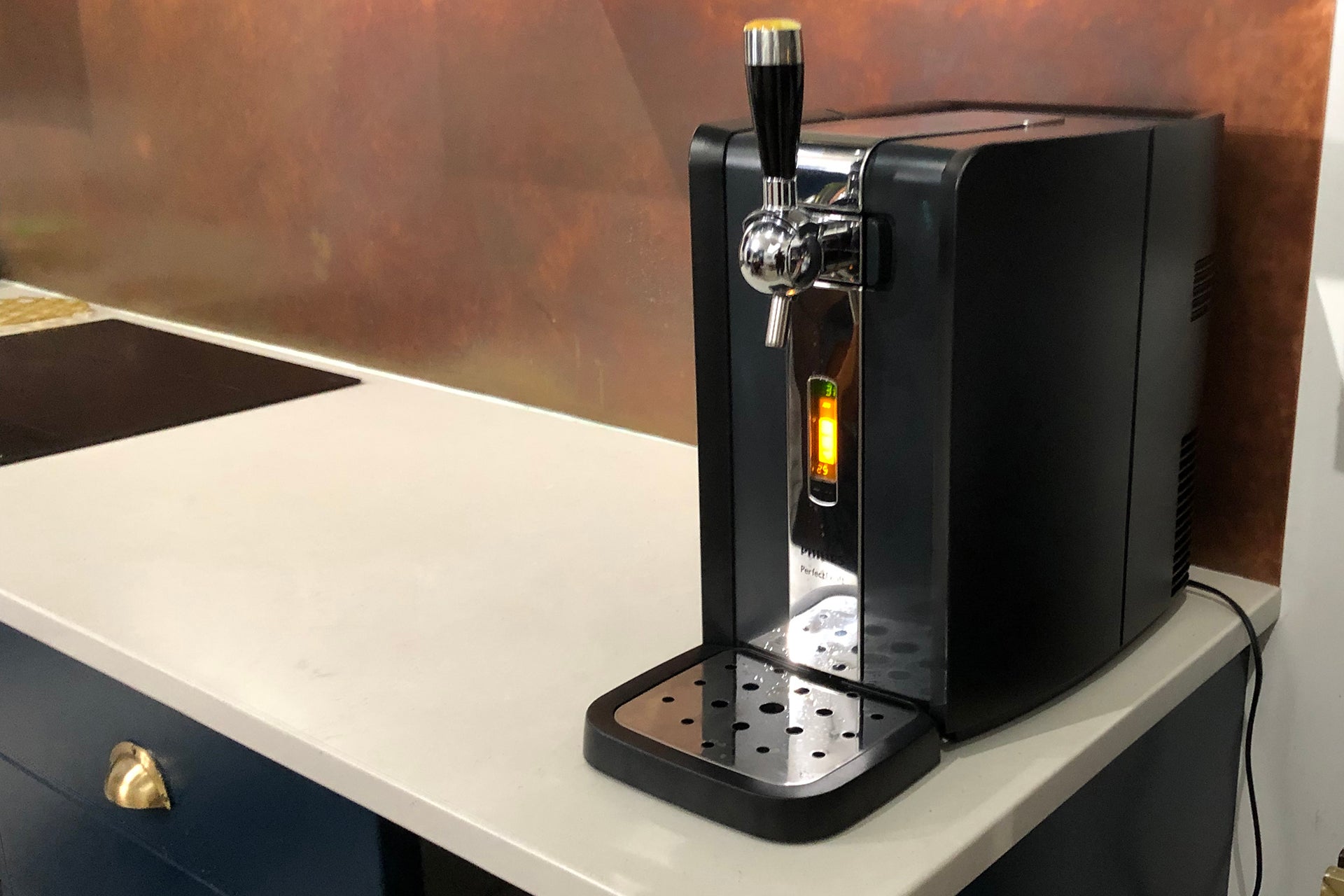 Is the PerfectDraft Pro compatible with the same kegs as the original?

Yes, it will work with the same 6-litre kegs.

How much money do you get for returning a keg?

You get a £5 credit for each keg returned.