Perfect Privacy is one of a handful of VPN providers that has been shown to genuinely keep no connection logs and provides a wealth of security features. However, it’s not consistently fast across its European endpoints and its US connections are painfully slow. It’s also not cut out for region-shifting streaming media.

Perfect Privacy isn’t as glossy as some of its rivals and its range of endpoints is relatively small, but the Swiss company is one of very few VPN (virtual private network) providers that’s been shown to have a genuine commitment to its no-logging policy. When Dutch police seized two of its servers in 2016, no logs were found.

Perfect Privacy presents a simple list of its endpoint server locations across 24 countries, with a button next to each entry that allows you to connect to and disconnect from each one. Each server’s maximum bandwidth is listed alongside and, once you’ve connected to Perfect Privacy’s network, you can see how much of that is currently being consumed. Whether currently connected or not, you can ping all the servers for their response times and these two bits of information offer a fair predictor of the performance you can expect from each endpoint location.

Perfect Privacy integrates with the Windows firewall, which can result in some install and launch-time issues if you have it disabled or if you have complex networking features configured via a customised hosts file.

The service has very flexible kill switch settings to help ensure that you don’t accidentally send any traffic along unencrypted routes if the VPN connection goes down. By default, it’s only active when you connect the VPN, but you can also set it to be active either whenever Perfect Privacy’s client is open or permanently, which is a major advantage for people for whom privacy is of critical importance.

Other advanced settings allow you to use “cascading” connections involving multiple VPN endpoints, a Stealth mode to attempt to conceal the fact that you’re using a VPN at all – useful in countries where their use is restricted by law – and firewalling out your local router and network devices, as well as more typical advanced options that allow you to select connection and encryption protocols. 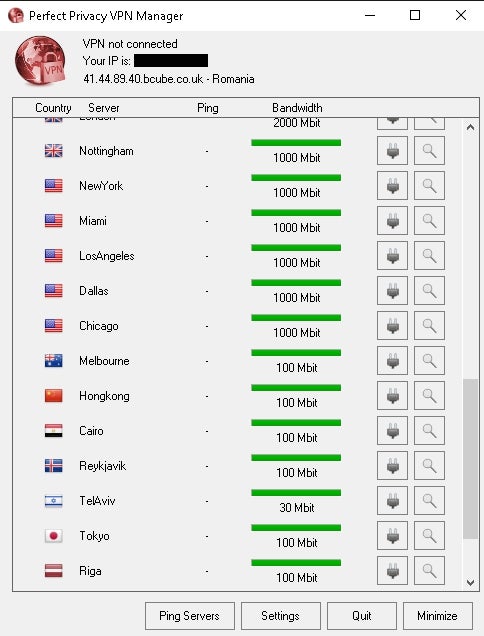 Perfect Privacy produced some of the slowest download speeds of any of the services in our latest round of testing. UK endpoint performance was poor compared to previous months, at 51.12Mbps (6.39MB/s) via HTTP and 63Mpbs over FTP on a net connection that achieves speeds of over 600Mbps without a VPN.

You probably won’t have much luck using it for video streaming either – we could watch Shudder’s U.S. services but had no joy this month with Netflix. As usual, All 4 and iPlayer in the UK were non-starters.

Perfect Privacy is one of the most expensive VPN services around, priced at £11.62 per month, £107.37 per year, £192.34 per two years. Even its most economical two-year subscription works out at £8.01 per month – more than many rivals’ monthly subscriptions.

While the service has an excellent privacy pedigree and an almost unique level of granularity in the control you get over its settings and security features, letting you use an unlimited number of devices on a single account, its performance and price mean that it’s not ideal for the vast majority of users.

Perfect Privacy is one of a handful of VPN providers that has been shown to genuinely keep no connection logs and provides a wealth of security features. However, it’s not consistently fast across its European endpoints and its US connections are painfully slow. It’s also not cut out for region-shifting streaming media.

As its name indicates, this service focuses specifically on privacy, but rivals such as Private Internet Access and ExpressVPN provide comparable security, with better performance, at lower prices.