Let me get something straight, Goldeneye on the N64 is the Daddy of all console based first person shooters. Now there’s bound to be loads of Halo fans out there who think I’m insane, but superb as Bungie’s masterpiece is, Goldeneye was, and still is the benchmark. In fact Goldeneye was so good, that N64 owners practically counted down each day until Rare released another Bond classic, but unfortunately it never came.


You see after the phenomenal success of Goldeneye, James Bond became super-cool once more and Rare lost the licence to another developer. The upshot of this was that Rare needed to create its own hero (or should I say heroine) – the result was Joanna Dark, a sultry and sexy secret agent who was more than a match for Lara Croft. 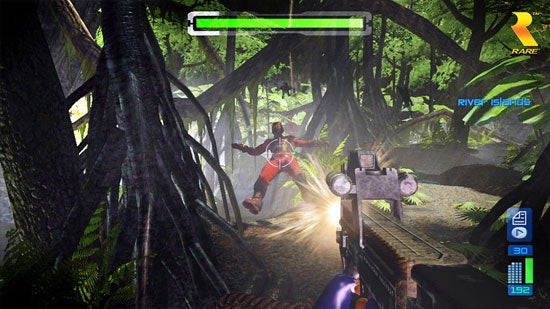 Perfect Dark was a superb first person shooter and in some respects it even eclipsed Goldeneye. The fact that you needed the N64 expansion pack to play it in the first place, meant that the visuals were certainly a cut above Mr Bond’s efforts. Like Goldeneye before it, Perfect Dark employed a mission strategy whereby the harder the difficulty level the more objectives you needed to complete. This drove you to play the game through several times and complete it on every difficulty level.


When Nintendo launched the GameCube, Perfect Dark fans like myself couldn’t wait for Rare to set Joanna loose on the new platform, but it never happened. Instead Microsoft bought Rare and Joanna Dark missed out on an entire generation of console hardware. 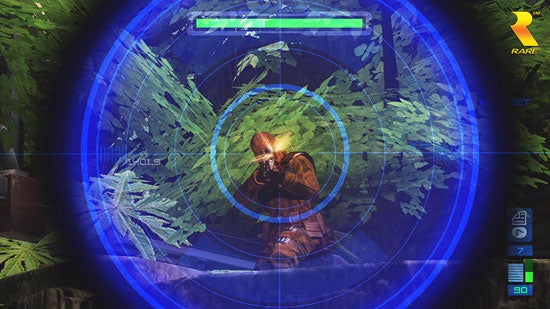 But now, with the launch of the Xbox 360 Rare has unleashed Joanna once more and produced one of the best launch titles in the shape of Perfect Dark Zero. Set before the original game, PDZ sees Joanna working as a freelance operative with her father – she hasn’t been recruited by the Carrington Institute yet but the storyline heads towards that end from the outset.

Like the original Perfect Dark and Goldeneye, PDZ is split into different missions where specific objectives need to be completed – some of them primary, some secondary. The gameplay is essentially still linear, but having the option to fulfil or ignore the secondary objectives throws a bit of variety into the mix. 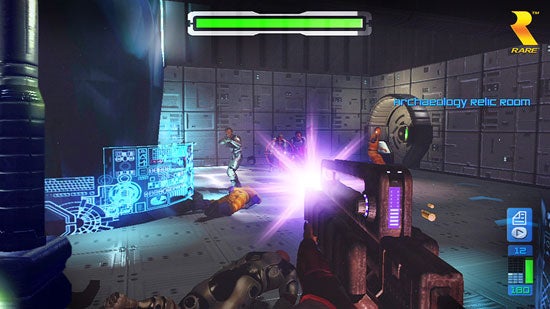 There’s been a lot of comment on the Web about the disappointing graphics in PDZ, and if you’re only going by the screenshots you could be forgiven for thinking this. However, in reality the visuals are a mixed bag – some of the graphics do look a bit lacklustre and retro, but some of the visuals are truly staggering. There are levels and areas in PDZ where I completely forgot what I was supposed to be doing and just stared at the amazing lighting or superb textures – mundane scenery such as brickwork had me stopping in my tracks; it looks that good.


I had the pleasure of meeting up with the guys from Rare last week to have a chat about PDZ. Rare confirmed that it had employed Paralax Occlusion Mapping to create the stunning textures on the walls. This is a technique that ATI was making a big fuss about at the Radeon X1000 launch, and judging by the results seen in PDZ I can understand why. Rare has also used tone mapping to create HDR effects in the game, although it didn’t seem to be as apparent as the HDR seen in recent PC games. 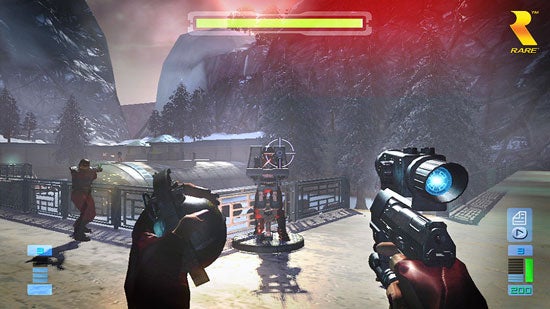 But like I said, the graphics are a mixed bag – while some of the scenery looks amazing, the character models just don’t look very, well, next generation. The inhabitants of the PDZ world look a bit too cartoon like, while the faces seem, well, drawn on. Even the movement doesn’t seem particularly convincing, except when you shoot someone of course – shoot a guy in the knee and he will drop down clutching at his knee, he may even blurt out “She shot me in the knee!” just to hammer the point home.

PDZ makes excellent use of the X360 controller. The default configuration is the same as Halo, so most players should just fall right into it without wasting any time. I was particularly impressed with the analogue triggers on the new controller – if you’ve got a weapon with a telescopic sight on it the amount that you pull the trigger dictates how far you zoom; this sounds like it could be tricky to get the hang of, but in practice it wasn’t at all. 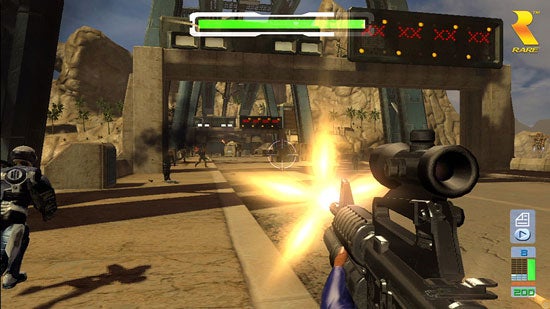 But there is one aspect of the control method that’s been driving me mad. It seems that despite being expertly trained in armed and unarmed combat, Joanna is physically unable to jump! For some reason Rare has decided that you don’t need to jump in PDZ, which is frustrating beyond belief. If you’re used to playing FPS games, you will, like me, find yourself walking up to railings and boxes and just expecting to be able to jump over or onto them – but you can’t.


The AI of the computer controlled characters is also a bone of contention. There are times when a group of enemies will pin you down while their mates try to flank you, leaving you thinking “Wow this AI is good”. But then in other situations enemies appear mind numbingly stupid and will happily just run into your stream of gun fire if your aim is a little off. 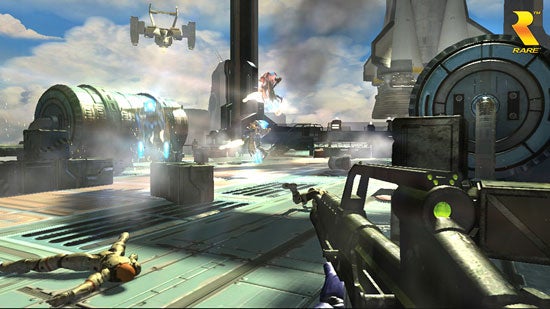 Taking a leaf out of Halo’s book, PDZ only lets you carry a limited number of weapons – to be fair PDZ actually does this better than Halo. Whereas in Halo you can carry any two weapons, in PDZ the amount of weapons you can carry is down to their physical size – a large machine gun will take up all your weapon space, or you could carry an SMG, pistol and a grenade instead, it’s all a matter of balance. Whatever weapons you end a level with will be available in your inventory – you can choose your load-out before you start each mission. 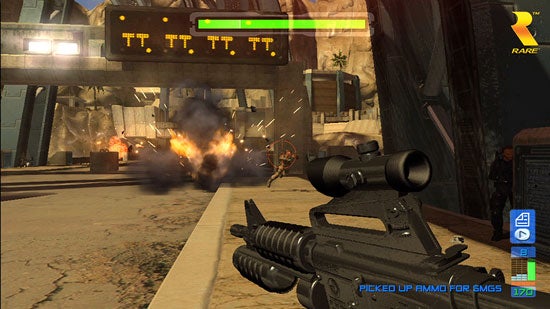 There are vehicles to play with as well. The hovercraft is fun and reminded me of the warthog in Halo, and like the warthog you need a gunner with you to make the most of it. The jetpacks are pretty cool too, allowing you to fly around the level while shooting enemies. Although the vehicles are worked into the solo game, it’s in the multi-player scenarios that they really come into their own.


Talking of multi-player, Rare has put a lot of effort into this area and the results are very impressive. I’m a big fan of co-operative play in FPS games and have spent many hours playing both Halo and Halo 2 in split-screen co-op mode. For me, the biggest disappointment with Halo 2 was that you couldn’t play co-op over Xbox Live – thankfully Rare hasn’t made that mistake. In PDZ you can arrange a co-op session with one of your friends on Xbox Live, or even just join in with a total stranger – whichever way you do it, playing PDZ in co-op is even more fun than playing solo. 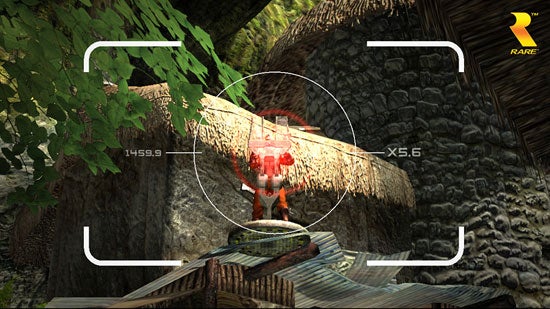 Rare has also worked hard on the non-co-op side of multi-player, and you’ll find a decent amount of options for some online fragging. Obviously you’ve got standard deathmatch scenarios, but you can also play team based games in a similar style to Counter Strike. Rare told me that it will be releasing extra multi-player maps very soon, and there will even be single player content available for download too.


Despite the name, Perfect Dark Zero is not perfect, but that doesn’t mean that it isn’t a great game, because it is. Even with my gripes I can’t help but love PDZ, because the moments of genius still outweigh the moments of frustration.


I’ve been waiting a long time for Joanna Dark to make a second appearance, and on the whole Perfect Dark Zero makes the wait seem worthwhile. I’m not going to pretend that PDZ doesn’t have faults because it does, but I have still found myself playing this game more than any other launch title.


The single player missions are challenging enough to keep you playing, while Perfect Dark fans like myself will want to see how Joanna ends up at the Carrington Institute.


With Kameo, Rare proved that it could make a game with unparalleled visuals, but distinctly lacking gameplay. With Perfect Dark Zero Rare has managed a far better balance. Ultimately, if you’re thinking about what games to pick up with your X360, make sure that PDZ is on your list.