Considering that Pentax is one of the original “Big Five” camera companies (along with Canon, Nikon, Minolta and Olympus), and has been making digital cameras for over a decade, it’s rather surprising that last year’s X70 was the company’s first foray into the superzoom market. It did pretty well for a newcomer though, with a state-of-the-art 24x zoom camera with a good if unadventurous range of features. Pentax has obviously got a taste for it now, because it’s just updated the design as the new X90. 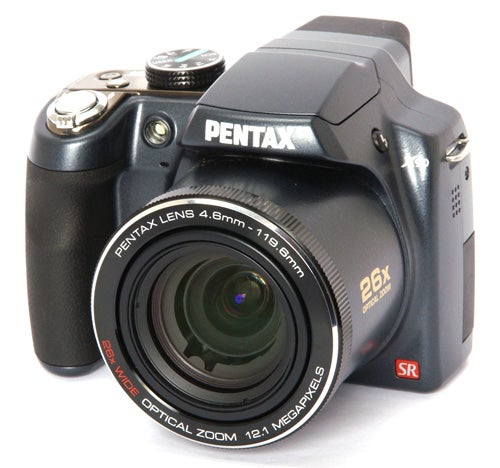 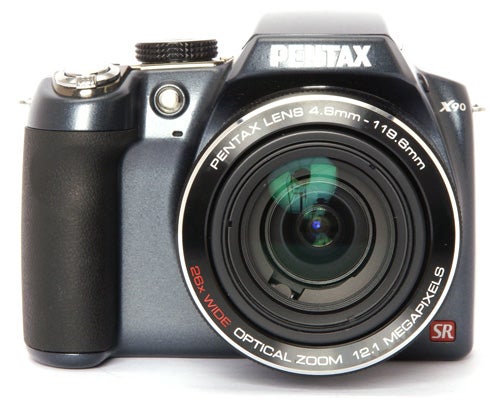 Pentax is up against some well established competition in the superzoom market, with models like the new Nikon P100 (£294), the Samsung WB5000 (£284), the superb Fuji S200EXR (£282) and of course the ever-popular but soon to be replaced Panasonic FZ-38 (£220), not to mention an ever-increasing number of long-zoom compacts. The X90 can certainly match its main rivals in terms of specification, and is currently selling for around £274, which is fairly competitive.

The X90 offers plenty of features, but most of them are exactly the same as the X70. Externally it’s hard to tell the two cameras apart. The overall body design is almost identical, apart from the X90’s slightly longer lens barrel with a totally cosmetic knurled ring around the end of it. The colour is different too; where the X70 was available in matt black only, the X90 is an attractive blue-grey colour with a slight crackle finish. The the X90 is relatively light and compact for a top-end superzoom camera, measuring 111 x 84.5 x 110mm, only slightly larger than the X70. The new model is also slightly heavier, weighing 428g including battery and memory card, 10g more than the X70. 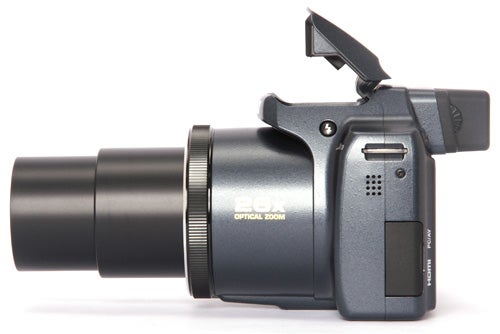 Other than that not much has changed. The build quality is still up to Pentax’s usual high standard, with tight panel joins and a strong metal hinge on the battery/card hatch. The large comfortable handgrip has a textured rubber surface, and there is a textured rubber thumbgrip on the back. The control layout is well designed with large clearly labelled buttons, and the camera is very comfortable and pleasant to handle. The LCD monitor is nice and sharp, and bright enough to work well outdoors even in bright sunlight. It has a good angle of view in every direction except downwards, annoying really because that’s one direction you need a wide view, for shooting over obstacles. 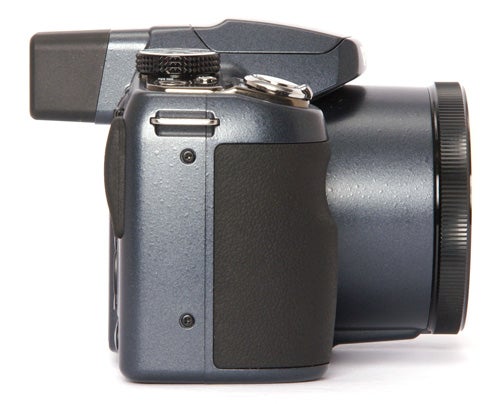 The viewfinder is pretty good too, but as usual with electronic LCD viewfinders it’s not really sharp enough for accurate manual focusing, despite the automatic magnification in MF mode. Manual focusing is fairly poorly implemented, with stepped focusing controlled via the D-pad, rather than continuously adjustable focusing controlled by, for instance, the control wheel handily mounted on the back of the camera, or that non-functional ring on the lens barrel.


Other features include manual exposure modes, with aperture priority, shutter priority and full manual exposure, the settings adjusted by the control wheel just above the thumbgrip. The wide aperture range and fast maximum shutter speed of 1/4000th of a second do offer a fair degree of creative control for those who want it. Also useful is the impressive 1cm macro mode, allowing extreme close-ups of things just in front of the lens. 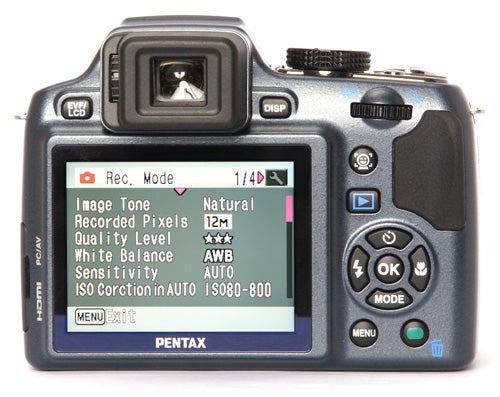 Some features have been upgraded, particularly the video mode, which can now shoot at 1280 x 720 pixels and 30fps, with mono audio recoded via a microphone mounted beside the lens barrel. Unfortunately optical zoom cannot be used while recording, and the sound quality isn’t exactly brilliant. The microphone is very prone to wind noise, and is also non-directional, picking up noises behind the camera just as loudly as those in front. The sensor shift IS doesn’t operate in video mode either, just the usual electronic stabilisation.

The X90’s overall performance is pretty good for a superzoom camera. It starts up and is ready to shoot in just under three seconds, and in single-shot mode it has a shot-to-shot time of also just under three seconds, which isn’t exactly sparkling performance but is a full second faster than the X70. In continuous shooting mode it can maintain approximately 1.25fps, which is actually pretty quick for a 12MP camera. It also has three burst modes of varying speeds, but since there is no audio cue to let you know when a picture is taken, and the monitor remains blank, these aren’t really much use. 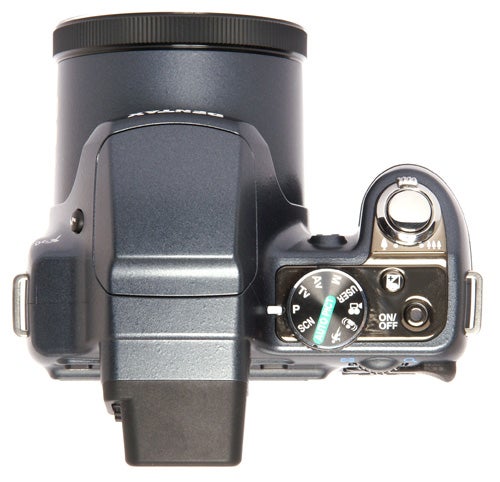 The autofocus system also seems to have had a bit of attention during the upgrade process. It is still very accurate and reliable, and even works well in low light, but it is now much quicker, focusing in a fraction of a second. This is a big improvement, and significant boost to the X90’s performance.


Also vastly improved is the camera’s battery duration. The 1250mAh Li-ion cell powering the X90 is over 25 percent higher capacity than the battery in the X70, and as a result it can keep shooting a lot longer. I was able to shoot around 220 shots before the battery indicator dropped to one bar and turned yellow, indicating that it needed a recharge. It kept shooting though, managing 270 shots before it finally ran out, exceeding the manufacturer’s claimed 255 shots.


There have been a few changes to image quality too, but the X90 still has some room for improvement in this area. The X90 has a new lower sensitivity setting of 80 ISO and appears to have a new noise reduction system. At lower sensitivities the image quality is generally good with no visible noise, but the results tend to look a bit over-processed. By 400 ISO the noise reduction is blurring out fine detail, and at 800 and 1600 ISO noise is a real problem. 3200 and 6400 ISO are available but only at 5MP resolution. 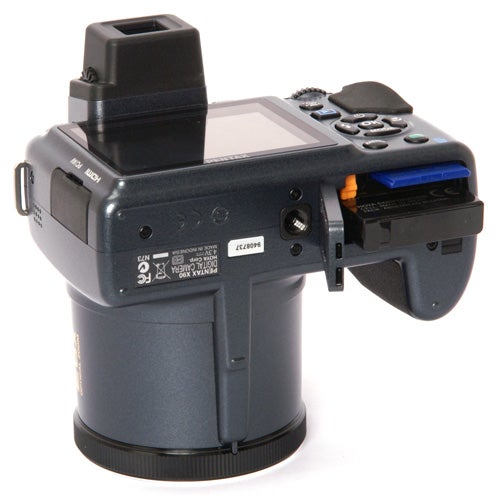 The new lens however is excellent. Pentax optics have a very good reputation and despite its gigantic zoom range the X90’s lens produces superb edge-to-edge sharpness with no trace of chromatic aberration or barrel distortion. This may be due to corrections at the processing stage, but the results are still impressive. Colour rendition and dynamic range are better than average, and exposure metering and focusing are reliably accurate. All in all a significant improvement, and hopefully a sign of great things to come from the Pentax X range.

Although it is only a relatively minor upgrade over the X70, it’s enough to put the Pentax X90 into the top bracket of superzoom cameras. Build quality, design and handling are right up there with the best, and the improved performance and battery duration are very welcome. There’s still room for further improvement in image quality, but the results are far from disappointing. 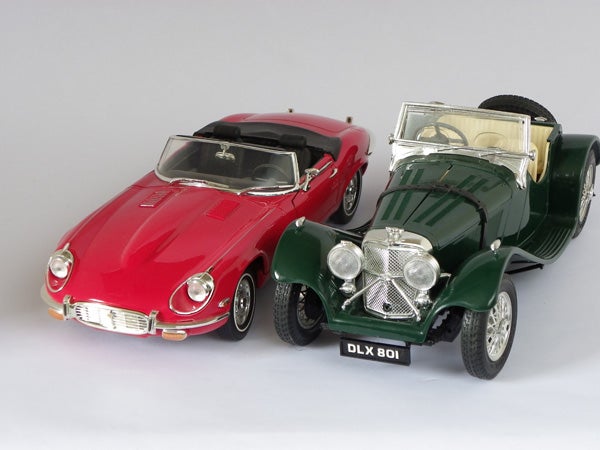 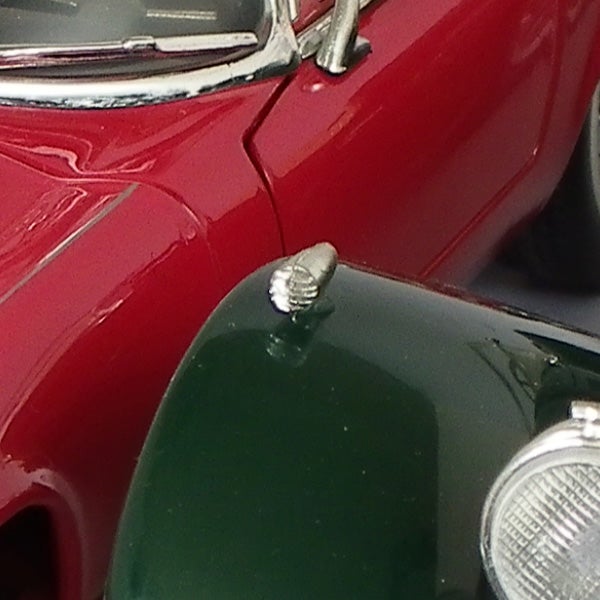 The image quality at the new 80 ISO minimum sensitivity is very good. 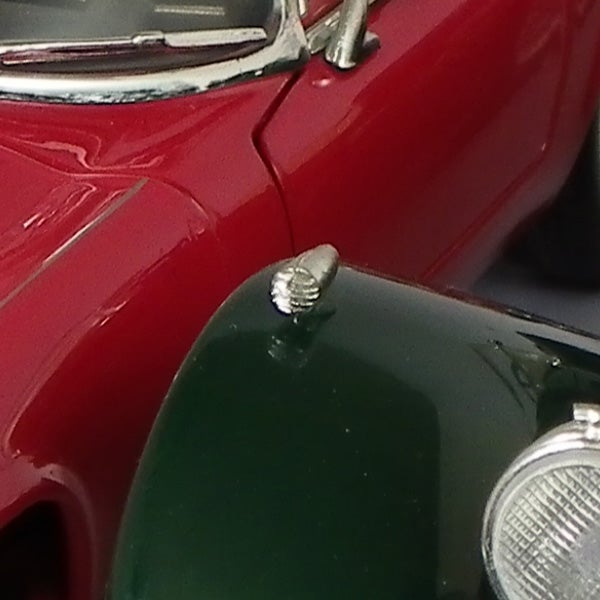 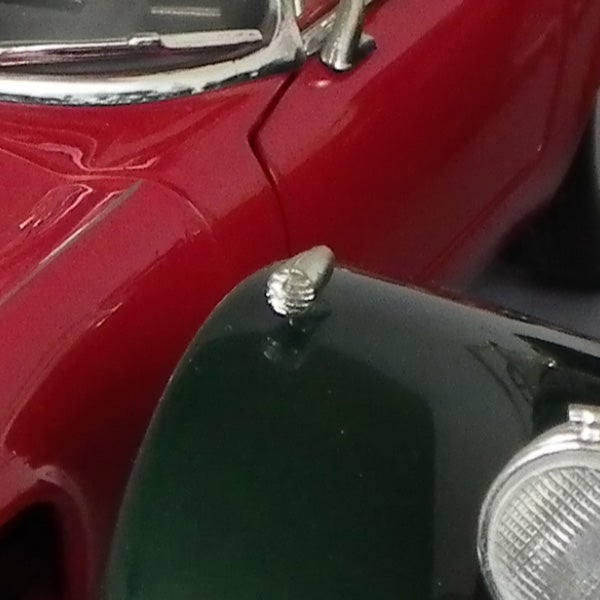 Still noting to worry about at 200 ISO. 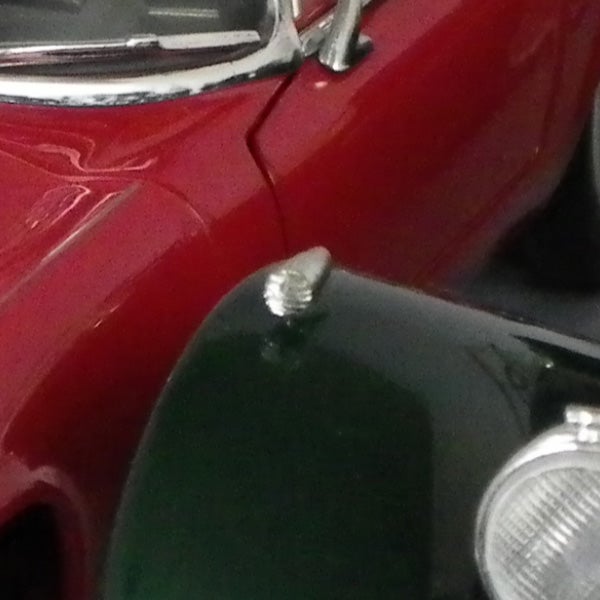 Noise reduction has blurred some detail at 400 ISO. 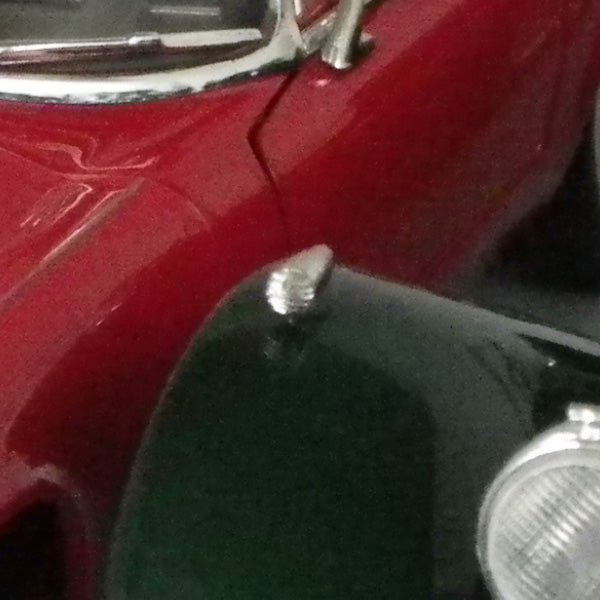 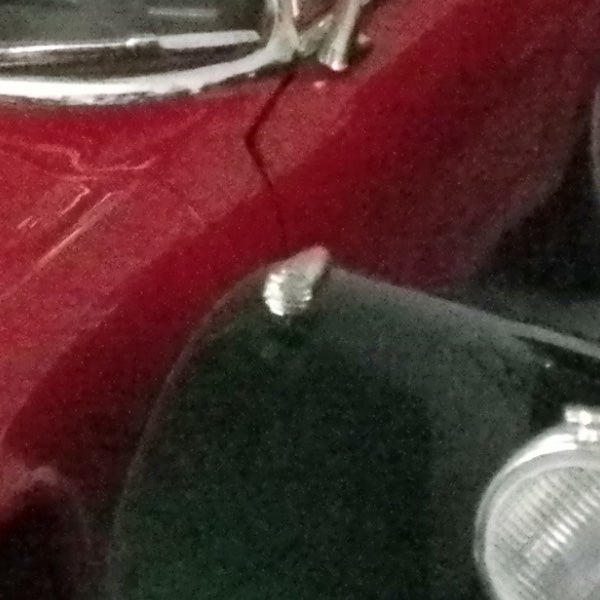 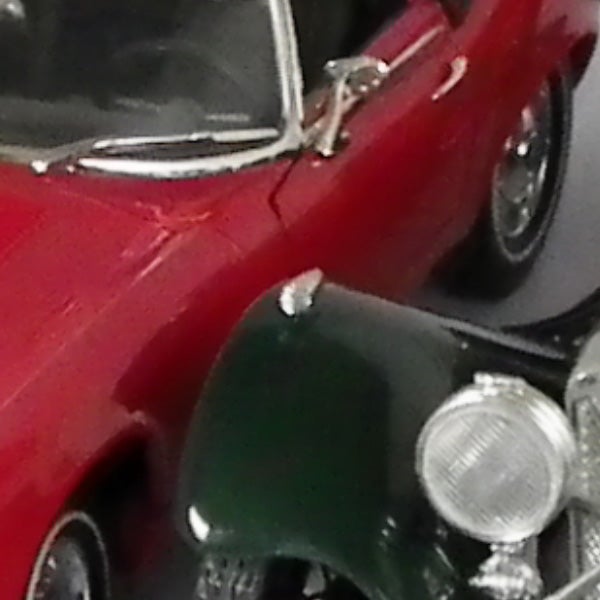 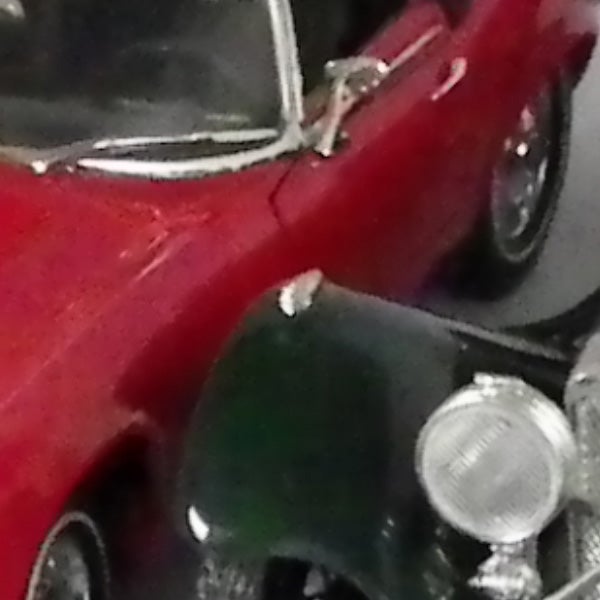 6400 ISO is also available at 5MP, but it looks like a cheap webcam. 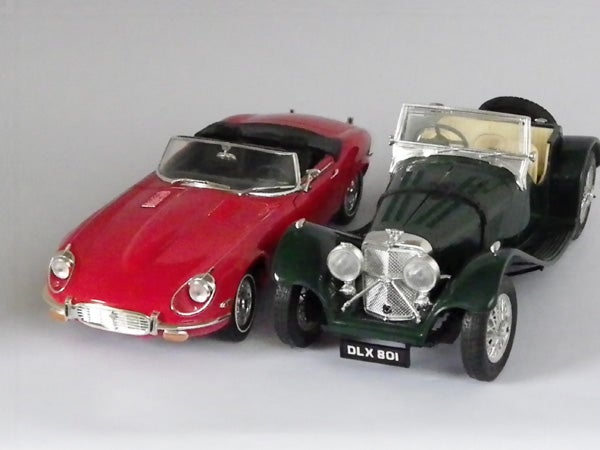 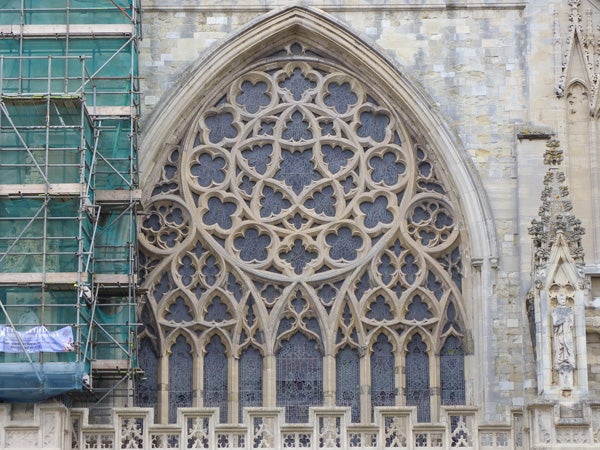 Here’s the usual detail test shot of the West Window of Exeter Cathedral, for you to compare with other cameras. See below for a full res crop, or click to see the whole picture. File size 3.6MB. 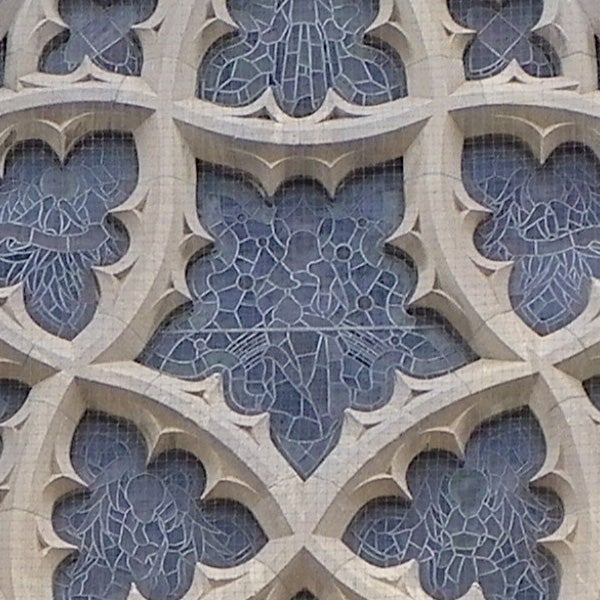 The level of fine detail is impressive, and slightly better than the (linkkout:https://www.trustedreviews.com/digital-cameras/review/2009/07/11/Pentax-X70-Digital-Camera/p6 X70), nut it still looks a bit over-processed. 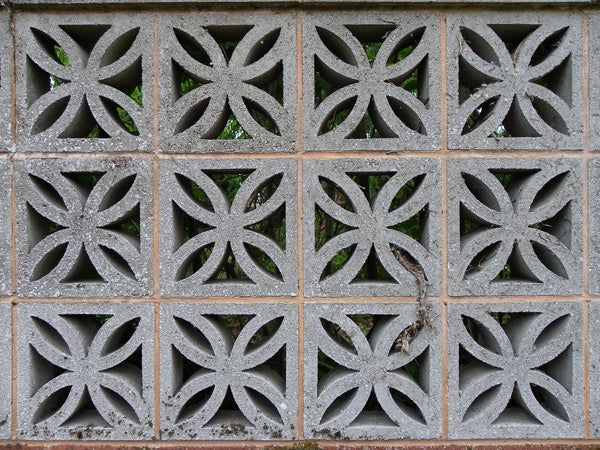 The new lens produces no barrel distortion despite the 26mm wide angle. 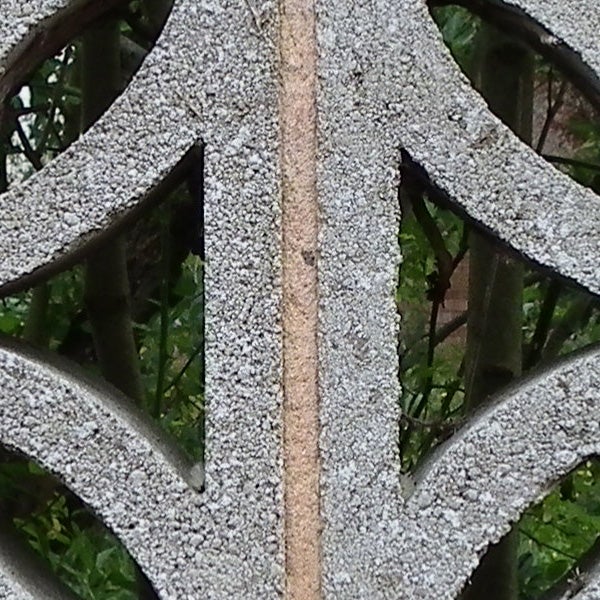 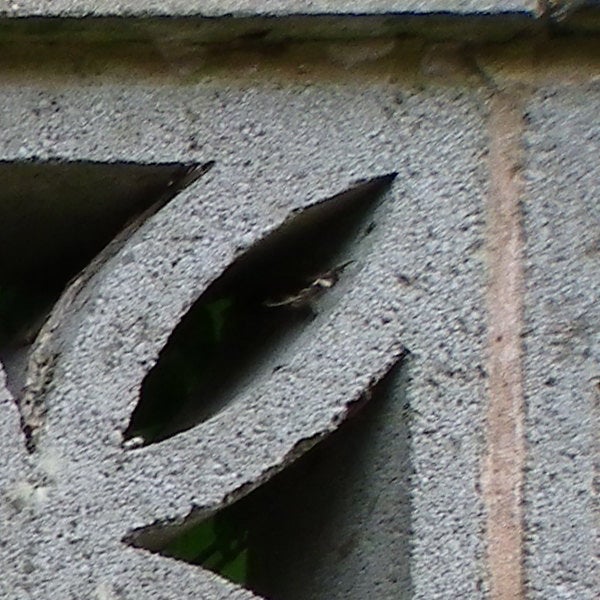 There is a little corner blurring, but no chromatic aberration. 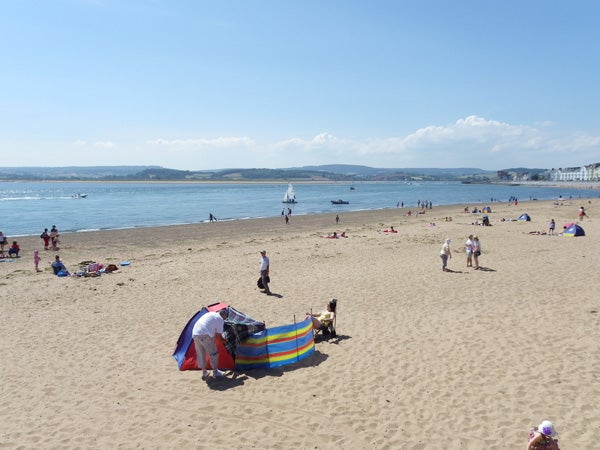 The wide angle end is equivalent to 26mm, wider than most comparable cameras. Please note that this was shot on the medium quality setting. File size 1.8MB. 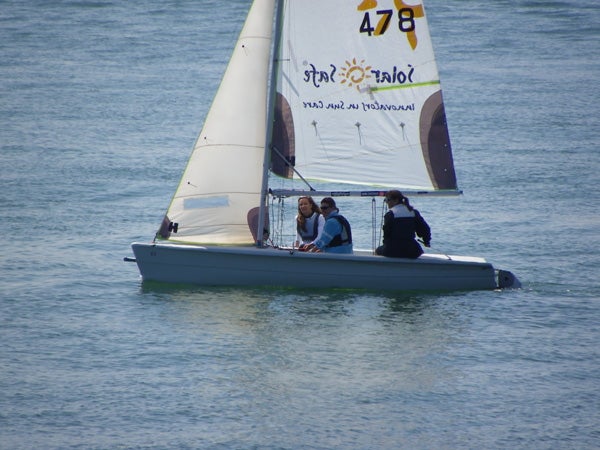 The telephoto end is equivalent to a massive 676mm. This was shot from the same spot as the picture above, also on medium quality. File size 1.8MB. 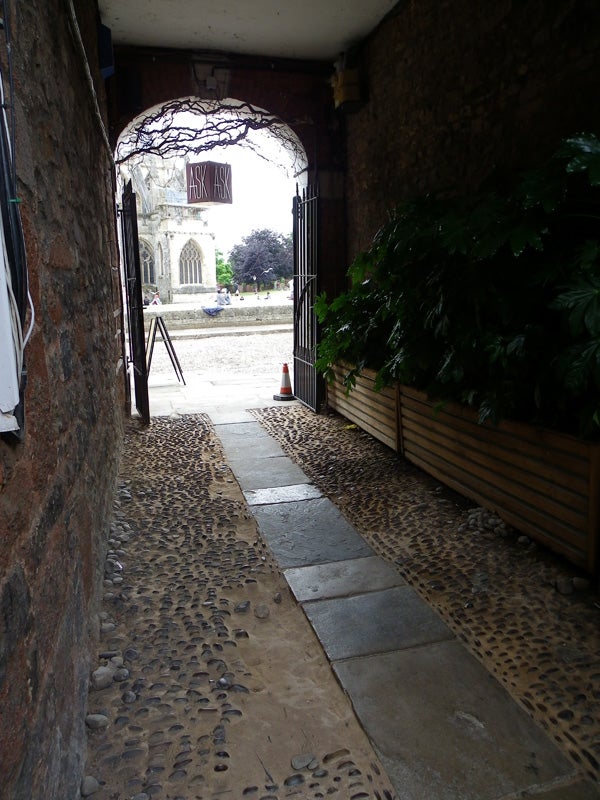 Dynamic range in standard mode is pretty poor, with no shadow detail. 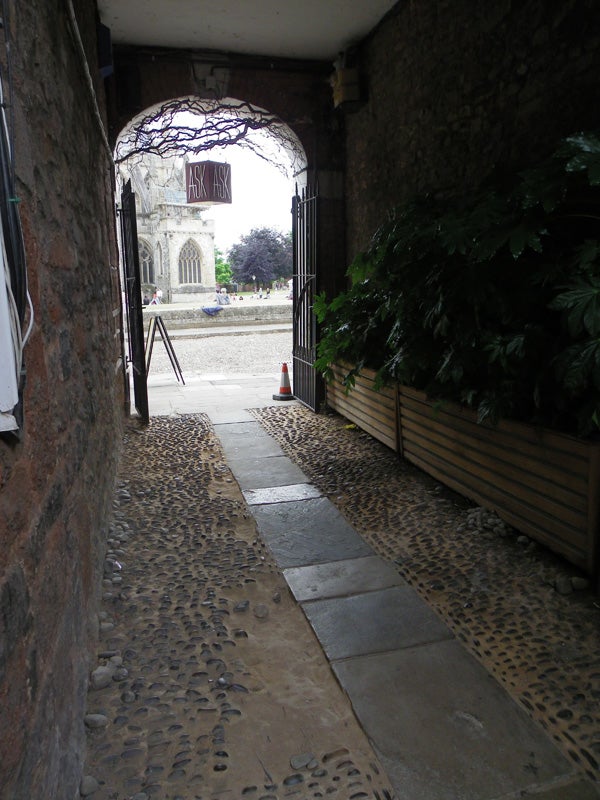 With the D-Range booster activated there is more shadow and highlight detail. 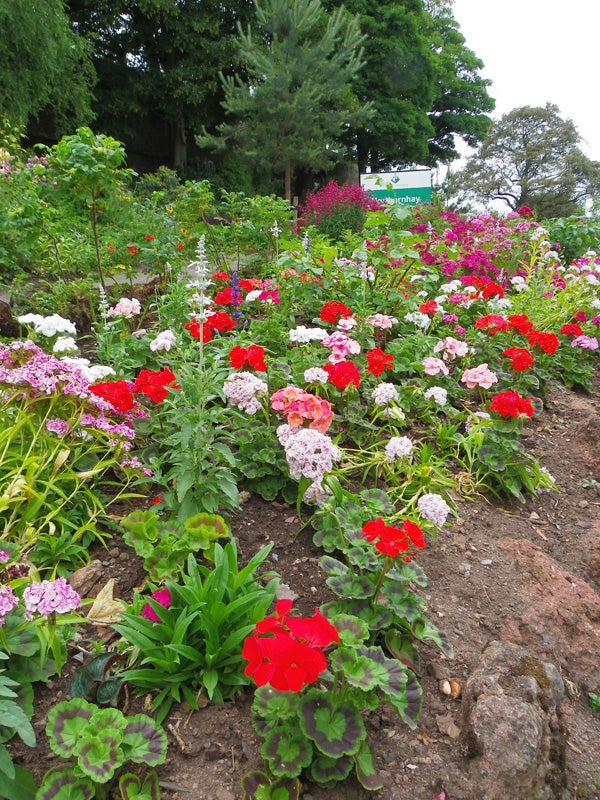 Colour rendition is bright and vivid. 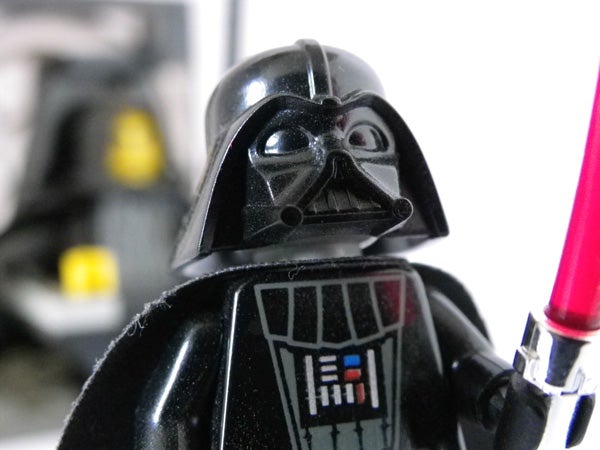 Do not underestimate the power of the 1cm macro feature. 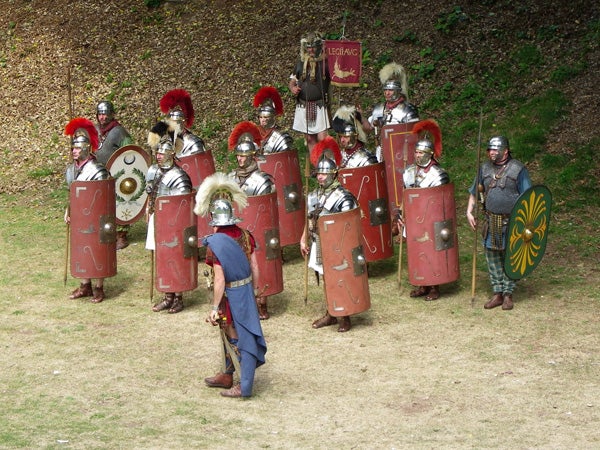 The handy time travel feature is useful for amateur archaeologists, or if you’re running late for a train.