Back in January I reviewed the Pentax Optio T20, a 7.1-megapixel, 3x zoom ultra-compact camera with a novel 3-inch touch-screen interface. It was an interesting camera with some nice touches, but was let down by sluggish performance and limited battery life, as well as a couple of annoying features. I gave it a low score, in retrospect possibly a bit lower than it really deserved. 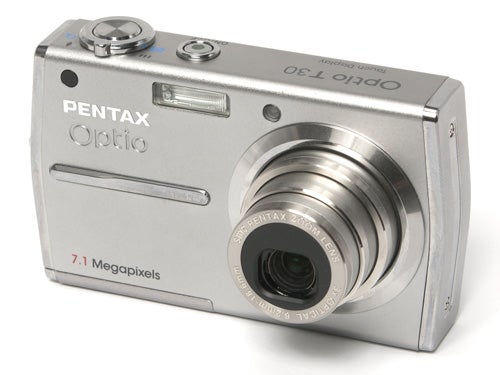 However 6 months later the T20 has been replaced in Pentax’s model range by this, the new T30. It too is a 3x zoom ultra-compact (as are most of Pentax’s range) with the same 3-inch monitor with touch-screen interface, but this time it features a 7.1-megapixel CCD, a massive 0.1 megapixels bigger than its predecessor. It also has a slightly re-designed body, and as we’ll see it also has several other improvements. 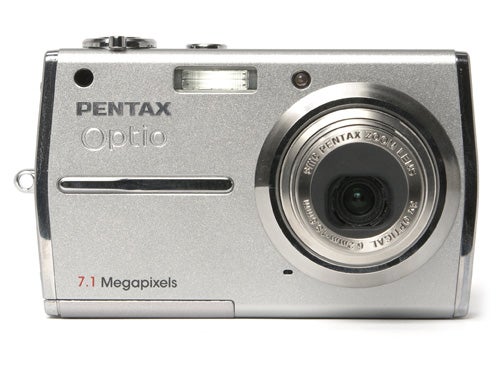 The overall style of the T30 is a bit less bland than the T20. The end plates, which were previously flat, are now curved, while the previously curved top plate is now flat. The detailing on the front is slightly shaped, possibly with the intention of acting as a sort of finger grip, but if so it is largely ineffective. The back is just as minimalist as before. Because most of the control functions are operated by the touch screen system, there is no need for the traditional D-pad on the back, leaving only the playback and menu buttons. This leaves plenty of room to hold the camera, despite the large screen which takes up most of the back. There is a small indented thumb grip area, but it doesn’t seem to make much difference. The 3-inch LCD monitor screen itself is particularly good, with 230k pixels and a nice fast refresh rate.

Build quality is also very good, with a strong all-metal body and excellent fit and finish. The few remaining controls are solidly mounted, and the battery/card hatch is nice and secure with a metal hinge. The only glitch is the soft plastic tripod mount, so be careful not to strip the thread.


Of course it is the touch-screen system itself which is the T30’s main selling point. Touch-screen technology isn’t nearly as dodgy as it used to be, thanks mainly to the advances made in PDA development, and the T30’s system does work very well indeed. It is designed to be used with the fingertip rather than a stylus, and the virtual buttons are nice and big so they’re hard to miss. It operates quickly and smoothly, and once you get use to the locations of the various functions and options it is much quicker to use than a conventional menu system for almost every operation. 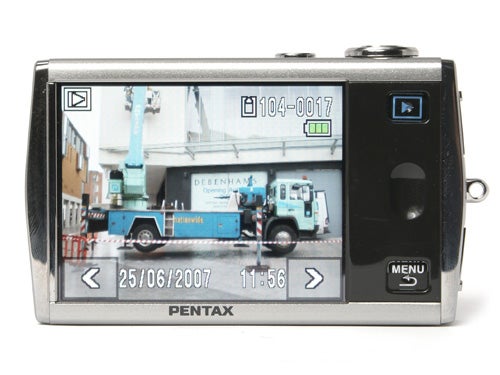 The touch-screen really comes into its own in playback mode though, because it incorporates a simple paint program, with a range of colours, brush sizes and softness effects. With the aid of any suitably stylus-shaped tool it is possible to write or draw on pictures, or to add a range of silly extras such as sparkly stars or a Groucho Marx moustache and glasses. There is also a memo pad function so you can jot down brief notes and save them as image files to the memory card. It’s not as fast or responsive as a PDA, but it is quite usable.


Apart from the touch screen features, the T30 is a bit limited. It is only a basic snapshot camera, so its range of features is restricted to the same set as the Optio M30, in other words not much. It has a program auto mode and 12 scene modes, although this includes the “anti-shake” mode, which as with most basic compacts is really just a high-ISO mode to produce faster shutter speeds. It also has Pentax’s usual Auto-picture mode, in which the camera automatically selects the most suitable scene program for the type of shot being taken. It is a very effective system and produces good results in most circumstances. 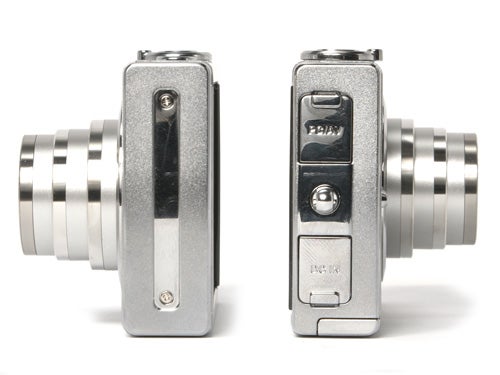 Other menu options include adjustable contrast, saturation and sharpness, auto-bracketing, exposure compensation, adjustable focus parameters (wide area, spot or tracking AF), and spot, centre-weighted or matrix metering. The movie mode has a maximum setting of VGA resolution at 30fps with mono audio, which is pretty much the market standard these days.

Another of the T20’s problems that has been addressed is that of battery life. The aging 710mAh Li-ion battery of the T20 has been replaced with a more modern-looking 740mAh battery, not a massive improvement perhaps, but the camera’s electronics also appear to be more efficient, resulting in a claimed capacity of approximately 200 shots on a full charge. From the results I observed, this appears to be an accurate claim. 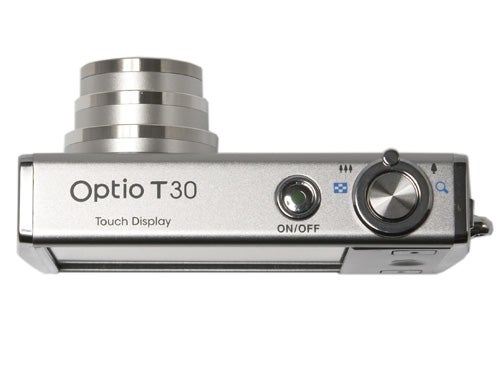 The T20 also had a major problem with performance, and unfortunately this has not been fully rectified. The T30 starts up in a rather slow 3.5 seconds, probably because it has to initialise the touch screen, although it shuts down more quickly. In single-shot mode, shot-to-shot time is around 3 seconds, which is about the average for a camera in this class. In continuous shooting mode it speeds up somewhat, shooting at a sustained average of about 1.7 seconds per shot, although the initial burst of five frames is quicker, at about one frame a second. The AF system is one area where Pentax has made significant improvements lately, and the T30 is noticeably faster than the T20 in this respect. Low light focusing is still slow, but it will eventually focus even in complete darkness thanks to an AF assist lamp, although this only has a range of a couple of metres at best. Flash range is an excellent six metres at wide angle or three metres at telephoto, with very good frame coverage. 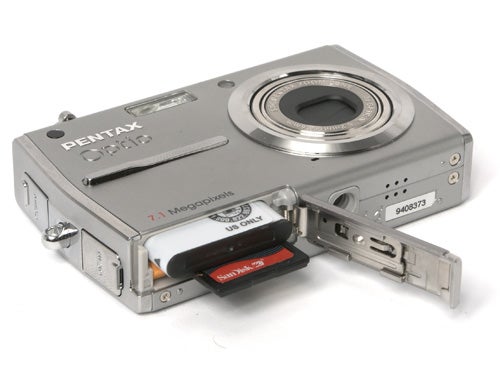 Picture quality also seems to be significantly improved over the rather disappointing performance of the T20, although it is still not entirely problem-free. The T30 has a maximum ISO setting of 3200, and produces good results at settings up to 400 ISO, and printable results as high as 1600, which is a pretty creditable performance by any standard. Overall picture quality is about average for this class of camera, with the lens producing good detail and contrast with relatively little wide-angle barrel distortion, although it did produce the opposite pincushion distortion at the telephoto end. Exposure and colour balance were accurate despite the atrocious weather in which I was taking my test shots. In less monsoon-like conditions the results would undoubtedly have been much better.

The Pentax Optio T30 is a significant improvement on the innovative but flawed T20. The touch-screen technology provides a real advantage in speed of operation and is very easy to use, with some fun features in image playback. Performance is a bit on the slow side, but design and build quality are excellent. Picture quality is about average for the class, but high-ISO results are surprisingly good. 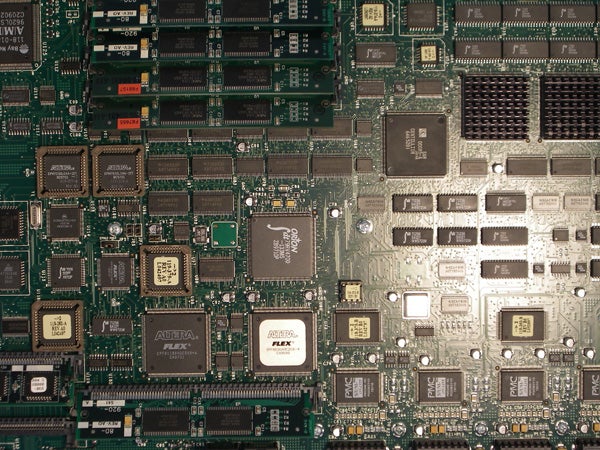 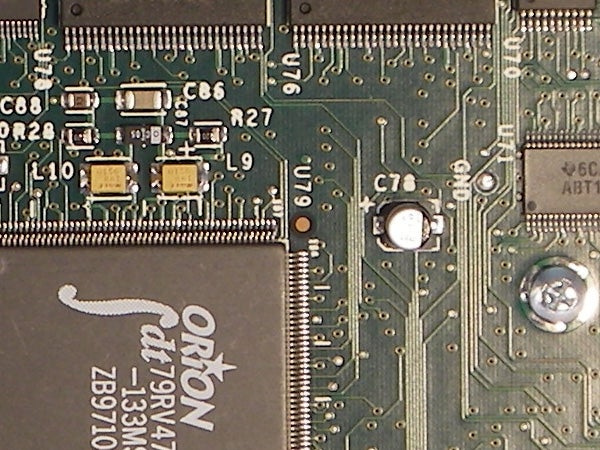 At the lowest setting of 64 ISO the picture quality is very good, with no trace of image noise. 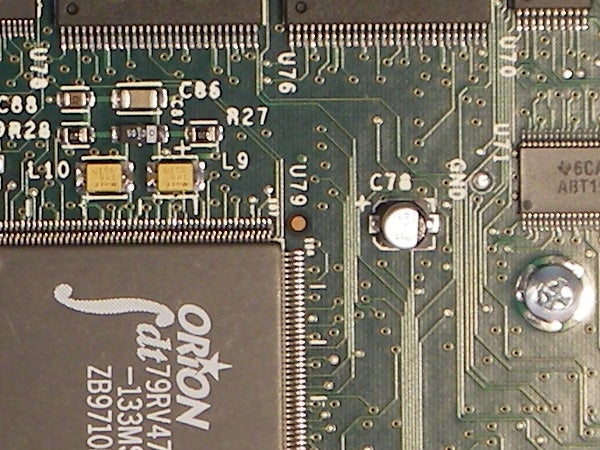 Likewise at 100 ISO the image is clean and smooth with good fine detail. 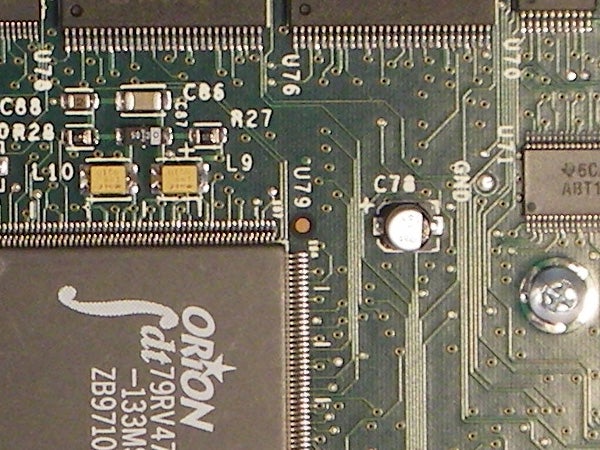 There is very slight colour noise at 200 ISO but it is barely noticeable. 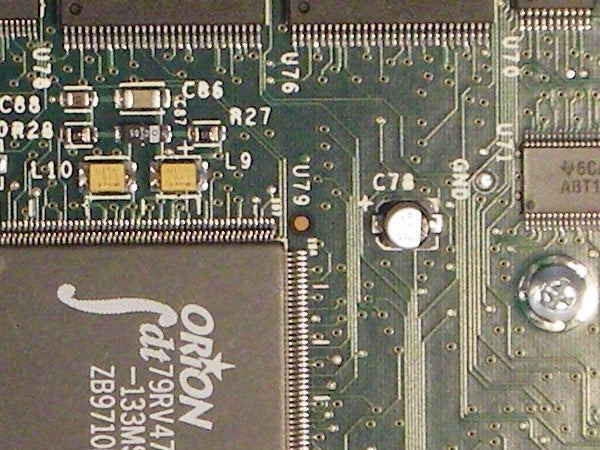 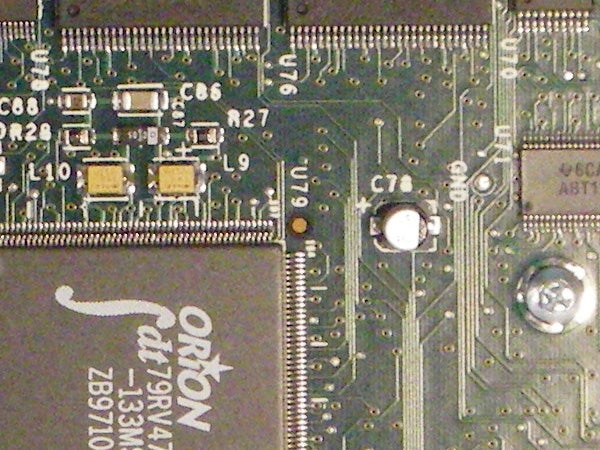 At 800 ISO the colour noise is more obtrusive, and is joined by luminance noise as well, but the image is still usable. 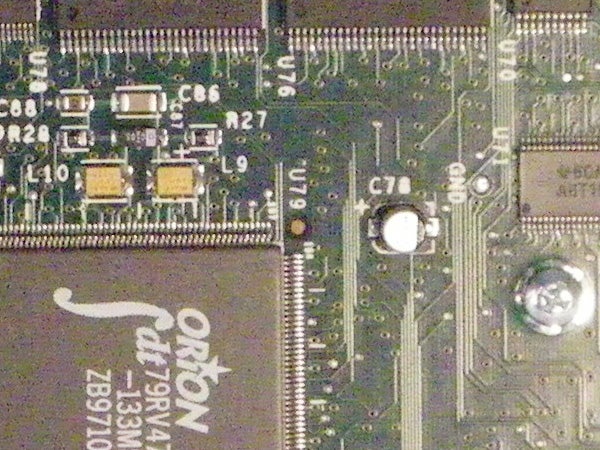 At 1600 ISO the image quality takes a big turn for the worse, but this is still just about printable. 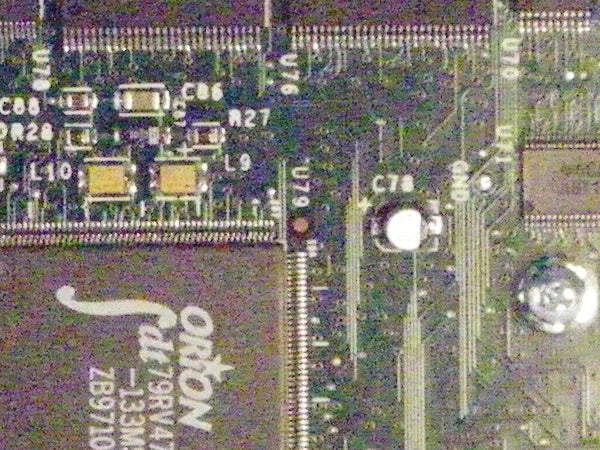 As is often the case, 3200 ISO is really just there for show, produces very poor results. 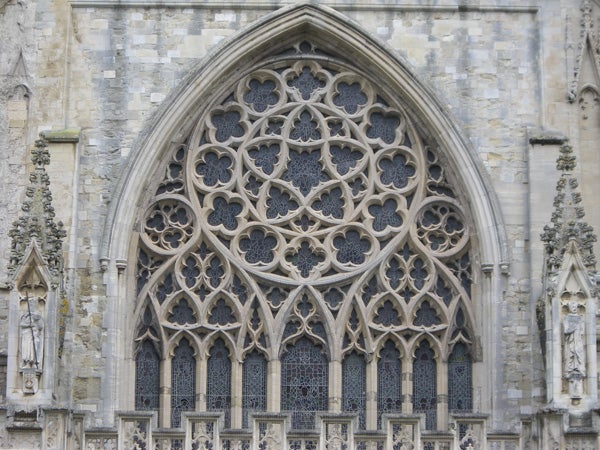 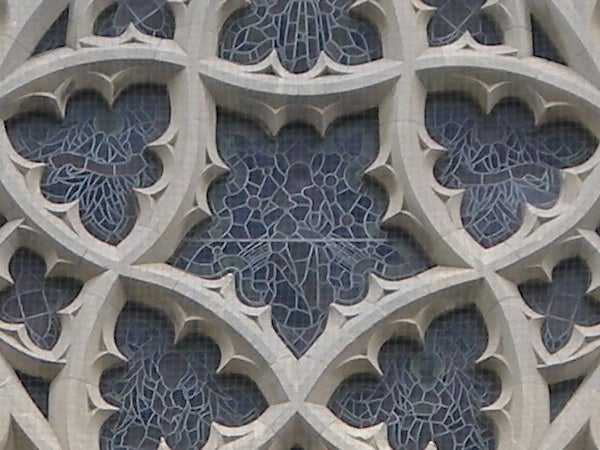 Image quality isn’t quite up to the standard of the very best 7MP compacts, but some of that is due to the lousy weather. 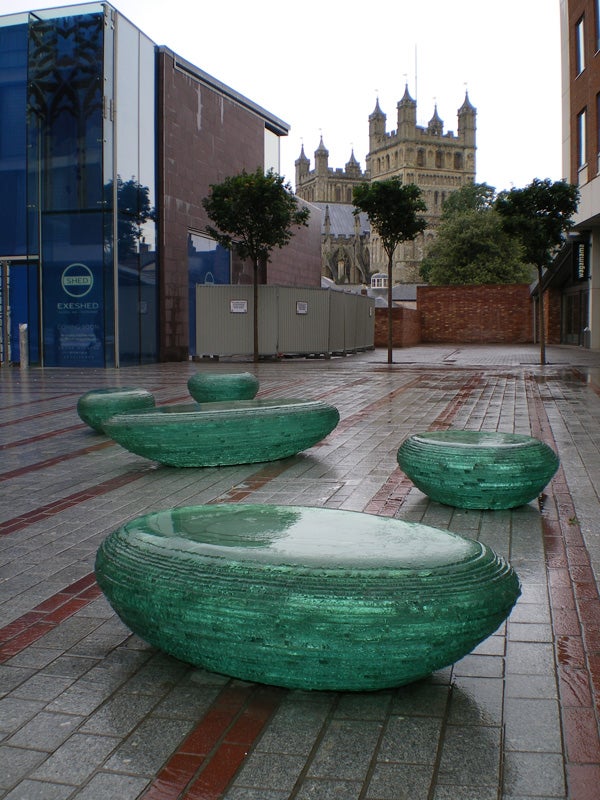 The foreground of this image is fine, but the sky is burned out and there is visible fringing around the towers of the cathedral in the background. 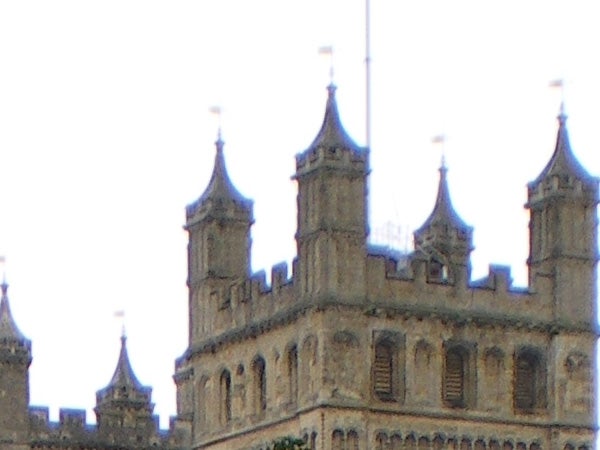 This is a crop from the above image, showing the fringing more clearly. This is taken at the wide-angle setting, equivalent to 37.5mm. 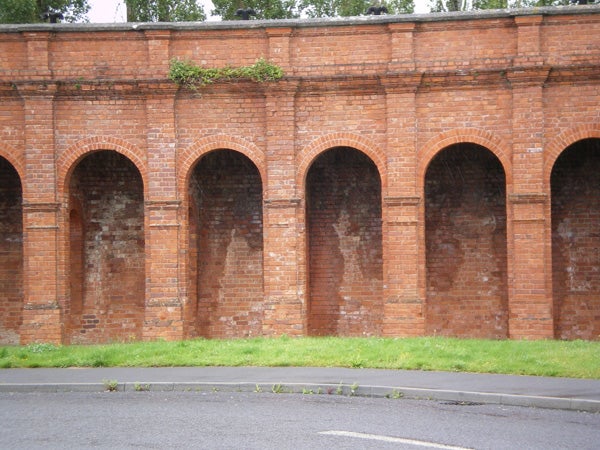 This is taken from the same spot using the zoom lens at full telephoto. Note the pincushion distortion which has curved the top of the structure down in the middle. 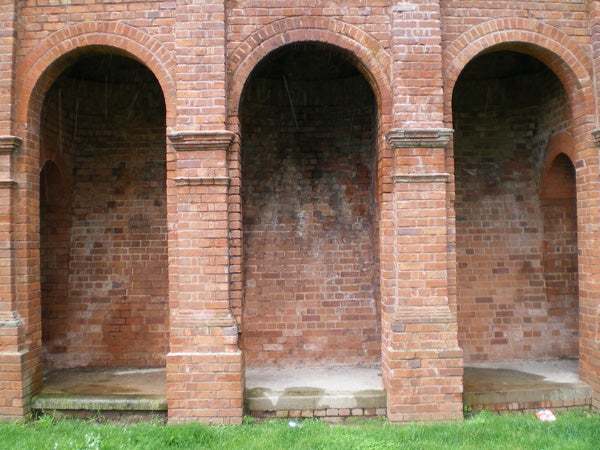 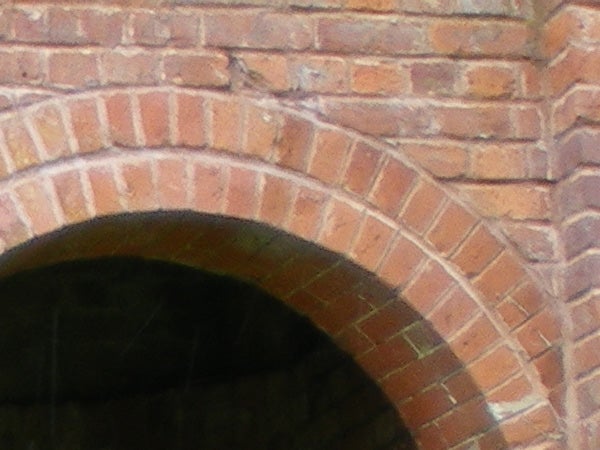