Pentax has an unusual approach to the digital camera market. While the other manufacturers have a wide range of models in all the different categories – ultra-compact style cameras, standard zoom compacts, superzooms, semi-pro “bridge” cameras and DSLRS – for several years now Pentax has poured most of its resources into just two of those categories, ultra-compacts and DSLRs. This might seem like a risky strategy, but perhaps Pentax figures that it’s better to be the master of two trades than Jack of all. 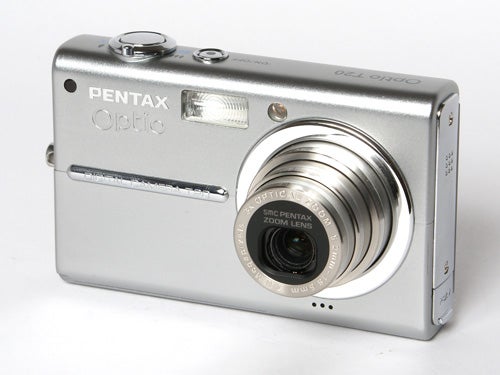 As a result the Pentax digital camera range currently consists of three DSLRs and no fewer than sixteen 3x optical zoom ultra-compact cameras. Within the range are many variations on the basic theme, with sensor resolutions ranging from 5.0 to 10.0 megapixels, some cameras powered by AA batteries and others by rechargeable Li-ion cells, and also the W-series of waterproof cameras, including the W20 that I reviewed last week. If you’re looking for a compact digital camera with a 3x zoom lens, the chances are that Pentax has something that will suit your needs. 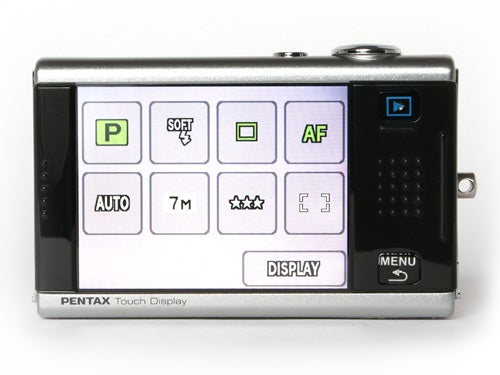 Like its siblings it features Pentax’s 6.2-18.6mm (37.5mm-112.5mm equiv.) Sliding Lens System, which folds down flush with the camera’s body. This allows the T20 to be just 19.5mm thick, making it one of the slimmest cameras available. It has a very sleek and minimalist appearance, with a simple rectangular shape rounded off on the top and bottom edges. The body is all aluminium alloy which feels nice and sturdy, and build quality is of a very high standard. Weighing 135g it is nice and light and won’t make much of a bulge in your shirt pocket.


Because of its touch-screen control system there are only two buttons on the back panel, so despite the large monitor there is plenty of room to grip the camera, with a large textured thumb grip area on the back.

On the top panel there is only the on/off button, the shutter release and the zoom control, which is a rotating bezel around the shutter button. The controls are clearly labelled and easy to operate, although the on/off button is recessed to prevent accidental activation.


Touch-screen operation isn’t a new idea, and I’ve used several cameras in the past that have made use of it, but few of them have been successful. Pentax’s version however works very well, and makes the camera very quick and simple to operate. In shooting mode a single finger-tap of the screen brings up the main shooting options, eight finger-sized icons for shooting mode, flash mode, drive mode, AF setting, ISO, picture size and quality, and metering mode. Tapping any of these brings up a sub-menu, so changing any of the settings usually takes no more than three taps. 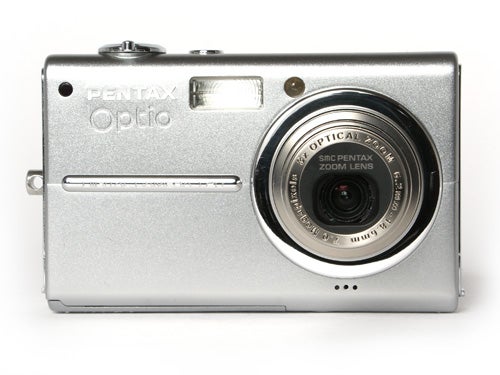 The menu button likewise brings up a series of touch-buttons for the usual menu options, some of which duplicate the shooting menu, but also include things like adjustable saturation, contrast and sharpness.


One useful feature of this system is that the bottom row of shooting mode buttons are user-defined, so you can choose whichever four menu functions are most useful to you. This is handy, since exposure compensation is not included in the default set, but can be added by the user.


The shooting mode palette has fewer options than most of Pentax’s range, with just twelve choices. However these cover all of the most useful options, including portrait, landscape, sports, surf & snow, night scene, food, and of course the inevitable “Frame Composite” mode. It also has a “Pets” option, with three different options for light, mid and dark coloured coats.


In playback mode there are some neat features, including automatic red-eye correction, and the ability to draw or add clip-art directly onto your pictures using the touch screen, although this is a lot easier if you use a stylus of some sort. 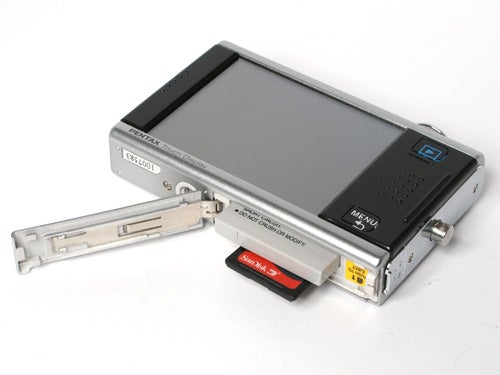 So far so good then, but nearly every camera has a weakness, and for the T20 it’s performance. Start-up time is just over three seconds, which might not sound like a lot but is well below average for a modern compact. Continuous shooting is also slow, shooting at approximately one frame every two seconds. However it’s the AF system that really lets it down. It’s one of the slowest I’ve seen in a couple of years, taking well over a second to achieve focus even in good light. Although its low-light focusing ability is very good thanks to a nice bright AF lamp, in the dark it’s focusing is even slower.

It also has one massively annoying trait. When you press the shutter button to focus, the scene on the monitor freezes until the AF system locks on, so trying to frame a moving subject is almost impossible. In continuous shooting mode this effectively means that the monitor is useless, because it only shows the shots that have been taken, without showing what you’re trying to frame. 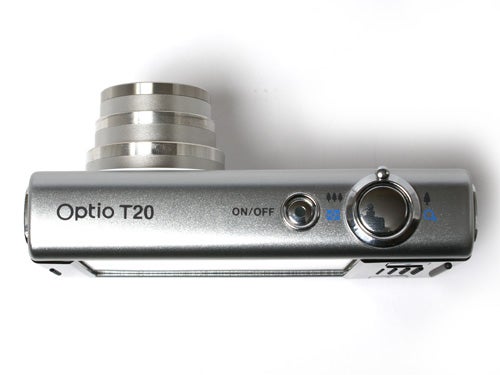 Battery life is also extremely poor. The T20 uses the same small 710mAh Li-ion battery that Pentax has used in most of its compacts since the original Optio S four years ago, and it simply isn’t powerful enough to cope with a complex technological camera like the T20. Even Pentax’s own spec sheet only claims 130 shots on a full charge, and to be honest I think this is an over-estimate. Reviewing pictures or heavy use of the touch screen depletes it even faster.

This is a shame, because in other respects the T20 is a nice enough camera. Image quality, while not brilliant, is at least above average, with good exposure metering, decent colour reproduction and reasonable high-ISO noise control. Low light flash photography is very good, with a maximum flash range of 4.5m and excellent frame coverage. File size at maximum size and quality is around 3.2MB per shot, with a 1GB card providing enough space for approximately 283 pictures. The movie mode is also good, shooting at 640 x 480 resolution and 30fps, with a 1GB card providing nearly 22 minutes of shooting.


The Pentax Optio T20 could have been a much better camera. It is stylish, well made and the touch-screen technology is well implemented and has some genuinely useful features. However very slow performance, severely limited battery duration and the annoying AF monitor-freeze are major handicaps that are impossible to ignore. 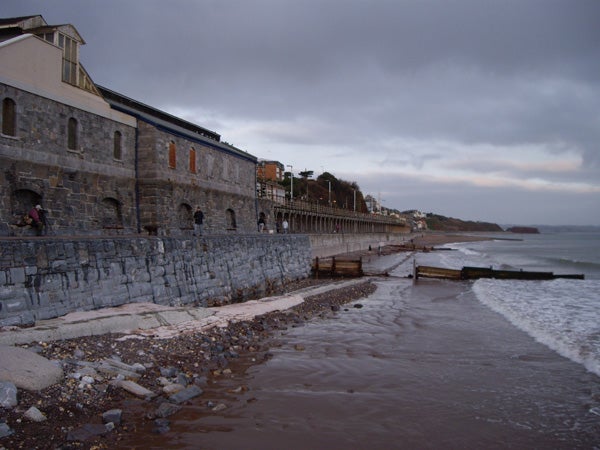 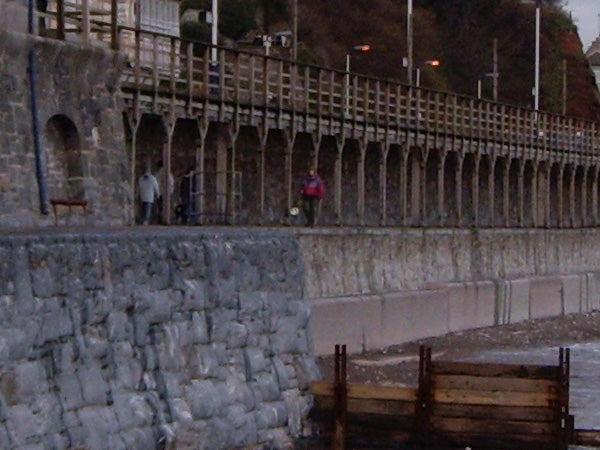 At 80 ISO this shot is noise free and has plenty of sharp detail, allowing you to see why so many tourists come down to Devon each summer. 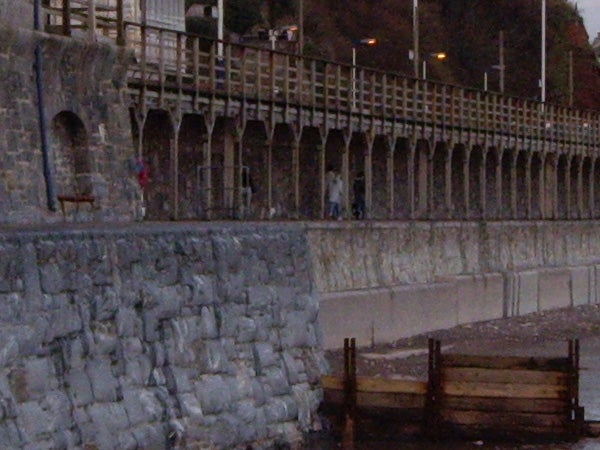 Up one stop to ISO 160 and there is still no visible image noise. 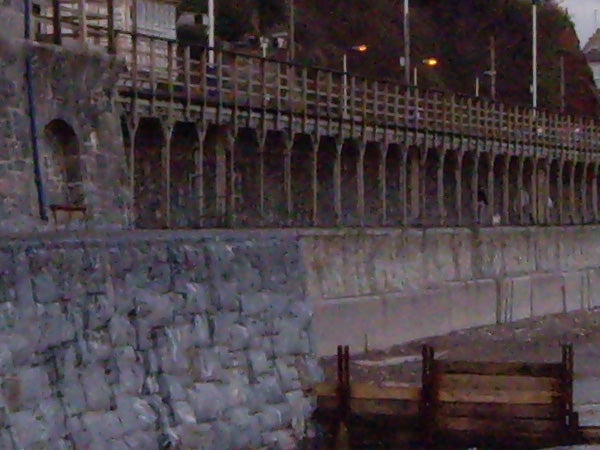 Up to 400 ISO and now there is some colour distortion and image noise visible, but it is well controlled and there is still enough detail in the shot to make a good print. 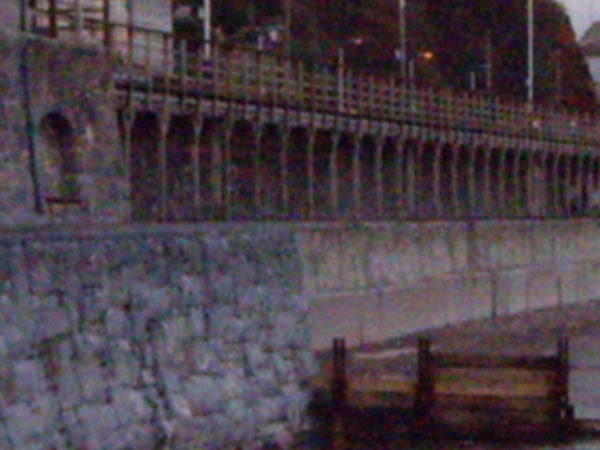 At the maximum ISO setting of 800 the image is suddenly very noisy, enough to compromise quality even on a small print. 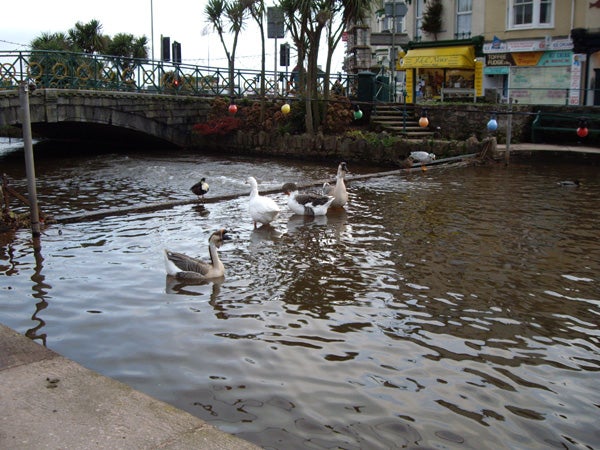 The wide-angle end of the T20’s lens is equivalent to 37.5mm on a film camera, not really wide enough for panoramic shots. 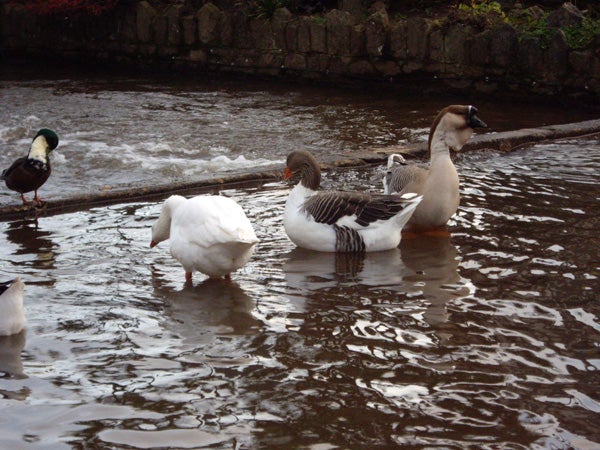 Taken from the same position as the shot above, this demonstrates the capability of the telephoto end of the zoom range, equivalent to 112.5mm on a 35mm camera. 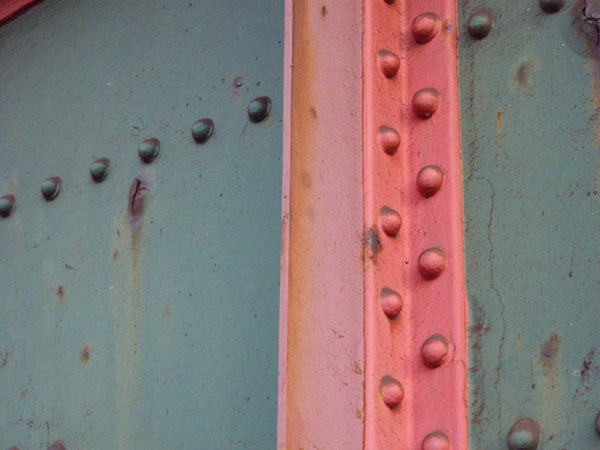 The T20’s auto-ISO system really doesn’t like shadows, and has set the sensitivity to 400 for this shot, washing out a lot of colour saturation. 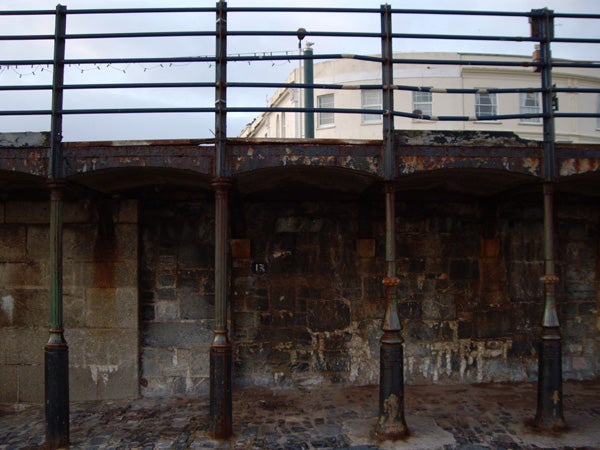 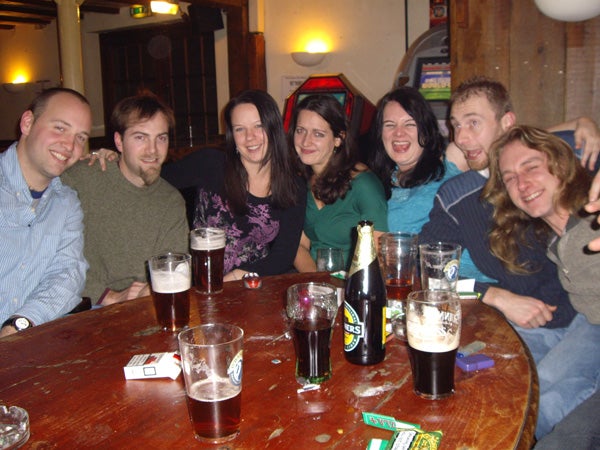 The T20 has a good flash, with a maximum range of 4.5m and excellent frame coverage at wide angle, and good low-light focusing, ideal for large groups at parties. 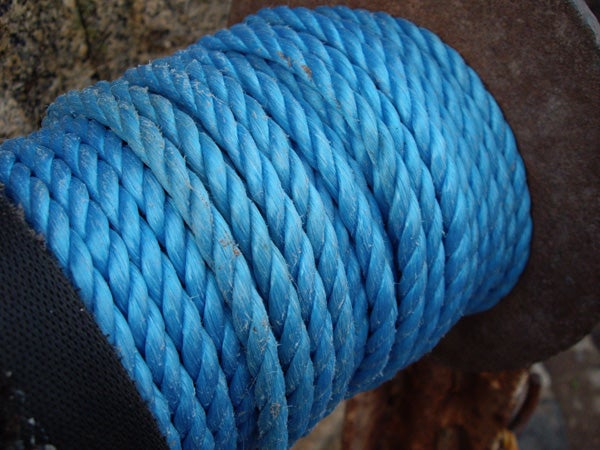 The T20’s macro range is only 15cm, which really isn’t as macro as all that.