It seems like every other week I’m reviewing yet another tiny Pentax 5-megapixel compact. In fact a quick browse through my camera samples folder shows that this is the eighth one that I’ve written about this year. Come on Pentax, give my aching fingers a break! I could get carpal tunnel syndrome at this rate.


Available for £150.70, the Optio S55 is a budget-priced zoom compact that saves on development costs by sharing many of its features with other cameras in the Optio series. It has the familiar 3x zoom Sliding Lens System optics found on most of the other models in the range, the same big 2.5in LCD monitor found on the S5z, and the same slightly-larger-than-tiny aluminium alloy body found on the S45 and S50. 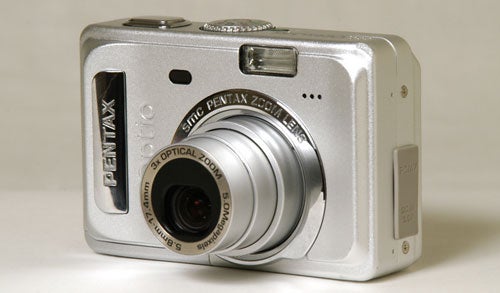 The size of the body is mainly to accommodate the power source. Like the S45 and S50, the S55 runs on two AA batteries, making a good choice for holiday photography. If you’re stuck in the middle of nowhere and can’t find a power point to plug in your battery charger, you can always chuck in a couple of Duracells to keep shooting for another few hours.


As with all Pentax models, in fact most of the models from all the major manufacturers, build quality is exemplary. The sandblasted-looking exterior has excellent resistance to dents and scratches, and shows up greasy fingerprints a lot less easily than a glossy finish would do. That huge LCD monitor screen also seems to have a scratch-resistant coating. 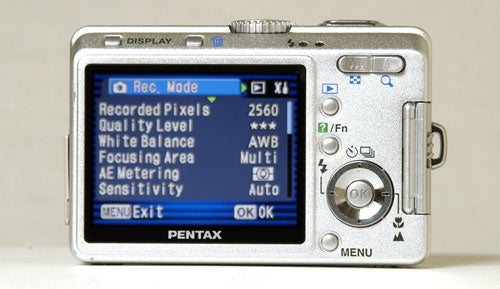 The control layout is simple enough, but this is not a simple camera, and I would certainly not recommend it for a first time user. My parents, both in their 70s, took the S55 on holiday to Italy to get me some good test shots. My father is a keen amateur photographer and owns a couple of nice film SLRs, but he had never used a digital camera before. I attempted to explain the S55’s multiple modes and options to him, but after going over it twice I still don’t think he’d really grasped it. I can’t say I blame him though because to be honest even I found it confusing and difficult to understand.

The problem is that there are far too many options, and they are all accessed in different ways. For instance, the main mode dial has settings for portrait, landscape and night scene photography, as one might expect. However set the main dial to “Pict” mode, press the OK button and you’re presented with nine options including landscape portrait, self portrait, sunset, beach and snow.


Set the main dial to the icon of an artist’s palette and you get a variety of colour filter options, as well as panorama stitching and two-in-one group portrait function. On top of that there’s a standard program auto mode, but also the “green smiley” mode, a simplified auto-everything option that bypasses all the manual controls and automatically selects the best mode for the conditions. 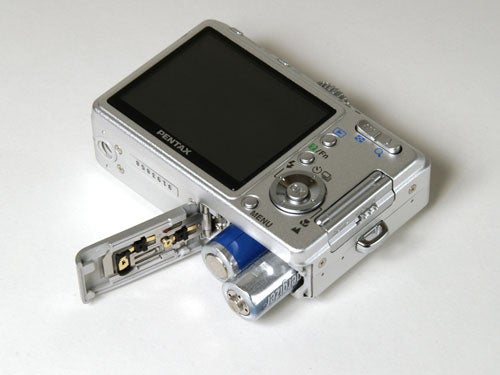 The impression I get is that the designers of the S55 just wanted to see how much stuff they could cram into one camera. I have to admit it’s an impressive list, but I just wish they’d spend as much time thinking about how all those modes could actually be used. Either a much bigger mode dial or a nice integrated menu system would have made far more sense.


It’s a shame that the interface is so awful, because apart from that the S55 is quite a nice camera, although like all of Pentax’s current Optio range it is a little slow. It starts up in just under three seconds, which is a little bit on the sleepy side, and in continuous drive mode it shoots five frames in just over eight seconds, which while not embarrassingly slow, is put to shame by the rapid drive modes available on some recent rival models, such as the excellent Kodak V550. 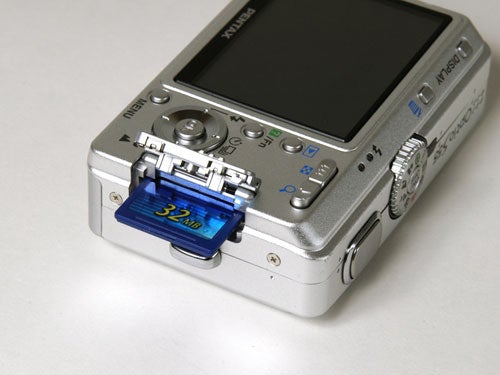 The plethora of modes and options listed above at least offer some versatility, and it has some features that are a lot of fun to play with, such as colour mask filters that shoot a black and white picture but with one primary (red, green or blue) in colour. Unfortunately the S55 lacks a real manual mode, but the “Fn” button does allow rapid access to exposure compensation, so some quick creative control is available.

The built-in flash charges quickly and has a useful range of 4.9 metres, which isn’t bad for a unit this size, although it does seem to have a tendency to over-expose indoor flash shots. The movie mode is adequate, although with a resolution of 320 x 240 pixels at 30fps with mono sound, it’s nothing to write home about. 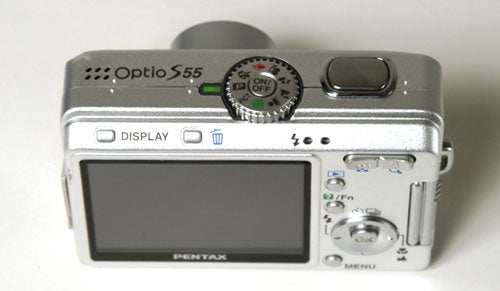 In normal light the multi-point AF system is reasonably quick, taking well under a second to lock on, but the lower the light levels the slower it gets, and quickly gets to a point where it won’t lock at all. The camera has no AF illuminator, so you can expect some very blurry nighttime shots.


In general use, the S55 performs well. Colour balance is excellent, focusing is sharp and under most conditions exposure is also very accurate, however it does seem to have a problem with bright reflected light, and burned out highlights were found on a number of shots taken in bright Mediterranean sunshine. 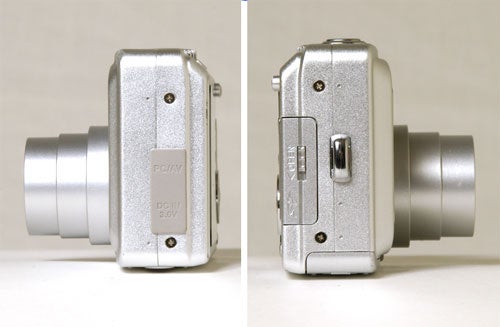 Image noise was also a bit of a problem. In Auto ISO mode the camera will automatically set the sensitivity to 400 ISO in low light conditions, and as you’ll see from the accompanying sample shots, at both 200 and 400 ISO there is a great deal of noise and colour distortion. Results at 50 and 100 ISO are better though.


In summary, the Optio S55 isn’t a bad camera, especially considering the price of £150.70. The use of AA batteries gives it an appeal for those holidaying in out-of-the-way places, and the build quality will make sure it survives the trip. It’s just a pity that the control interface is so complicated, and that the image quality isn’t a little better.


As a budget compact, the Optio S55 has a lot going for it, but unfortunately it is let down by image noise problems and a very confusing list of modes and options. It is rugged and well made though, so you could do worse for your winter holidays.