The digital camera market, as you’re no doubt sick of me telling you, is extremely competitive. Manufacturers will go to extraordinary lengths to make their cameras stand out and be noticed, in a desperate bit to out-sell their rivals. Many will add previously rare and sought after features such as image stabilisation and HD video recording to budget-priced models, while others will invest in research and come up with advanced new technologies such as back-illuminated CMOS sensors and ultra-high-speed shooting. However in these recession-hit times some manufacturers have had to come up with more cost-effective ways of getting their cameras noticed, which is probably what prompted someone in Pentax’s design department to come up with today’s camera, the Optio RS1000. 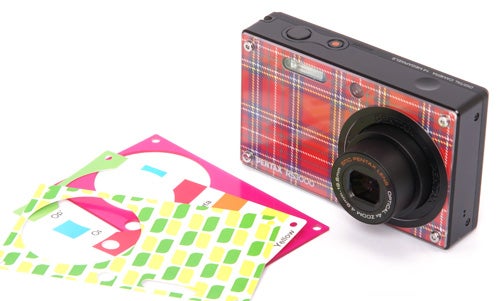 The RS1000 is an extremely basic ultra-compact with a 14-megapixel 1/2.33-inch CCD sensor, a 4x zoom lens equivalent to 27.5-110mm, and a 7.62cm (3.0in) 230k resolution LCD monitor. It has a very plain rectangular plastic body, available in black or white, and extremely simple controls. It is quite similar in size, shape and features to another recent Pentax compact, the Optio H90, launched earlier this year. Like the H90 it is aimed squarely at the budget end of the market, and is currently selling for less than £100. 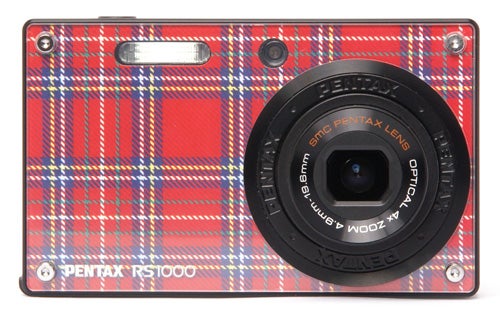 The RS1000’s gimmick is its interchangeable “skin”. The front panel of the camera has a transparent plastic cover, held on by four small screws. This can be removed using a small Allen-key tool, which is supplied, and paper inserts can be placed underneath it, allowing users to customise their camera. A small selection of inserts are supplied, and Pentax has created a website where users can upload their own images and design their own skins, which can be printed on any domestic printer, cut out and applied to the camera.

Despite its low price the RS1000’s build quality is fairly good. The plastic body feels light and a bit insubstantial, but the panel joins are nice and tight, and the low weight works to its advantage. If dropped it’s more likely to bounce than to smash. The tripod bush is plastic, as is the battery/card hatch, which has no locking catch and feels a bit flimsy. The USB socket is uncovered, leaving it prone to dirt and dust. The screws that hold the front cover in place are very small and fiddly, and their short threads and the brass bushes into which they locate look ripe for a stripped thread if over-tightened. The RS1000 is extremely small and very light, measuring just 92 x 56 x 20.5mm and weighing only 130g including battery and SD memory card. It’s even smaller and lighter than the Optio H90. 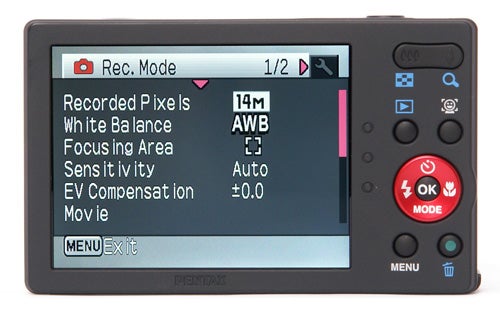 The RS1000 shares its main features with other recent Pentax low-cost compacts, including the H90, the I-10 and the M90. It offers a choice of Program auto, full auto with scene selection, and a list of 15 scene modes, including the usual selection of portrait, night scene, sports, kids etcetera. The menu is very basic, but options do include a shadow correction mode for increased dynamic range. It lacks some common Pentax shooting options such as digital filters and RGB/CSS tone control, however filter effects, red-eye correction and the inevitable Frame Composites can be applied in playback mode. 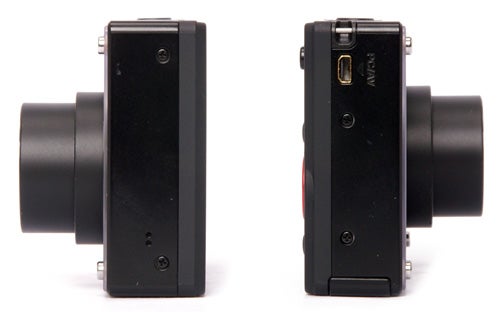 HD video recording has indeed become ubiquitous when even a camera as basic as the RS1000 can offer 1280 x 720 resolution recording at 30fps. Sound is recorded in mono only of course, and the optical zoom cannot be used while shooting, but the video quality is surprisingly good, even in low light.

The RS1000’s overall performance is surprisingly good by budget compact standards. It starts up and can take a picture in comfortably under three seconds, and has a consistent shot-to-shot time of 2.7 seconds in single-shot mode. In continuous mode it shoots three frames in just under three seconds, but after that it slows down to one shot every 2.7 seconds. It has a high-speed continuous shooting mode that can shoot at three frames a second, but only at five megapixel resolution, and a 16-shot burst mode at 640 x 480 resolution.

The autofocus system is a bit on the slow side, but not to the point of annoyance. It is accurate and reliable though, and the face tracking is extremely quick and will track multiple faces. It even works well in dim light, at least up to a certain point. In the equivalent of a candle-lit room it just gives up even trying to focus and just presents you with a yellow warning sign, as if to say “Well, you’re on your own.” There’s no AF assist lamp either. That LED on the front panel is just an indicator for the self-timer.


So far so not bad, the RS1000 is looking like a decent cheap little camera with a silly but fun gimmick, but then unfortunately we come to image quality, and that’s where it all goes horribly wrong.


Pentax has always had an excellent reputation for its lens quality, and indeed its SLR lenses are second to none, but the horrible bit of glass on the front of the RS1000 does a major disservice to the brand name above it. It is soft even in the centre, and the uncorrected wide-angle images shown in the image review have so much barrel distortion they look like a comedy fish-eye filter. The parallels are partially corrected in processing, but this leaves the corners distorted and lacking detail, with the added attraction of glaring chromatic aberration. 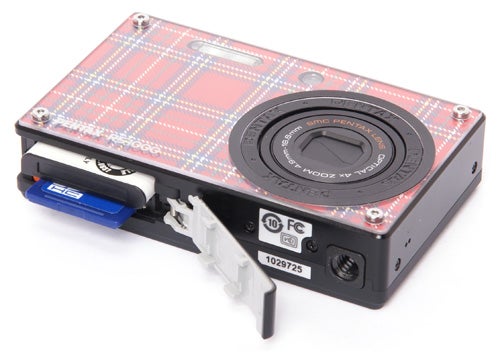 There’s a limit to how far image processing can go to compensate for a bad lens, and the RS1000 exceeds it. Images look over-processed, and lack fine detail. They are also heavily compressed, with file sizes averaging around 2.4MB despite the 14-megapixel sensor resolution. Colours are pale and washed out, dynamic range is very poor even with the Shadow Correction feature, and to make matters worse exposure metering is unreliable, under-exposing some shots and over-exposing others. Image noise is also a big problem, with significant noise and loss of detail at 400 ISO, while the advertised 6400 ISO maximum setting is pretty much useless. Even considering the RS1000’s low price this is very poor performance. There are budget compacts of around the same price that offer vastly superior results.

At the risk of using a cliché, the Pentax Optio RS1000 is an example of style over substance. The gimmick skinnable front is a cute idea, but unfortunately the camera behind it will disappoint anyone drawn in by the bright facade. Performance and build quality are decent for the price, but low-light ability and image quality are very poor, even compared to other budget cameras. 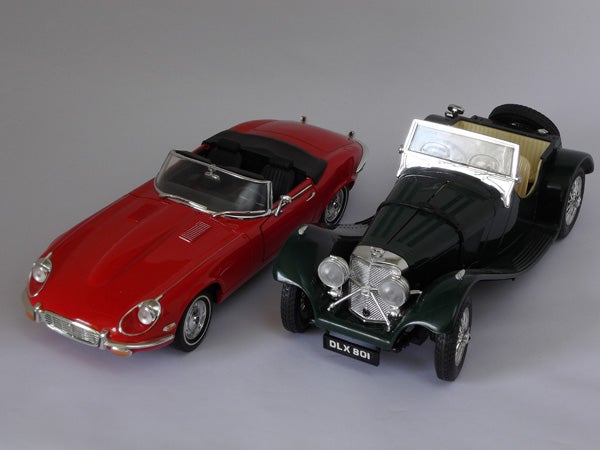 
At 100 ISO the image is relatively noise-free.


At 400 ISO the noise reduction has seriously reduced fine detail.


This is the full frame at maximum ISO.


Here’s the usual detail test shot of the West Window of Exeter Cathedral, for you to compare with other cameras. See below for a full res crop, or click to see the whole picture. File size 2.17MB.


The image quality is terrible even by budget compact standards.


The lens produces a lot of wide-angle distortion, but it is mostly digitally corrected in processing.


The corner suffers from pixellated digital distortion, as well as chromatic aberration from the lens.

Here are some general test shots to help evaluate the camera’s overall image quality, including dynamic range, colour rendition and the zoom range of the lens. Some pictures may be clicked to download the full size original image.


The wide-angle end is equivalent to 27.5mm.


The telephoto end is equivalent to 110mm.


Colour rendition is pale and undersaturated.