Since Pentax merged with the Hoya Corporation in 2007 there have been persistent rumours that the company’s Optio range of digital compact cameras would be cancelled, freeing resources for the development of its much more profitable digital SLR range. However these rumours seem to be unfounded, at least so far, because new Optio models continue to appear, such as this Optio P80, a stylish 12-megapixel ultra compact with a 4x zoom wide-angle lens. 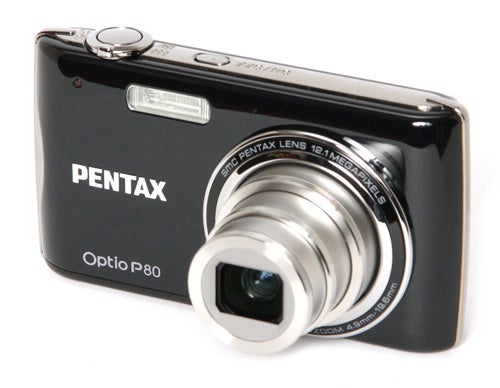 There may be some evidence that compact camera development isn’t as high a priority as it used to be though, because the P80 is virtually identical to the Optio P70, launched earlier this year. The only real upgrades are the video recording mode, increasing the frame rate of the 1280 x 720 mode from 15 to 30fps, and an improvement to the face detection/recognition function, which can now detect up to 32 faces, and do so more quickly. 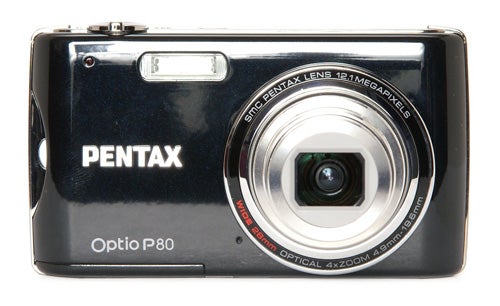 All of the camera’s other features remain unchanged, including the 12.1-megapixel CCD sensor, the 4x zoom wide-angle lens (equivalent to 27.5 – 110mm) and the 2.7-inch 230k monitor. The body is also identical to that of the P70. The P80 is a very slim and compact camera by any standard, measuring 97 x 54 x 21.5mm, and tipping the scales at an ultra-light 120g including battery and memory card. The body is all aluminium, and is available in either silver, metallic green or the attractive gloss black finish shown here. The build quality is as good as ever, but like the P70 the round-ended shape is hard to grip securely especially with sweaty fingers.

Pentax has been making ultra-compact cameras longer than most, and that experience shows in the P80’s simple but effective control layout. The rear panel has a D-pad and four buttons which, despite the camera’s dimensions, are relatively large and easy to use. Like most other Pentax cameras the P80 has a “Green Button” mode, an instant idiot-proof auto-everything setting suitable for quick snapshots. However for more experienced users the green button can be re-assigned to something more useful, such as ISO setting, white balance or metering mode. The P80 also incorporates more manual control than is often the case with point-and-shoot compacts. Saturation, sharpness and contrast are all adjustable, and the highlight and shadow correction can be selected independently. 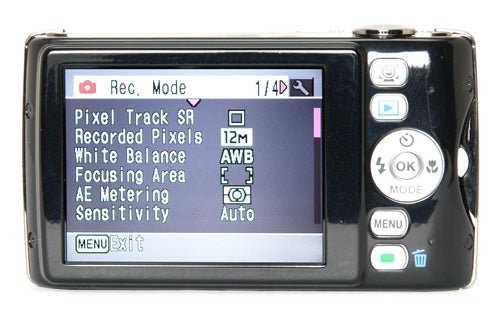 One feature that isn’t quite so impressive is the “Triple Anti-shake Protection”. Although this sounds impressive, it’s just another name for digital image stabilisation, plus a high-ISO setting to boost shutter speed. It does offer some advantage, but the results are nowhere near as sharp as the sensor-shift image stabilisation that Pentax uses in its DSLRs and more expensive compacts.


Like most of the budget compacts jumping on the HD video bandwagon, the actual video recording mode is nothing too special. The picture quality is reasonably good in decent light, but drops off quickly as the light dims. It is is restricted to digital zoom (up to 6.3x) and mono PCM audio through a non-directional internal microphone which picks up sound behind the camera just as loudly as from in front. Clips are limited to 11 minutes in HD mode, or just under four gigabytes using the bulky rather bulky file format. 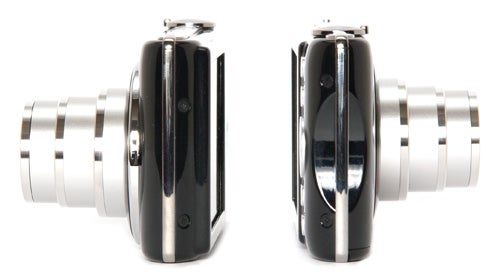 Like most Pentax compacts the P80 does have some fun features, such as the half-length portrait mode with automatic zooming to frame the shot, or a large selection of wonderfully tacky frame composites., but sadly the colour filters and digital effects found on some previous models have been omitted. There are several useful features in playback mode, including automatic cropping for portrait shots, and basic movie editing. The menu system is simple and easy to understand, and there are notes explaining what each scene mode does.

The P80 does have noticeably better overall performance than the P70, but unfortunately that’s not saying very much. Start-up time is fast enough at approximately 2.5 seconds, and it shuts down again in about 1.5 seconds, which is a big improvement. In single-shot mode the shot-to-shot time is now approximately 3.5 seconds, which is pretty slow but a whole second faster than the previous model. In continuous shooting mode it can take three pictures in a little under three seconds, but after that it takes around six seconds to empty the buffer before shooting another three shots. There is a high-speed burst mode that can take six shots in approximately three seconds, but it’s limited to 5MP. 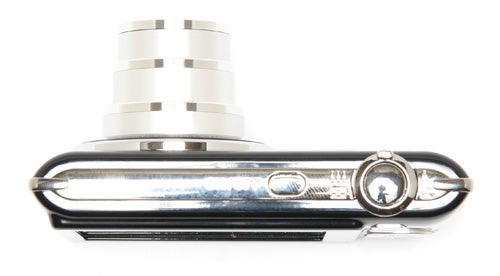 The autofocus system appears to be unchanged from the P70. It works quickly and accurately in good light, and while it does slow down in lower light it still copes well with pub/club light levels. There is still no AF assist lamp though, so it will only go so far.


Image quality is quite acceptable for a snapshot compact, with accurate light metering and colour reproduction. Dynamic range is slightly improved by the shadow correction and highlight correction features, but it’s still pretty limited, with murky shadows and burned-out highlights in very high contrast shots. The lens is also pretty good, with decent overall sharpness, but it seems to lack contrast. Wide-angle distortion is corrected electronically, which does produce some corner blurring, and there is also a little blue-green chromatic aberration at the edges of the frame, but it’s not too horrible, and I’ve seen a lot worse from more expensive cameras. Image noise is not so well controlled however, with visible noise even at the minimum 125 ISO sensitivity. The P80 has a maximum sensitivity of an impressive 6400 ISO, but this and 3200 ISO are only available at 5MP image size, and the quality is pretty grim.

For under £140 the Pentax Optio P80 is a very slim and stylish ultra-compact camera that is easy to use, well made and equipped with a decent list of features including HD video recording and a good wide-angle lens. However its overall performance is quite slow, and overall image quality leaves something to be desired. 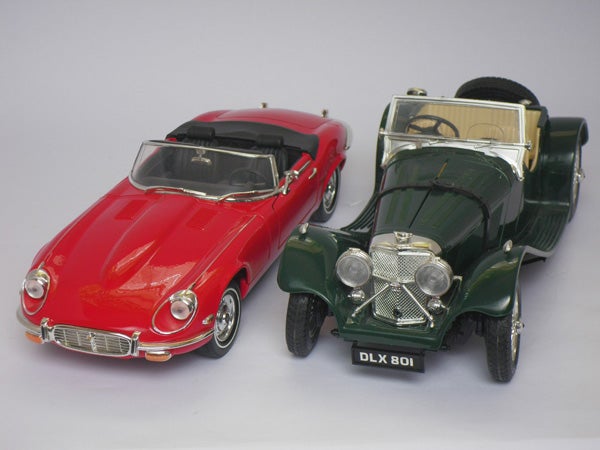 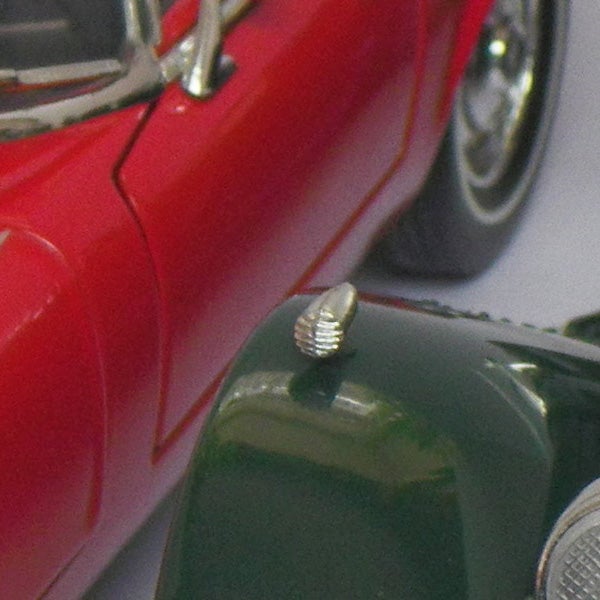 Even at the lowest sensitivity setting there is visible noise. 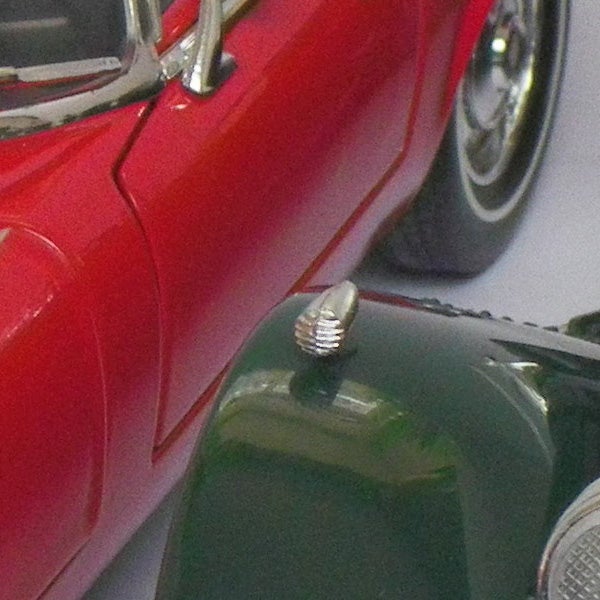 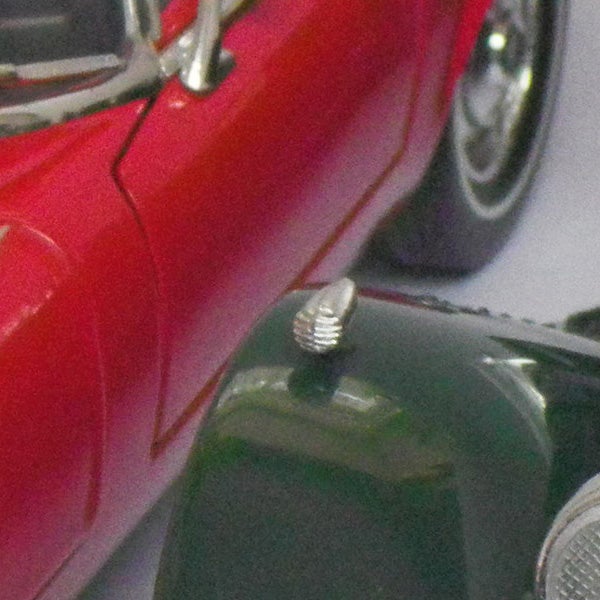 Colour is starting to fade, and looks very mottled at 400 ISO. 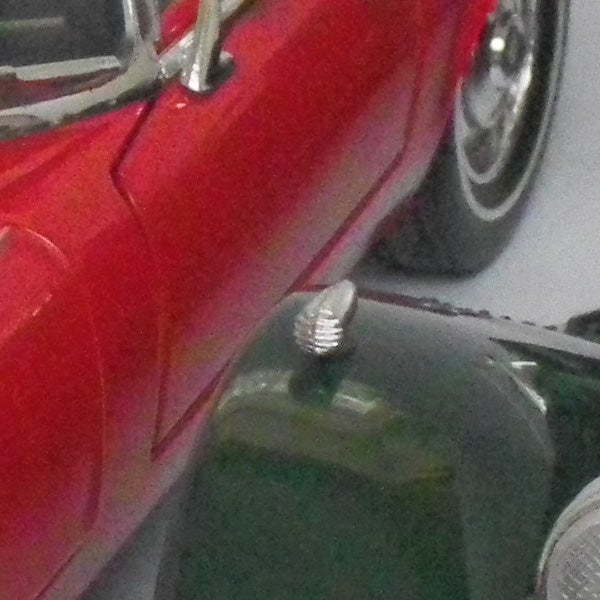 Colour depth and detail are lost at 800 ISO. 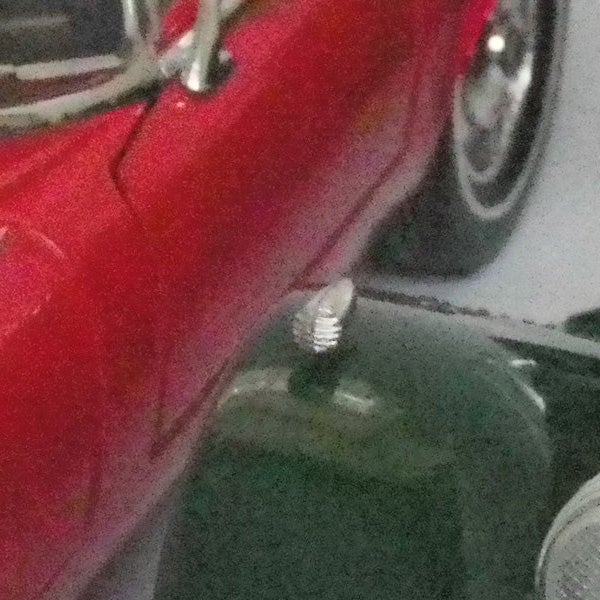 Very noisy results at 1600 ISO, but at least the colour’s back. 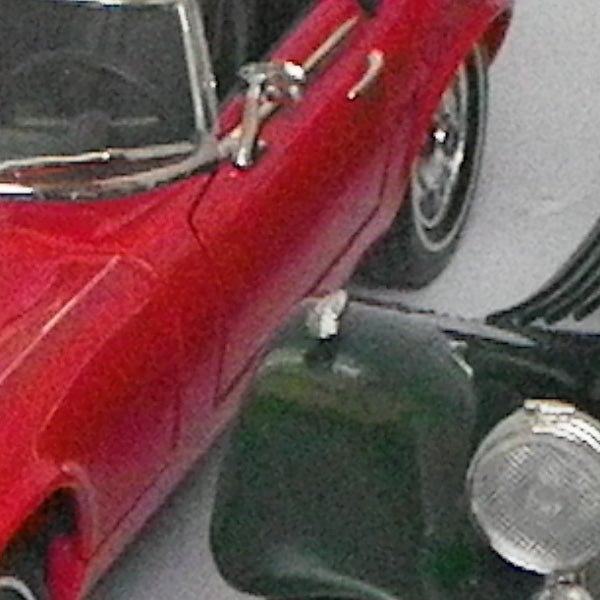 3200 ISO is available at 5MP, but it’s not much better than phone camera quality. 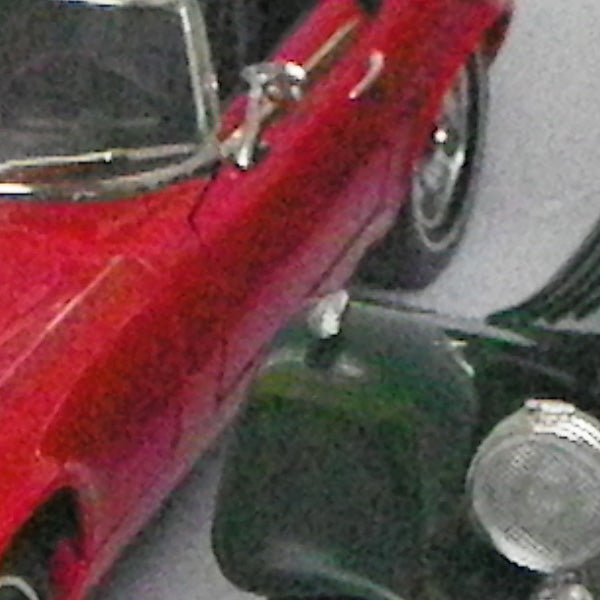 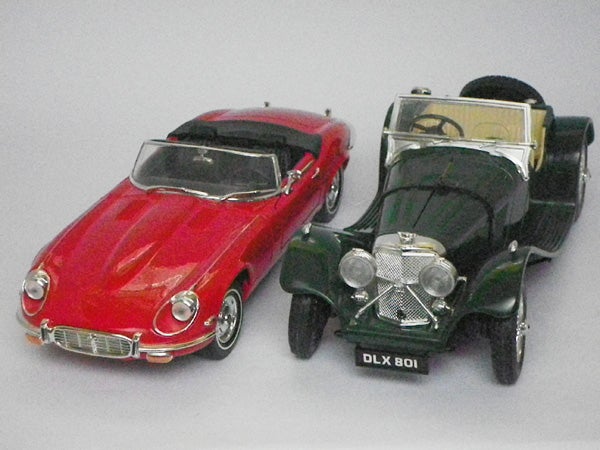 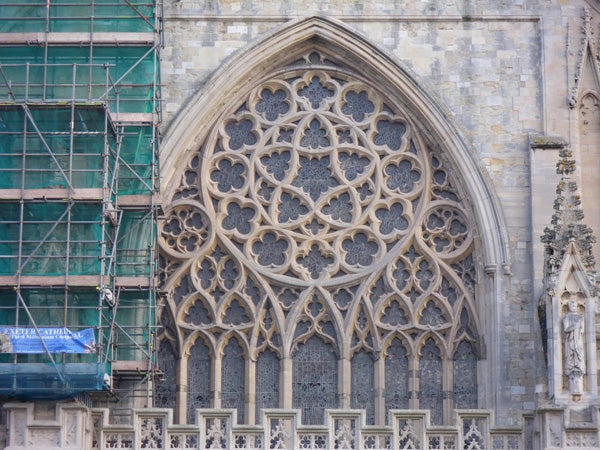 Here’s the usual detail test shot of the West Window of Exeter Cathedral, for you to compare with other cameras. See below for a full res crop, or click to see the whole picture. File size: 2.1MB 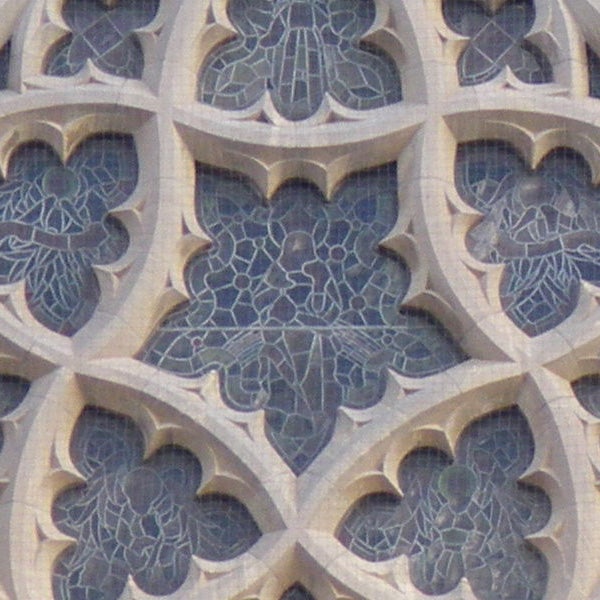 The heavy file compression and mediocre lens quality limit the recorded detail, but the overcast weather conditions didn’t help either. 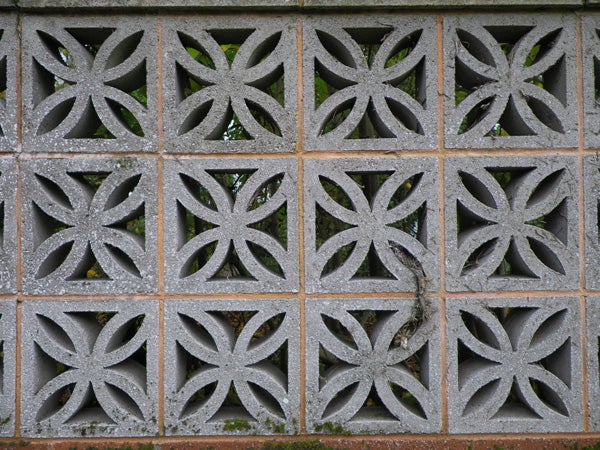 The lens produces quite a lot of wide angle distortion, but it is is corrected electronically. 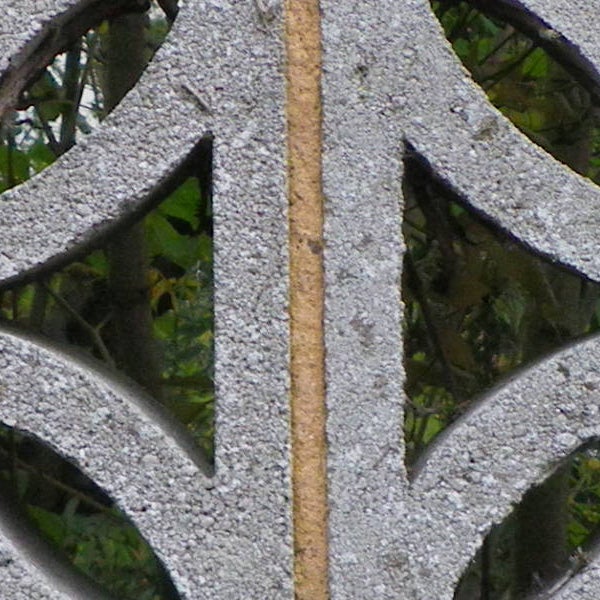 Centre sharpness is reasonably good, but a bit lacking in contrast. 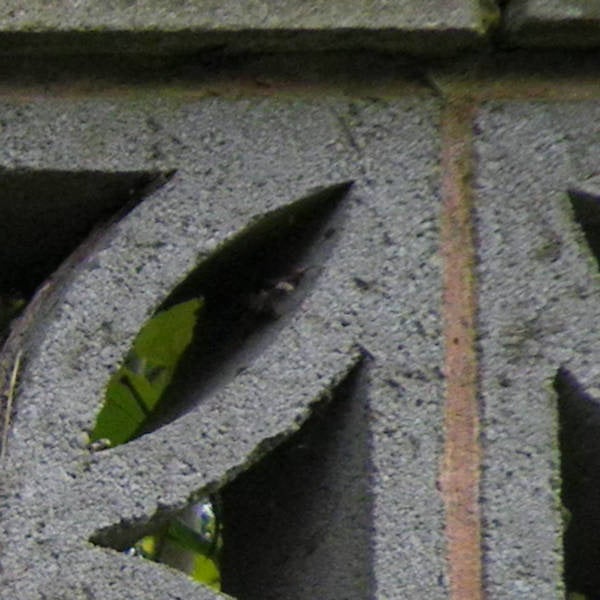 There is some corner blurring and a trace of CA, but it’s pretty minor. 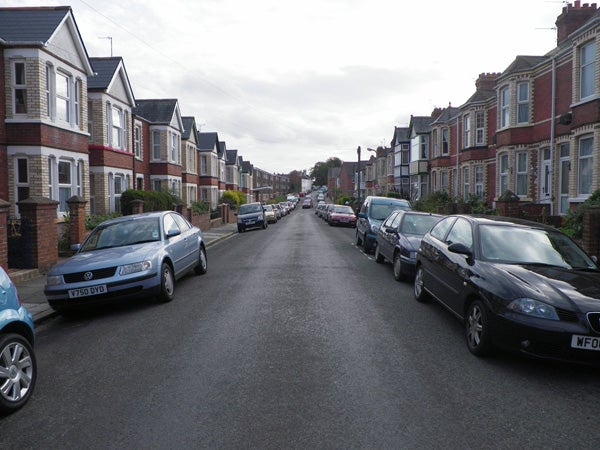 The wide angle end is equivalent to 27.5mm, wider than the average compact. 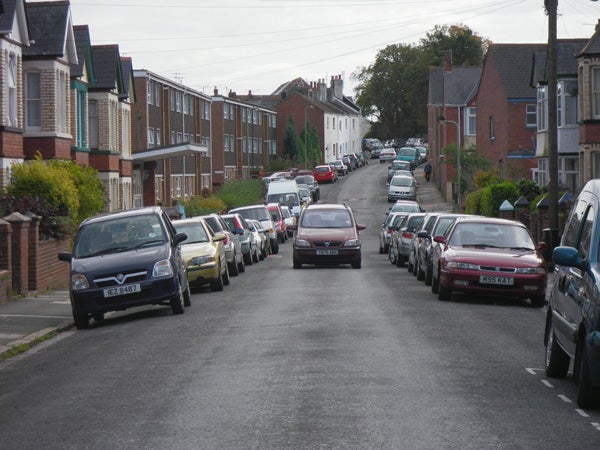 The telephoto end of the 4x zoom is equivalent to 110mm, about what you’d get from an older 3x zoom. 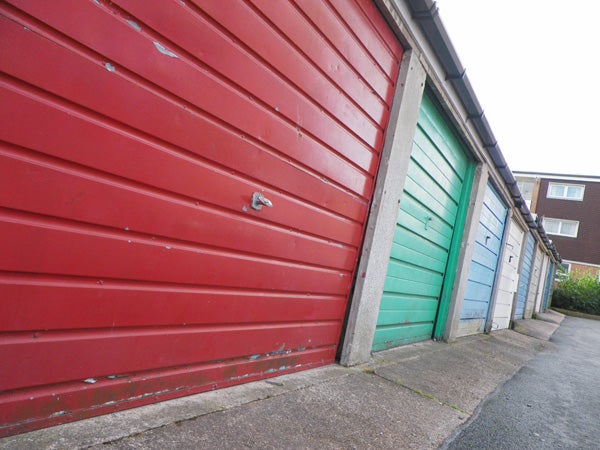 Colour rendition is quite natural despite the grey miserable weather. 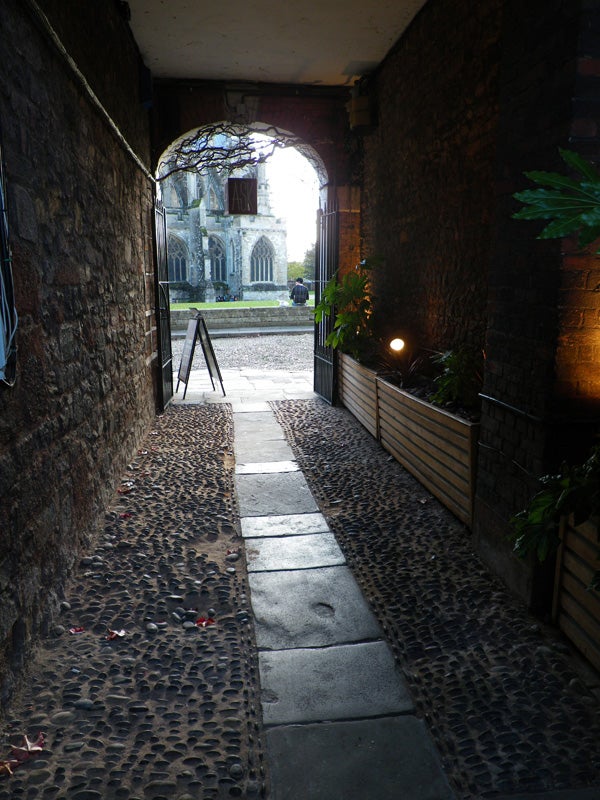 This was taken with the dynamic range boosters turned off. 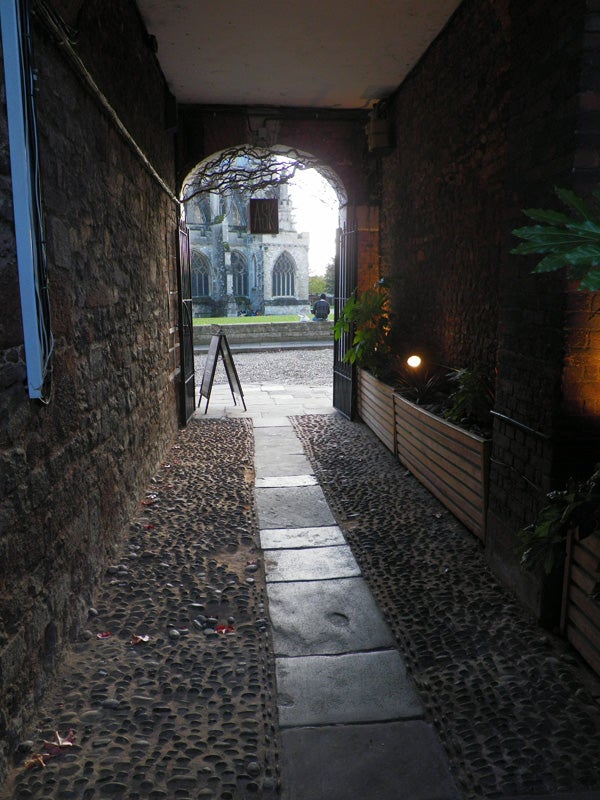 This was taken with both highlight and shadow correction turned on. It’s a little better, but not much. Well it makes a change from flowers or boats.