It’s been a while since I’ve reviewed any of Pentax’s Optio pocket compacts, so today I’m taking a look at one of the most recent, the super-slim Optio M30. 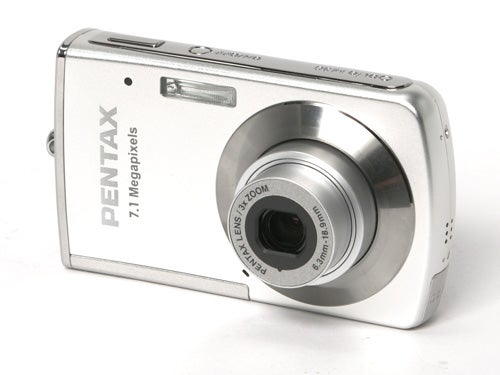 
Measuring a diminutive 57 x 97 x 18mm and weighing in at only 135g including battery and card, the M30 is one of the slimmest and lightest cameras on the market. However despite its delicate appearance and low weight, it is a solidly made camera with Pentax’s usual excellent build quality. The body is all metal, an attractive anodised aluminium case that resists finger marks, with chrome trim which does show up fingerprints but is easy to wipe clean. Only the battery/card hatch is made of plastic, but even this has metal hinges. The shape of the body flares out slightly toward the right hand side, so despite its slim profile it is easy to grip securely. There is a small textured area on the back to provide a thumb grip. 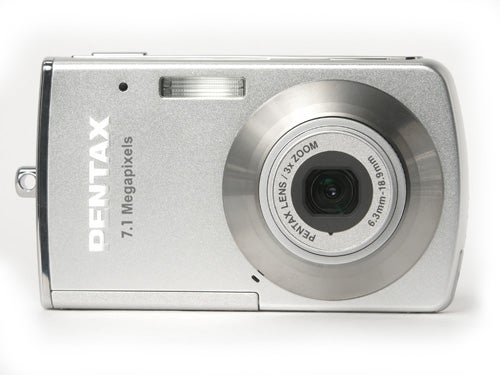 The LCD monitor is large and bright, but with only 115,000 pixels it’s not the sharpest around. It also lacks the useful feature of a non-reflective coating, so glare can be a problem in bright sunlight.

As you might expect from its low price, the M30 has a distinctly limited range of features. It only has automatic exposure, and a fairly small list of program scene modes which covers only the bare essentials of portrait, landscape, sports, night scene, flowers, surf & snow, kids, pets, food, and of course that old Pentax favourite, the risible “Frame Composite” mode, which puts cheesy borders around your pictures. It also has a mode optimistically called “Digital SR”, or shake reduction. This simply increases the ISO setting to around 1000 to increase shutter speed, reducing the effects of camera shake and movement blur at the cost of increased image noise. 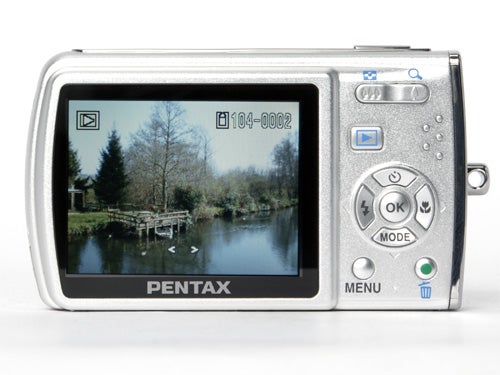 There are one or two additional features though, including optional manual focus and adjustable contrast, sharpness and saturation. There are a few more features available in playback mode, particularly another Pentax favourite, digital colour filters, including colour exclusion filters that will reduce a picture to monochrome with the exception of a single colour, sometimes referred to as the “Schindler’s List” effect.


Overall performance has previously been something of a bugbear for some Pentax compacts, but the M30 shows significant improvements in this direction. It starts up in a little over two and a half seconds, which is about average for a camera in this class but a lot quicker than some previous Optio models. Shut down time is a bit quicker at just under two seconds.


In continuous shooting mode performance is rather more encouraging. It can shoot at a rate of one frame every 0.7 seconds for the first ten frames, but then slows to about one frame a second, which it can maintain until the card is full. The movie mode is also up to scratch, shooting at 640 x 480 resolution and 30fps. 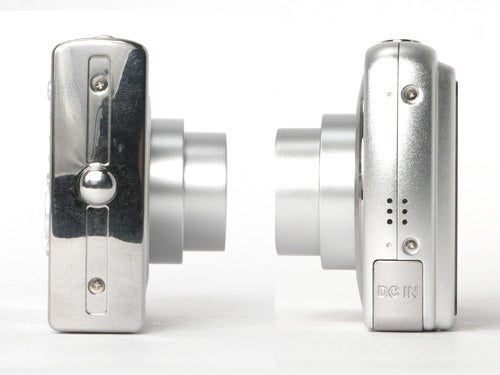 The AF system is very good in normal light, finding focus in well under a second at average ranges in daylight, but once light levels drop the focusing time gets a lot slower. In average indoor lighting it takes around two seconds to focus, and in pub/club lighting it often won’t focus at all since it has no AF assist lamp, although the default focus setting is usually adequate for group photos. The flash is good though, with a quick recharge time, excellent frame coverage and a big 5.5m range at standard ISO settings. Flash metering is good, and it doesn’t over-expose at close range.

Battery life is also good. The camera is powered by a small 740mAh Li-ion rechargeable battery, for which Pentax claims 230 shots on a full charge. I took about 150 shots before the charge meter dropped from three bars to two, so this claim sounds reasonable.


In maximum quality mode the M30 produces files that are around 2.5MB in size, which is very small for a 7MP camera, allowing around 280 pictures to fit on a 1GB card, or just over 15 minutes of video shooting. 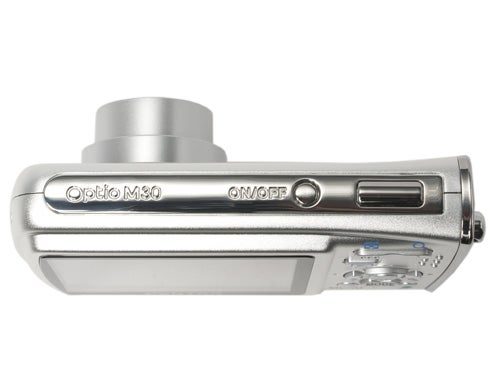 Unfortunately this heavy file compression does nothing to help with picture quality, which is a pity because the M30 needs all the help it can get in this department. Unusually for a Pentax camera the main cause of image quality problems is the lens, which causes heavy barrel distortion at wide angle, and pincushion distortion combined with appallingly bad corner blurring at medium zoom settings and close range. At ranges longer than a few metres optical performance is better, but still far from good. I hope that this isn’t a general problem with Pentax’s updated sliding lens system, because it is used on many other cameras in the company’s current range. I’ve got the Optio E30 to test next week, so I’ll be looking out for it.


Also causing major problems in many shots was our old friend the purple fringe, although this appeared inconsistently, sometimes present on one shot but not on another similar shot. There were also some strange red fringes on a few pictures, which didn’t look like chromatic aberration. Possibly this could be some filtering system to reduce purple fringing.


Noise control however was very good, producing quite acceptable results up to ISO 400, and usable shots at 800 and 1600 ISO. At the maximum 3200 ISO the noise levels were too high to be used, but the same is true of most cameras offering this high sensitivity setting. 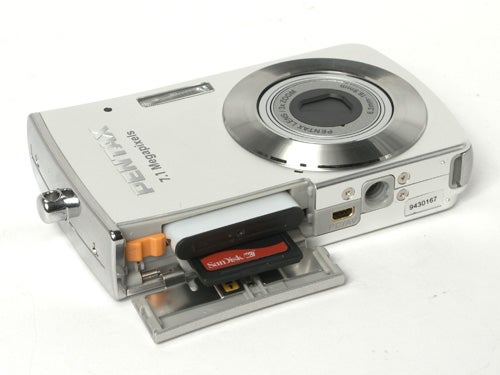 Apart from the lens quality issues, overall exposure was fairly good under most circumstances. There were one or two few hiccups when shooting in very high contrast situations, when the limited dynamic range of the sensor caused many burned-out highlights, but on the whole the camera coped fairly well with most usual circumstances. Colour rendition was also reasonably good, with detail visible even in areas of bright colour.

The Pentax Optio M30 is the latest in a long line of low-cost, easy-to-use and extremely stylish pocket compacts. It is well made, well designed and has reasonably good performance, but it is let down by poor low-light capability and some worrying image quality issues, particularly very bad lens distortion under some circumstances. If you want an ultra-slim 7MP camera, save up a bit more and get the Casio EX-S770 instead. 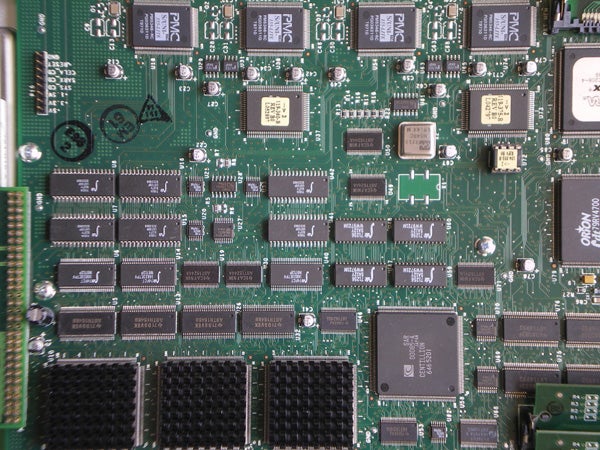 This is the re-sized test shot for 64 ISO. I don’t normally include a caption with this shot, but I felt it was necessary in this case. The shot was taken at a range of approximately 50cm using a medium zoom setting. As you can see there is noticeable pincushion distortion and exceptionally bad blurring away from the centre of the frame. 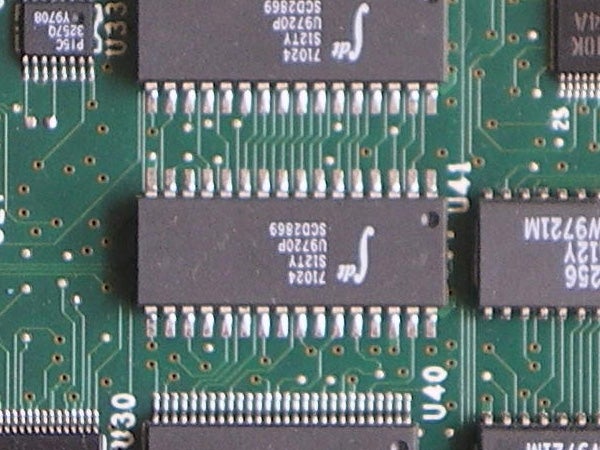 Whatever the lens distortion problems, at the centre of the frame the level of detail at 640 ISO is good, with no visible noise. 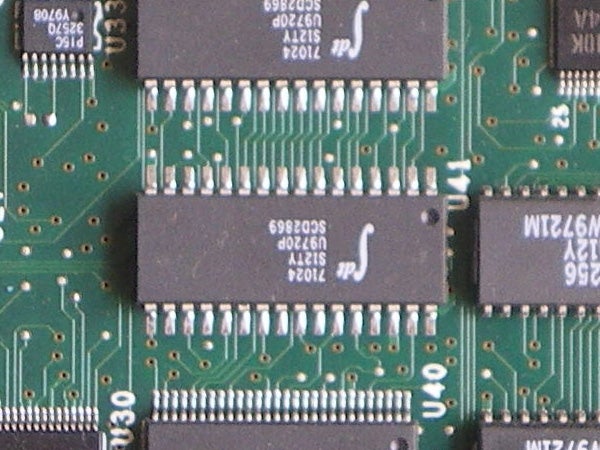 At 100 ISO there is also no visible noise, and the picture is clear and sharp. 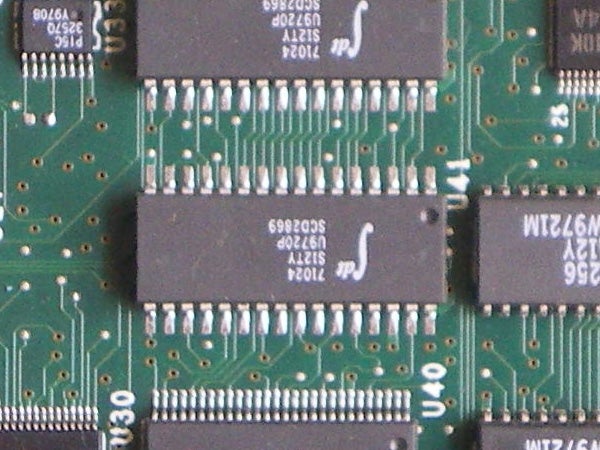 At 200 ISO there are still no image noise problems, and the level of detail is high. 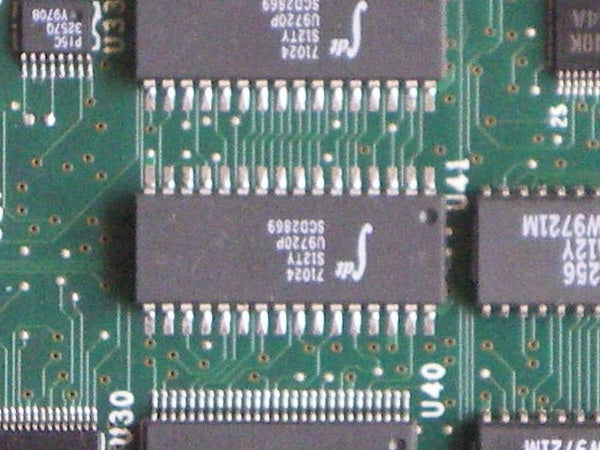 At 400 ISO there is some visible noise, and the level of fine detail is noticeably reduced, but picture quality is still very good. 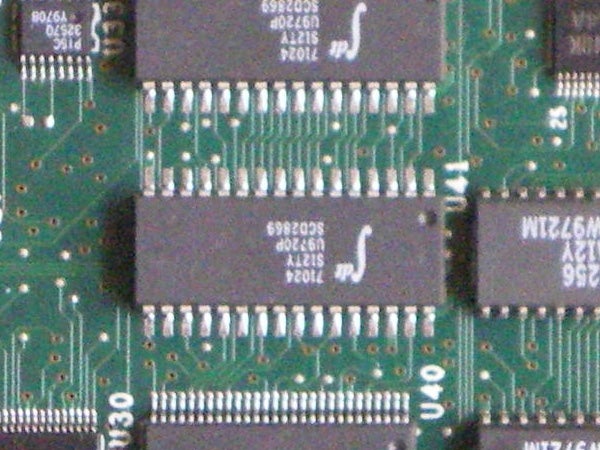 At 800 ISO the noise reduction system is still just about coping, and although there is some colour distortion and loss of fine detail the image is still perfectly usable for small prints. 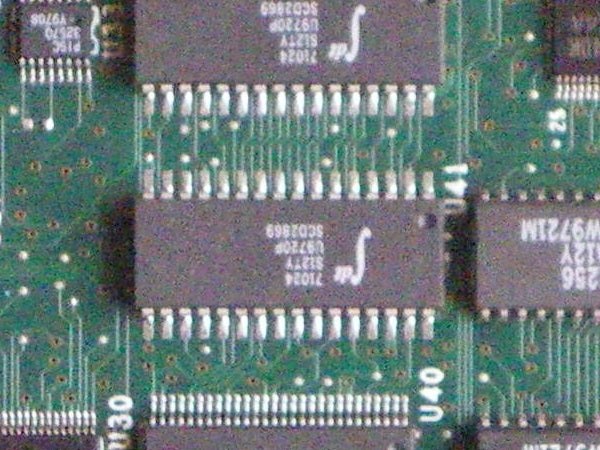 At 1600 ISO there is a sudden drop-off in picture quality, with a lot of noise and loss of detail, but the picture is actually still not too bad and would make an acceptable 6 x 4 print. 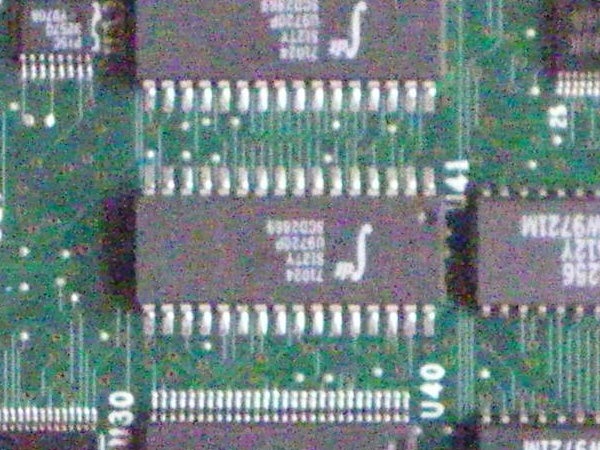 As with many cameras, the highest ISO setting of 3200 is really not recommended. There is a lot of noise and not much fine detail, and even on a small print the picture would look grainy.

”A range of test shots are shown over the next two pages. Here, the full size image has been reduced for bandwidth purposes, and a crop taken from the original full resolution image has been placed below it in order for you to gain an appreciation of the overall quality.


Full-sized versions of some of the following images can be downloaded by clicking on the sample shots as indicated. However be aware that the average file size is around 2.4MB, so those on very slow connections will experience some delay.” 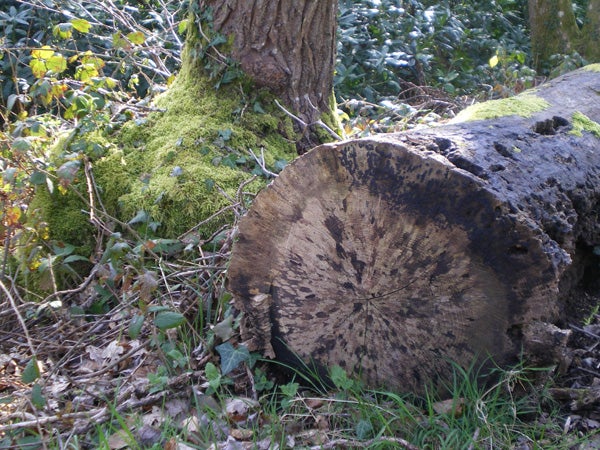 Not my usual shot of the cathedral today, but from this shot you can see the level of detail recorded by the M30. It’s about average for a 7MP camera. 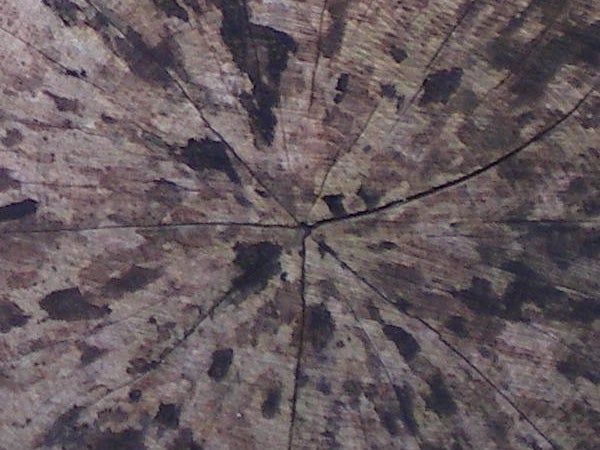 This is a full-sized crop from near the centre of the above image. 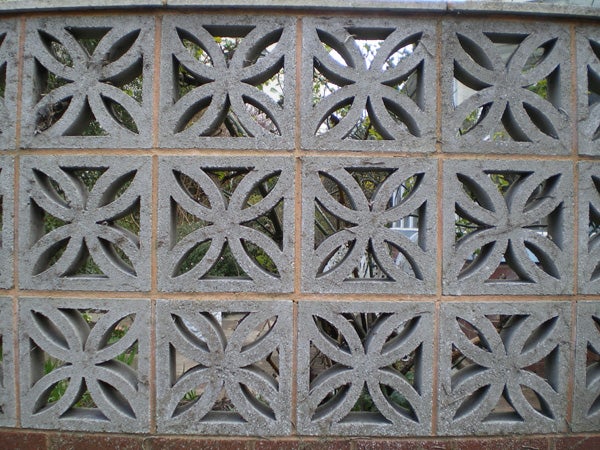 In this shot, taken at the widest angle zoom setting and a range of about two metres you can see that the M30’s lens produces quite a lot of barrel distortion under these conditions. 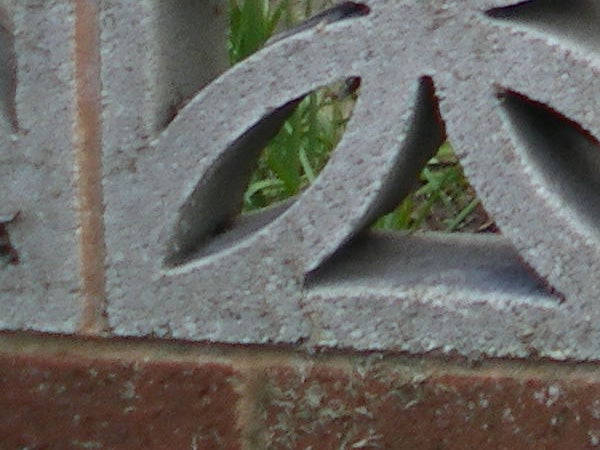 This is a full-sized crop from the bottom left corner of the above image, showing poor corner sharpness. 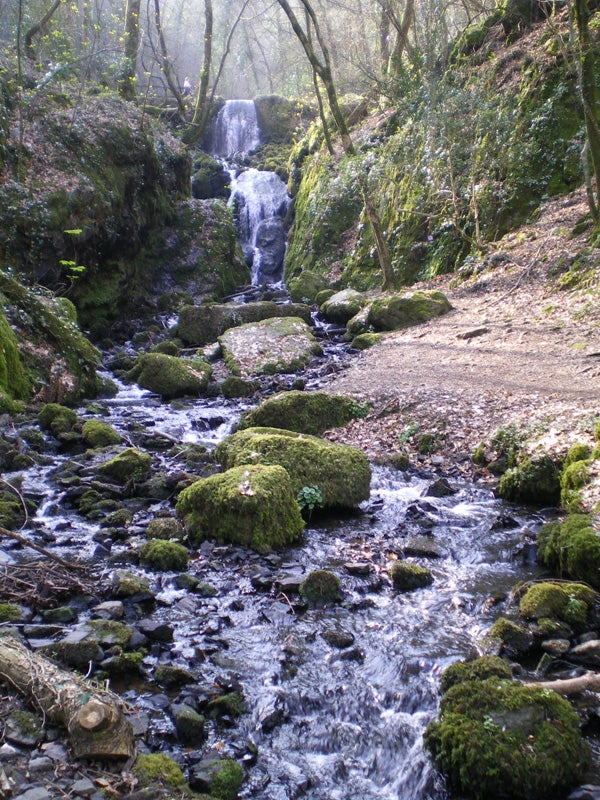 The widest angle setting of the zoom lens is equivalent to 38mm on a 135 film camera, not very wide but about average for a camera of this type. 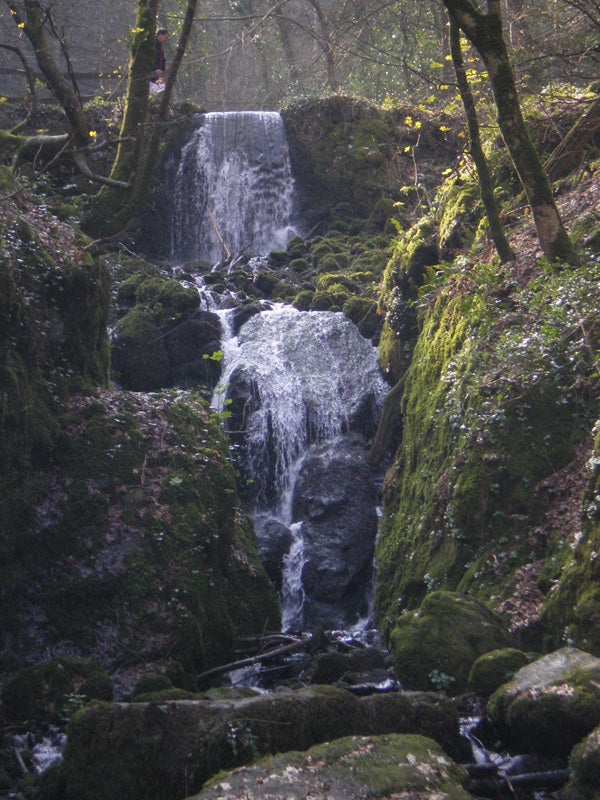 This shot was taken from the same position as the wide-angle shot above, but this time at the other end of the zoom range, equivalent to 114mm. 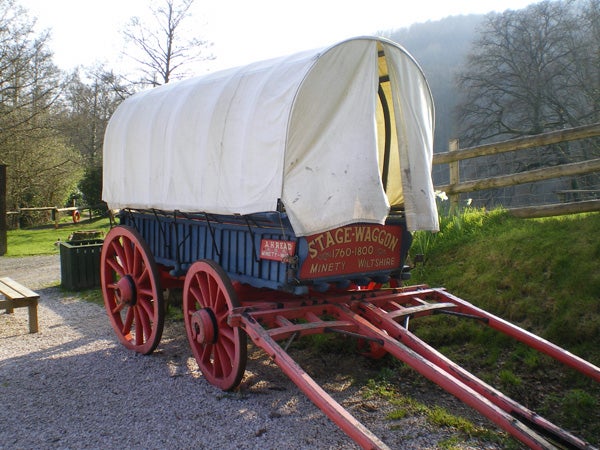 Colour rendition is good, despite shooting into the light. 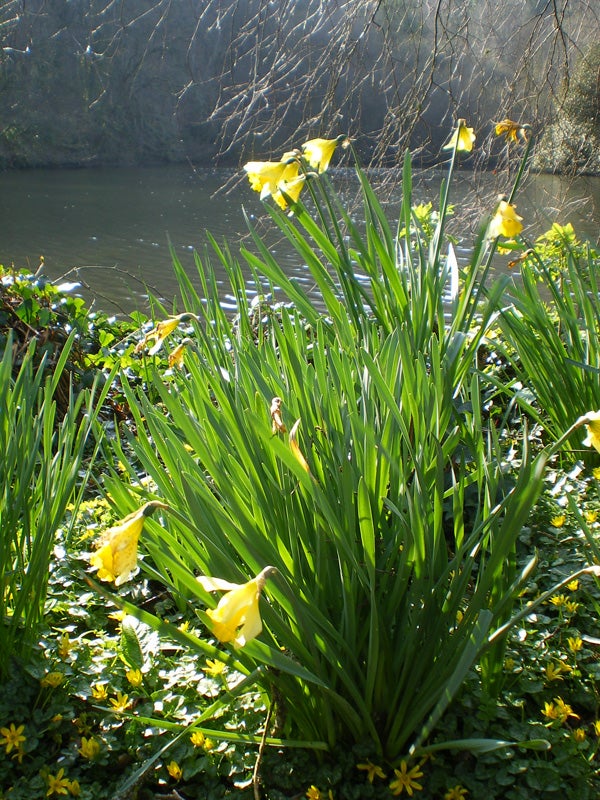 Again shooting into the low-angled sunlight, the M30’s exposure system has coped well producing a good image with plenty of rich colour. 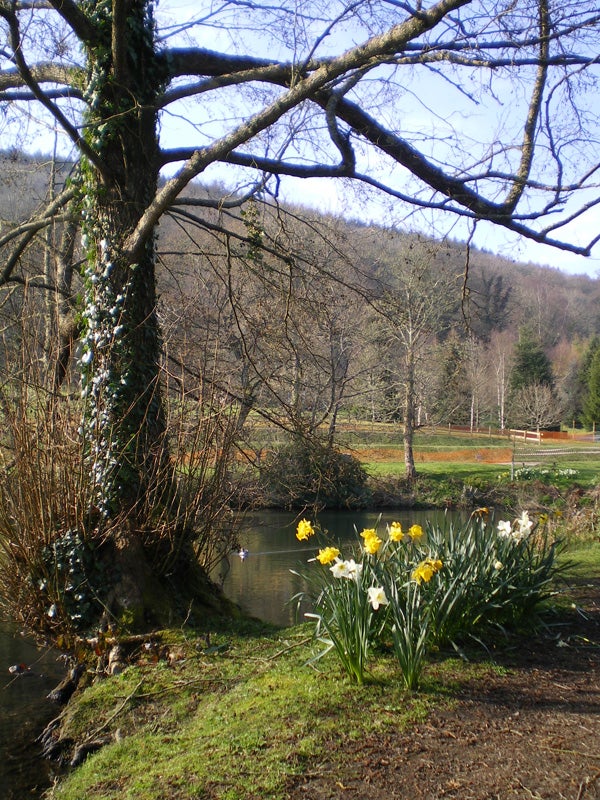 Although the exposure is good and the colours are well-saturated, this shot shows bad purple fringing around the highlights. See the crop below for more detail. 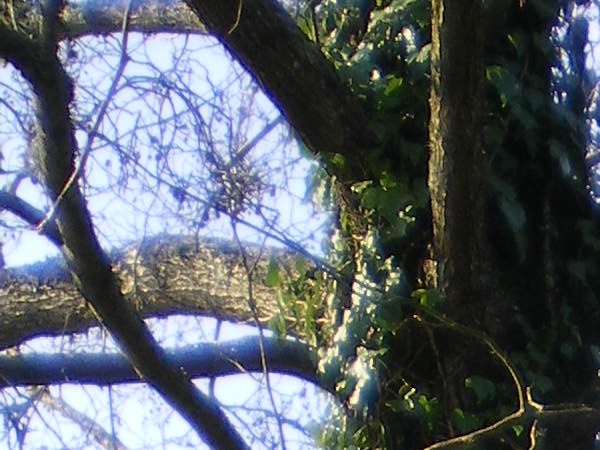 This is a crop from the upper left of the above image, showing more clearly the large purple fringes.