Back in April I reviewed the then-new Pentax Optio E30 a couple of weeks after reviewing a fairly similar budget compact from Nikon, the Coolpix L10. This week I’m taking a look at the new Pentax Optio E40, just a week after I reviewed the Nikon Coolpix L11. It’s interesting to see just how similar the two cameras are, although perhaps not too surprising, since they are both entry-level point-and-shoot compact cameras running on two AA batteries. 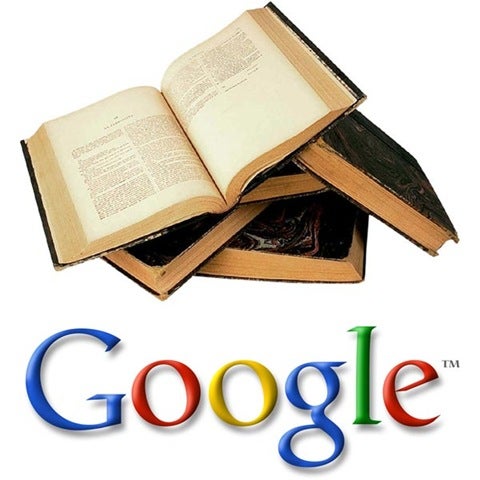 There are very few 8-megapixel cameras available for under £100. The E40’s only competitors are the Fujifilm FinePix A820 and the Samsung S85, both of which are currently selling for around £99. Since the Optio E40 is currently available for around £90 it undercuts even these two bargain-basement models. Of course £90 doesn’t buy you a whole lot of camera, but despite that the E40 is surprisingly well specified. It has an 8.1-megapixel sensor, 3x optical zoom lens and a 2.4-inch monitor, as well as face detection AF and 30fps VGA video mode. 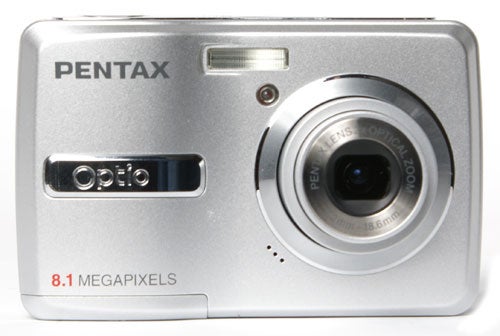 While the Optio E40 is clearly a development from the E30, it is not simply a case of a new sensor in an old camera. It has a completely new body, and more importantly a new lens as well, which might go some way to improving on the E30’s rather disappointing image quality. It’s still a 3x zoom lens, but the zoom range is now equivalent to 37.5-112.5mm, rather than the 36-108mm range of the earlier model. It is also slightly slower, with a maximum aperture of f/3.8-5.6 instead of f/2.7-4.8. While both of these factors would seem to be a step backwards, it’s the overall optical quality that’s important. We’ll come back to that later.

The body is still plastic of course, but it is very strong with no creaks of flexing even when squeezed hard. It is a lot more attractive than the previous model, and looks more expensive than it is. It’s much slimmer than the E30, measuring approximately 28mm at the thickest point, which isn’t bad for a camera powered by AA batteries. The thicker right-hand end makes the camera very comfortable to hold, and the raised detail on the front panel works to some extent as a finger grip. The loose battery hatch problem from the E30 has been solved, and the new cover has a strong metal hinge and closes securely. All in all the design, build quality and handling are very impressive for a budget camera. 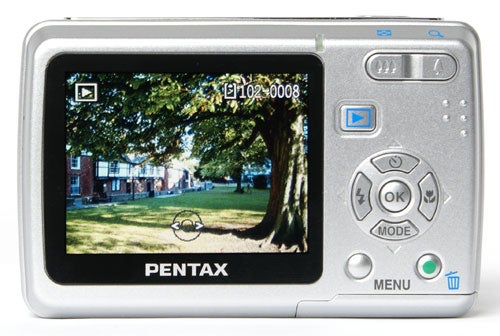 With the new sensor comes a higher maximum ISO setting, up from 400 to 1000, but some of the camera’s other features are identical to the E30. The monitor screen is still a bit of a weak point, and appears to be the same 110,000-pixel unit from the E30. It’s a bit dim and lacking in contrast by recent standards, and the refresh rate could be a bit quicker, but it does the job – just. Several other features are also unchanged from the E30, as a glance at the virtually identical controls will reveal, but then these are features that are common to most of Pentax’s compact cameras. It has the useful Auto Picture mode, which automatically selects the appropriate scene mode for the type of picture being taken, as well as manual selection of program exposure, night scene and ten other scene modes, including the inevitable frame composite mode, panorama stitching and a high-ISO anti-shake mode. 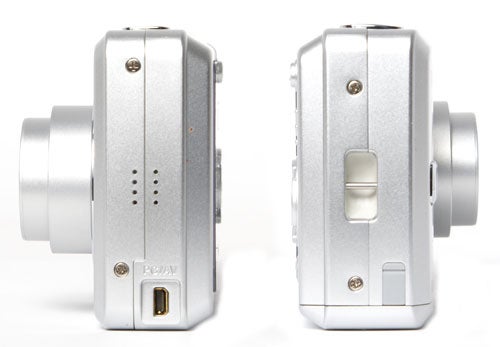 As well as this, the menu options include wide area, spot and continuous AF, exposure compensation, and adjustable sharpness, saturation and contrast. The D-pad buttons control a two- or ten-second self timer, continuous shooting, 16-shot burst mode, several focus modes including macro, landscape, pan focus and even manual focus, and the usual selection of flash modes. It’s not an extensive list of features, but it is more than most low-cost digital cameras offer.

Where the E40 does start to reveal its limitations is in overall performance. It takes nearly five seconds to start up, although it shuts down rather faster in just over two seconds. Shot-to-shot time is under two seconds for the first three or four shots, but then slows down noticeably as the image buffer fills up and has to wait until it has written to the memory card. Even using a high-speed SanDisk Ultra II SD card the average shot-to-shot time over ten shots was nearly four seconds. Likewise in continuous shooting mode it shoots the first three shots in under two seconds, but then slows right down to one shot every four seconds for subsequent exposures, and annoyingly the monitor screen remains black as long as the shutter is held down.

As with most low-end Pentax models, the autofocus system is quite slow, taking over a second to lock on in good light, and even longer in dim light. However the E40 is equipped with an AF assist lamp, and while low light focusing may be slow it is at least reliable, and will work in total darkness at a range of several metres. Other performance criteria are also adequate, including flash range, which is an excellent 4.3m at normal ISO settings, and the movie mode, which is slightly improved from the E30, and now offers a full 30fps at 640×480 resolution. Battery life also seems to be good, although as always with AA-powered cameras the actual performance will depend on the quality of the batteries used. Using the two standard alkaline batteries that were supplied with the camera I was able to take over 100 shots before the battery level indicator changed from three bars to two. 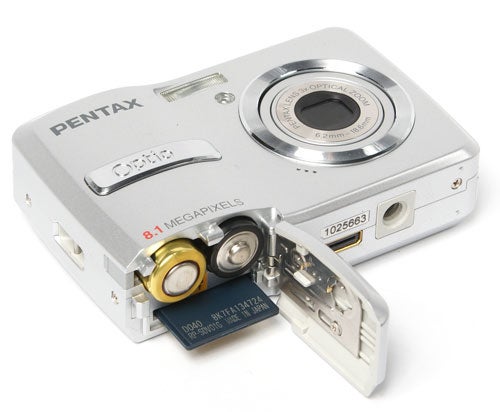 Picture quality is much improved over the E30, although it is still not without its problems, some of them quite serious. Exposure and colour rendition are better, and dynamic range is also good, especially with highlight detail, something that was a weak spot for the E30, however I found image noise to be a major problem at all ISO settings, even the minimum of 80 ISO. There was visible image noise in the darker areas of every shot, which robbed the images of a lot of fine detail and introduced colour irregularities. This is doubly annoying, because the new lens appears to be significantly better than the old one, with good edge-to-edge sharpness, no chromatic aberration and relatively little barrel distortion at the wide-angle end. However I did also notice some slight vignetting, with the corners of some wide-angle shots noticeably darker than the centre of the frame.

For a rock-bottom price the Pentax Optio E40 offers good build quality, elegant design and a surprisingly complete set of features. Performance is a bit on the slow side, but it will reliably take usable pictures in most lighting conditions. Where it falls down however is on final image quality, with noise problems at all ISO settings, and vignetting is also an issue. 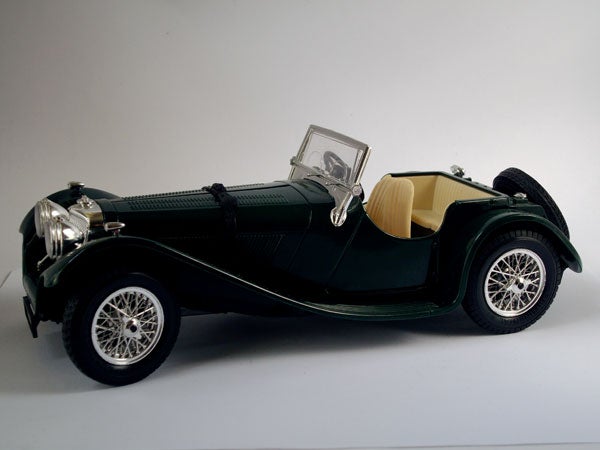 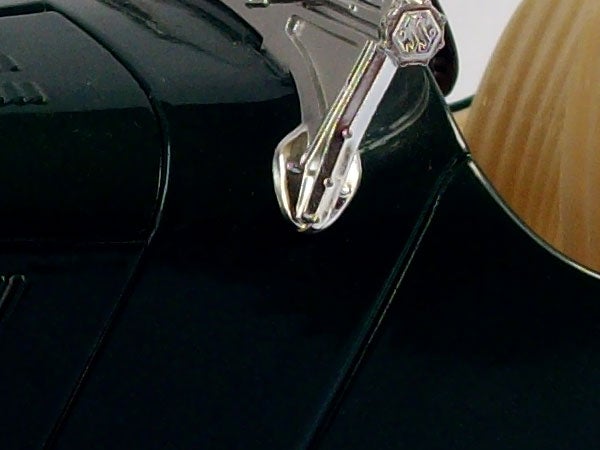 If you look at the upper part of this shot, you’ll see image noise even at the ISO 80 setting. 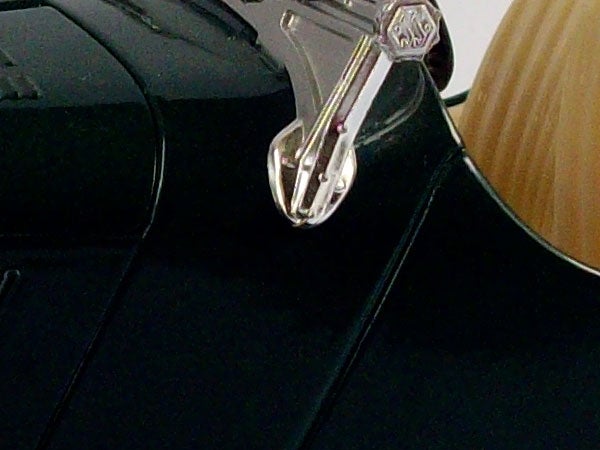 Noise is noticeably worse at ISO 160. 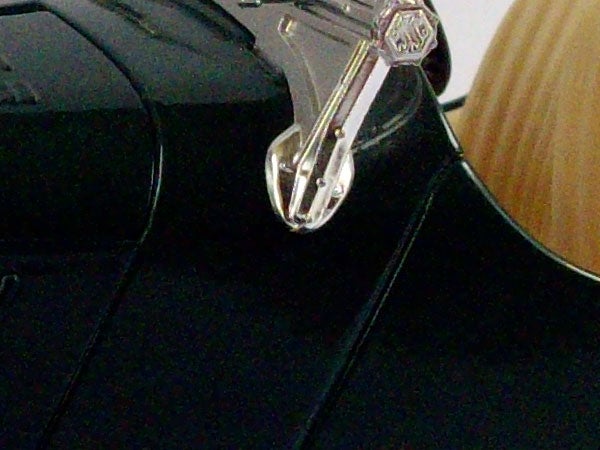 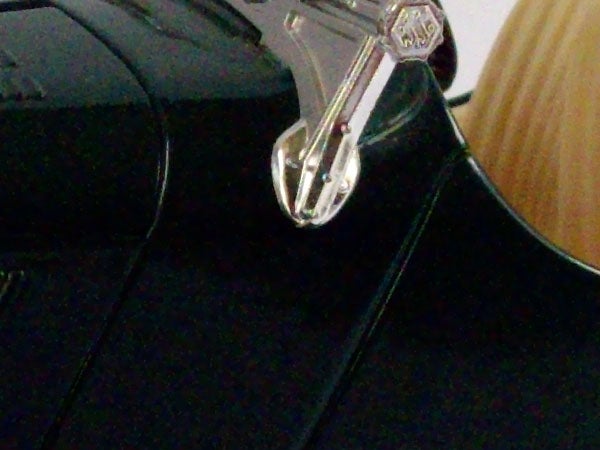 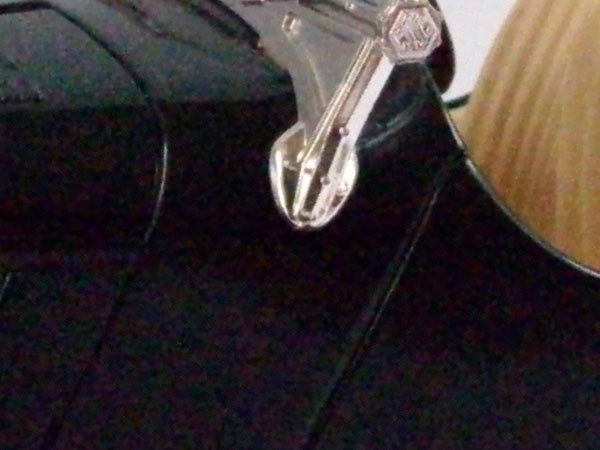 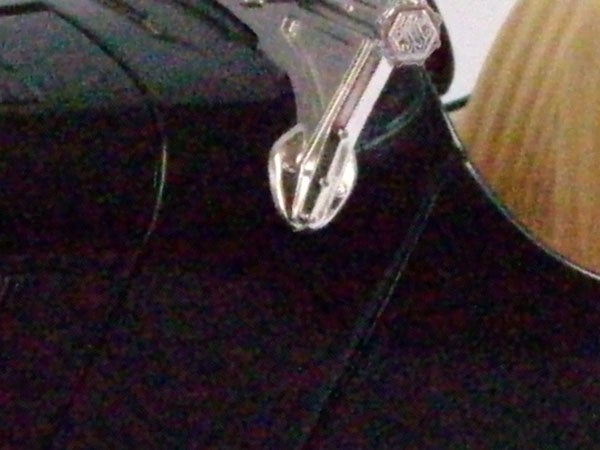 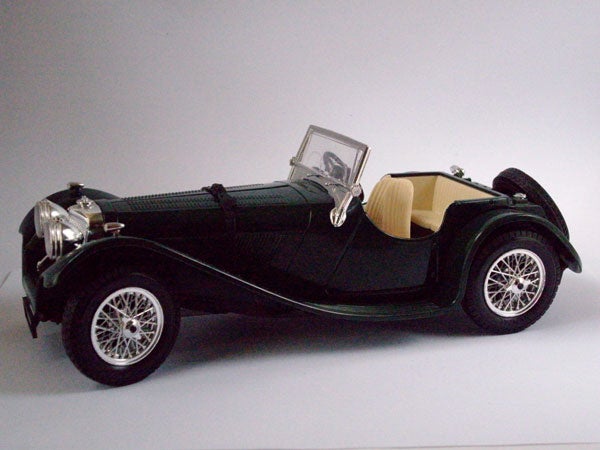 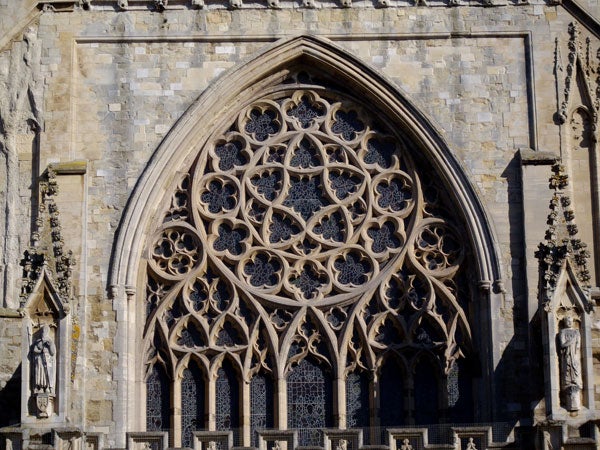 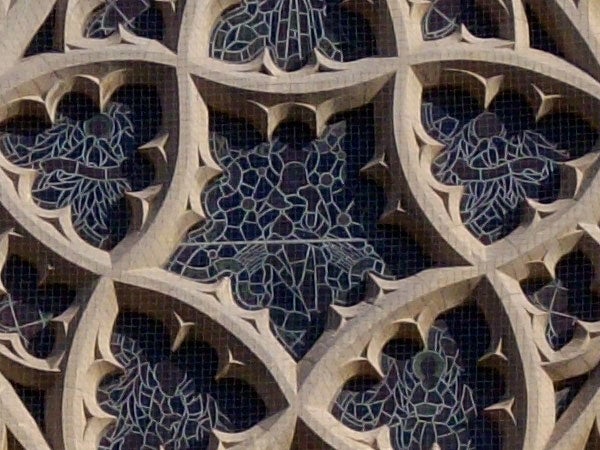 The new lens provides good detail, but it is swallowed up by the image noise even in this low-ISO shot. 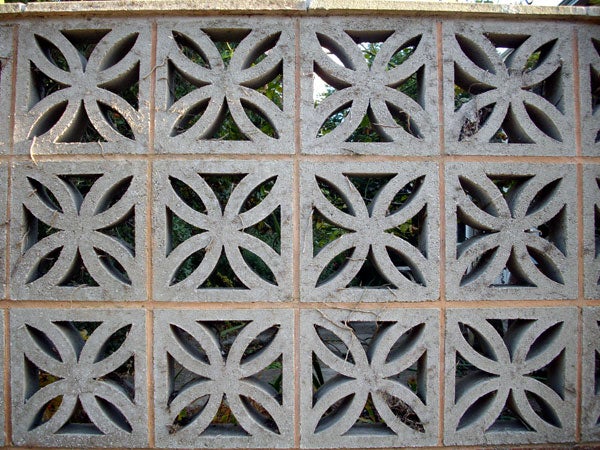 The lens produces some barrel distortion at wide angle, but it’s not too horrible. 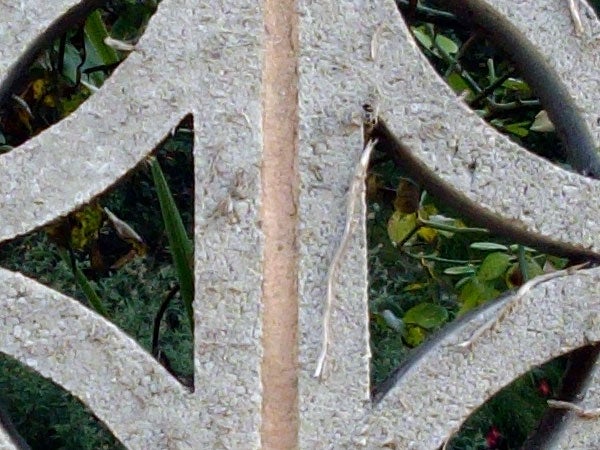 Centre sharpness is good, but again image noise is visible in the darker areas. 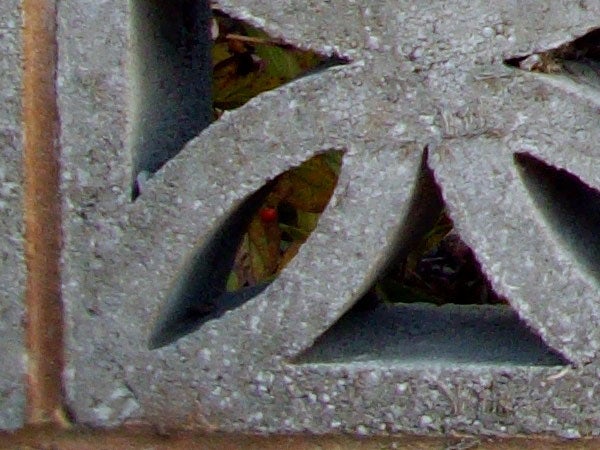 Edge sharpness is also very good, with no chromatic aberration. 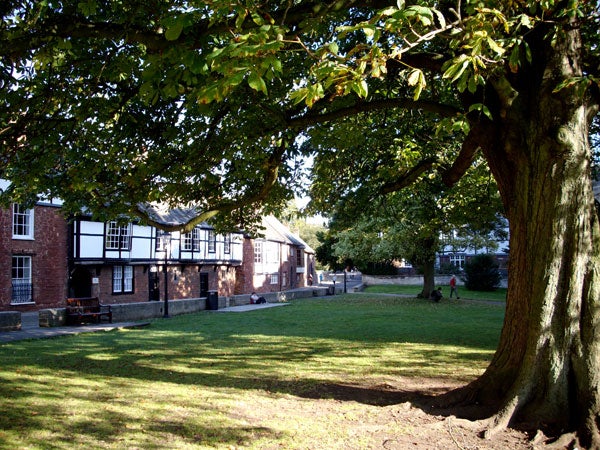 The wide-angle end of the zoom range is equivalent to 37.5mm, which is not very wide at all. 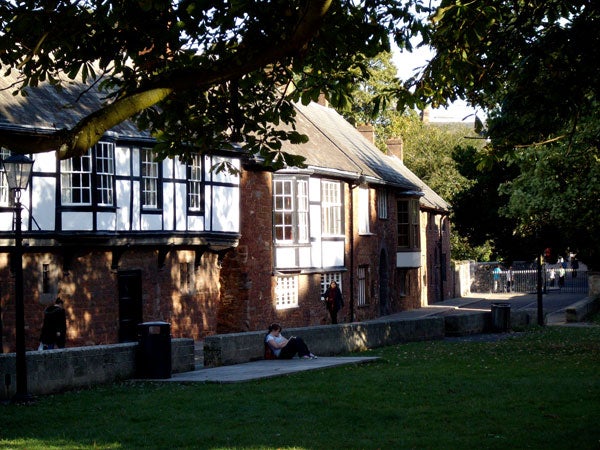 The telephoto end of the zoom range is equivalent to 112.5mm, but at least the dynamic range is pretty good. 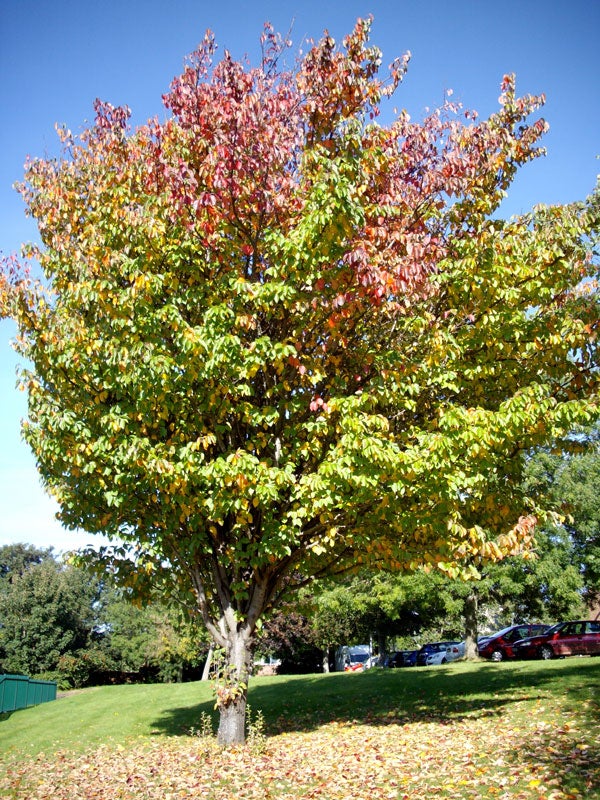 Colour rendition is very good, but the corners of the frame are a bit dark. 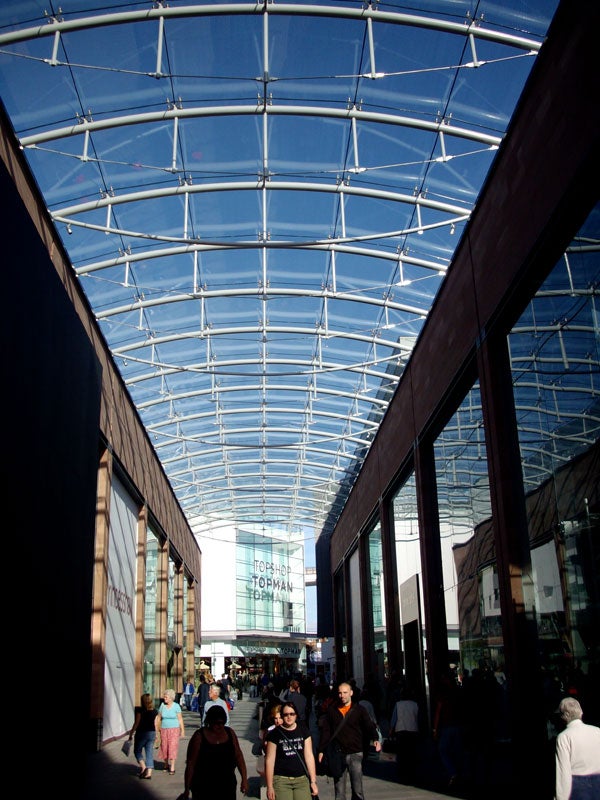 Contrast and dynamic range are also good, with both shadow and highlight detail in this high-contrast shot.