Hands-on: Pentax finally adds a full-frame DSLR to its range

Yes, it’s true. The new Pentax K-1 is the first time Pentax has ever made a 35mm full-frame digital camera. That’s amazing considering Canon and Nikon have been at it for years, but also explains why Pentax has lagged behind for so long. Where did loyal Pentax fans go when upgrading to full-frame… not Pentax. Enter the K-1.

5 things you need to know about the Pentax K-1

That’s about the same as the first-gen Nikon D810 and the D750, but the K-1 has better specs and features than either. Moreover, that’s the price now. It’s bound to come down in future, which will only make it better value still. The D810, for example, cost £2,700 when it first launched in 2014.

2) There’s already a healthy choice of lenses – DSLRs are only as good as their lenses, so it’s an important point. Pentax says it already has 12 full-frame compatible lenses on the market, with two more coming in time for the launch of the K-1 in April. Moreover, the K-1 works with any K-mount Pentax lens from the past, though older ones will only support manual focus. 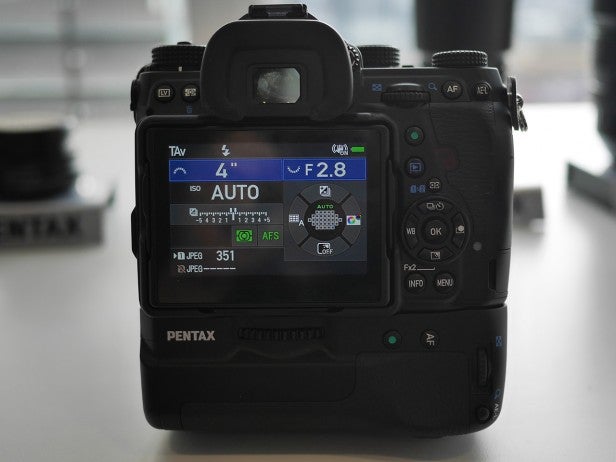 3) It has a weird ‘Flextilt’ screen – This is interesting, but possibly not in a good way. Instead of a hinge, the 3.2-inch screen pops out and tilts on what I can only describe as stilts. Pentax says they’re very strong, so strong you can lift the camera from the screen. That’s great, but this design doesn’t afford as much flexibility as a regular hinge design.

4) No AA filter (but it can be simulated) – Removing anti-aliasing filters (AA) is de rigour these days as it leads to sharper shots, so it’s no surprise the K-1 doesn’t have one. But Pentax says the K-1 can simulate an AA filter by “applying microscopic vibrations at the sub-pixel level”. This creates the same moiré reduction as an optical AA filter would, or at least that’s the idea.

5) There are loads of things you’ll like – Pentax ticks loads of boxes with the K-1. You get a 100% field of view from the pentaprism optical viewfinder, 4K video capture, lightweight magnesium alloy body, weather sealing, Wi-Fi and GPS. There’s even a handy mode, called Astro Tracer, that combines GPS data and the in-body stabilisation to make it easier to photograph night skies by compensating for the earth’s rotation. Clever.

Pentax K-1 release date and price: When I can buy the Pentax K-1?

The Pentax K-1 will go on sale in the UK in mid-April with prices starting at £1,599 body-only. 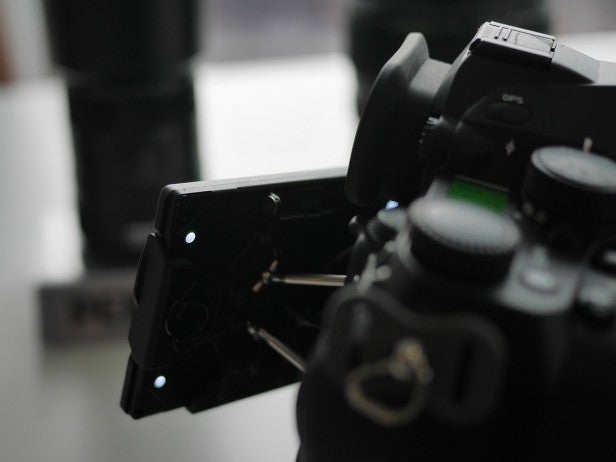 LED lights on the back of the screen light up the controls at night. It’s a neat idea if you photograph at night often. 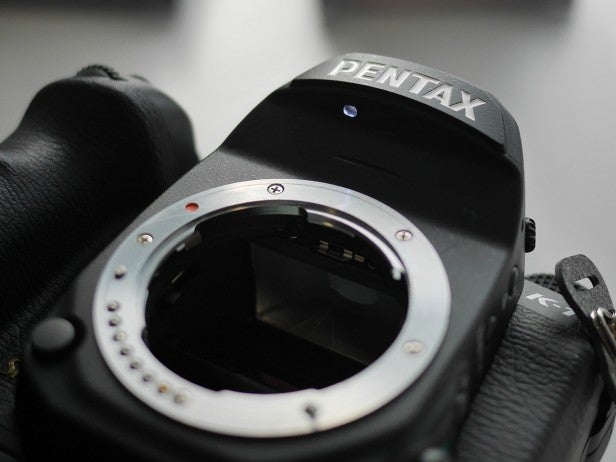 There’s another LED to make it easier to attach lenses in the dark, too. 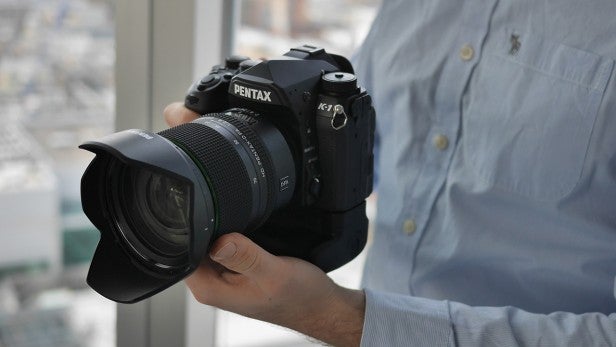 There’s a good range of accessories, including a battery grip with extra controls. 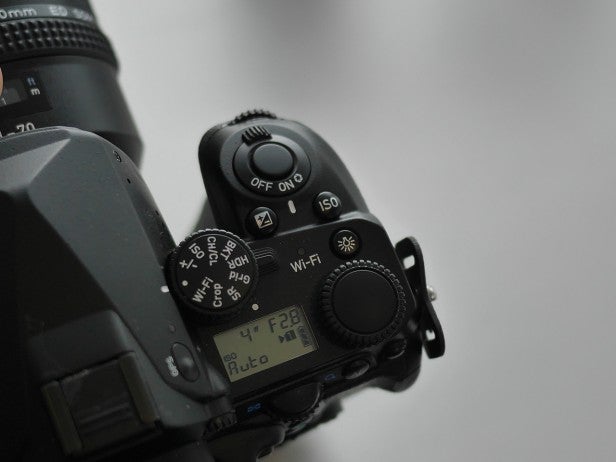 There’s a dedicated dial for switching on Wi-Fi and other modes, such as HDR. You can also switch between exposure compensation and ISO control on the top-mounted dial using this mode selector. 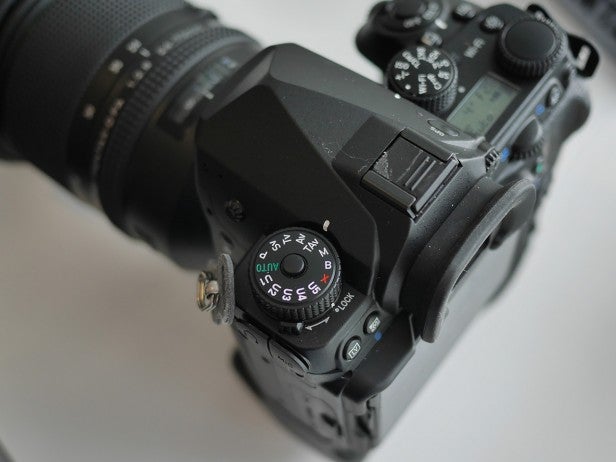 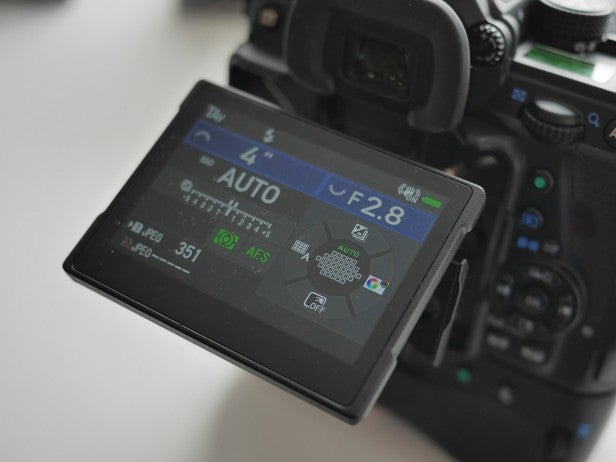 The Flextilt screen can rotate 90-degrees upwards, but it’s not as flexible in other directions. It seems like a good idea, but I’m not sure it works well in practice. We’ll see. 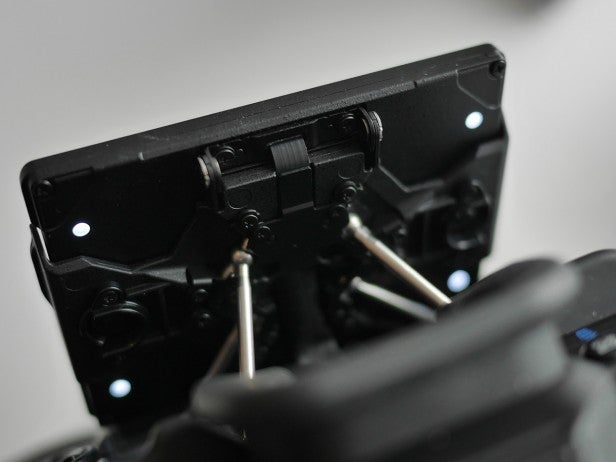 A better view of the screen mechanism. These metal stilts are strong enough to hold the camera’s weight, though I wouldn’t make a habit of holding the K-1 like that. 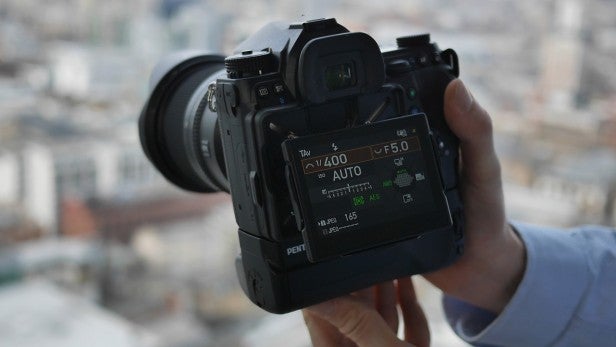 The K-1 weighs 925g body-only and just over a kilo with battery and card. Pentax quotes 760 shots from a full charge. It didn’t supply a figure with the battery grip included, but ‘lots more’ ought to be the answer.

The K-1 is great news for loyal Pentax owners. You finally have something to upgrade to if you fancy going the full-frame route – and why the hell wouldn’t you? It’s also a superb value alternative to the big guns from Canon and Nikon, and I suppose Sony if you’re including its range of full-frame mirrorless cameras.

There’s a larger question if this is too late to pull Pentax back into the fold, as it were. But for now it’s enough to say that on paper, and on first impression, the K-1 is an impressive effort. Hopefully it will live up to its billing when it goes on sale in April.