Software is a big part of any device. If it’s bad, you’ll try to use it as infrequently as possible. It needs to be intuitive, quick and accessible. One of our main complaints about the Apple Watch is how it feels like you need to spend too much time flicking the screen or spinning the Digital Crown to actually get anything done. 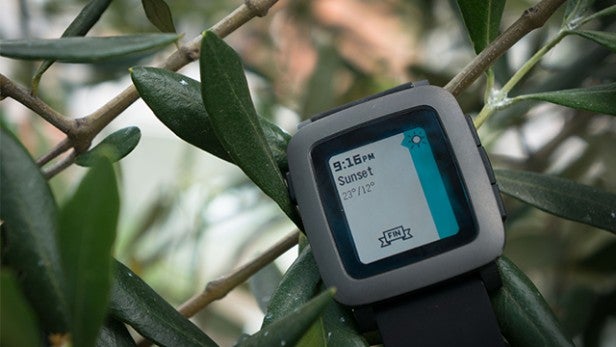 Pebble clearly feels the same as we do, because the Timeline operating system that powers the Time has simplicity at its heart.

The clockface is the starting point – an always-on view of the time. Scroll down and you jump into a sort of calendar view, although it’s more like Calendar 2.0. Instead of just showing upcoming appointments, it combines this with alerts from apps, weather updates and so on.

We downloaded Trip Advisor and ESPN, and once they were installed they started filling up our timeline with fairly useful information. Trip Advisor assumed we’d eat lunch at 12pm on the dot each day, and let us search for somewhere to eat straight from the timeline. With ESPN we were able to add sports fixtures – annoyingly it currently only supports US sports – to our timeline, clicking on them for further information and scores.

The idea is great and it makes sense on a wearable – clearly Apple agrees, as it’s building in a similar feature into Apple’s watchOS 2. You don’t want to be jumping in and out of apps to see when your favourite football team’s playing next; you just want it there when it’s relevant. It doesn’t work quite so well as the Google Now cards on Android Wear, mainly because it doesn’t seem like the content can be dictated by your location. Don’t expect to walk up to a restaurant and for Trip Advisor to spring into action and say whether or not you should go in. 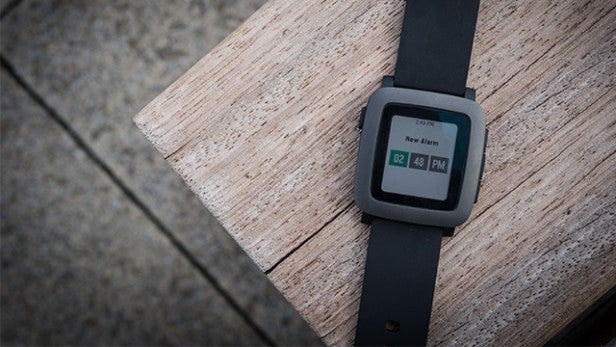 There are a couple of other shortcomings, too. We’re not overly convinced by the cartoon-style animations and icons, which just feel a bit childish. The sun smiles when the weather’s going to be good, for instance.

You’ve also got the typical problem of not having all that much app support out of the gate. Aside from the apps we’ve already mentioned, there aren’t that many Timeline-compatible apps. You’ve got Swarm, a smattering of other sports apps, a handy television show tracker, plus a couple of travel apps. We’re sure the selection will grow – we hope so anyway, because without app support the whole idea of Timeline just won’t work.

Pebble’s big play is that it’s one of the only smartwatches that will work whether you’re using a Samsung Galaxy S6 or an iPhone 6, yet the experience is far from equal.

Yes, this is down to iOS restrictions and it’s not really the fault of Pebble, but using the Time on an iPhone seems a severely hamstrung experience. First off, when a notification pops up you can only glance at it and then dismiss it. No replying and deleting. On Android you can see the notification and then act upon it – firing off a quick response either from a selection of canned replies or with your voice through the microphone. It’s a shame, and it limits the usefulness of pairing a Pebble with an iPhone. 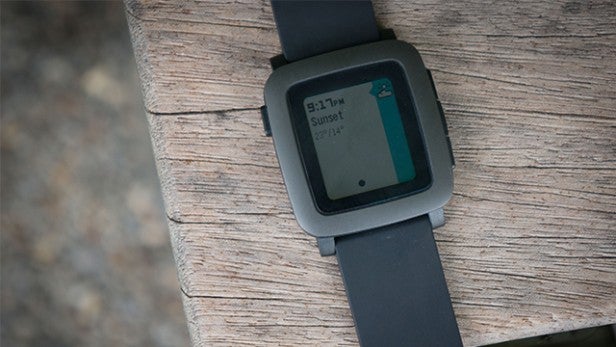 Talking about the performance of a watch seems a little odd, but it has to be said that we’ve come across quite a few wearable devices in the past that are harmed by sluggish interfaces and apps that take forever to load. The Pebble Time, though, doesn’t suffer with any these.

Thanks to the fairly light operating system, jumping through the menus and opening up apps is actually very fluid. There are some animations that could be shortened, but that’s not really the fault of the Time’s internals.

During its record-breaking Kickstarter campaign, Pebble won a lot of plaudits by highlighting the dismal battery life that has so far plagued smartwatches. Instead of the watch being something we never needed to worry about charging, we’re now plugging them in, alongside our phones, every night.

Even though we haven’t been able to make it to the claimed seven days of battery life, we have easily gone five without having to reach for the magnetic proprietary charger that pops onto the back with a satisfying click. Maybe if you get fewer notifications, keep the screen brightness at a low and barely ever turn on the backlight, you might stretch it a couple of days longer.

A working week of battery life gets a thumbs-up from us, though, and moving back to a wearable that requires a daily juicing is even more of an annoyance now. 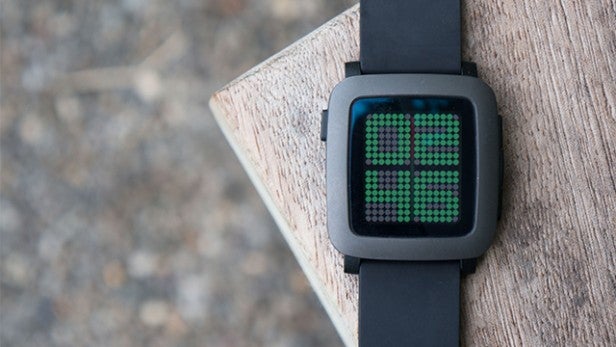 Should I buy the Pebble Time?

When we first heard about the Pebble Time we were excited. This anticipation only grew when we got our hands on the then elusive watch for the first time at MWC 2015. Yet, now we’ve been using the wearable for a while, all we feel is a slight hint of disappointment.

There’s not actually a lot to dislike about the Pebble Time. It’s nicer to look at than its predecessor, has an improved screen, it’s waterproof up to 30 metres and there are parts of the Timeline operating system that give us hope for the future. It also trumps the Apple Watch and every Android Wear watch for battery life with at least fives days of juice from a single charge.

But we just don’t have any desire to keep wearing it. There isn’t really anything here that we haven’t seen before. It’s great if all you want on your wrist is a constant stream of notifications and a clock, but it seems that the idea of a smartwatch has moved past that now.

We love the idea of the Pebble Time, it’s just a shame the execution isn’t good enough. Right now, it’s just not worth the money. Hopefully things will get better once the Pebble app selection improves and we get our first Smart Straps.

If you want a smartwatch that does a lot more in some areas, but lacks the killer battery and waterproofing features, there are plenty of Android Wear options about. But, if you want something that runs a more advanced operating system than what Pebble has to offer, plus all those extras, then maybe there isn’t a smartwatch on the market for you. Yet.

The Pebble Time features some great ideas, but it lacks the polish and execution to make it a deserving addition to your wrist.