When the Pebble first launched there was something of a disparity in functionality between Android and iOS. Thankfully this has largely been resolved so you get much the same experience regardless of which mobile OS you happen to be using. This is a big plus point for the Pebble range, as other leading smartwatches – such as Sony’s Smartwatch 2 and Samsung’s Gear Live – only work on Android. By catering for users of both systems, Pebble could score big over its rivals.

The number of apps currently available is quite modest when compared to Google Play or the iOS App Store, but this is to be expected – this is a more focused product, and most of the downloads tend to involve notification enhancements to support apps which aren’t currently “baked into” the core Pebble OS. We also noticed several fitness apps – from the likes of Jawbone and Misfit – which turn the device into a robust exercise tracker at no extra cost.

If you’ve been a Pebble user since the initial launch in 2013 then you’ll know that the standard of the apps is improving all the time. One of our favourites is Pebble Locker, which is installed to your phone and pairs with your Pebble, using it as a wireless security device for you handset. When your phone senses the Pebble is connected, it disables the screen lock so you don’t need to input your password every single time you pick it up (assuming you’re sensible enough to have one in the first place, of course). If your phone is lost, stolen or simply not in the vicinity, the Bluetooth connection between watch and handset is severed and the lock is reinstated, protecting your precious personal data. 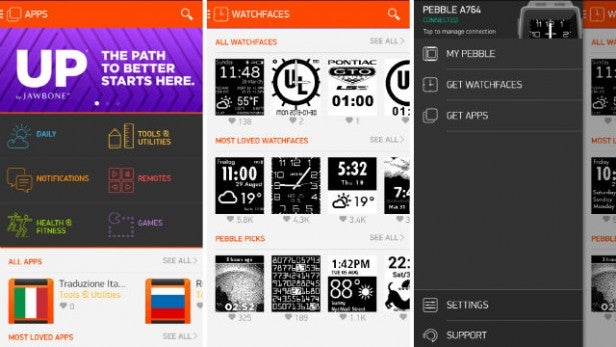 Like pretty much every smartwatch available right now, the Pebble Steel doesn’t really have much of a mind of its own; instead, it is used to channel notifications from your handset. When not connected to your Android or iOS device via Bluetooth, it’s little more than a normal watch. However, once a link is made the Steel will display your emails and text, remind you of calendar appointments and even track your activity so you can see how many steps you’ve taken in a single day.

While much of this functionality is built-in out of the box, there’s a well-stocked application store which contains new programs to download as well as new watch face designs. This store is only viewable on your phone using the dedicated Pebble application (this also handles the connection to the watch itself), and once you’ve made a selection it takes a few seconds to install the selected app or watch face to your wrist.

One of the most useful features we found is the ability to control your phone’s music player using the buttons, saving you the bother of having to extract your handset from your pocket every time you want to skip a track. We also found a great application which works with Google Navigation – the watch picks up on new directions and beams them directly to your wrist, which is very handy if you’re on-foot and struggling to find your way around an unfamiliar city. 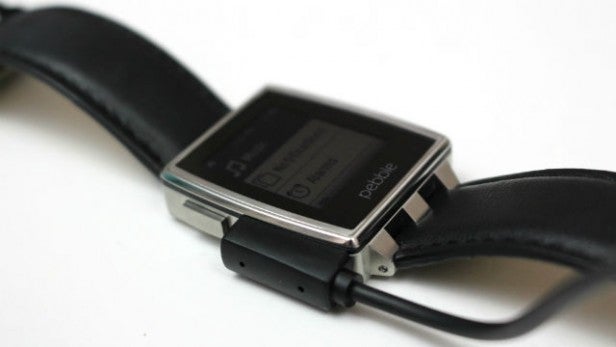 What is really striking about the Pebble Steel is how simple and straightforward it is. Once connected all important notifications are sent to the watch, which discreetly vibrates for each alert. We found that it was much easier to simply check the watch to digest incoming messages than it was to pull our phone out and unlock the screen. It’s even possible to see who is calling you and reject it, all from the Pebble Steel.

There’s another benefit here – because you’re activating your phone’s screen less, you’ll find that its battery lasts longer than usual. With displays of over 5 inches now the norm, a handset’s stamina is drastically impacted by the demands of its screen, and the less it’s active during a single day the more time you’re going to get in-between recharges.

The Bluetooth link between watch and phone is strong, and we didn’t notice any accidental disconnects during our review period. The distance is also impressive – there were times when we left our phone in another room and notifications still made it through to the Pebble Steel. When a disconnection does occur due to the phone and watch being parted, the device automatically re-links as soon as it’s within range again.