Pebble has just confirmed that it has been acquired by Fitbit and will cease making its own hardware. Other recent Kickstarter devices launched alongside the Pebble 2, including the Pebble Time 2 and Pebble Core, have now been cancelled and backers are receiving refunds.

What does the acquisition mean for existing Pebble 2 smartwatches that have already been delivered or are currently on sale? Pebble has stated: “functionality or service quality may be reduced down the road”. What this means exactly we can’t be sure at this point, but this is worth keeping in mind if you do decide to pick up a Pebble 2.

Our original review of the Pebble 2 continues below.

What is the Pebble 2?

The original Pebble was the darling of crowdfunding platform Kickstarter, and helped springboard a whole new market for ‘smartwatches’.

While most smartwatches today are known for their colour touchscreens, and accompanying awful battery life, the Pebble made do with a low-power e-paper monochrome LCD display that meant it could for days on a single charge and importantly, didn’t break the bank where it came to its price.

For the follow-up, the Pebble 2, the company hasn’t deviated far from the blueprint it laid way back in 2012, aside from adding a heart rate monitor – which is both a good thing and a bad thing.

The original Pebble was a decidedly plasticky affair, which in part was understandable considering its low cost compared to its fancier rivals. Where the design trend elsewhere has gravitated towards smartwatches that masquerade as traditional timepieces, the Pebble watches have remained an unmistakable item of technology.

Not much has really changed for the Pebble 2. There’s the same monochrome e-paper display that isn’t a massive drain on battery life, and the same four-button control system in place of a touchscreen. If you’ve used a Pebble watch before, it’s all very familiar, right down to the buttons needing a little bit of a break in time. Out of the box, the clicky side buttons are a little stiff to press. 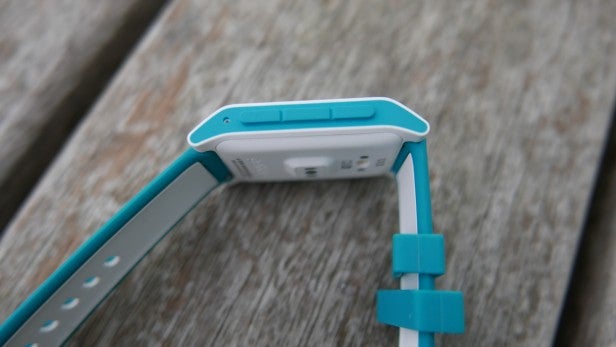 The display has been improved in the sense that it’s now coated in Corning Gorilla Glass, which should add an extra layer of protection. The original Pebble was no weakling, though. I managed to smack mine around with impunity without much issue.

The 144 x 168 resolution screen is surrounded by a thick, rather garish, bezel, meaning the actual screen itself is pretty small relative to the size of the watch. It does the industrial design no favours. 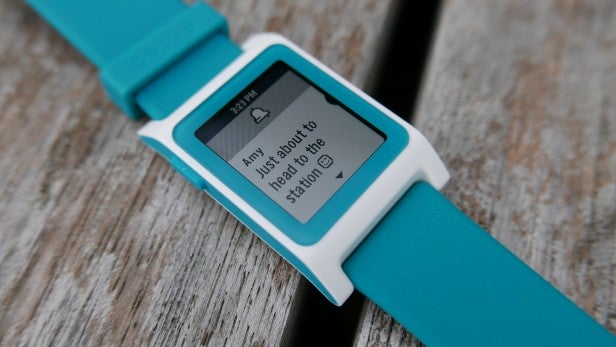 The one good thing about e-paper is its viewability in bright outdoor conditions. I never had any problems being able to see the screen due to glare or reflections on the display. There’s a backlight for use in low-light conditions, too.

There are new colours for you to choose from, ranging from understated to the more outlandish. There’s standard black and white models, alongside a charcoal and red, charcoal and lime, and finally aqua and white, which was the model I was sent to test.

The ‘aqua’ part seemed apt, because a colleague described my review model as looking like a tube of Aquafresh toothpaste. It’s certainly my least favourite of the colour options in any case. It looks very toy-like, almost as though Fisher Price made a ‘My First Smartwatch’. The aqua and white pairing is the only model without a black bezel around the screen instead using an aqua bezel that matches the strap. 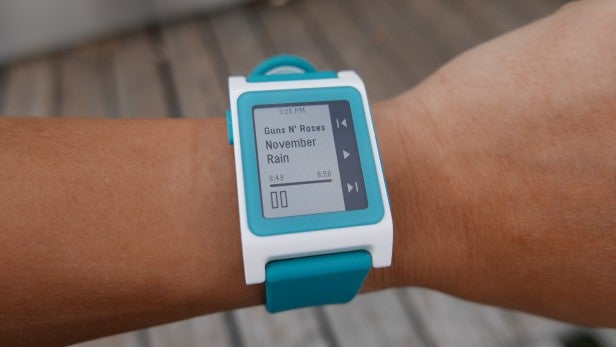 A special mention should go to the standard silicone strap that’s included, though. It’s super, super soft and supple to the touch. It’s by far the nicest-feeling silicone strap I’ve ever worn. There’s a little bit of elasticity to it, too, so it’s incredibly comfortable against your wrist, even when you wear it tightly for better HRM performance. It’s a big upgrade over the original Pebble’s.

The Pebble 2 is waterproof to 30m, so you’re free to swim and shower with it without worry. The silicone strap does well in water as you’d expect.

Flip the watch over and you’ll find the new optical HRM that is at the heart of the Pebble 2’s appeal. Having said that, there’s a cheaper ‘Pebble 2 SE’ (£80) model, which does away with the HRM but only comes in black. The charging point has also been moved from the side to the rear.

The underlying Pebble operating system that’s powering the watch’s functionality has been refined over the year with each subsequent watch, such as the Pebble Time. As such, many of the refinements have made their way to the Pebble 2.

The Timeline feature, for example, lets you take a chronological view of your day, pulling in calendar information and alerts from apps; think weather updates or sports scores and the like. It’s simple but works well, letting you get a quick snapshot of your day and relevant information. This is accessible by hitting the down button while on the main watchface. 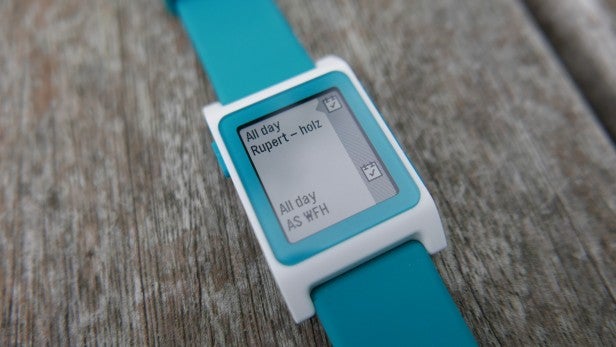 Pebble Health, which is accessible by navigating up, pulls in all of the activity tracking information. The Pebble 2 is able to monitor your steps taken, sleep duration and your heart rate. I’ll cover more on the health and fitness aspects in a separate section.

On the more conventional smartwatch side, you have the usual music playback controls and notifications you would expect. You can configure what notifications are mirrored to the watch through the companion app on your smartphone, or mute them directly from the watch.

You can also reply to messages directly from the watch, either with pre-canned messages you define in the app, or by selecting emojis. New with the Pebble 2, thanks to a small microphone along its right edge like the Pebble Time, is the ability to reply to messages using your voice bringing a little more parity with other smartwatches now on the market. It works well enough and managed to transcribe my voice messages well, although the action of speaking into your watch remains as awkward as ever. 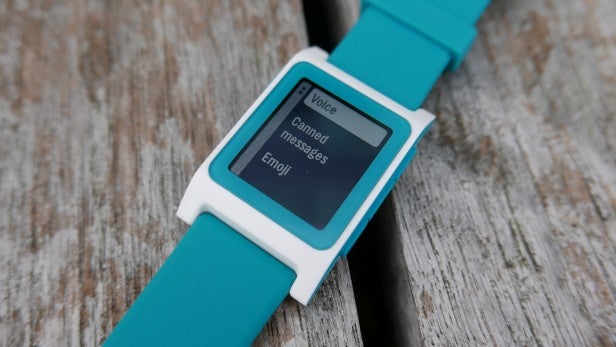 Part of the fun of Pebble watches is the customisation, and as before there’s a whole raft of watchfaces to choose from. The catalogue is a bit of a mixed bag, though, and l suspect once you find one you like you won’t change it that often.


The Pebble app catalogue doesn’t really rival that of the Apple Watch or Android Wear smartwatches, even though the Pebble ecosystem has been around the longest. There are some useful inclusions, such as Uber, and a few home automation apps that are useful to control from your wrist – I like being able to turn on my Lifx smart lightbulb – but the list of apps you’ll want to install is far from exhaustive. Some companion apps, such as Strava, require you to install a standard app on your smartphone, which you can then control from the Pebble 2.