The Octane is supplied with a removable 82Wh battery. That’s an entirely normal power pack for a conventional gaming notebook specification, so it’s no surprise that this machine’s longevity was predictable.

PC Specialist’s machine lasted for three hours and fourteen minutes in the PCMark standard battery test with the screen at 40% brightness. That’s exactly what I expect from a gaming notebook, and it falls between the competition. MSI’s machine was about half an hour worse, but Alienware’s machine confounded expectations with a five hour lifespan.

That result means that the Octane won’t last long away from the plug with the screen at full brightness and games at full pelt – expect about an hour before low battery warnings start to appear. This machine will handle a bit of gaming on the daily commute, but nothing more.

The Octane deploys Nvidia’s best single-core mobile graphics chip, and it blitzed the games tests without breaking a sweat. With every graphics option in Bioshock Infinite turned up it still averaged a smooth 79fps, and it then rattled through Battlefield 4’s Ultra settings at 67fps. Crysis 3 is the toughest test title, but it still averaged a mighty 64fps. There’s enough power here to play games at 1080p – and to output to 1440p panels using the machine’s DisplayPort or HDMI connectors.

That’s a fair way ahead of its GTX 970M-powered rivals. The MSI GS60 6QE Ghost Pro’s Bioshock and Battlefield 4 scores of 61fps and 52fps are reasonable but a long way back, and the Alienware 15 could only manage 71fps in Bioshock. 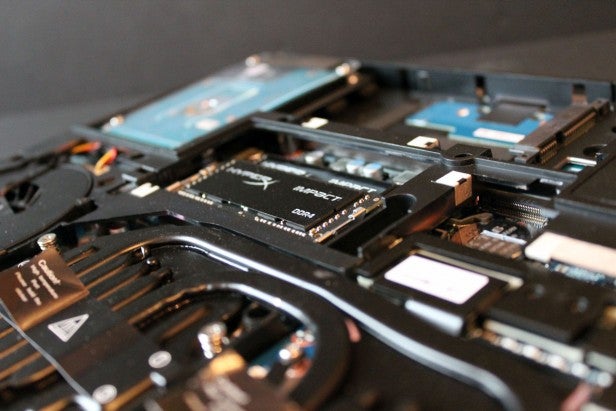 The clear air between the Octane and its rivals is illustrated by 3D Mark Fire Strike. PC Specialist’s machine scored 8,586 points. That’s at least 2,000 points ahead of the competition.

The Octane’s desktop processor rattled through Geekbench 3 to a score of 15,932. That is excellent: a couple of thousand points beyond the i7-6700HQ in the MSI. It also scored 806cb in Cinebench R15 – better than the MSI’s 639cb. It’s clearly a capable chip that won’t balk at any intensive work software or the latest games.

The SSD is fast, too. Its sequential read and write speeds of 1,836MB/s and 1,265MB/s are stoking – a little ahead of the MSI and miles ahead of the SATA drive inside the Alienware. The Samsung drive is about as quick as it gets right now, which means optimal loading times.

With the processor and graphics core individually stress-tested they peaked at modest temperatures of 72 and 68 degrees, and with both components tested simultaneously those results rose to 83 and 75 degrees. They’re good results that didn’t cause the key chips to throttle, and the cooling system also ensured that hot air was ejected from the rear of the machine. That’s good, because it means there’s no danger of gamers’ laps being unduly warmed by toasty internals.

The modest temperatures were accompanied by reasonable noise. There’s a noticeable whirr from this machine – as I expect from any gaming portable – but it’s quieter than both of its rivals. That’s important if the user is relying on speakers rather than a headset. 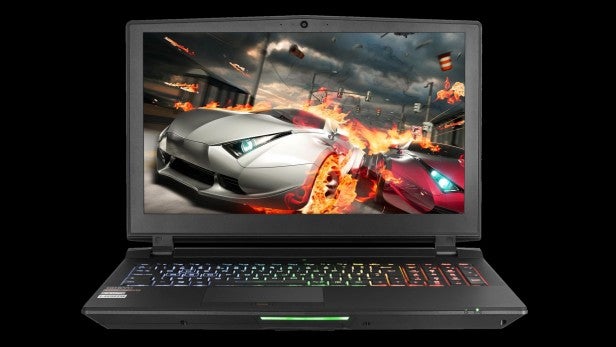 Should I Buy the PC Specialist Octane?

This is an unashamedly old-school gaming laptop. It’s packed with fast hardware that’s got the power to scythe through the latest games, and its 1080p screen offers high enough quality levels that the latest titles look great while running smoothly.

It’s good ergonomically, with a fine keyboard and trackpad. It’s got internal access, plenty of ports, and solid speakers.

The Octane’s retro style does mean that this system suffers in some areas. It’s far thicker and heavier than its rivals, and its battery life is underwhelming.

PC Specialist’s Octane makes no major mistakes, but that size could be an issue for anyone who wants a lighter system to carry around – and it’s also a little pricier than the competition. If power is more important than portability, though, this is excellent.

The PC Specialist Octane is an old-school gaming laptop that crams hugely powerful hardware inside a thick, heavy chassis.