What is the PC Specialist Octane?

This laptop comes from a firm that’s better-known for its gaming desktops. PC Specialist is based in Wakefield and has been building high-end systems since 2003, but the Octane is the first time I’ve gone hands-on with one of its notebooks.

The £1,549 machine comes with a desktop processor and high-end graphics chip, which certainly bodes well for impressive framerates.

It may be first time I’ve reviewed a PC Specialist laptop, but there’s something familiar about the Octane. That’s because this machine is built using a shell from Taiwanese notebook firm Clevo. The model used here is the P751DM – the 15.6-inch version of the 17.3-inch base used by the XMG U706.

That’s no knock on PC Specialist, though; Clevo’s hardware is hard-wearing and packed with features. It has loads of USB 3 ports, a USB 3.1 Type-C connector, an eSATA socket and four audio jacks, and the chunky power plug on the rear is sandwiched between an HDMI socket and two DisplayPort connectors. 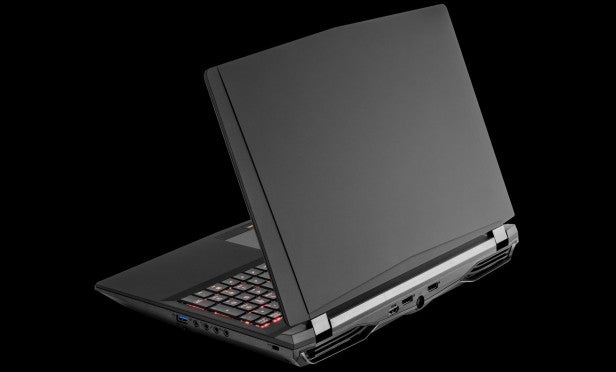 The versatility extends to the interior. Two base panels peel away to reveal the components: the first grants access to the memory, M.2 SSD and cooling gear, and the latter hides the hard disk and spare 2.5in and M.2 connectors. That’s about as good as it gets for gaming notebooks – it means the components are accessible and that it’s easy to clean the cooling gear.

The Octane is a sturdy lump of a laptop. There’s a tiny bit of give in the wrist-rest and the underside, but the minor flex in those panels isn’t enough to make me worry about lugging the Octane to LAN parties or friends’ houses. The screen is similar: it does move, but the desktop itself isn’t distorted. It’s a similar bill of health to the MSI GS60 6QE Ghost Pro, and it’s not far behind the rock-solid Alienware 15.

I have no qualms about taking the Octane out and about, but I’d invest in a decent backpack to protect my shoulders. PC Specialist’s system weighs 3.4kg and is 36mm thick: miles bigger than the MSI, and a little heavier and thicker than the beefy Alienware.

The Octane isn’t the slickest-looking laptop. There isn’t a logo anywhere on its matte black lid, and the same understated material is used to surround the keyboard and the screen. There are ridges and seams around the screen and the base, and no illumination around the touchpad. The power button is lit with a green LED, the keyboard is backed with blue lights, and there’s a raft of stickers along the left-hand edge.

If you want an understated notebook that’ll surprise with its power, this is ideal.

The Octane isn’t the first gaming laptop to mix desktop and notebook components – XMG’s Clevo-made U706 did the same thing.

PC Specialist’s machine is powered by the Core i7-6700. It’s the most modest chip from Intel’s desktop Skylake i7: its four Hyper-Threaded cores run at 3.4GHz with a Turbo Boost peak of 4GHz, and the chip has 8MB of L3 cache and a 65W power requirement.

The Octane grabs attention by locking and loading a desktop chip, but there’s not much between the basic i7-6700 and the mobile i7-6700HQ that’s used in the MSI and the latest revisions of the Alienware 15. The i7-6700HQ runs at 2.6GHz with a Turbo peak of 3.5GHz, and it’s still got those four Hyper-Threaded cores. 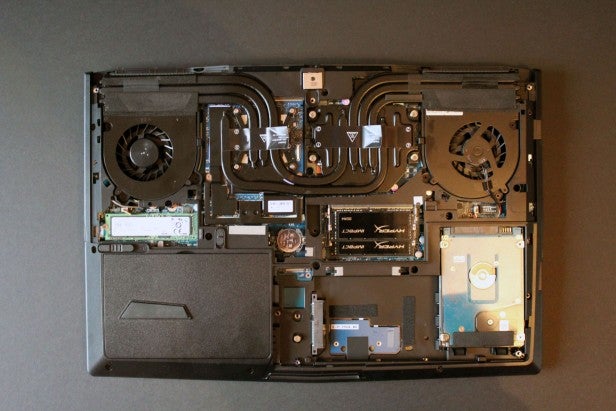 Elsewhere the Octane is more conventional. It’s got 16GB of DDR4 memory clocked to 2,133MHz. The boot drive is a 256GB Samsung SM951 M.2 SSD, and it’s alongside a 1TB Toshiba hard disk. That’s an entirely normal storage loadout for a high-end gaming notebook in 2016.

Graphical grunt comes from the GTX 980M. It’s the most popular Nvidia mobile chip right now – no surprise, since it’s top-of-the-range silicon. The chip has 1,536 stream processors and a 1,038MHz base clock, and PC Specialist has opted for the full-fat version of the chip with 8GB of dedicated GDDR5 memory. It’s a step up from both rivals – they used the GTX 970M.

There’s another area where the PC Specialist eases ahead of the competition: specification options. Every part of this machine can be altered. The screen can be switched for a 2,880 x 1,620 panel or even a 4K variant, and processor options range from the cheaper i5-6400 to the high-end i7-6700K. Memory choices run from 4GB to 32GB, and the graphics core can be switched down to the GTX 970M.

There are dozens of storage options for multiple SSDs and hard disks, and the Octane can also be augmented by sound cards, 4G cards, spare batteries and different networking options.

It’s almost infinitely customisable. The cheapest manageable model – I’ve opted for a 500GB hard disk and 8GB of memory with Core i5 and GTX 970M silicon – costs £1,168. Ramp the components up to stratospheric levels, meanwhile, and the price soars beyond £2,000.

The Octane also comes with a more generous warranty than its rivals. PC Specialist’s default deal is a three-year labour deal that includes a year of parts coverage, and two more comprehensive levels of coverage are available. The Alienware has a single year of next-business-day protection. The MSI also has a one-year deal.

The most disappointing part of the Octane’s feature set is its lack of software – the only third-party tool installed here is Bulldog Security, which did nothing but serve up intrusive pop-ups. The MSI and Alienware machines both have apps for LED customisation, fan modes, audio tools and network optimisation. I tend to find these apps mixed, but at least other laptops give the user those options.