What is the PC Specialist Ignis?

Small-form-factor PCs aren’t unusual, but the PC Specialist Ignis goes beyond what I normally see from such diminutive desktops. Its case is built by bespoke builder Parvum, and is made entirely from acrylic.

That’s enough to draw the eye, but there’s plenty on the inside too that proves attractive. At the heart of this PC sits high-end, current-generation silicon from Intel and Nvidia, plus an SSD that’s nearly 1TB in size.

The Parvum Veer 1.0 chassis is built from layers of plastic. Most of them are black, with a burst of colour coming courtesy of an occasional layer of opaque red – a smart touch that looks even better when those colour panels glow as they catch the sun.

The layered acrylic, sharp corners and two-tone colours ensure that the Veer 1.0 looks different from every other case on the market. And this individuality is enhanced further by slick touches throughout. The front panel is decorated with a pin-sharp Parvum logo; indents in the front panel reveal more red; and a huge window on one side of the case provides a view of the components.

And that view is a good one. The motherboard sits on a raised section that hides the PSU and its cables, and the graphics card and large water-cooling unit sit in parallel above the mini-ITX board. It’s tidy, which enhances the look of the interior further. 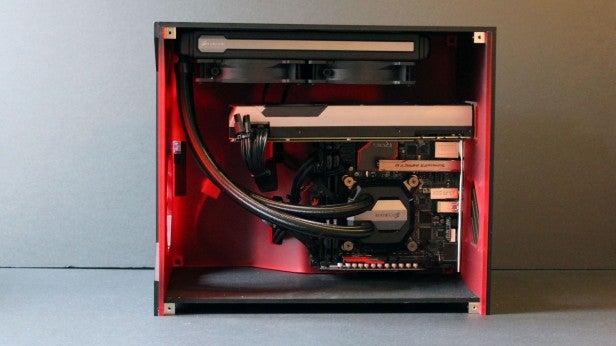 The PC Specialist stands apart from its two keenest rivals. The Alienware X51 is an exercise in excess: tall, narrow, covered in lights and made from plastic. The Chillblast Fusion Fury Nano is smaller than the PC Specialist, and just as smart. It’s made from brushed red aluminium and also has a side window.

The Ignis’ Parvum chassis looks fantastic – bold, smart and unique – but it has a few downsides. The first is build quality, which is unlike more traditional cases. Pick up the PC Specialist and the acrylic immediately begins to squeak where panels rub together. Some of the panels flex, too; the plastic beneath the PSU bends to accommodate cables, for instance.

The PC Specialist doesn’t feel weak or flimsy, but there’s no denying that the two rival machine’s are sturdier and will do a better job of standing up to the rigours of regular use.

In addition, the Parvum lacks any decent room to grow, with only one extra 2.5in slot included. While this isn’t unusual in small PCs – both rivals offer similar spaces – it’s a little surprising given the Parvum’s size and the amount of space inside that lies fallow. The Ignis is 267mm wide and 357mm deep, while the Chillblast is only 190mm wide and 254mm deep; the Alienware is just 95mm wide.

Connectivity is good. The back panel serves up dual-band 802.11ac wireless and Gigabit Ethernet with prioritised gaming traffic, and there’s Bluetooth 4.0. The rear has four USB 3 ports, USB 3.1 Type-A and -C connectors and three audio jacks, and the front has two more USB 3 connectors.

The key gaming part is Nvidia’s GeForce GTX 980 graphics card – one of the firm’s most powerful chips. It isn’t overclocked, but it has 2,048 stream processors and a stock speed of 1,126MHz that can use GPU Boost to reach 1,266MHz.

The GTX 980 will easily outpace the Alienware’s GTX 960 core, but it could have a tougher time against the AMD Radeon R9 Fury Nano inside Chillblast’s machine.

The processor is a current-generation Core i5-6600K part that runs at a stock speed of 3.5GHz and reaches a single-core Turbo speed of 3.9GHz. That’s good on paper, and it means that the Ignis won’t balk at any home or gaming tasks.

However, it could struggle when pitted against rivals. Both the Alienware and Chillblast include the 4GHz Core i7-6700K, and the latter machine ran that chip at an overclocked 4.6GHz. That processor also has Hyper-Threading. 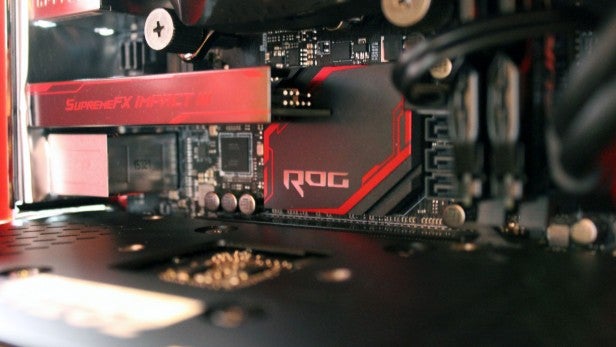 Elsewhere, there’s 16GB of memory and a 960GB SSD. The latter is as large as many hard disks, and with far more speed. It’s also a little unusual for a PC to arrive with a single large SSD – the Chillblast is more conventional with its smaller SSD and larger hard disk.

The Asus Maximus VIII Impact is one of the industry’s best mini-ITX motherboards. It crams in the features: it accepts up to 32GB of DDR4 memory, and the back panel has power and reset buttons alongside a two-figure POST display.

It’s a good-looking slab of PCB, but the mini-ITX form factor does prove limiting. There are only two memory slots, both of which are occupied, and the single PCI Express socket already houses the graphics card. There are spare SATA connectors, but the lack of upgrade room in the case puts paid to any use for those.