Form or functionality? It was once argued the two cannot co-exist. The high sheen of the polish on Apple 4K TV attempts to blind users from its limited feature set. Conversely the breakthrough of WDTV‘s advanced functionality came at the cost of a basic UI and deep submenus. Happily in recent times the WDTV Live Hub and the D-Link Boxee Box have shown the two are not always a trade-off. So it is with some surprise we find Patriot’s PBO Core multimedia player trying to teach us an unwelcome history lesson.

This cautionary tale isn’t obvious at first sight. The PBO (Patriot Box Office) Core is the former memory specialist’s latest generation media player and on the surface it appears to get everything right. The compact (17.1cm x 16.8cm x 13.5cm) device is a box of tricks capable of fitting a 2.5in SATA HDD, connecting to a USB drive or network via Ethernet or WiFi. It also supports copying between storage sources and UPnP streaming from devices such as a PS3 or Xbox. Furthermore, like many media players today its format support is almost unlimited. 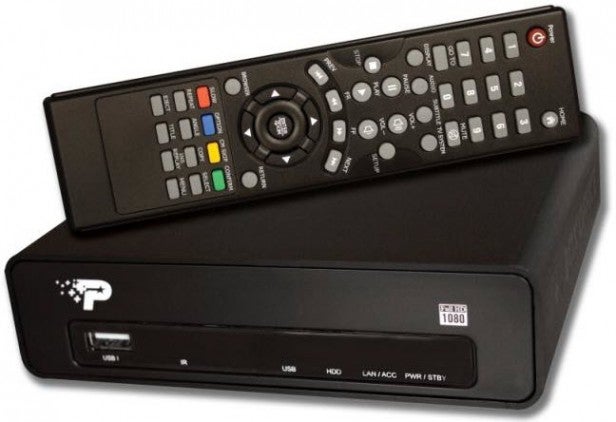 Vitally 1080p playback is supported and there is connectivity in the form of HDMI, composite RCA, 10/100 Ethernet and 3x USB 2.0. Furthermore switch the PBO Core on and it is virtually silent. This applies both to lightweight tasks like cycling through photos and when viewing Full HD content. Even the remote control is extensive, its large array of buttons look more like the full fat controller of an expensive TV than the cut down remotes typical of most media centres.

Performance is excellent too. The Core handled every video file we threw at it and even high bitrate 1080p proved no problem with no frames dropped. Music was equally adept with tagging and album art displayed (though obviously with reduced format support) and slideshows cycle with a number of simple, but visually pleasing transition effects.

Unfortunately the flaw in the Core is not what it can do, but the battle to get it to do it…

As mentioned at the start of this review it is possible to combine style and substance, but the PBO Core sacrifices almost all of the former in favour of the latter. This is most apparent in the heavily text based user interface which looks at least five years out of date. Even firmware must be updated via external USB. Where there are graphics they are of low quality and poor animation leaves the user confused as to what they are selecting. Worst still for a text heavy UI, it is presented in low resolution making text look blurry and amateurish. More tech savvy users may not be put off, but it certainly won’t appeal to the mainstream.

This is a shame because in addition to the Core’s excellent format support and powerful playback it comes with integrated RSS feeds, access to Picassa Web albums and local weather. Furthermore the granular nature of the UI means there are user options galore and those comfortable with tweaking advanced settings will find the Core more flexible than many of its rivals. 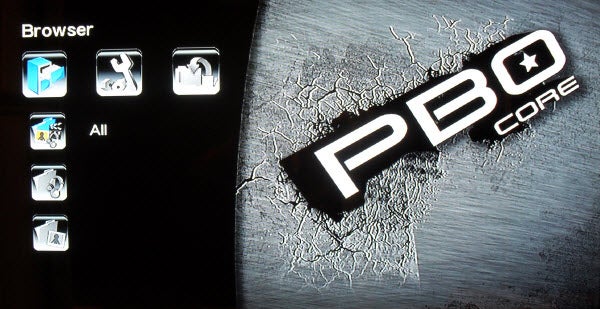 That said getting there in itself is a problem. What the Core UI lacks is the ability to play files quickly and easily. For example, files will resume from where they were left off, but if stopped each time they must be dug back out from the file system – there is no shortcut. Consequently if a media player can’t make content selection easier than using a PC, you may as well just buy a long HDMI cable and connect it directly to your desktop.

Compounding this is the remote control. It may have innumerable buttons, but the layout is unintuitive. For example the main central button is for zooming in and out of video (hardly a common task) while play/pause and fast forward are small and easily missed. Furthermore there is needless feature separation. In this day and age a progress bar should come up when pressing play, but here it requires a dedicated ‘display’ button which must be pressed again to make the information disappear. These niggles are small, but indicative of an outdated control system and they combine to make the overall experience far more effort than it should be. 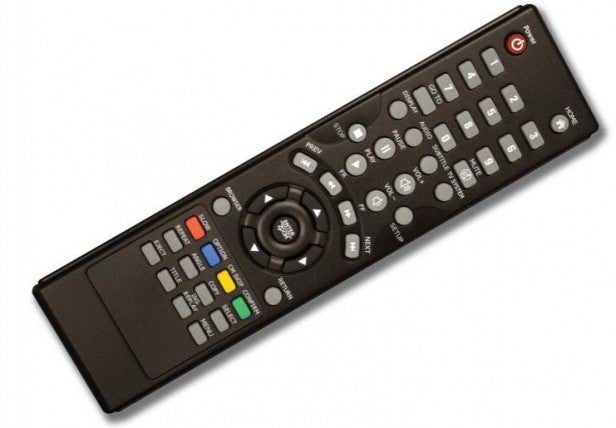 Adding to these problems are the Core’s only poor hardware decisions: that of 10/100 Ethernet and making WiFi an optional extra (the USB dongle is £13.99). The former doesn’t affect playback, but it means fast searching within files over a network, particularly with 720p and 1080p content, is virtually useless as video is reduced to a slideshow of stills that update every few seconds. Judging where you are accurately can be almost impossible. As for WiFi the dongle adds extra cost, but more significantly they have notoriously poor reception compared to integrated functionality. We were not supplied with a dongle, but HD playback typically struggles if not located in the same room as the source.

All of which means we ask a lot of the price. With a sub £75 RRP the Core makes it more expensive than Apple TV, but it targets a different audience. What saves it, however, is the £49.99 sale price for which it can currently be found on the Web. There is still additional outlay for those needing WiFi, but for under £50 the functionality becomes hard to ignore. Would we recommend the PBO Core? No, but if budget is a priority you’re getting a lot of device for your money.

”’Verdict”’
The antichrist of Apple’s product philosophy, the Patriot PBO Core multimedia player delivers bucket loads of functionality, but at the cost of a dated and unintuitive UI. Content playback is flawless, but searching through it is poor over LAN and the overcomplicated remote will take time to get accustomed. For the price the Core is something of a bargain, but we’d suggest stretching a little further for a more polished user experience.