Payday 2 originally launched all the way back in 2013. It wasn’t very good then and, in the five years since, this ugly duckling hasn’t exactly blossomed into a beautiful swan.

This is a bad game, made even worse by a poor migration to what is a glorious console that deserves better. Much like the Wii became awash with shovelware, I fear Payday 2 is an early example of the kind of half-arsed, poorly implemented ports that the Nintendo Switch’s success will invite.

Payday 2 on Switch includes all previously released content for the game. However, this won’t all be available immediately, with the latest patch currently not available for the game. There’s still a huge number of masks, guns, customisation options and heists available, so if you’re new to the experience then there’s a ton of content to dive into. 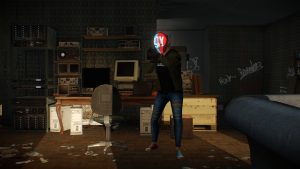 Following each mission, it was undoubtedly fun to count my cash and then become excited about all the cool masks and attachments I could spend it on for the next mission. I’m a sucker for collecting trinkets in games, and the fact that the Switch edition is generous with what it gives players to start makes it easier to want to unlock more.

However, this pales into insignificance when you consider how poor the game looks and performs on the console.

DOOM’s transition to Nintendo Switch was an absolute dream, and built hope that maybe the Switch will see parity with its console counterparts. Perhaps not in the visuals department, but the gameplay experience could very much match. The developer, id, made several brilliant decisions to make the demonic shooter feel at home when both played on the TV and on the go, as well as minimising the visual downgrade. Unfortunately, the same effort is lost in Payday 2.

For starters, the game is hideous-looking. Stripped-back visuals, to the point where it feels like you’re playing on a bare-minimum-spec PC, make Payday 2 appear like a Wii port rather than a game for the Switch. Grenades explode with laughable visual effect. I’ve experienced a bigger bang from a party popper. 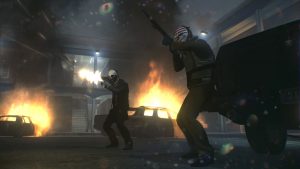 The shooting also feels deeply unsatisfying. Guns lack a significant punch, and the puny little red crosshair that appears whenever you hit an enemy doesn’t exactly add much impact, either. What’s worse is that the reticule looks the same when you both hit and kill officers, meaning you don’t know whether or not you’ve downed them for good unless you lower the gun –particularly worse when playing portable thanks to the smaller screen – and doing so can be costly in trickier heists.

Also, not much effort appears to have been made to understand the Switch as a console. Again, DOOM offered a suite of options to alter aim sensitivity for both portable and docked gaming. With the smaller real estate of the Switch’s screen, this was essential. This subtlety is lost in Payday, with aiming erratic when you’re on the go. Intricate movements can lead to wild motions, which hugely affect accuracy. You can alter the settings, but it doesn’t quite deliver for portable mode.

The game also just feels very slow to control. It’s almost like a first-person game with Resident Evil’s old-school tank controls. Characters are very slow to turn, movement feels like you’re forever carrying something heavy and the general feel of the characters is deeply unsatisfying.

Next we come to the fact this is a five-year-old game, meaning its sins have lingered for years. This makes the archaic experience feel even more infuriating. Playing the game pre-launch, I’ve been playing the offline modes, meaning I’ve had to endure the absolutely braindead AI, both for allies and enemies. 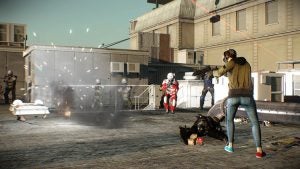 In the game, the challenge of a heist and the ensuing conflict is achieved simply by throwing more police and SWAT team lemmings at you. They meander around in the open, seemingly not knowing what they’re doing, where they’re going, or, indeed, where you are. Some walk blindly into wide-open spaces, meaning they’re easy to pick off. There’s no sense of strategy, flanking, or even a moment’s thought to the battles.

Then there’s the partner AI, which is somehow even worse. Your AI teammates are able to move behind cover and shoot at baddies (or, more appropriately, the good guys, seeing as we’re bank robbers), but that’s it.

In a mission where I had to find two armoured vehicles and take out the two safes hidden in each to an extraction point, they refused to pick any of them up. This meant I had to make four separate trips across the entire map – an incredibly frustrating and mind-numbing experience, which only further brought to light the stupidity of the cops.

Online isn’t much better, either, you’re still stuck with the horrific enemy AI, only now you’re also dealing with the Switch’s poor voice chat implementation, and once again the developer has taken no steps to add additional features to the Switch to alleviate this such as D-Pad shortcut commands.

Then there’s the performance of the game itself, which is also sub-par. I consistently suffered framerate drops throughout each heist, and this wasn’t even during intense sequences. While this hasn’t resulted in a failed mission, its consistency means it’s very much a nuisance.

Payday 2 continues to maintain a very dedicated audience, but even fans of the game are unlikely to enjoy what’s being put forward for Nintendo Switch. Stripped-back visuals, poor performance and a lack of adaptation to the console results in a shoddy port at best.

It’s ironic that a game about heists is trying to jump on a bandwagon and rob you of your hard-earned cash.