Available on Xbox One, PS4 (reviewed)
When Payday 2: Crimewave Edition gels, it’s one of the most exciting co-op shooters around. Crouched behind a shattered window in what used to be a bank, firing away with an assault rifle at squads of incoming cops, rushing to revive a downed comrade as the bullets fly, it feels like you’re on the set of Michael Mann’s Heat, doing your best to keep your head above water as the carnage kicks off. Working with a smart team of crims, focused on objectives and covering each other’s’ backs, the score pounding through the speakers or your headphones, it’s a joy to play.

The new PS4 and Xbox One Crimewave edition delivers plenty of these moments, too. With a full year’s worth of DLC it crams in a wide range of missions, covering everything from your straightforward bank heists and jewellery store robberies to security truck ambushes, election-rigging campaigns, nightclub raids, train interceptions and thefts from an uptown gallery. Each brings new objectives, wrinkles to be ironed out and cops to be gifted with an early retirement, and the action can be spectacularly intense.

While Payday 2 is effectively a Horde-style shooter, where you tackle wave after wave of enemies of increasing difficulty, the different missions and objectives help keep the gameplay fresh. There’s even a mission where a gang-lord’s drunken, drugged-up brother has to be dragged from the wreckage of his crashed helicopter and escorted to a lumber mill for extraction. It’s hard to hate a game where the VIP to be rescued is a stumbling, puking, prone to crashing moron. There’s even a mission that’s effectively a Hotline: Miami level in glorious first-person 3D. 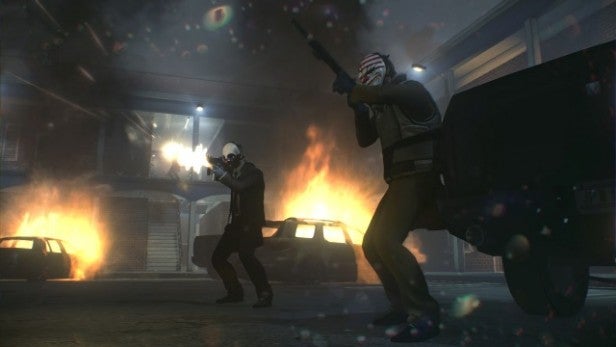 But here’s the thing: at the moment, actually getting to those moments is no picnic. You can blame early days matchmaking issues for some of the problems, but Payday 2 can be every bit as frustrating as it can be thrilling.

Hopefully, the connection issues we’ve experienced are either temporary or not widespread. To join a game, you need to log onto Crime.Net, a map which continually updates with open heists, each one with a map, a mission-giver and a mission, plus details on the difficulty level and the number of players already in the lobby or actively playing. Click on the open heist and you get more details plus an atmospheric audio recording, setting you up for the job to come. Theoretically speaking, this should be followed by the lobby, where you get a chance to tweak your loadout or upgrade your skills and perks before the game starts proper. Sadly, in roughly 3 out of 4 times we try to connect, we’ve had nothing more than an error message.

Of course, you don’t necessarily need other players to play Payday 2. You can launch Crime.Net offline and play through the missions with bots. Unfortunately, this turns out to be unsatisfying at best, and impossible at worst. It’s not so much that your CPU-controlled chums can’t be trusted to organise a booze-up in a brewery, but that they can’t even be trusted to poor the booze in the right orifice when you put the bottle in their hand. They can’t complete objectives, only follow you around and shoot the occasional cop here and there. Even that proves tricky at times.

The good news is that when you do find a working game, the whole thing flows pretty smoothly. Payday 2’s missions are so clear in their objectives that only the most tragic, dunce-cap wearing player can fail to follow them. In most cases, you just need to crack a safe or break a lock with the aid of a high-powered drill, then drag some bags to the getaway car without getting killed. In others, you’re just asked to survive long enough for the getaway car or helicopter to arrive. 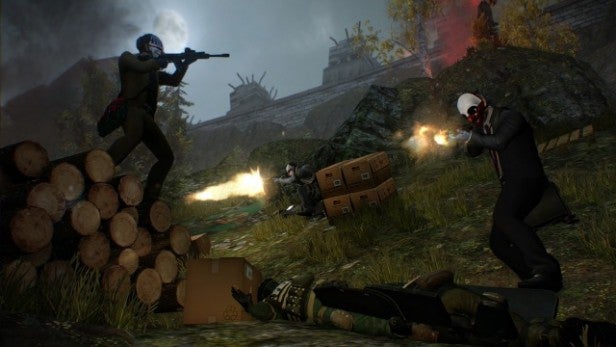 Voice chat definitely helps, but even without a system of smart prompts helps more experienced players lead their less experienced colleagues to victory. Sure, you’ll find some dimwits failing to jump into the getaway van or racing back into a cop-crammed jewellery store when the rest of you are waiting to escape, but even the worst cases are learning – and we all need to start somewhere.

There’s also a strong persistent progress system working behind the scenes. Experience earned through heists can be spent to upgrade abilities across five selectable character classes, each one with its own skill tree, perks and equipment. You’re free to specialise in one area, or spread your skill points across two or more classes for flexibility when joining missions. Meanwhile, the cash you bring home can be splashed out on new assault rifles, handguns, shotguns and SMGs, not to mention bulletproof vests and explosive devices. The more you play, the more valuable an asset you become to your team.

Yet frustrations still find their way into the action. For a start, too many missions rely on drilling your way into a safe or bank vault, and while we don’t have a problem defending these from the cops, we do have a problem with the fact that the bloody things continually break down, needing a painfully protracted restart, often under a withering onslaught of incoming gunfire. This begs two questions: one, why don’t our hardened criminals try another more reliable brand and, two, who at Overkill actually thinks that this tiresome mechanic makes an action-heavy shooter more enjoyable? Does the Peter Dinklage droid pull this sh…, erm, stuff when he’s cracking locks in Destiny? We think not. 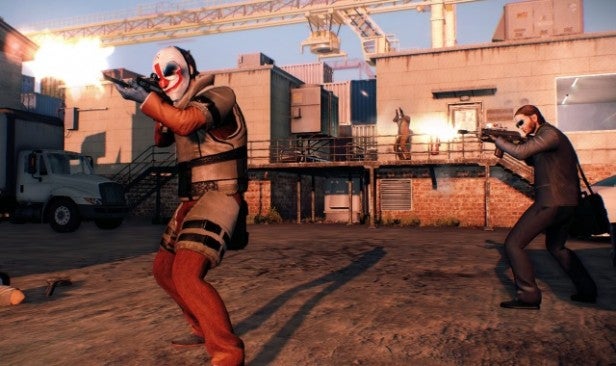 Meanwhile, several missions put the focus on stealth rather than all-out blasting, but the guard AI is neither smart nor predictable enough to make this workable, and the game’s feedback systems aren’t up to the job. Some people out there might be completing the stealth missions successfully, but in our experience the team fails three or four times before everyone gives up.

It also has to be said that the PS4/Xbox One Crimewave Edition isn’t a vast step forward from the Payday 2 that released last year. Additional masks, characters, missions and bundled DLC mean you won’t get bored, while a new character class – the fugitive – gives old hands something new to get their teeth into. However, the new pre-mission planning phase is all but meaningless, the new characters are nothing more than skins, while there’s still no real point to the in-game safe house. It might be fun to play as Keanu Reeves’ John Wick or don a Hotline Miami mask, but are these additions any more novelties? Sadly, no.

Most seriously, while the game now runs smoothly at 1080p, though not at a locked 60fps, the visuals are more functional than dazzling. Interiors are blocky and poorly furnished, while the urban settings are equally low on wow factor. Some surfaces are shinier and key textures have been updated, yet Payday 2: Crimewave Edition still looks like a slightly crisper version of a last-gen game. Meanwhile, some fairly primitive smoke effects and lighting make visibility a real issue in some missions. Getting blasted by some guy you can’t see behind a dated-looking smoke cloud is nobody’s idea of fun. 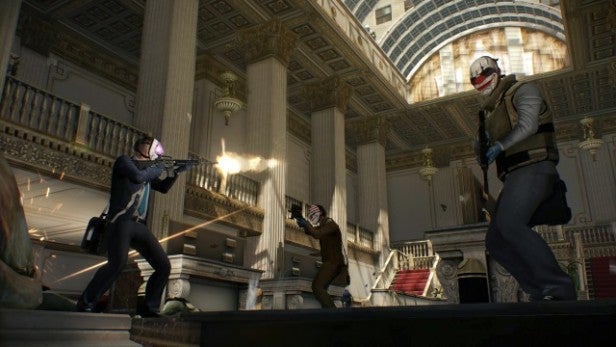 There’s an argument that, once the bullets start flying, you’re too busy blasting to admire the scenery, and Payday 2 does a lot with exploding plaster, smoke and splattering blood. All the same, you can’t help feeling that we should expect more from a PS4 or Xbox One game. This, the game’s various irritations and the current connection woes are enough to rob Crimewave Edition of a higher score, but would we love to see what the team at Overkill could do with a true next-gen Payday? You bet your last unmarked dollar that we would.

Verdict
Look past the unimpressive graphics, shoddy team AI and connection issues, and Payday 2 is as exciting a co-op shooter as it was last year. In fact, bar a 1080p resolution and a smoother frame-rate, it’s the same co-op shooter that it was last year, though there’s enough additional content and bundled former DLC to make it a tempting package. There are too many irritations and frustrations to make it a must-have game, but if you like the sound of Payday’s heist-related high-jinx, then the Crimewave Edition is the way to go.