Are you the kind of person that argues over the definitions of character alignments during a role-playing session? Do you have a remarkable amount of free time, and the discipline to devote it all to one life-consuming odyssey? Do you relish in playing Baldur’s Gate on the ‘Core Rules’ difficulty setting?

Welcome to Pathfinder: Kingmaker. Leave your shoes at the door, you’re in for a comfy stay. Developed by Owlcat Games, this is another title in the saturated dynasty of the Kickstarter-funded RPGs that have cropped up in droves as of late.

From Wasteland 2 to Pillars of Eternity, games of this style have been popping up and pleasing old-school computer RPG fans in varying degrees, and by now, there are multiple remasters, reimaginings and bold new explorations of the genre readily available to scratch whatever itch you’re feeling.

So, where does Kingmaker fit in the market? Well, Owlcat is in partnership with Paizo, the publishing house behind the popular tabletop system Pathfinder, which is a divisive spinoff of  Dungeons & Dragons. Owlcat has done everything in its power to transport the incredibly popular physical experience of Pathfinder into the framework of a CRPG. 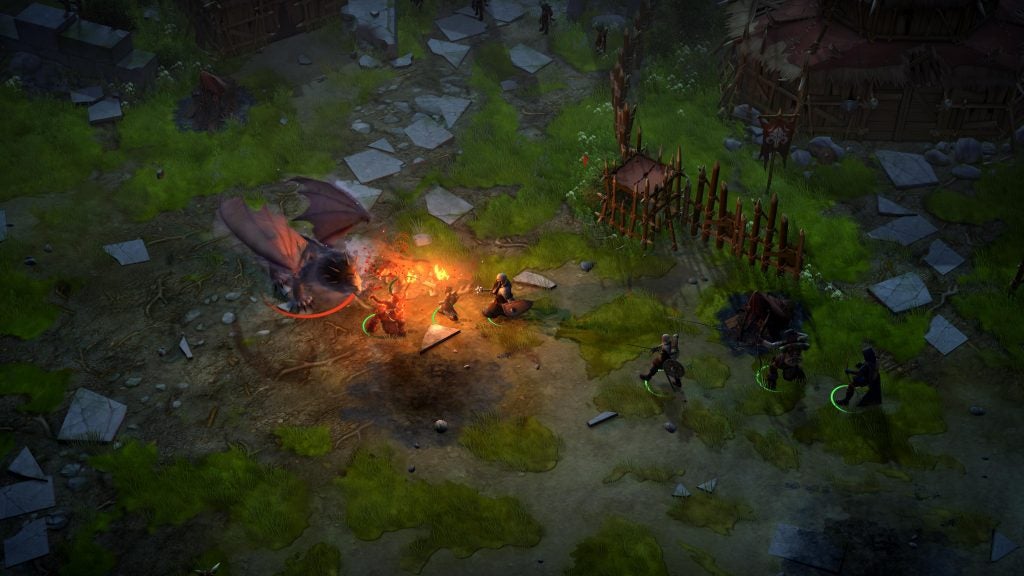 This overwhelming commitment to the source material is the means by which Kingmaker distances itself from its competitors, but is also the millstone that hangs around its neck. Pathfinder: Kingmaker is easily one of the most scarily comprehensive video games I’ve ever played. It is absolutely caked in systems from the first moment to the last.

For anyone with even a slightly indecisive streak in them, character customization in any modern RPG can be a daunting process. Kingmaker’s approach, in comparison, is almost impenetrable. It is the Fort Knox of character customizers.

In standard high-fantasy fashion, you pick your race and class, but there is an overwhelming amount to choose from, with numerous subclasses situated within each. I chose to play as a high-elf Barbarian called Bingo, but I decided to specialize as a ‘Mad Dog’ which invokes some druidic skills, affording me a war beast, a Smilodon (it’s a type of saber-toothed tiger, I had to look too – Ed)  that I affectionately referred to as Garfield. If you don’t fancy that, you can be something as zany as a Bard Archaeologist!

Following this, you pick your statistics, feats, abilities, spells and skills. This results in a fully featured and highly impressive character sheet. Unfortunately, one of Kingmakers core problems rears its head here. When picking individual abilities, unless you’re familiar with the intricacies of Pathfinder (I’m not), you probably don’t understand what most of your abilities are going to do. 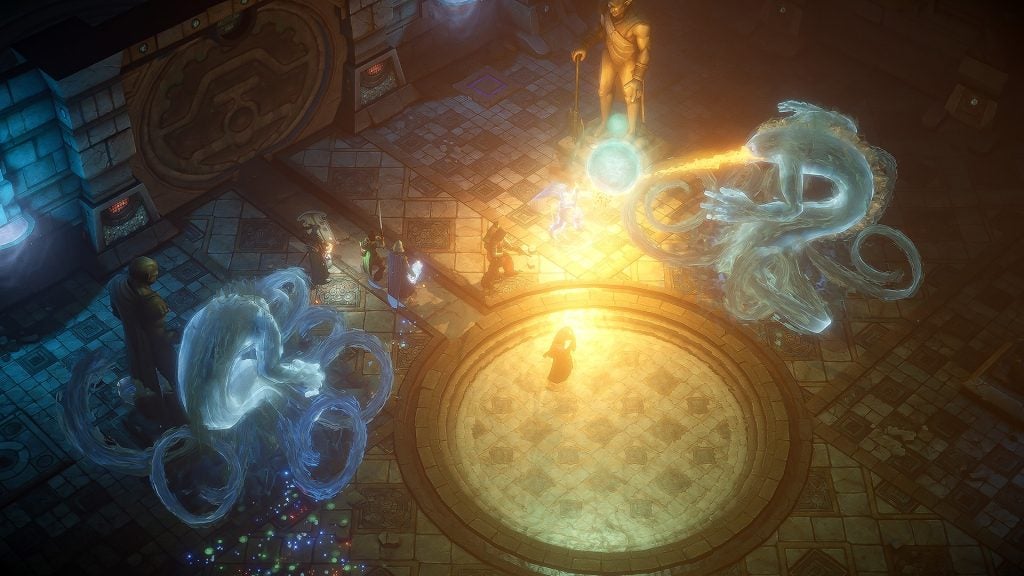 At some point, you will have to cede and just go with what sounds cool. This extends to battle where certain enemies require a specific approach that isn’t obvious or the answer to your prayers is held up in the pre-ordained Pathfinder bible, a book you may not have read. Sadly, to my knowledge you can’t respec either, meaning build choices are final.

Early struggles with Spider Swarms are well documented among players already, and I was equally confused when none of my attacks were working and I couldn’t advance, hitting a hard wall very early in my playthrough. This was the rude awakening to the cruel world I had found myself in. Kingmaker is a game that you’re going to bounce off of hard if you don’t know what to expect. Luckily there is enough variety in your early party to get you through most scrapes with a bit of research, and it highly rewards careful planning and tactics.

Yet, I find that the battle system is at odds with itself. Not quite turn-based, combat occurs in real-time but encourages you to pause and carefully tinker with each characters abundance of abilities to outsmart your foes.

Personally, I found that in the early game I was just right clicking enemies and foregoing any tactics because pause-planning seemed an overwhelming waste of time. Though when the difficulty curve sucker punched me, I realized how important the spacebar is. It’s certainly a rewarding experience to topple a tough set of enemies with clever tactics, but it draws a thin line between endorphins and pure tedium. 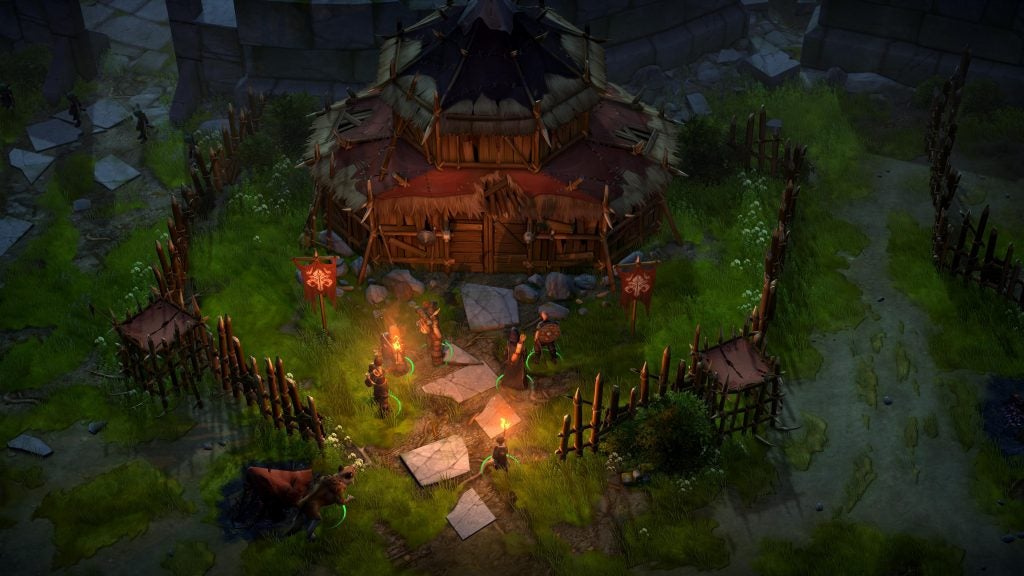 You can customize the difficulty of the game, which is a wonderful and necessary addition. If you don’t like the normal experience you can just tweak settings until you create the game you want to play.

This felt like an unfortunate solution to let me play the rest of a game, for me, felt deeply unfair. For hardcore players, this could be the perfect tool to make Kingmaker as old school as possible.

With everything it has to offer, it’s a shame that it doesn’t match its systemic commitment with any visual flair. The options for aesthetic customization are limited and character models are lacklustre.

Even character portraits are re-used for NPC’s, which was a sad reminder of how disconnected I was from my character. Of course, the isometric viewpoint mitigates a lot of this, and it’s a passable game from afar, but don’t expect anything close to the gorgeous world of Divinity: Original Sin 2, which easily blows it out of the water. 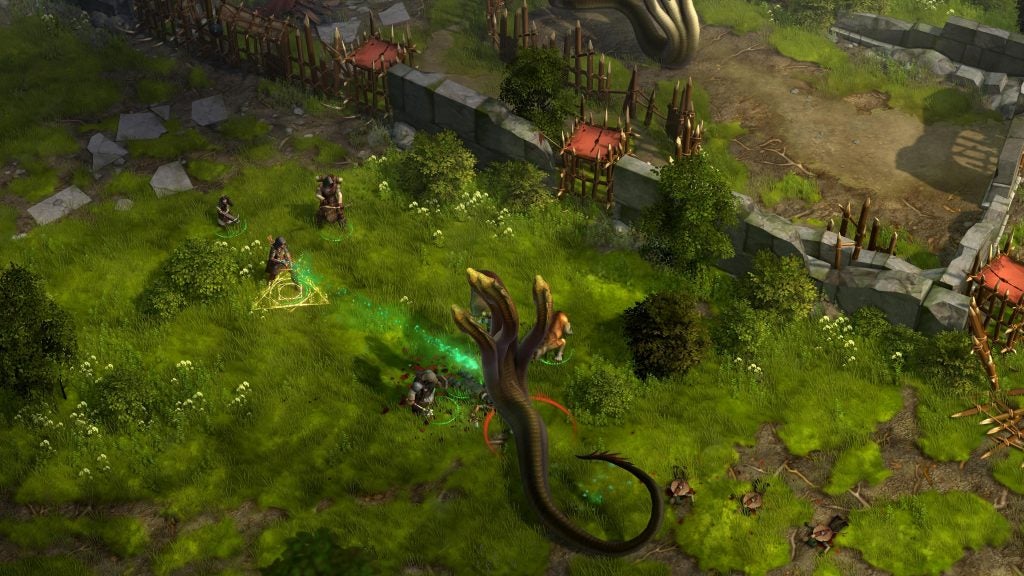 I also found visual effects on spells and attacks to be disappointing. Whilst you can see all of the dice rolls and checksums occurring in real time in the bottom right corner, the visual aids for this aren’t up to much, so you don’t feel so powerful after all, and the speed of combat means all of your tactical choices vanish instantly without much gratifying feedback.

It is so intricate that it often becomes annoying if you’re used to the modern RPG conventions. In one case, I picked some vegetation for a side quest only to find that they had soured by the time I handed the quest in. As well as an overall encumbrance for your shared stash, companions can suffer from encumbrance.

This naturally hinders your movement speed. To me, this seems highly unnecessary in a game that already moves at a snail’s pace, but if you’re looking for this kind of gritty pen and paper realism, you can soak it in and lavish in dropping each individual item that the game compels you to pick up. 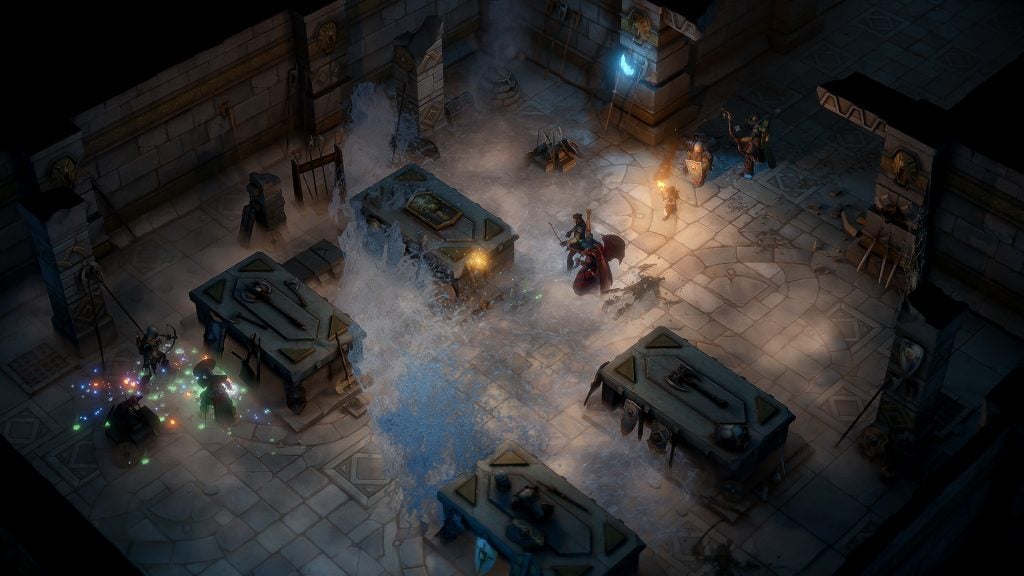 Resting is a system that Owlcat has grafted from the tabletop to the screen and is one of the few cases where it feels better than its board game counterpart. Once I figured out how important rations were, it felt rewarding to assign certain companions to jobs like cooking or hunting to utilize their specialities and reap the rewards. I also really enjoyed the ‘formations’ menu which allowed me to arrange the layout of my companions like I would in the pause menu of a FIFA game. When I figured it out, crucial key presses like hitting H to hold or Backspace to select my entire crew were highly appreciated also.

Barony is the most novel inclusion in Pathfinder: Kingmaker. You can essentially rule your own kingdom within the world, which plays out like an extremely fleshed out version of Fable 3’s endgame or Dragon Age: Inquisition’s War Table, where you can assign characters to be envoys for certain discrepancies. It even invokes aspects of city building titles, and is a good bit of fun in a game of this setting, with NPCs referring to it outside of the dedicated screen. To be honest, it could be a highly successful game on its own if you stripped away everything else around it.

Unfortunately, because there is so much more to think about, I eventually decided to automate it. Dealing with tax loopholes back home on top of everything else became almost a bit too absurd for my already overcooked brain.

Genre veteran Chris Avellone served as narrative designer on Kingmaker, and to his credit (and the team behind him) there are some excellent characters and situations that you stumble into.

There is unfortunately a lot of bogged down filler dialogue that really doesn’t need to exist, leading to a sea of conversations that don’t serve a purpose. There is a clever built-in system that highlights certain words that demand an explanation, but this is a testament to the overwhelming amount of Pathfinder lore baked into the narrative.

Illustrated story sequences also break up the monotony and offer welcome choose-your-own-adventure segments where you are posed with tough decisions. UI design is brilliant, with the amazing tabletop themed map screen punching me with nostalgia for previous D&D campaigns and inspiring a genuine sense of curiosity.

Unfortunately, this is let down by bugged upgrade screens that wouldn’t let me see the spells I was deliberating over. Pathing issues and bugged NPCs were also present at random intervals. There are definitely cracks in the veneer that will hopefully be ironed out by the developers in the coming weeks.

By committing to the systems it draws its name from, Kingmaker creates a deeply comprehensive and satisfying CRPG that is also incredibly lonely and masochistic when it wants to be.

If you fancy playing a painstakingly crafted virtual game of Dungeons & Dragons with HAL 9000 as your GM (and don’t get me wrong there are many of you out there), then this game is for you.

If not, you may enjoy the great voice acting and novel Barony system, but you should stick to more palatable CRPG’s that don’t assume so much knowledge and offer more than a modicum of respect for your free time.