Available on Xbox One, PC

I’m not one to boast, but I’m carrying a sword that spits out fireballs with every swing, while my shield creates a wall of ice that crushes my enemies as it holds back their attacks. My boots are imbued with the power to leap into battle and scatter my foes. And if I don’t like these abilities, I can change them just by switching my weapons or replacing the magical gems I’ve socketed in them. Skills and attributes matter in the endless skirmishes of Path of Exile, but in this game, building your character is all about the gear.

Path of Exile is an action RPG in the Diablo mould – or, more particularly, the mould that spawned Diablo 2. It’s darker and more sinister than Diablo 3 and a little more hardcore, swapping the polish and production values of Blizzard’s epic for ludicrously deep character progression and a more aggressive attitude. It’s been available for a few years on PC but is only now making its console debut on Xbox One. The other thing you need to know is that it’s free to play.

By that I don’t mean that it’s the kind of game where you can play it free; but, rather, the whole experience is designed to extract regular micro-payments. There are no dubious practices where you have to buy gems with real money or splash out to avoid delays. No, you can actually enjoy the game while paying nothing. There is an in-game store where you can buy pets and a range of cosmetic enhancements, but I’ve been playing it and having a whale of a time without coughing up a single penny. I’m not sure how the good people at Grinding Gear Games scratch a living from this, but I guess that’s their concern. I’ve played full-price games that are greedier for your micro-transaction cash. 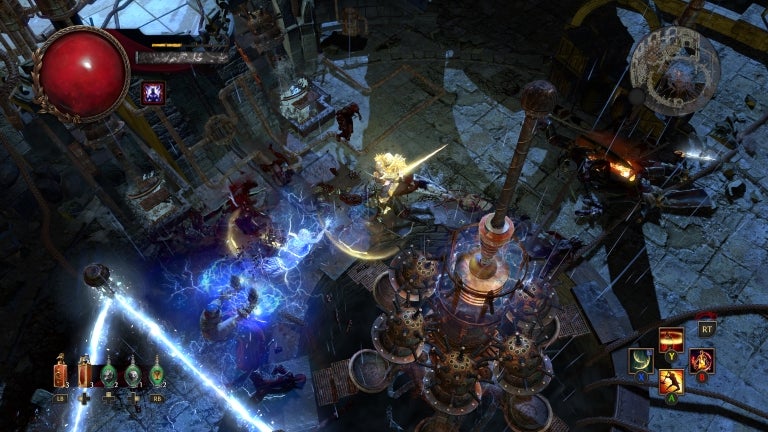 There’s something a little ambiguous and minimalist, even Dark Souls-like, about the storytelling. You play an exile dumped on a cruel, inhospitable island for your crimes of thought or deed against an oppressive empire. Your quest for the first few hours is simply to survive, then by taking on quests for your fellow exiles, strike back against the corrupt forces that have put you here.

The best way to do this, of course, is to slaughter epic quantities of shambling undead drowners, feral cannibals, goatmen, skeletons, assorted beasts, psychotic apes, tentacled monstrosities, dodgy soldiers, evil bandits and a whole lot more – often because they won’t stop attacking you while you’re trying to get from A to B. In other words, it’s hack-and-slash action all the way.

This is where all those gems and sockets come in. Your current weapon has one weak default attack, mapped to the A button on Xbox One, but by collecting gems and sticking them in every available socket on your weapon(s), shield or armour, you can use a range of more powerful, often magical attacks, triggered by the other face buttons alone – or with an R trigger modifier.

These gems don’t just boost your damage per second or attack speeds, but actually define the attacks you can pull off; this could mean a criss-cross double-swipe, a crowd-clearing slash, or some other brutal blow. Other gems act in a supporting role, imbuing your attacks with elemental damage, or increasing the area of effect. Others still act as spells or magical abilities, so that you can, say, summon a totem with a bound guardian monster who’ll batter any enemies in range.

Needless to say, the actual combat is only half the challenge. Sure, Path of Exile throws enemies at you thick and fast, expecting you to hammer away at the face buttons to reduce the rush of monsters to a manageable crawl. However, while there’s some skill in selecting attacks, positioning and crowd control, there’s arguably more in building and tweaking your character and load-out to handle every situation.

This means not just upgrading your weapons and optimising gems and sockets, but also using the elaborate passive ability skill tree to create a build that supports your chosen style of play. 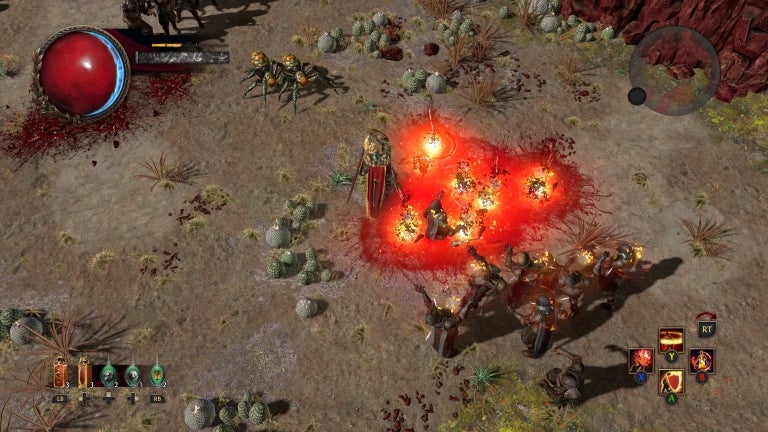 The progression systems may seem over-complex – and there’s a lot of micro-management – but it offers an enormous amount of flexibility. Path of Exile has Diablo-style preset characters, covering your basic warriors, witches, bow-wielding rangers and assorted rogues, but you can set up your character to borrow abilities and combat styles from across the whole range. And – as in any good Diablo clone – the simple cycle of slaughter, levelling up, looting, upgrading and quest completion makes for a devilishly addictive time. Path of Exile is every bit as more-ish as the bigger name action RPGs.

That doesn’t make it a Diablo 3 killer. Visually, it isn’t bad at all by the standards of the genre, with well-designed creatures and some beautiful scenery. The console version benefits from less screen furniture and a more dynamic close-in view. However, you can see signs of a team working hard to stretch fewer assets, while Blizzard’s mastery of art, animation and detail puts Diablo 3 on a different level – although some hardcore D2 fans will prefer Path of Exile’s less colourful style. I’ve also found Path of Exile more linear and one-note than Diablo 3, although sheer drive takes it an awful long way.

More seriously, the Xbox One version isn’t exactly a paragon of stability or technical polish. While it’s a lot better than the initial closed beta, it still hangs or disconnects from time to time, while the action is regularly interrupted by sudden freezes, followed by an equally sudden burst of hyper-speed motion, presumably as the server catches up. It requires a live server connection, so there’s no getting around this, and it can result in a death if it happens in the wrong time at the wrong place. I’ve docked half a star from the score with this in mind. 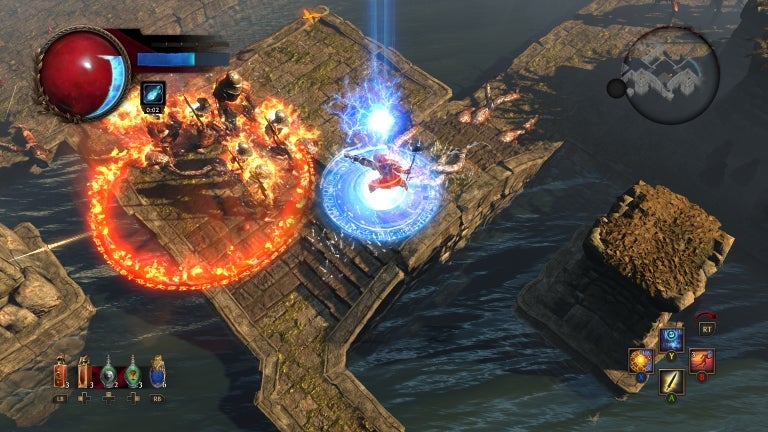 Luckily, Path of Exile has some other advantages to compensate. The community seems pretty friendly, and the MMO-style shared town spaces give you opportunities to socialise or trade directly with your fellow adventurers. You can also play co-op with up to five players, and since the game is effectively free to enjoy, that’s great news if you have a bunch of Xbox One-owning mates. You’re not asking anybody to invest any cash just to join you online.

Most of all, there’s a generosity of spirit here. True, Path of Exile appeals to the more hardcore action RPG fan, but that doesn’t mean it’s inaccessible or difficult to pick-up. It feels like a game made for fans by fans who don’t want to stitch up those fans. Tweaks, enhancements and the expansion from four acts to ten makes the console Path of Exile even more of a steal than the PC version was at launch (and the free Fall of Oriath expansion gives PC players parity there).

It isn’t perfect and its technical issues need serious work. Overall, though, Path of Exile is a cracker of an old-school action-RPG. And it’s free. Do you like Diablo? Want to take your first steps into the genre? Well, frankly, what the hell have you got to lose?

It’s a bit buggy and prone to repetition, but Path of Exile is a free-to-play Diablo clone that’s seriously worth playing. It’s dark and stylish-looking, with a rich and interesting progression system – and the cycle of slaying, looting and upgrading is as compelling as it is in Diablo 3. Given the price, it’s hard not to recommend. Grab some friends if you can, then join the trail.