Available on PC (version tested), PS4 and Xbox One

Videogames have a unique ability to represent the fabric of dreams, almost more so than any other medium. After all, their very nature is a constructed but interactive reality, and we’ve seen the likes of BioShock Infinite, Hellblade and The Evil Within play on those ideas, creating worlds and experiences where reality and unreality blend or fracture, often to mesmerising effect.

Past Cure, an indie from new German studio Phantom 8, looks to capture that same sort of magic. It references Inception in its marketing material, its trailer is quite literal about dreams and perception, and it actually opens with a dream sequence. However, that’s where the comparisons between this and the aforementioned trio of excellence die. 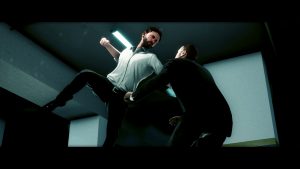 Old Ian is a troubled soul, looking almost exactly like Ethan from Heavy Rain – vacant expression and all – and haunted by a recurring nightmare where mannequin men try to kill him. He’s also lost the past three years of his memory, and has only the voice of his brother Marcus to guide him. Ian is having a tough time.

Well, Phantom 8 seemingly wants players to experience a similar fate to Ian, since the opening two hours of Past Cure are just about the most arduous tutorial you could ever hope to experience. A glacially slow plod through its various systems, almost all of which you’ll have intimate knowledge of from a million other games (aim, shoot, punch), replete with laboured story scenes where disconnected voices blather on about nonsense that will only make sense nearer the end of the game.

Outside of the most obvious action mechanics, Ian can also astral project and slow down time. Don’t get too excited, though – projection is used for little more than to disable security cameras or activate switches (in the form of pulsing clouds of bubbles ) during one of the game’s lengthy and tedious ‘white room’ sequences. And don’t expect to be flying about the place like Neo or Max Payne in slow motion; it literally just slightly slows down enemies. 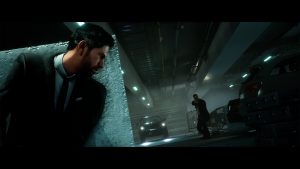 You’ll need to use it, though, as Past Cure has some of the worst combat encounters seen in a game in the past 15 years. Once the tutorial finally ends, Ian is sent on a mission to a hotel – which has the largest and most nonsensical parking lot across most of its surface area. Here, cars are parked at angles and in places that would be almost physically impossible without hours of maneouvering. All so identical guards can slowly patrol, waiting for Ian to arrive.

Stealth is about as exciting as usual – either get spotted or don’t – with an amusingly matter-of-fact stealth kill as your reward for plodding up behind an enemy. Most of the time, though, you’ll be shooting.

Gunplay has the potential to be fun. The raw action of shooting feels nice and there’s a satisfying head-snap when you reel off a headshot, plus some amusing ragdoll animations as they crumple to the floor. However, that’s only when Past Cure actually deems that you direct-shot-to-the-cranium actually hit.

The game has truly awful collision detection. One enemy took five bullets to the head before the final one actually ‘counted’. Action games in 2018 just don’t play like this anymore. Couple this with AI that would struggle to outthink an unconscious Danny Dyer, and you have an experience that’s as frustrating as it is boring.

Other maddening decisions rear their head regularly, too. Checkpointing is poor, often sending you back multiple encounters as punishment for one tiny mistake (or, more likely, because your bullets didn’t register). Signposting is inadequate: one section had me searching Ian’s rather nice seaside house for over 20 minutes looking for his ‘equipment’, with no real indication of what that was (it was his gun). 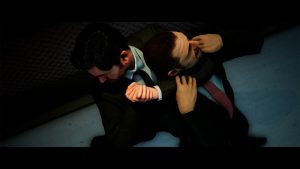 Such errors would be forgivable if the gameplay was remotely inspired, or even if the story lived up to the promise of its influences. But when you reference Inception, actually have Moonlight Sonata playing as part of the story (either a misguided nod to Resident Evil, or the result of zero research), and use cinematic borders like The Evil Within, you’d better come up with something better than this.

Past Cure won’t be held up as a shining example of how to represent mental health issues in games, either. Admittedly, there’s little point expecting subtlety and gravitas in a game this poor, but when you’re asked to top up your ‘sanity meter’ with blue pills, which also doubles as your ability to manipulate the laws of time and physics, it isn’t going to win any awards.

To top off a rather miserable experience, the PC code reviewed here ran poorly. With no graphical settings to change (despite the menu option to do so), it’s impossible to know if there are ingrained engine issues or whether problems are hardware specific. Nevertheless, when the same room runs flawlessly one minute and skips like a scratched CD the next, it’s hard to lay the blame on the PC.

There’s always a temptation to cut indie studios some slack. Clearly, Past Cure has a much lower budget than most action games, and it’s refreshing that the team didn’t use crowdfunding to get their project off the ground.

However, the game still asks for that most valuable of things from potential players: time. And I could never possibly recommend wasting that time with Past Cure.

Sadly, the name says it all.