Portable speakers tend to be inherently compromised. Sound quality, volume, battery life, portability and adaptability are all traits desirable in such a product, yet they often work against each other. You want good sound quality and high volume? Well then the speaker must be big – too big to chuck in a suitcase. Want portability and adaptability? Well then make it small, too small to really fill a hotel room with satisfying sound. What’s the solution? Buy a Pasce Minirig.

Pasce is a tiny British company started by one man with (so far) one great idea. That idea is the Minirig, a portable speaker that pumps out 15W of power, lasts for an average of 50hrs and yet, is little bigger than a roll of parcel tape. 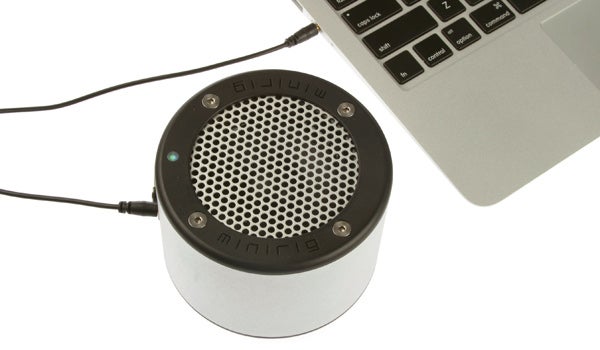 How does this little gem achieve all this? Well, it helps that Pasce had the idea to fit the shape of the device as closely as possible to that of a speaker. One flat face of the cylinder is entirely taken up by a 3in driver, while all the rest of the electronics are packed into the 72mm-deep space behind.

This makes it small enough even for camping trips and plenty compact enough to pop in a suitcase. One thing worth noting when it comes to camping is that this isn’t officially a ruggedised device. We’ve been told Minirigs have survived the odd rain shower but a full submersion won’t do it much good, and while it’s well built, a life in the bottom of a camping bag will soon mar its beautiful aluminium chassis – you could perhaps cut down the cardboard tube that it’s delivered in to make a protective case. Pasce says a neoprene case will soon be included to give that final level of bump protection but these aren’t yet shipping. 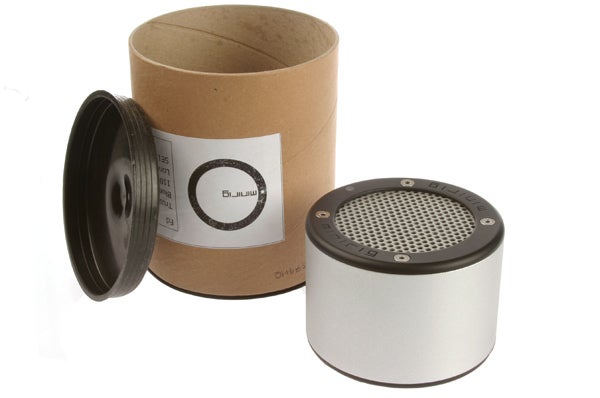 It’s this style and build quality that is the second remarkable thing about the Minirig. Sure, for £80 you’d expect something of a certain quality but the premium materials and craftsmanship on show here are nonetheless impressive. The bulk of the chassis consists of a sturdy machined aluminium cylinder, with a lovely sand blasted finish. This is then capped by tough polycarbonate rings, inset into which are the hex bolts that hold the whole thing together. Over the driver there’s a thick grille made from yet more aluminium, and finishing the lot off are four clear rubber feet on the bottom that keep the whole lot securely sat.

There’s a particular minimalist aesthetic and attention to detail that really sets the whole thing off as well. All the ports are lined up on one side, and none are labelled (don’t worry, it’s easy to tell what’s what), so as little as possible breaks the symmetry. Pasce has even gone so far as to use a 5.5/2.1mm barrel power connection, rather than say a USB port. Actually, this is rather annoying as we would’ve thought a miniUSB or microUSB connection would’ve been more useful, in case you loose the single included USB-to-barrel cable provided in the box. At least charging time is relatively modest at around 6-8 hours for a full load.

You may have already noted that there are two 3.5mm jack sockets, set above and below the power input. No, one of these isn’t for headphones or adding a second stereo speaker. Instead you get a choice of high or low gain inputs, respectively. The choice allows you to get the most volume from low power outputs such as phones and MP3 players using the high gain input yet remain distortion free when using high-power outputs such as from laptops. The reason for needing this arrangement is that the Minirig doesn’t have a volume control but instead relies on you controlling the volume using your device – yet more minimalism. 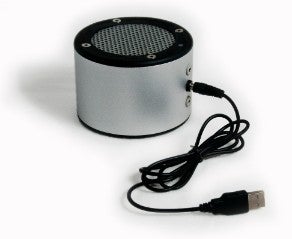 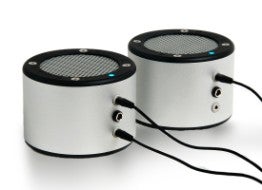 You can also use the low gain input to string two Minirigs together. However this doesn’t create a stereo arrangement – which would be very cool – but rather just increases the maximum volume. In fact you can add multiple Minirigs together in this way, so if you and all your mates have invested in Minirigs you can really crank out the tunes. If you do want a stereo effect you can use a splitter cable to feed each Minirig just one channel, and again Pasce may be including these in the future but they’re not here yet.

As well as lacking a volume control, the Minirig also does without a power switch. Just plug in a sound source to one of the jack sockets and it automatically powers up.

This will illuminate the battery indicator light, which further shows Pasce’s attention to detail. It doesn’t just light up but does so in different colours depending on how much battery power is left. If the device is fully charged (90-100 per cent) it glows green, 25-100 per cent it will be green/blue, 25-30 per cent just blue, 0-25 per cent purple and if there’s not enough power to keep the amplifier going it’ll glow red.

Clearly the large variance in the width of each band of colour means it isn’t quite as useful as if it had an even 25/50/75/100 per cent split but it’s still really useful to know at a glance if you’ve got a reasonable reserve of power. And as for those claims about the longevity of the battery life, they’re entirely true. It officially varies from around 9 hours to 60hours depending on volume but that average of 50 hours is achievable at a more than adequate volume for contented listening. We’ve been using a Minirig on and off for two weeks now and it’s still showing green/blue.

So the Pasce Minirig is clearly a tour de force in terms of ingenious design and engineering but what’s ultimately going to matter when you’re holed up in a hotel room or looking to accompany your camp fire with some lilting summertime tunes, is how good it sounds. And, the answer is very good. Very good indeed.

What’s most striking is just how loud it is. You’ll easily fill any sensibly sized house or hotel room, and in fact you’ll be splitting ears if you really crank it up – not that you’d want to do that. At such high volumes, while a dampening circuit kicks-in to stop the device damage itself, the audio does deteriorate. But for sensible listening levels it excels. 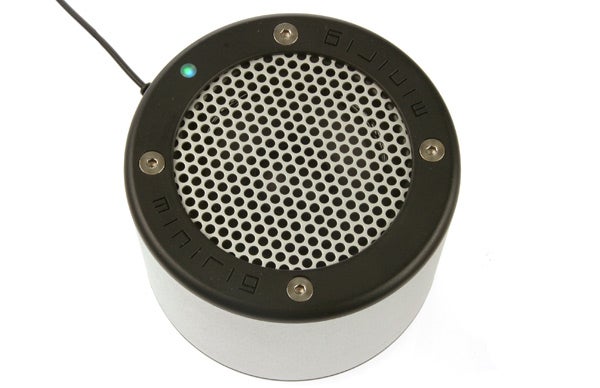 As well as volume you also get depth with far deeper bass notes than any laptop or most comparable portable speakers can manage. With a frequency range of 100 – 20,000Hz, you’re not getting quite the lowest rumblings but for its size, the range is astonishing.

Clarity is also good, though not exceptional with a tendency for instruments to muddle together a little. Again, though, for its size you won’t be disappointed.

There are two downsides though; the device’s shape and the fact that it’s mono. While that round shape allows you to get the most volume from the least volume (so to speak), it isn’t conducive to being placed either side of or on top of a laptop (various portable speakers can split into stereo or nestle in the hinge of a laptop). As such you have to place it off to one side making the sound somewhat detached from what’s onscreen, which is a little odd when you’re watching a video.

It’s this same scenario that is the problem with the restriction to mono. While you hardly get a huge amount of stereo separation on any portable or laptop speaker, those that do offer stereo, do immerse you that little bit more when used close up. As such, the Pasce Minirig really excels at simply filling a space with sound, with the best listening being from a distance.

You could argue there’s a further downside in that this is a wires-only device with no wireless audio system such as AirPlay, Bluetooth or Kleer onboard. However, while this certainly would’ve been nice, it would’ve meant bringing that old word “compromise” back into the equation. Size, price and battery life would all likely have been affected. 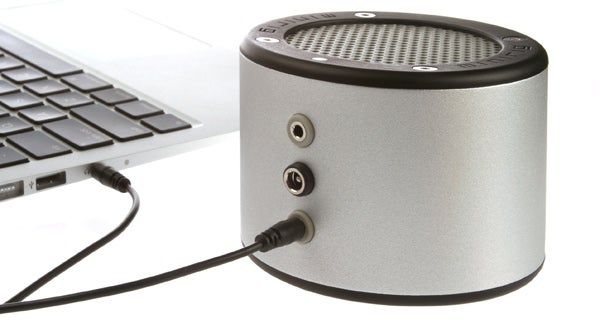 For it’s size and price, the Pasce Minirig is really without equal though if you’re willing to cast your net wider to include larger devices, the choice becomes vast. From the wireless sporting Bose SoundLink Wireless Speaker and Aliph Jawbone Jambox to the iPod dock equipped Philips Fidelio DS300, to the laptop sound bars we were talking about earlier, such as the Edifier Soundbar. For its power and versatility, though, we’d pick the Minirig over the lot.

The Pasce Minirig is a quite brilliant portable speaker. It may lack the wireless and stereo capabilities of some rivals but if you’re simply after the loudest, smallest and longest-lasting speaker around, this is the top dog. All this and it’s also beautifully built and relatively competitively priced.