It might seem like a misnomer, but if Particle Mace proves anything, it’s that it’s possible to feel utterly claustrophobic in space. Yes, despite being amongst the seemingly endless expanse that is the universe, you can feel crowded, penned in, even hunted amongst the stars – well, when taking on Andy Wallace’s high-score chaser on your iPhone, that is.

Here’s a game where, from the word go, you find yourself utterly surrounded by comets tumbling towards your position and enemy craft keen to track you down and take you out, without so much as a weapon to fire in fear. And, for the first few tries at least, you’re not likely to survive said assault for more than a few seconds, either.

Viewed from the top down, Particle Mace’s 2D take on space is a game of survival, with a virtual thumbstick at the bottom of the screen your only influence on proceedings. Guiding your ship around an enclosed snippet of space, the only way you can to defend yourself is to utilise the trails of rubbish attached to the back of your craft that the game encourages you to use like a mace, swinging around to clear your surroundings. 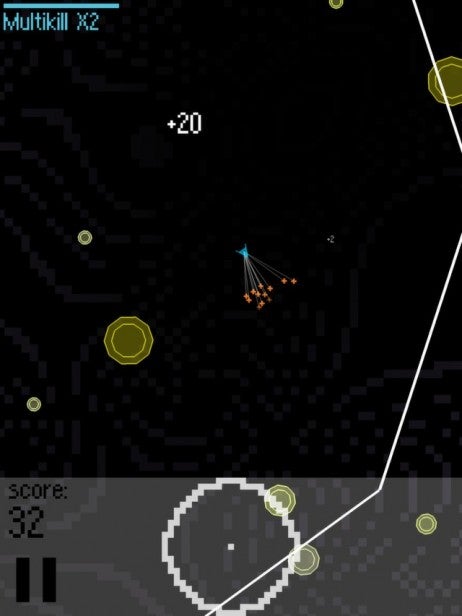 Anything your makeshift mace makes contact with is either destroyed (in the case of rival ships) or at least reduced in size, with points accumulated as a result. You then have a short window of time in which to build up a multiplier, with any additional ships you take out in a row delivering multiples of 10 points when strung together.

What makes Particle Mace especially interesting is this contrast between the game’s setting and the reality of its play. The game’s tutorial makes a big deal about your solitude: you’re the last surviving ship in the universe, and you have nothing to your name other than the fuel in your tank. However, the compact nature of the play space and the increasing number of objects in your path means that you’re anything other than alone – while your first instinct may be to avoid all your aforementioned enemies, in reality survival means ducking and diving between said elements in order to eliminate them. 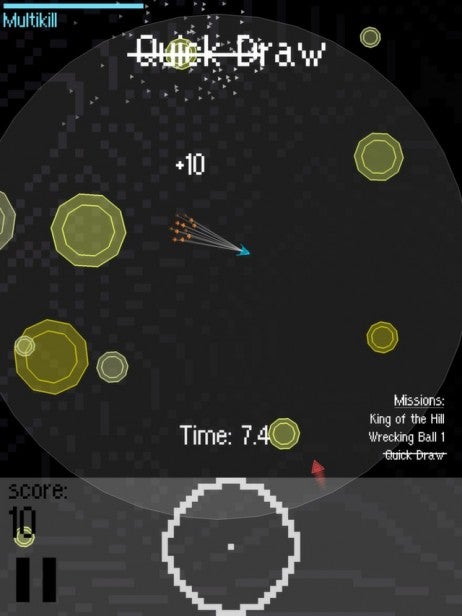 Indeed, Particle Mace is a game of dexterity. Once you build up a rhythm, it quickly becomes clear that you have to sail particularly close to the wind in order to survive. Some enemies, for instance, will fly around space in much the same manner as you, with their path especially easy to track. Others, however, are far more unpredictable, darting or spinning around space in bursts. It all means that being timid will, after an initial few kills, get you nowhere, and to string together the kind of top scores required to unlock better ships for later games, you have to fly right up to your rivals and take them out just before they do the same to you.

It’s when you start stringing together these multipliers that Particle Mace really finds its feet and play gets especially hectic, but if you fancy even more of a challenge, the game’s mission mode sees you have to unlock three achievements in one burst of play. Having to kill a set number of enemies in just a few seconds, or take out foe in a specific way all while trying to hit other goals at the same time gives Particle Mace’s mission mode an extra edge and, in retrospect, serves as a handy trainer for the main mode, giving you license to do the kind of tricks you may shy away from in the main mode, but have the confidence to come back to after mastering them taking on the game’s missions. 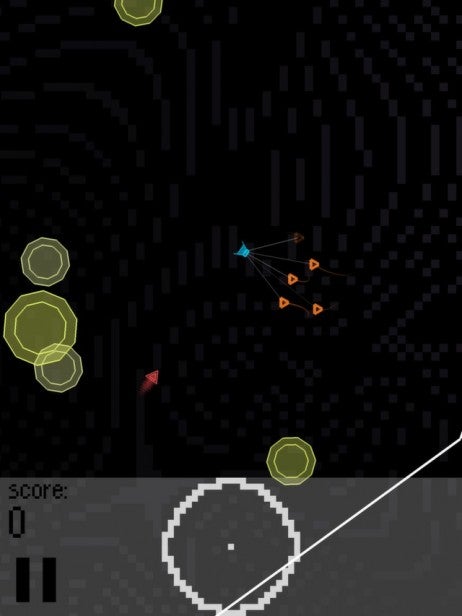 What’s more, it’s also a license to have a bit of fun, and – as a whole – Particle Mace does shy away from putting fun front and centre. It really doesn’t matter about the setting, nor does the context of the rubbish trails you use to defend yourself have a major impact, either. What it does do, however, is put an entirely different spin on what could have easily become a standard, top-down space shooter. Particle Mace, instead, feels utterly fresh despite its retro stylings and delivers the kind of experience perfect for mobile – bite sized chunks of play perfect digestible in a spare few minutes, but content enough on offer for those who fancy a little more than a snack, too.

Space, then, may not be quite as dark and empty as we like to think it is – it may in fact be teaming with life eager to engage in battle – but if Particle Mace is anything to go by, it’s little wonder everyone on earth is so keen to get up there.

Verdict
Putting a new twist on the space shooter, Particle Mace is hectic to its core, charging you with fighting off leagues of enemies without so much as a bullet to fire in your defence. However, its passive aggressive style sets it apart from the rest of the genre and the challenges packed within make sure it’ll stay on your home screen for some time to come.