The Parrot Zik 3.0 are wireless noise-cancelling headphones packed with enough tech to make the Bose QuietComfort 35 look like the equivalent of a horse and cart.

At £280, they cost a smidgen more than their Bose rivals, which were already a relatively hefty investment.

Despite packing in a number of features that aren’t included on rival models, for many they won’t prove the ultimate choice.

The wide array of features in the Parrot Zik 3.0 is the highlight here, but let’s deal with the design and comfort first. These are full-sized headphones that look very similar to the Zik 2.0, but with new embossed stitching on the cups and headband.

It’s a bold finishing touch for a headphone range that Parrot boasts is designed in collaboration with famous interior designer, Philippe Starck,

In my opinion, the stitching only serves to emphasise that the cups are in fact finished with leather-effect plastic, rather than real leather. Plus, it pulls focus away from the more sophisticated-looking parts of the Parrot Zik 3.0 design, such as the “metal bone” armature that attaches the cups to the headband. 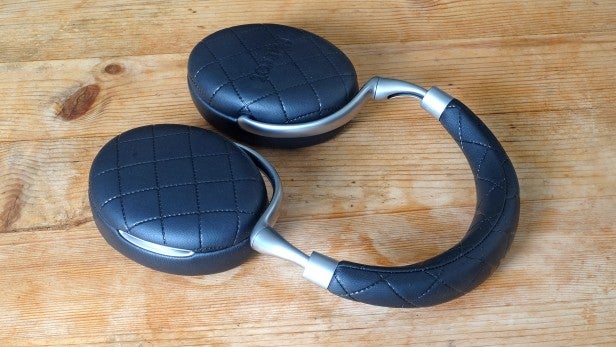 Parrot makes the Zik 3.0 available in a variety of colours including red, green and tan, but they’re not the most subtle of tones, which is why you’re seeing the black version photographed right here. I’d suggest checking out the colours in person before buying.

While I’m not in love with the look, the Parrot Zik 3.0 at least do feel well made.

Comfort-wise, they’re a little all over the place, though. The Parrot Zik 3.0 have pads that fit fairly tightly around your ears, but despite the large cups, the padding isn’t actually that thick.

With a firm headband grip, initially the headphones appear to offer a cosy bear-hug fit. While the headband doesn’t fold, it’s designed to offer enough flexibility to mould to your head automatically. However, at around the 90-minute mark they begin to cause a little discomfort around the back of the ears; after a few hours, this becomes a gnawing ache.

As a result, the Parrot Zik 3.0 are uncomfortable for long listening. The Bose QuietComfort 35 are in a completely different league. 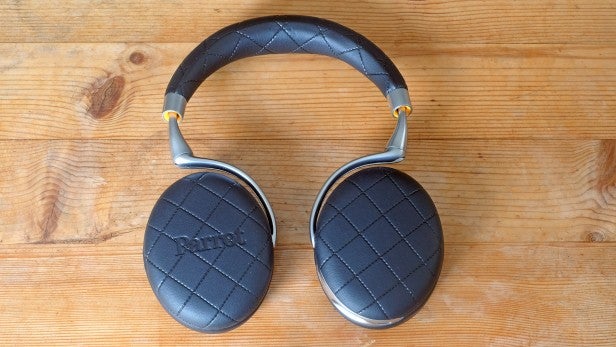 Parrot’s focus is on the tech. Starting with the basics, the Parrot Zik 3.0 are Bluetooth active noise cancellation headphones. Rather than having buttons that clutter up the sides of the headphones, the right ear cup is touch-sensitive. You tap it to play/pause, slide up and down to change volume, and flick right and left to change tracks. It’s a trick I’ve seen on other headphones, such as the ANC-equipped Sennheiser PXC 550 I reviewed recently.

There’s also a very nifty app, one that’s far trendier-looking than the average audio app. It lets you customise the EQ and – the interesting bit – view the level of the ambient noise in decibels and by how much the active noise cancellation cuts it down.

The Zik app also features reverb effects and even EQ presets “designed by” people such as La Roux and Jazzy Jeff. It feels a little like marketing nonsense to me, though: can Sébastien Tellier really perfect the sound of your new Parrot Zik 3.0? 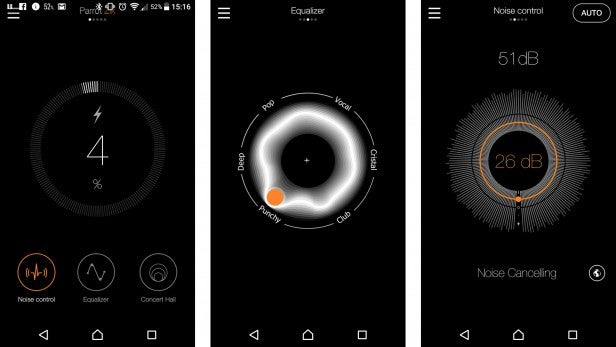 The Parrot Zik 3.0 also have NFC, pause your music automatically when you take them off (this can be disabled), and there’s a bone conduction sensor on the right pad; this is the pair of funny-looking squares with dots inside.

It’s used as a smart and unusual way to reduce wind noise during calls. Typically, there were no particularly windy days during testing, but they do handle hands-free calls well. 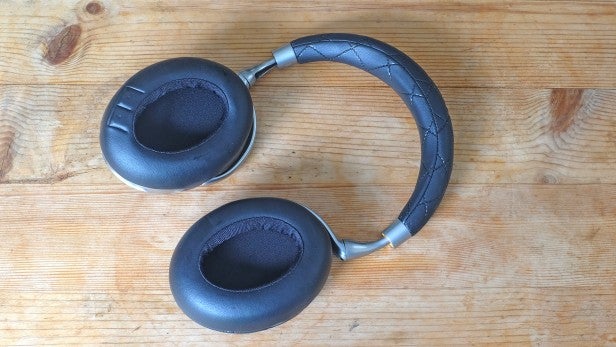 The Parrot Zik 3.0’s standard noise cancellation is solid, taking the edge off noisy environments in much the same way as the recent Sony MDR-100ABN. In my opinion, the Bose QuietComfort noise cancellation is better. However, unless you’re going to be sitting in noisy places with no audio piping through the headphones, the net effect is fairly similar. Your music/podcast/radio dominates.

Having bags of features is neat, but the overall experience with the Parrot Zik 3.0 is soured somewhat by rather poor battery life. With Bluetooth and noise cancellation switched on, the Parrot Zik 3.0 lasted only six hours between charges.

That isn’t even enough to get you through a long flight. As someone who sometimes uses headphones for up to five hours a day or more, that means I’ll have to charge this pair as often as my phone.

The battery is removable: simply pull off the left cup’s cap, which is held in place with magnets. However, you don’t get a spare in the box – and who wants to carry one around anyway? 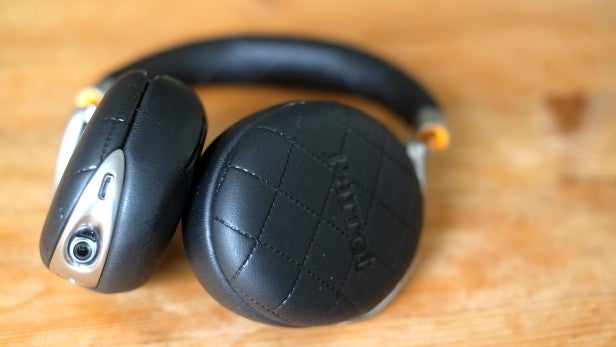 For all their tech flashiness, it’s the comfort and stamina issues that stand out day to day. However, the Parrot Zik 3.0 sound quality is at least fairly solid.

Treble is clean and clear and the bass is rich and plummy, without seeming to step over the rest of the sound. However, there are a few specific issues to point at than we found in the Bose QuietComfort 35. And they vary depending on whether the noise cancellation feature is on or off.

With it turned off, the bass is lighter. It may sound a little too light for some, but it’s actually better balanced than the slightly boosted, populist sound that you get with ANC enabled. This isn’t the issue, though. 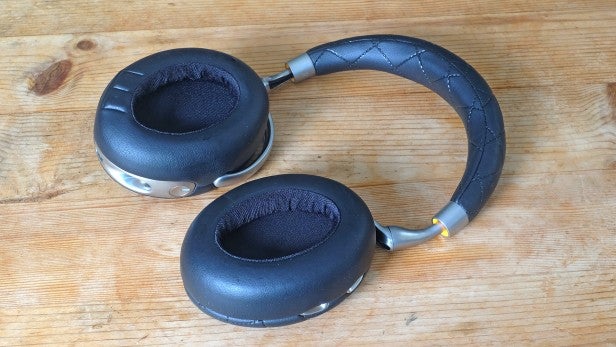 The mids are quite cold (with ANC disabled), with a slightly synthetic edge; they give Stevie Wonder’s voice a consistently “digital” sound, for example. I’ve found that this is more prominent when listening to male voices that are a little higher in the range.

The lack of aptX (despite all the other features) probably doesn’t help here. When I first used the headphones with Bluetooth, the mids actually sounded quite terrible. However, following a software update, sound quality improved. It’s the best reason to hook up the Parrot Zik 3.0 to the Zik app; any updates are transferred directly across to the headset.

Turning on ANC smoothes out the mids a little, but in doing so also wipes out some mid-range texture and detail. Since it also increases bass volume, you end up with a more “v-shaped” sound, where the bass and treble dominate and the mids are left a little emaciated.

These are good-sounding Bluetooth headphones, but the initial “hi-fi” impression left by the clean, clear treble doesn’t quite hold up to real critical listening. I also find that they start to sound a little cluttered at high volumes, the effect of distortion creeping in.

Sound quality is decent, but as is so often the case with wireless headphones, it might not blow you away in the way of a traditional wired pair of headphones at this price.

Should you buy the Parrot Zik 3.0? 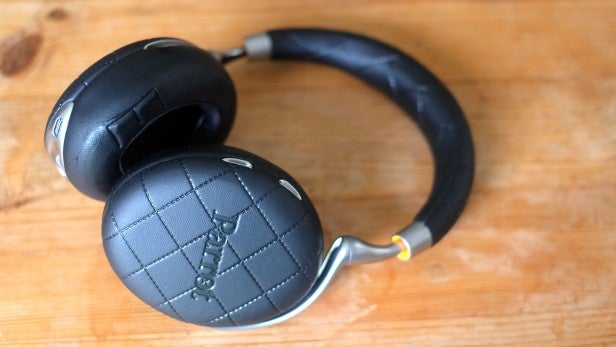 The Parrot Zik 3.0 do a decent job of one-upping a number of rivals by packing in the tech and adding a gadgety edge to what is already a very techy set of headphones.

However, some of the basics aren’t quite so inspired. Relatively poor battery life and a fit that I find flat-out uncomfortable only after a couple of hours are enough to make us suggest you consider the Bose QuietComfort 35 or Sony MDR-100ABN instead.

However, note that the sound quality, which – while not perfect – remains very solid for a wireless ANC pair of headphones.

The Parrot Zik 3.0 are feature-packed wireless headphones offering solid sound – but comfort is an issue.