What is the Parrot Mambo?

Most inexpensive miniature drones – think the no-name models you find on Amazon – typically act as a simple gateway to more full-on drone flying. They’re fun to fly around for a while, but don’t do much else. The Parrot Mambo is a bit more than your average minidrone, coming equipped with interchangeable grabber or mini-cannon accessories to open up your flight to more fun and hijinks.

While more expensive than many of the more basic minidrones out there, the Mambo’s accessories mean the fun will last that much longer – especially if you have a bunch of ’em.

Unsurprisingly, the Mambo is small and lightweight, making it perfectly suitable to flight indoors. Even with that expectation, at 63g (without its propeller guards, or ‘hulls’ as Parrot call them) it’ll still catch you off guard with how dinky it feels. 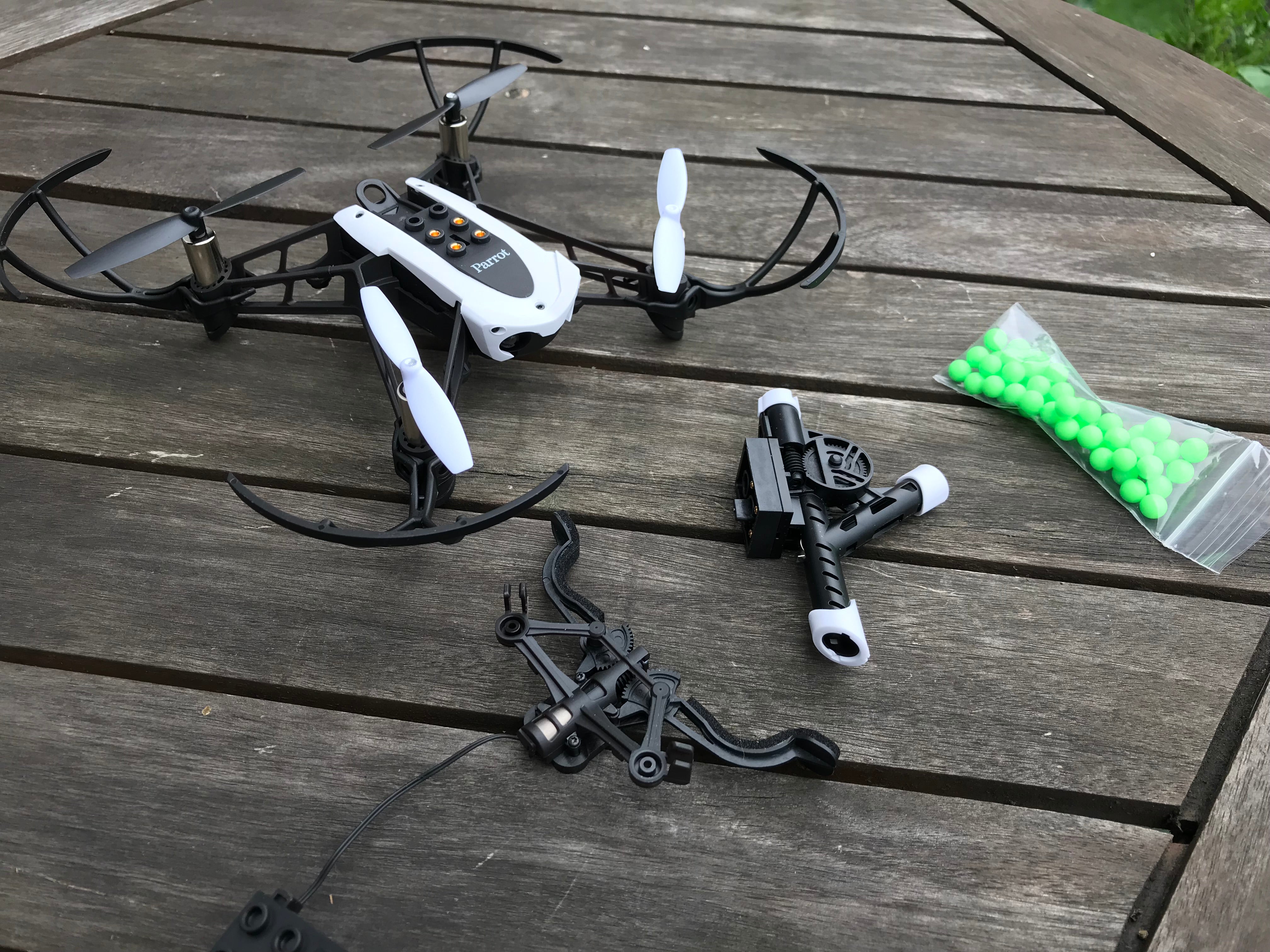 It’s a pretty standard quadcopter design and less of a departure compared to Parrot’s other Swing minidrone. The one notable element is the Lego brick-like connection on the top of the drone’s body. This is where the accessories interface with the drone.

Out of the box the Mambo is almost ready for immediate flight. The prop guards are already attached, as are the propellers. All you need to do is slide the battery into the Mambo’s main body and give it a charge through the Micro USB port on the back. 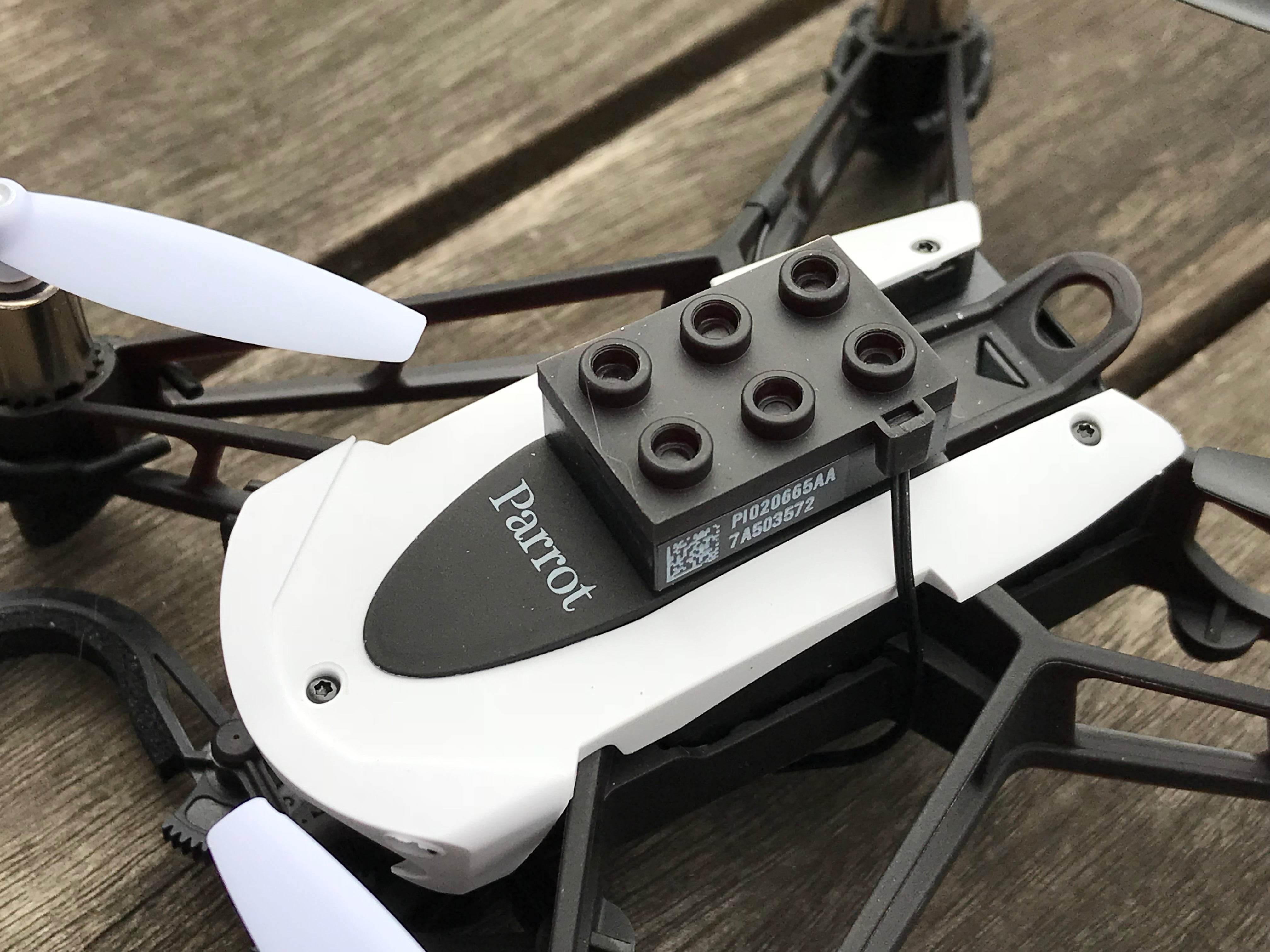 Next step is to install the Parrot FreeFlight Mini iOS or Android app on your smartphone. All of the Bluetooth pairing is done through the app, which makes it really simple. Just select your Mambo drone from the list of available drones nearby and you’re almost set.

By far the slowest part is upgrading the firmware, which took about 30 minutes to transfer over Bluetooth. The app warns you of the time required in fairness and advises doing the upgrade over USB will be quicker. Still, it gives you a bit of time to paw through the instructions and familiarise yourself with the cannon and grabber accessories tucked away in the box.

With this being an entry-level minidrone, don’t expect most of the bells and whistles of more expensive drones like Parrot’s Bebop range. Even with that said, there are 3-axis gyroscope and accelerometers inside with a downward-facing ultrasound sensor all working to make for generally stable flight.

The Mambo does infinitely better at hovering in place compared to the Star Wars Battle Drones, which always felt like you were wrestling against its natural drift in whatever direction it fancied. That is, until the Mambo encounters anything beyond the slightest of gusts. With a window open and a slight breeze coming in, it did begin to noticeably fight to adjust its altitude and position due to its light weight. Nothing too extreme but you’ll want to keep a thumb on the digital sticks lest it blows away.

Otherwise, the Parrot Mambo proves to be plenty nimble and lots of fun to fly. It tops out at a 5 metres per second flight speed, which is fast enough considering the 20m Bluetooth range when paired with a smartphone. Use the optional Flypad controller (around £40) and this goes up to 60m, but unfortunately I didn’t have one to test. 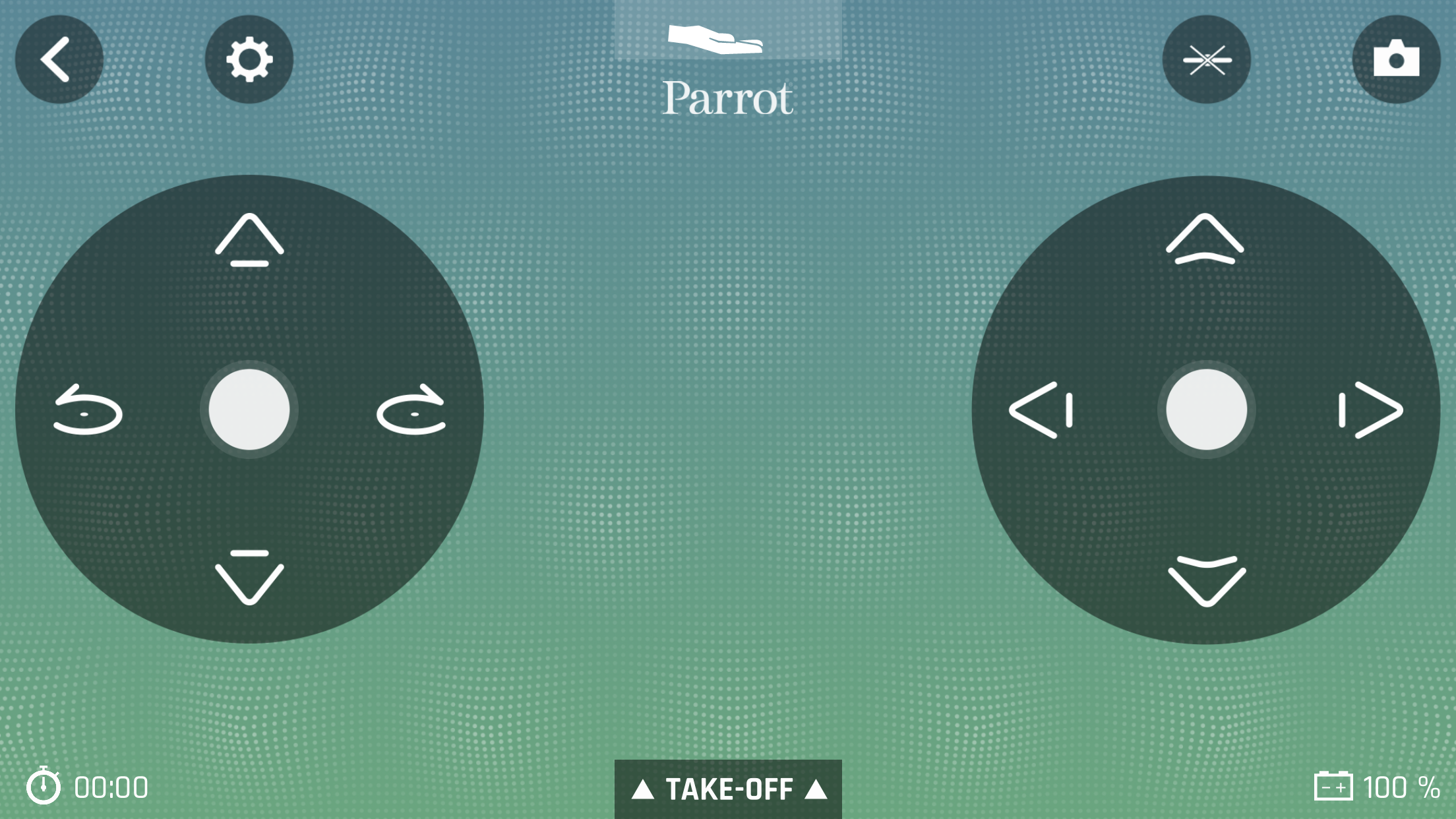 Still, the virtual sticks were responsive in the FreeFlight Mini. There’s no ‘headless’ mode, where the orientation of the drone doesn’t matter, which is more common on starter drones, but I’ve never been a fan and think it better to learn more standard drone controls.

You have access to pre-canned aerial tricks such as barrel rolls and flips with a simple press of a button. There are far more tricks on offer than were present with the Star Wars Battle Drones and they’re good fun. There’s even a fun take off mode where you simply toss the drone up from the palm of your hand to start the propellers.

Really, though, the most fun is to be had with the grabber and cannon. The grabber attaches to the bottom of the drone and connects to the top accessory interface with a cable that wraps round the drone’s body. The cannon simply attaches on top. 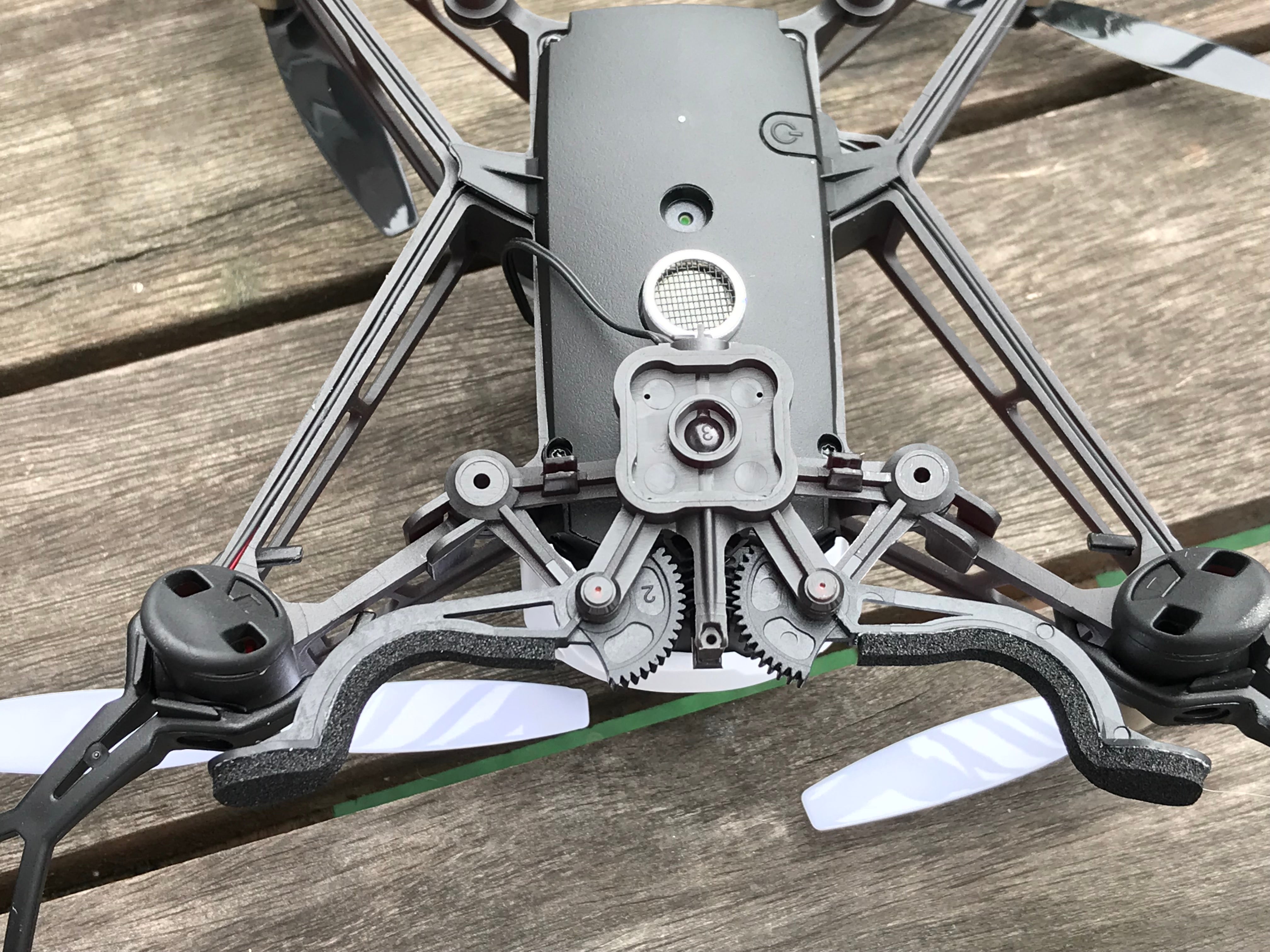 The grabber can only support the weight of around 4g, so don’t expect Amazon Drone-style deliveries. Still, you can create your own games such as attempting to drop a small ball of paper into a cup at speed (this is surprisingly difficult). Heck, if you have more than one Mambo you could probably create some sort of team sport. But even just picking up stationary objects can prove difficult.

The cannon has a clip that can hold 6 rounds. You get 50 of the green rounds, which sounds plenty. But then when you realise how small each ball is, you’ll realise why you’re given so many. These things are really, really easy to lose. There are a couple now under my fridge and behind my sofa I’ll have to dig out unless the vacuum cleaner gets to them first. The cannons aren’t shot with the most velocity so they won’t do much damage. You can still set up a carnival-style can shoot if you have lightweight targets or have an aerial dog fight with multiple Mambo drones – or just fly around and annoy your friends.

The 0.3-megapixel camera really is not great. Think an old VGA webcam level of quality and you’ll hit the mark. It’s noisy and blurry and the colours are underwhelming. Still, it can still be relatively fun to get a top-down view of your living room. 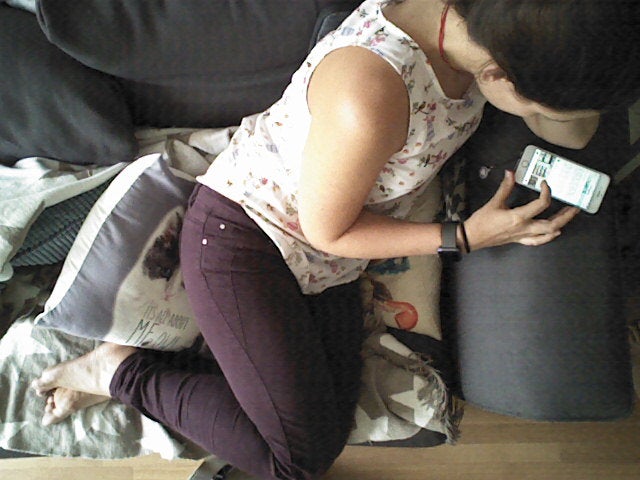 Best case scenario – no hull, no accessories – and you can expect up to 9 minutes of continuous flight. Throw in the extra weight of the hull and accessories and I found this closer to 6-7 minutes. Not amazing, but enough to have a quick round of fun. Thankfully, charging only takes 30 minutes when connected to a 2A USB adapter, which could’ve been worse.

You can pick up a spare battery for £15. I would have said it’s worth stretching to the battery plus battery charger pack (£22.99) so you can be charging a second battery while the drone is in flight – otherwise the battery needs to be attached to the drone to charge. However, Parrot says this charger dock takes 1.5 hours to charge a single battery, which negates its usefulness. I’m not sure if this is impacted by the USB adaptor you use, though.

Should I buy the Parrot Mambo? If you’re looking for a starter drone that does a little more than just fly, the Parrot Mambo is bags of fun. Really, it’s down to your imagination what you want to do with the cannon and grabber accessories. Even the very basic camera feels like a nice added bonus, even if its quality isn’t great.

Top that off with managing the basics, like enjoyable and nimble flight, and the Parrot Mambo is a fun first drone.

A fun and nimble first drone with accessories that make it stand apart from other minidrones.