What is the Parrot Hydrofoil?

The Hydrofoil is a new drone from Parrot that’s squarely designed to target the fun sector of the market.

It comes in two variants, the NewZ and the Orak. The review unit was the Orak Hydrofoil drone, which features a stealthy-looking black hull.

The small drone unit can be flown solo or placed into a support secured to the hull for on-water action. 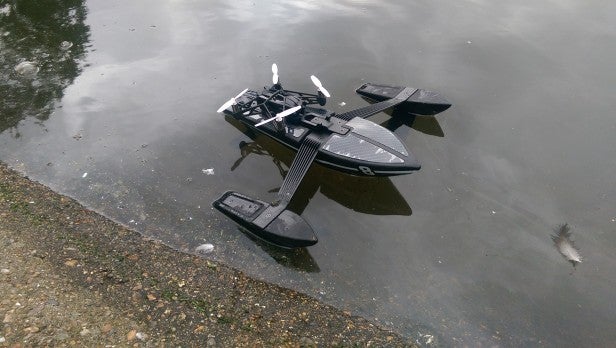 Parrot Hydrofoil – Getting stuck in

Out-of-the-box assembly takes only a few minutes. All you have to do is fix the foils to the hull and download the FreeFlight 3 app.

The end build is lightweight and fairly sturdy, although the protruding rear foils can sometimes shake loose if met with hard downward pressure.

Battery wise, plugged into the mains you’ll be fully powered up inside half an hour. Plugged into a laptop USB, however, it take three times as long – so try to opt for the former where possible.

The Hydrofoil’s battery life is short by drone standards. At full pelt I managed only about five minutes playtime on the water, and only a tad longer in flight mode.

To start, the drone sits in the support unit. Once you open up the app in your tablet or phone, you’ll auto connect via Bluetooth and the on-screen controls will pop up.

If outdoors, bear in mind that the surface of water needs to be calm – paddling pools or ponds at a push, but certainly nothing tidal. There’s no information on how the drone’s internals might be affected by H2O, but I suspect it wouldn’t be good. 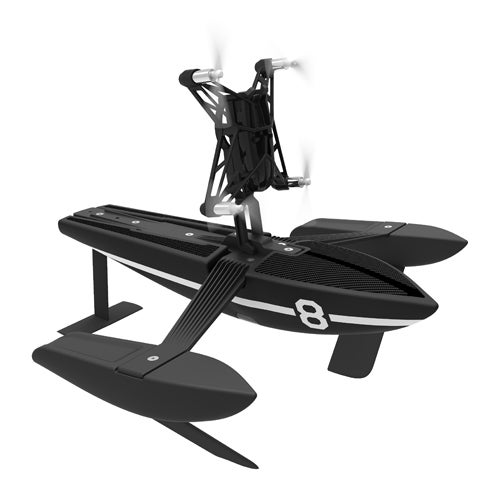 Taking to the water with a press of the “take off” instantly lifts the drone vertically 90 degrees and propels the hull. The on-screen speed and directional controls are intuitive, and within minutes I was having a ball making the drone do loops.

On paper, the Hydrofoil isn’t super-fast by drone standards. It features a maximum 10kmh speed on water, but it feels much faster and looks great.

There is an on-board camera, but it’s VGA-only and so doesn’t offer an on-screen view. You’ll have to wait to view your results.

I didn’t manage to capture any fleeing pond dwellers – but did strike up a drone-based dialogue with strangers.

Parrot Hydrofoil – In the Air

With such a huge selection of four-rotor flying machines available at present, I expected very little from this palm-sized flyer. Aside from a battery life that could be improved, the actual flying time you get with the Hydrofoil is particularly enjoyable.

You use the on-screen joystick-style pads to control height, speed and direction. One slight issue is that it does lag a little, so you need to ensure enough open space when taking the drone for a spin.

In-air tricks are accessed in an on-screen menu. In general I found these were great; the quick 90- or 180-degree turn options worked a treat. However, the full 360-degree flip drained all my battery life. 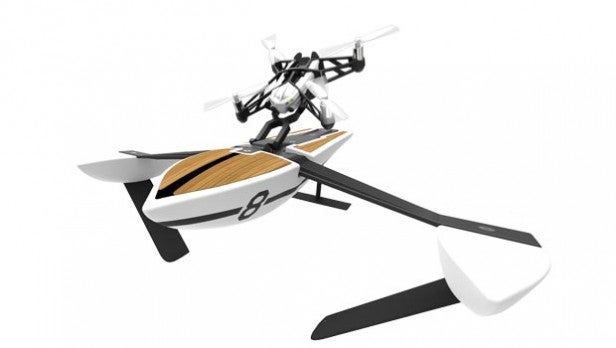 Should I buy the Hydrofoil?

Although you’ll need fairly tame conditions in which to fully exploit what the Hydrofoil has to offer, the drone is still great fun to play with.

The battery life and price point might cause some to hover over the “buy” button; there’s no doubting it’s a considered purchase since it will be used intermittently to reach its full potential.

That said, the Hydrofoil isn’t a professional drone and true enthusiasts will definitely be left wanting more.

The Hydrofoil is great for entertainment, but lacks the key features that true drone enthusiasts wouldn’t want to be without.