Parrot + product = product with Bluetooth. That’s the raison d’etre of Parrot, pure and simple. Best known for its variety of Bluetooth headsets and hands free kits, the company has increasingly found ways to branch out into other areas such as photo viewers and speakers – all with Bluetooth, naturally.


These forays have borne mixed results so far, but that hasn’t stopped Parrot from trying again with its BOOMBOX – capitalised presumably for extra BOOM! The design is reminiscent of the Apple iPod Hi-Fi which we reviewed almost a year ago, though in reality there’s a good deal that separates them. 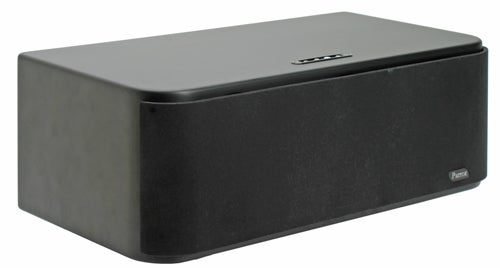 To begin with the Boombox is noticeably larger, with a far deeper casing while it lacks any kind of portable power option – making the ‘boombox’ title a tad misleading. There’s also no iPod dock, though there is an RCA auxiliary line-in and a 3.5mm to RCA cable for a wired connection to a player.


Of course the selling point is the Bluetooth connectivity, making it possible to use Bluetooth enabled phones, MP3 players and other devices to stream music to the Boombox wirelessly. It’s worth noting you can’t use any old Bluetooth device though, whatever you use must support the Advanced Audio Distribution Profile (A2DP); a list of A2DP compliant devices can be found here. 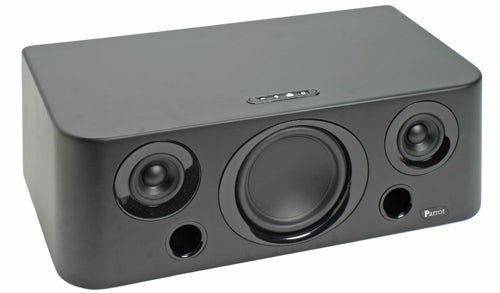 Measuring 430 x 225 x 150mm and weighing in at a meaty 5.6 kg, initially the Boombox looks fairly anonymous. On closer inspection, however, it’s easier to appreciate the clean lines, the lacquered wood casing and semi-matt finish that combine to create a stylish and understated look.


The front is protected by a magnetically attached guard, but removing it reveals the three drivers – two wideband, one sub – each surrounded by smart, shiny black plastic. With these in full view the Boombox looks considerably better looking, with the symmetry created proving quite pleasing to the eye. 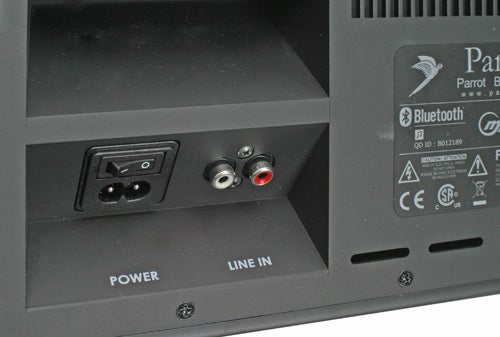 As is the beauty of Bluetooth it’s fairly simple to pair devices with the Boombox, provided said device supports the aforementioned profile. Once your device and the Boombox have found each other all you need do is enter ‘0000’ as the pin and you’re your ready to make sweet, sweet music.


Unfortunately, we found that the Bluetooth range wasn’t as impressive as we would have hoped. Audio began to cut out at five metres using a Sony K800i, though when closer there were no appreciable problems. This makes streaming music from a PC in another room unlikely, though for all other scenarios it’s no great hardship.

To test the overall sound quality of the Boombox we used a variety of devices, including a mobile phone connected via Bluetooth, an iPod via the line-in and a PC using the line-in. And, overall, one can’t help but be impressed by the Parrot Boombox.


The Boombox sounded far warmer and clearer compared to the muddier iPod Hi-Fi, while pushing the volume higher also resulted in impressive results with the 60W digital amplifier reducing the level of distortion. Using Bluetooth the quality was very decent too, with minor compression on the high-range the only noticeable problem and the overall clarity was more than sufficient for casual listening.


High and mid-range clarity was excellent, and the Boombox produced a nicely balanced sound. Bass, though always warm and well defined, did a lack a little punch but for speakers such as these that’s no great surprise and isn’t a source of real complaint.

Moreover, when you compare the Boombox to its alternatives it comes out well. The £150 price is a good one, wedging it between the iPod Hi-Fi and the Acoustic Authority iPod Speaker Dock, which we still consider to be an excellent buy especially now they’re available for as little as £81. What they both lack, however, is Bluetooth, and this feature puts the Boombox in a privileged position providing easier connectivity to phones and other Bluetooth enabled devices.


If you use your phone as an MP3 player and want something to play your music on then the Parrot Boombox is an excellent option. Sound quality was excellent, besting the iPod Hi-Fi comfortably with little loss of quality when streaming via Bluetooth. The only caveat is the slightly disappointing Bluetooth range, though this will only affect you if you plan on streaming music from another room. Otherwise it’s a smart, stylish and great sounding addition to your living room.