PaRappa The Rapper is a game worth celebrating. Originally released on the PlayStation 20 years ago, it was both a pioneer of the rhythm action genre and one of the first games to demonstrate that titles could take on offbeat characters and left-field visual styles and still make an impact.

You can see its influence not just in music games such as Rock Band but in modern indie hits, stylised 2D platformers and a whole range of games with quirky stars. It’s a groundbreaking classic that deserves its place in gaming’s hall of fame. I’m just not sure that this is the best way to celebrate it.

If you’ve never played PaRappa, it’s a hip-hop adventure featuring a small, beanie-hatted rapping dog. PaRappa is a daydreamer, hopelessly in love with a cool girl sunflower but lacking the means to win her heart. His only hope? To rap his way through a series of increasingly bizarre situations, each one taking him one step further on the trail towards true love.

A kung-fu master onion teaches him how to defend the cool girl sunflower from bullies and stand up like a man. A hard-assed moose driving instructor helps him learn to drive so he can take her far away. A cooking chicken teaches our canine hero to cook her the perfect birthday cake. PaRappa The Rapper is just that kind of game. 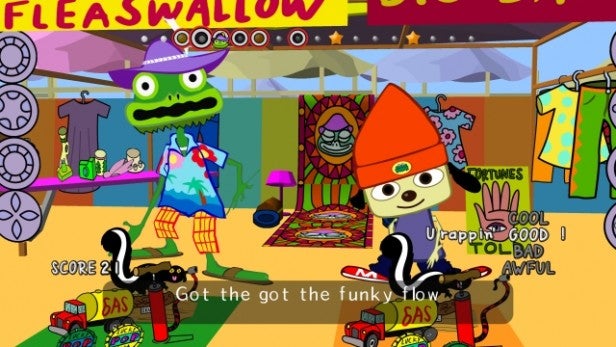 What this actually involves is following each teacher’s lead, line by line, through their rap, using the four face buttons, L1 and R1 to say the right word or phrase as indicated by a line of symbols at the top of the screen. Hit the right buttons with the right rhythm and, as the game says, “U-rappin cool”. Drop the beat or keep hitting the wrong buttons, and you’ll be failed and asked to repeat.

The songs are brilliant, each one packed with funny rhymes, sly rap in-jokes and bizarre non-sequiturs, helped by the fact that each of your teachers is, in some little way, out of their mind. The beautiful cartoon art-style, designed by artist Rodney Greenblat, hasn’t dated at all, and the remaster makes the most of the move to 1080p on PS4 and 2160p on PS4 Pro.

Watch someone else playing and notice the details; the way the game feeds information back to the player through changes in the audio, with certain tracks fading out when you’re performing badly and back in when you’re in the groove.

Check out how the action on the screen also changes, as Chop Chop Master Onion’s pupils go crazy in the background and the dojo’s floorboards flip up, or Cheap Cheap the Chicken grows steadily more red-faced and furious as you struggle to follow her rap. These ideas would eventually drip into Rock Band and Guitar Hero, but PaRappa makes them feel like part of a bonkers, lovable, surreal work of art. 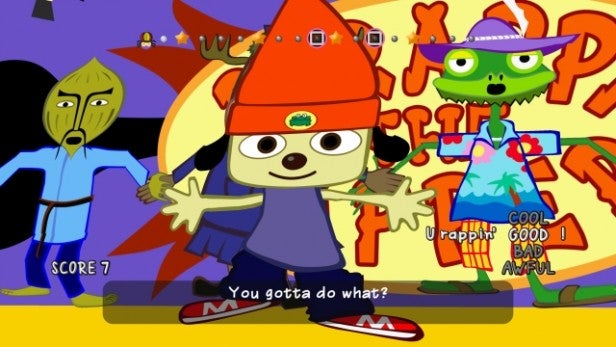 If only the gameplay had worn so well. On the one hand, it’s very simple; just tap the right key at the right time, then throw in the occasional grace note to see if you can push up your rating to “U rappin cool”. On the other, it’s oddly confusing, because there’s something off or fuzzy about the timing and how PaRappa and the game responds.

This wouldn’t be a worry, but for a cute game about a hip-hop-crazy pup, PaRappa The Rapper can be incredibly unforgiving, dropping you down the ratings and even failing you for what seem like minor mistakes.

Once upon a time, it seemed it had to be that way. PaRappa was always a short game with just six tracks to get through, and if it wasn’t even vaguely challenging you’d swan through the lot in less than an hour.

That’s still the case today. Even remixed tracks won’t prolong the experience – particularly as, say, the experience of rapping through Prince Fleaswallor’s market stall to a surf version of his song isn’t that different from rapping through the reggae-tinged original version. What you’re left with, however, is a game where you wish the whole lasted longer, but certain parts would take a running jump.

In my case, I spent an hour struggling through Cheap Cheap’s baking tutorial, unable to get the rhythms right but not quite sure where I was going wrong, as my phrasing on the soundtrack sounded spot-on. Even now I can’t hear the words ‘Every single day, stress comes in every way, I ain’t got no time for nobody…’ without starting to shake. I hate that chicken more than I hate Hino-Enma in Nioh – which is quite amazing, when you think about it. 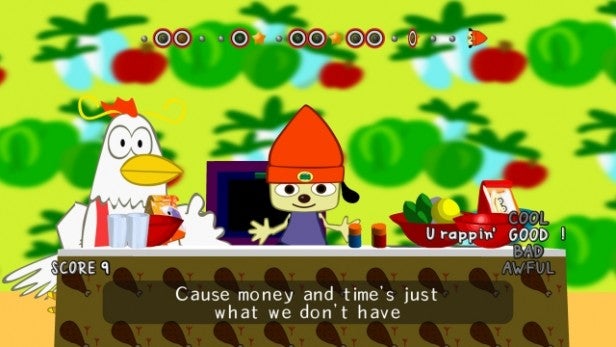 Excessively tight timing requirements? Problems caused by delays in the sound or picture processing? I tried everything from switching the TV’s game mode in and out to playing through headphones, soundbar and the TV speakers. Even new vibration and visual feedback indicators didn’t really help.

In the end, nothing worked until I somehow fluked my way through. Some kind of Rock Band-style calibration feature wouldn’t have gone amiss.

What this all comes down to is that PaRappa The Rapper is still an amazing game to look at, but not such an amazing game to play. What it needed wasn’t so much a Remaster as a remake, with the old songs reworked with revamped gameplay, plus new ones added in an expanded storyline.

Even bringing in the sequels, PaRappa 2 and UmJammer Lammy, would have made for a more attractive proposition. What’s more, the failure to redo the cut-scenes to match the upscaled visuals, leaving you with the old ones running in their low-res glory in a window, just seems cheap and a huge schoolboy error.

I love PaRappa and his ‘I gotta believe’ attitude, but this early rhythm action game no longer holds up. That’s no slur on its charming visuals, great music and superb animation, all of which look great in this HD update, but the gameplay just doesn’t really work. Enjoy PaRappa in your memories or on YouTube if you must, but this remaster will leave you thinking bad of the rapping pup and, really, who wants that?