Exclusive to Nintendo Wii U
Nintendo might have all but abandoned the Wii U, but it’s hard to feel sore when it’s still releasing gems such as Paper Mario: Color Splash (apologies for the spelling. It’s Nintendo’s choice, not ours).

The debut of the Paper Mario series on the console, it’s every bit as eccentric and entertaining as its Wii and 3DS predecessors, not to mention last year’s crossover title, Mario & Luigi: Paper Jam. Its blend of adventure, puzzling and RPG lite combat won’t be to everyone’s taste, but get used to the flavour and you won’t look back.

If you’ve never been introduced to the Paper Mario universe before, it’s one where the characters and locations you know from the regular Mario games have taken on a strange 2D paper form. Everything seems to be fashioned from paper, card or, at most, thick cardboard, and Mario and chums wander around 3D and pseudo-2D landscapes, revealing flat sides and thin edges every time they turn. It’s an odd but brilliant effect. 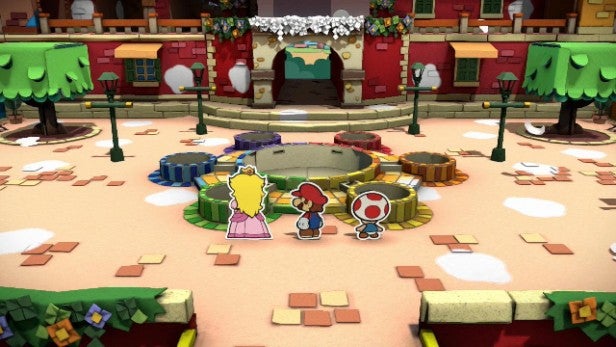 Nor is it the first or last you’ll see here. Once again, la famille de Bowser and its evil forces are up to no good, sending Shy Guys armed with straws to suck the colour from a new island in the middle of the Paper Mario world. They’ve terrified the native toads (the little mushroom people), flattened or drained the pigment from the unlucky ones, and created patches of gloomy grey nearly everywhere you look.

But is Mario going to take this lying down? Of course not. Armed with a magic paint-splashing hammer, he’s going to smash some colour back into the extended universe and whack some sense into the Bowsers’ masked minions.

Hit something with the hammer and it’s covered in a great glob of paint (leaving you wondering whether Nintendo borrowed the gungy fluid rendering technology from Splatoon). Drained toads spring back to life while dull, grey patches get their natural colours back. You’ll even find doors that only open and platforms that only move once their normal hues have been returned. 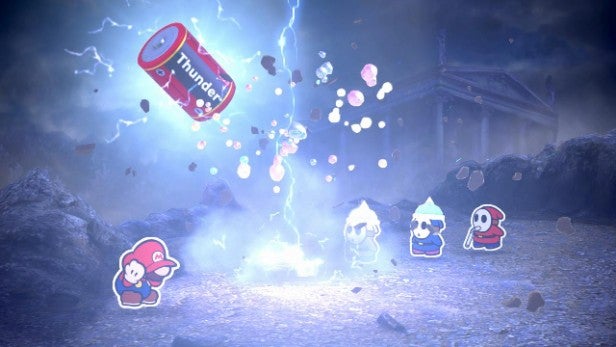 All those Shy Guys and assorted goons require a slightly different approach. As in some of the previous Paper Mario games combat is RPG-style and turn-based, relying here on a selection of cards bearing different jump, hammer and summoning attacks. You pick a card each turn, colour it using your paint supplies then play it, with a nod to Mario’s platforming heritage in bonus damage, or a follow-on attack if you tap the A button at the right time during the run-up.

Some attacks affect just one enemy, while others will take down a couple of Koopa turtles or colour-sucking Shy Guys. Meanwhile, other cards heal you, summon in former foes to battle for you, or even give you a temporary defence against incoming blows.

We won’t pretend that the combat is that deep or that tactical, but it’s strong enough to hold your interest, especially once you earn the ability to deal more cards per turn then find and “squeeze” special objects into card form, giving you a fan that literally blows your foes away – or a plunger they won’t want to mess with.

To make things tougher, your supplies of paint – needed to power-up many of the cards – are limited, while you can easily run out of cards as you make your way through the level. There are ways around both. You can smack paint from some objects, find cards in golden blocks, or cough up coins for a random card once every turn. However, you’ll still have to learn when to use your best cards and when to save them for more challenging opponents. 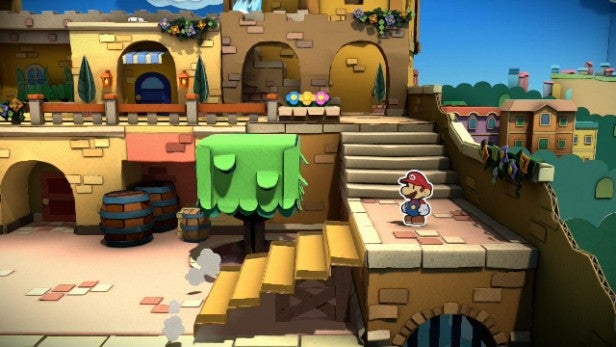 The real meat of the gameplay, though, is in exploring the different areas and solving the puzzles that hold back your progress. Sometimes these come down to eliminating an enemy or filling grey patches with colour, but you’ll also be asked to track down missing rescue toads, stretch and stick bridging strips of paper, or find a way to reach an unreachable high spot.

Color Splash also finds a fun way to use the Wii U Pad’s touchscreen. In certain areas, tapping the Y button will reveal a dotted line. Find the exact right position, tap again and you can use the touchscreen to snip away with scissors at the scenery, creating a new route for Mario to move along or a patch where you can stick a useful card. It’s just an example of how Nintendo finds ways to make the whole “paper” paradigm power smart, imaginative gameplay.

And imagination, along with fun, is a keyword here. Those bright, vibrant papercraft visuals are brimming with personality. The script is whip-smart and genuinely funny, crammed with in-jokes about the wider Mario world, gaming subcultures and more.

It’s a challenge not to love a game where a Toad would-be superhero needs you to find his missing clothes so that he can use his awesome powers of selective memory to forget the whole humiliating episode, or where enemies on the TV screen dish out jibes when they think you might be looking at the Wii U Pad, not them. It’s a good sign that I’ve had an audience watching me play much of Paper Mario and joining in the fun – something that doesn’t happen much with more spectacular blockbuster games. 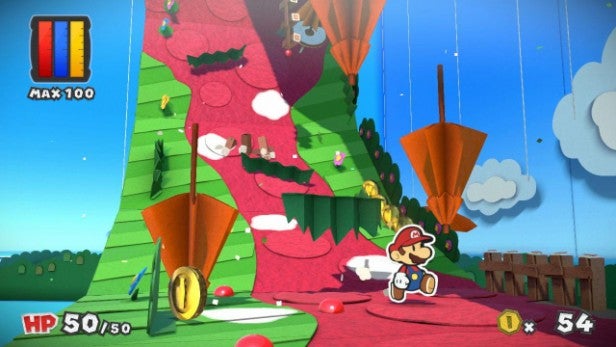 Not that it’s short on spectacle, either. Color Splash is happy to twist and fold its papercraft worlds, giving you moments of real bonkers brilliance. And just when you think it’s settled into a rut, it throws in a scene that has you mouthing “what the…..”

While it has its predictable sections, you can never quite tell what might happen next. Big shout outs for the music, too, which flits between a range of jazz and ragtime styles that draw you in to the whole jolly atmosphere. It’s the sort of game that makes you smile.

None of this makes Color Splash a masterpiece. It still feels lightweight and a little repetitive, while you’ll sometimes find your progress stymied by something small that you failed to notice – something even generous in-game advice from a talking paintpot can’t entirely fix.

After a while, the approach to combat feels a little long-winded, although you can amalgamate some stages if you choose. Yet it’s very hard to grumble. This is a big, generous and warm-hearted game that works both as a treat for Mario fans and as a brilliant, family-friendly RPG.

Verdict
It won’t do much for those crying out for a proper Mario adventure on Wii U, but Paper Mario: Color Splash is a lively cocktail of Mario, RPG and papercraft puzzle-solving with funny dialogue and a surreal, self-aware sense of humour. It won’t be for everyone, but it’s a great game for those who get its lovable oddball vibe.