Panasonic’s recent move into the consumer IP network surveillance market has met with considerable success thanks to its diminutive BL-C10 and BB-HCM311, delivering a fine range of features for the price. We now move up to its professional products and take a look at the WV-NP472E, which delivers some interesting alternatives albeit with a substantial price hike.


The first point to clarify is that this is not by any means a brand new product. It has been languishing in Panasonic’s camera family for a couple of years but finally benefits from some improvements to video delivery and image quality. The camera is specifically aimed at 24-hour surveillance and is one of few products at this level to come with both digital and analogue feeds. The camera also accepts a variety of lenses and Panasonic offers high-speed, powered remote zoom, auto-iris and auto-focus varieties. For this review we were supplied with the WV-LZA61/2 vari-focal lens, which is included in the price listed. 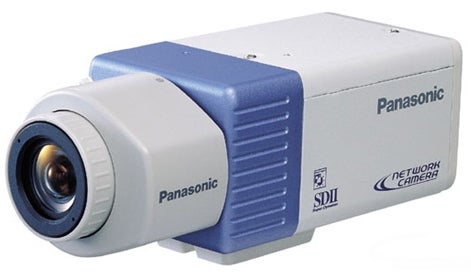 The camera offers a good specification that centres on a 1/3in Panasonic CCD sensor that’s capable of delivering a maximum resolution of 752 x 568 pixels. It functions well in low light conditions and will switch from colour to mono modes when light levels drop below 0.8lux. It can continue to provide a picture right down to 0.1lux so should work in areas such as car parks with security lighting or just general street lights. Build quality of the camera body is reassuringly solid and the lenses are easily screwed in and removed from the front. The vari-focal lens is powered by the camera and its cable is plugged into a receptacle on the side of the main body. At the rear you have a standard Fast Ethernet port and this is accompanied by a BNC composite analogue video output for connection using co-axial cable.


An I/O connector block is also provided and adds some interesting possibilities to your surveillance scenarios. The analogue socket will more than likely be connected to a standard video recorder where you could run 24-hour recording is you wished. However, by connecting an alarm or door sensor to the input on the I/O block you could use this to trigger the output to switch on a recorder. There’s also a day/night input where you can use an optical switch to force the camera to swap modes as the light levels change.

No discovery utilities are provided so you need to point a web browser at the unit’s default IP address to get started. The interface hasn’t seen any graphical refreshment since its introduction a couple of years ago and now looks quite dull, although it is simple enough to use. There are two setup menus with the main one offering access to the camera’s network settings, image controls and other areas such as the FTP client for downloading images to an FTP server. The camera originally only supported JPEG compression but this has now been augmented with Motion JPEG as well. The former is a real pain to use as the camera simply fires off an image depending on the frequency set in the image controls. You can choose from Fast to Very Slow with refresh rates ranging from around 6fps down to once every three seconds. We weren’t impressed with the delivery method as each web page update results in a constantly flashing cursor. We also had to deselect IE’s status bar as this displayed a message at every update. Motion JPEG only supports Internet Explorer and also requires the supplied plug-in to be installed. It does result in a much smoother image playback and although Panasonic doesn’t quote a speed we would estimate it to be only around 20fps.


Moving to the camera setup page enables you to overlay all menu commands on the live view image. This is because the menu can be accessed from the camera’s manual controls by sliding back a small panel on the side of the body and revealing six buttons for local access. However, functions such as motion detection setup can only be accessed from here. 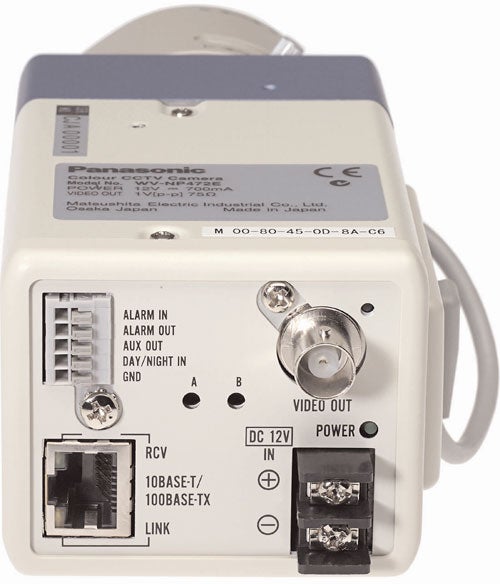 Overall, the image quality for a camera costing over £700 is above average. You’ll need to fiddle with the manual focus puller and this can result in a sharp image with good overall colour balance. We also found that it functioned well in very low light levels and can deliver a clear image under street lighting conditions. However, as you can see from the screenshots, quality isn’t quite as good as that offered by the Axis 221 Day and Night Camera. It’s also worth noting that for less money the 221 also offers support for a whopping 60fps, PoE, Motion JPEG and MPEG-4 compression, making this a far better choice for professional quality video surveillance


The main appeal of this network camera is the digital and analogue feeds, which can be used simultaneously and the option to fit different lenses. Picture quality under a variety of lighting conditions is generally good but at this price, the level of features can’t match the competition 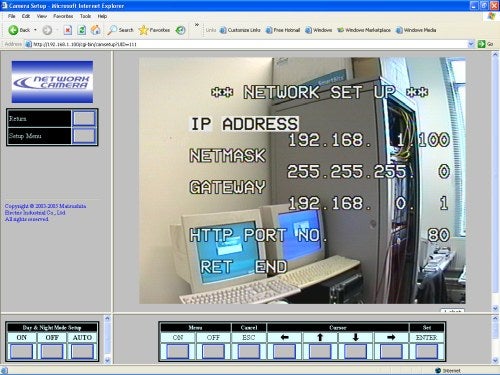 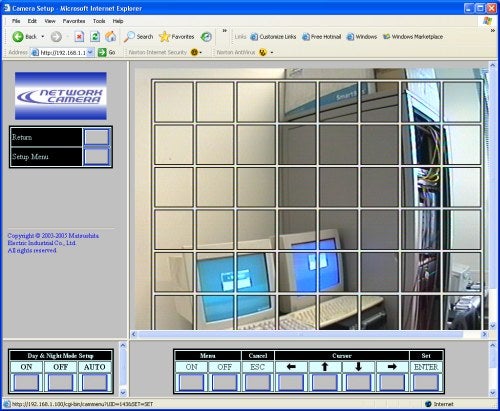 Motion detection is more fiddly to set up as you need to use the camera’s own menu for this. 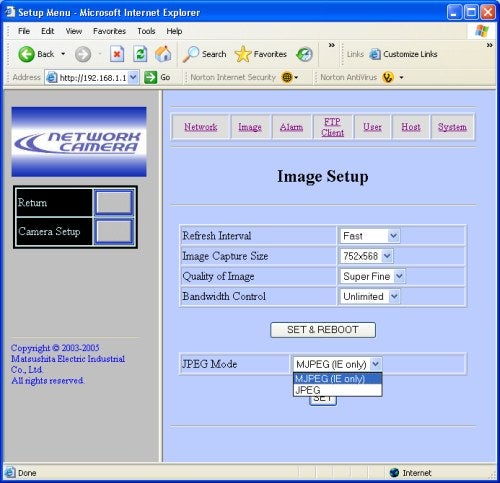 Panasonic finally adds Motion JPEG support and this option can be accessed from the main web interface. 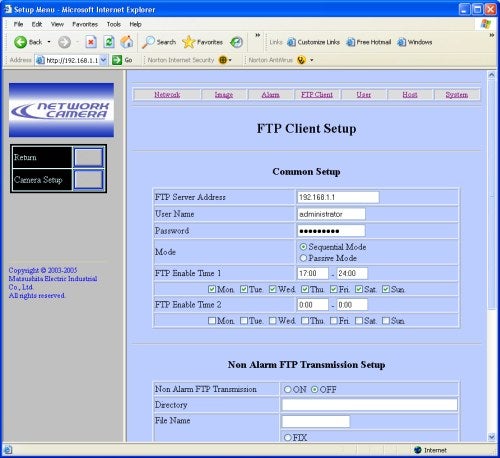 The camera can function as an FTP client allowing it to download images to a server when an alarm is tripped.