We wouldn’t go quite so far as to say that Panasonic’s faith in its beloved plasma technology is wavering, but it’s certainly true that the brand suddenly seems to have got very serious indeed about boosting its LCD story.

Take for instance the new WT50 flagship series from Panasonic’s 2012 LCD range, unveiled at the latest Consumer Electronics Show. For starters, the WT50 is one of the best-looking LCD TVs we’ve seen to date – so much so that it finally allows Panasonic to challenge the aesthetic televisual glories offered by the likes of Samsung and LG. 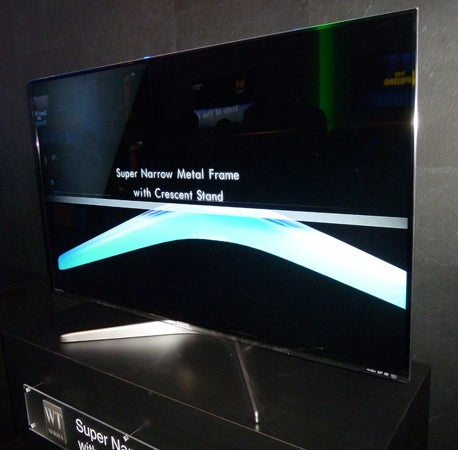 The WT50’s metal bezel is phenomenally slim, for instance – barely a cm across. The black and silver finish of the bezel is very pleasant too, and there’s some fashionable use of a see-through ‘trim’ along the bottom edge – complete with an illuminated Panasonic logo.

As you would expect from the slenderness of its bezel, the WT50 uses edge LED lighting. The set is also an IPS LED design, meaning its viewing angle is noticeably wider than that of most LCD TVs. Its also claimed to deliver a full 1920 lines of motion resolution, avoiding LCD’s tendency to blur when showing moving objects.

Black level response, meanwhile, should benefit from a new 8-phase backlight scanning system, and the amount of picture controls on offer is so high that the set has bagged the approval of the Imaging Science Foundation (ISF). 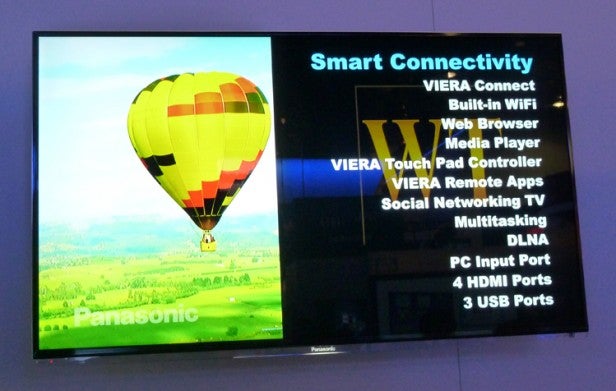 The WT50 also supports active 3D playback, with a 2D to 3D conversion system, along with Panasonic’s new SmartViera platform – a combination of online services, green features and picture processing functionality. Also, extremely coolly, SmartViera supports push-pull video functionality with Apple and Android devices, so you can ‘send’ pictures from the TV to your personal video devices, or vice versa.

You even get a free ‘touch pad’ remote control with the WT50 alongside a more conventional effort. 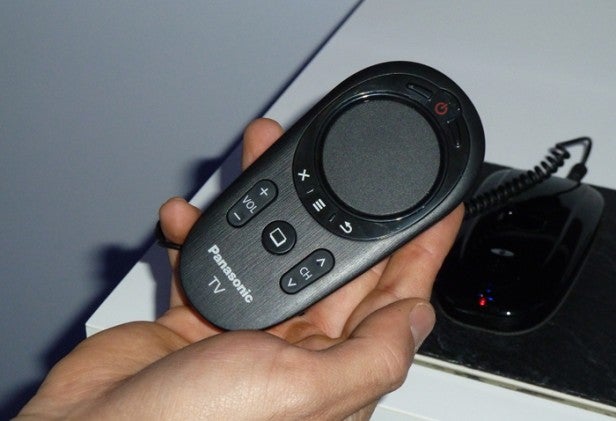 Although it’s hard to get an absolutely definitive handle on a TV’s picture quality under show-floor conditions, it seemed to us over the course of nearly an hour spent with the WT50 before the main doors opened to day one of the CES show (God bless exhibitor passes!!) that it was a huge improvement over anything LCD-flavoured that Panasonic has delivered before.

Colours are superb too, with a level of dynamism that goes beyond anything witnessed to date from Panasonic’s preferred plasma technology, as well as an excellent colour gamut and some exceptionally fine colour blends.

Pictures look explosively bright too, even in the harsh environment of the CES, and motion looks outstanding, with seemingly no blurring or judder at all. 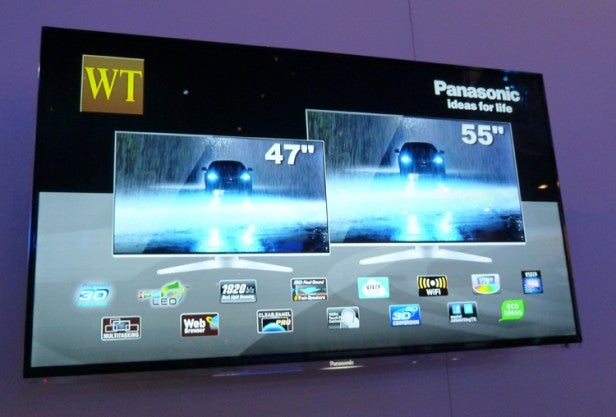 The WT50 also picks up where Panasonic’s 3D LCD TVs left off last year, by suffering impressively little crosstalk. Many other brands at the CES have improved their 3D crosstalk efforts too, but the WT50 still seemed a step ahead of its LCD rivals. We also noticed with 3D that pictures didn’t seem as heavily dimmed this year when wearing Panasonic’s 3D glasses.

The only issues we could see with the WT50’s pictures during our first look at the 47in model were some very slight light ‘haloing’ around very bright objects, and what appears to be a rather reflective screen.

The WT50’s impressive picture showing was ultimately overshadowed during the CES by the astounding efforts of LG and Samsung’s OLED TVs. But making comparisons with those showstoppers is hardly fair, of course, given that the WT50 TVs will actually be something you don’t have to be rich to afford!

In fact, we came away from our time with the WT50 feeling more excited than we ever have before about a Panasonic LCD TV. It arguably made even more impact on us than any of Panasonic’s new plasma models – though it’s entirely possible/likely that the plasmas will reassert themselves once unleashed in a more domestic situation than the CES halls…