Blimey, the P65VT20 is big. Clearly, you get a vague sense of its impressiveness from just reading on paper that it measures 65in diagonally, but nothing can prepare you for the true immenseness you’re faced with when you and at least one other person have hoiked the P65VT20 into its viewing position.


This is especially true in the P65VT20’s case because its 65in of screen is housed within a really quite wide and chunky bezel by today’s generally svelte standards. 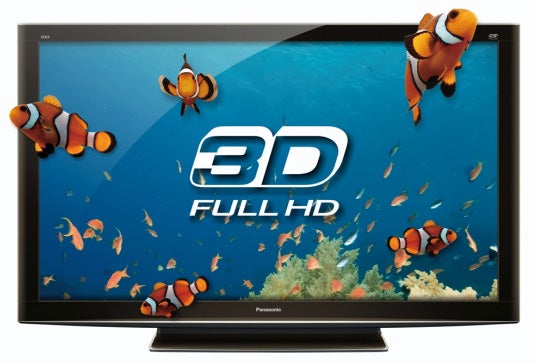 Panasonic has tried to make this slightly dated-looking hunk of chassis a bit more modern by making it an unusual bronzey brown colour. But although the build quality is very good, this brown effect still feels a bit like sticking fake tan on a chav, if we were to be really harsh about it.


For starters, of course, it’s equipped with Panasonic’s 3D technology. And we’re not talking about the stripped down passive stuff found on LG’s 47LD950 last week. The P65VT20 is full HD, active 3D all the way – even thoughtfully shipping with a couple of pairs of active shutter glasses to get you on your 3D way.

It’s 3D nature also means the P65VT20 gets Panasonic’s new technology for reducing the decay time of each plasma cell – something deemed necessary to reduce the occurrence of crosstalk (double ghosting) that can occur with 3D pictures.


This key bit of panel tech is backed up, as you’d expect, by the latest version of Panasonic’s impressive NeoPDP system, which has seen Panasonic develop an almost completely new plasma cell structure to improve the contrast, colour and clarity of its premium TVs’ pictures.


This is all food for hope with the P65VT20, with more sustenance coming courtesy of the quite impressive array of calibration tools Panasonic has seen fit to build into the TV’s menus. We’ve had cause in the past to criticise Panasonic for its reluctance to offer things like gamma controls and colour management systems on its TVs, but it doesn’t hold back here – a fact that’s helped it bag an endorsement from the Imaging Science Foundation (ISF).


Another third-party willing to lend its name to the P65VT20 is THX, which has got involved to the extent of including a calibrated picture preset that really does a great job of getting the best out of the TV for movie viewing.

Panasonic is the only brand this year offering dual Freeview HD and Freesat HD tuners in some of its TVs, and not surprisingly given its flagship status, both tuners are present and correct in the P65VT20.


While Freesat has certainly become much less interesting than it used to be now that Freeview HD is live, the fact remains that large parts of the country still can’t receive Freeview HD broadcasts. So for this year at least, there’s still a good argument for Panasonic’s inclusive free HD broadcasting approach.


This finds an LNB input sitting alongside the more predictable RF input, as well as an Ethernet socket as required on any TV that has an HD tuner.


The Ethernet’s usefulness doesn’t stop at merely opening the door to potential future interactive HD broadcast services, though. For it can also be used to hook up with a DLNA PC for multimedia file playback, or it can take the TV online to Panasonic’s ring-fenced Viera Cast service. 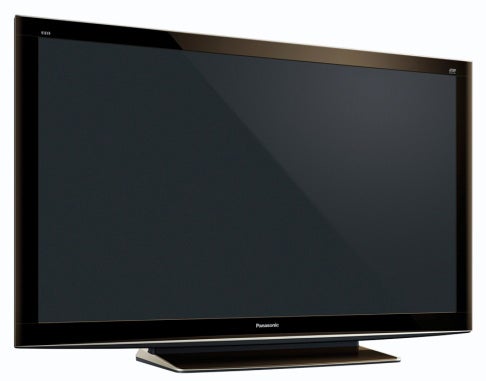 We’ve covered this service in depth in a recent article on the various manufacturers’ online TV services, so we won’t go into it again here other than to say that its interface is very elegant; that its highlights include YouTube, Picasa and the AceTrax movie rental/purchase service; and that it’s fair to middling by online TV standards right now.


Further multimedia support in the P65VT20 comes courtesy of two USB ports and an SD card socket. These give you playback of movie, photo and music files, as well as allowing you to record broadcasts from the digital tuners to USB hard disk drives. Um, so long as these HDDs are part of Buffalo’s JustSTore Desktop HD-EU2-UK range, which remain the only models guaranteed by Panasonic to be compatible with its recording system.


People who read our review of the P50VT20, the P65VT20’s smaller brother, will remember that we praised its 3D pictures for suffering relatively little with crosstalk noise compared with LCD 3D TVs we’d seen. This is also the case with the P65VT20 – though strangely, not quite so convincingly.


In other words, while the ghosting around certain objects in the middle and far distance in 3D mode continues to be less aggressive than it usually appears in the brighter 3D environment produced by LCD TVs, it also seems slightly more noticeable than it was on the P50VT20. Given that the technology driving both TVs is the same, we can only imagine that this is simply a product of the P65VT20’s extra size, which leaves even subtle traces of crosstalk noise with nowhere to hide.


The P65VT20’s enormity also makes it easier to appreciate the resolution difference between full HD 3D Blu-rays and Sky’s lower-res side-by-side 3D action – but this is hardly Panasonic’s fault.

The P65VT20 predictably retains the same excellent black level response with 3D material that we noted with the P50VT20, and also benefits from plasma’s near-immunity to motion blur. Don’t forget that any problems retaining clarity with moving objects are only exaggerated in a 3D environment.


The presence of deep black levels helps the P65VT20 build a really convincing sense of depth within its 3D world – though you do have to sacrifice a few shadow details along the way.


As noted with the P50VT20, the P65VT20’s 3D pictures aren’t nearly as bright as those of 3D LCD/LED TVs. But we don’t necessarily see this as a major problem so long as you’re able to get your viewing room pretty dark for 3D viewing. (We’d recommend this in any case where Panasonic’s 3D TVs are concerned because of the way the rather poor 3D glasses included with the TV let ambient light sneak in between your eyes and the lenses.)


The sheer size of the P65VT20’s screen also kind of hides the screen’s lack of 3D brightness to some extent, unless you’ve got a particularly vast viewing room. The P65VT20’s size additionally helps with the immersive aspect of 3D viewing, filling your field of vision. 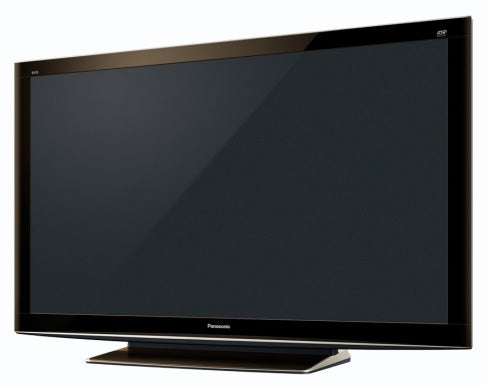 As with the P50VT20, despite its slightly more obvious crosstalk noise and other flaws, the P65VT20 reaffirms our feeling that Panasonic’s plasmas currently produce the most watchable – especially over extended viewing periods – 3D pictures that we’ve reviewed so far. This feeling might only improve, too, following the launch at the IFA show last week of new Panasonic 3D glasses that come in three sizes and appear far better at cutting out ambient light than the current ones.


The effort the P65VT20 puts into its 3D pictures actually also pays handsome dividends with 2D material. For instance, the contrast you get with any 2D footage, HD or standard def, is truly exceptional, as inky rich black colours co-exist within the same frame as reasonably punchy and certainly natural bright whites and colours.


Motion also looks crisp in 2D mode, and the set excels at presenting the full detailing and sharpness of good quality HD sources. It’s also a pretty effective upscaler of standard definition considering the obvious challenges involved with making standard def even remotely enjoyable at the 65in level.


The only problems left to talk about, in fact, are some occasional minor dot crawl on fleshtones during camera pans, and some judder with PAL sources. You can more or less remove this latter issue if you engage the TV’s Intelligent Frame Creation processing, but not everyone is fond of this sort of motion processing.


Throw in an LCD-thrashingly excellent real-world viewing angle with all the other good stuff, though, as well as a surprisingly powerful, dynamic sound performance, and the P65VT20 is clearly another hugely lovable Panasonic plasma TV.


First and foremost, the P65VT20 is a staggeringly good 2D TV, that absolutely sings with good HD material. It also happens to be the most consistently watchable – if not very bright and not totally crosstalk-free – big-screen 3D TV we’ve seen.


There’s a part of us that wonders a little if it might be worth waiting for 3D round two next year, though. And we definitely suspect there will be a few people who might wish for a cheaper, non-3D 65in Panny plasma – say a P65V20.


But while this is all food for thought, it doesn’t alter the fact that the P65VT20 is a brilliant and huge (therefore more immersive for 3D) TV that really does represent the state of the art circa early September 2010.