I’ve already seen a large number of TVs from Panasonic’s current, expansive range, some great, some good, some average, some innovative, some straightforward – really, it’s been quite a roller-coaster ride. But to some extent the P58V10 is the most exciting Panasonic model yet. Why? Mostly because it’s absolutely massive!


As its name suggests, the P58V10’s screen weighs in at a mighty 58in. And as I’ve noted in reviews of really large screens before, it’s quite strange just how much extra impact that extra eight inches delivers over a 50in screen. It’s kind of like the difference between a screen many households could cope with in a living room, and a screen so big most people would probably only put into a dedicated movie room.


The P58V10’s enormity doesn’t end with the sheer acreage of its screen, either. For its bezel is strikingly large, sticking out around a couple of inches beyond each edge of the picture. And the rather bland, gloss-free, black rectangular nature of the bezel doesn’t exactly make the screen any less impactful on your room. 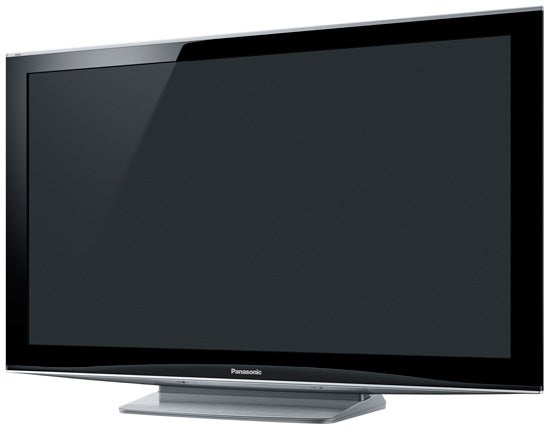 But hell. If you’re seriously considering buying a TV that’s 58in across, I’m guessing that preserving the decorative integrity of your room isn’t the main thing on your mind, right?!


Of considerably greater importance to your needs is likely to be the P58V10’s connections. And here the set does very well, if not quite excellently. For your HD/digital video sources, for instance, you get four HDMIs – enough for a PS3, Xbox Elite, Sky HD box and maybe a separate high-end Blu-ray player, but one less than we’re now finding on the top-end screens from Samsung and Philips.


Also catching our eye on the connections front is an SD card slot that can parse JPEG, AVCHD and DivX files, plus a rather important Ethernet port. This latter jack has not one but two purposes. First, it should provide a portal to the BBC’s iPlayer service (should good old Aunty Beeb ever actually get the system up and running on the Freesat platform), and second, it lets you explore Panasonic’s VieraCast online service.


This carefully ring-fenced corner of the Internet is rather limited in scope at the moment, containing only YouTube, Eurosport and Picasa sites, formatted so that they’re easier to navigate using the TV’s remote control rather than a mouse and keyboard.


But as with all current online TV platforms, there’s always the potential for further content providers to be added further down the line.

The more observant of you may have noticed that I mentioned Freesat a couple of paragraphs ago. For the P58V10 is, as we’d expect given its near-top position on Panasonic’s TV ‘ladder’, equipped with a built-in Freesat HD tuner.


This sits alongside Freeview and – shudder – analogue tuners, covering the gamut of free-to-air TV options currently available in the UK. And all the brave new digital channels the TV brings you are tucked away within reasonably tidy electronic programme guides.


While the P58V10’s raw size, Freesat tuner and multimedia capabilities go some way towards explaining its slightly hefty-looking price tag, though, I still feel as if it needs to go a bit further still before I’ll be truly satisfied on the value front.


Cue the set’s video processing engine, which uses Panasonic’s Intelligent Frame Creation interpolation technology to produce a claimed 600Hz picture. In other words, the interpolation technology adds enough sub-frames to the original image to create 600 different images a second. It’s important to stress that the P58V10’s panel does not actually refresh itself 600 times a second, as we’d usually expect to be the case when we’re talking about a ‘Hz’ figure on a TV. 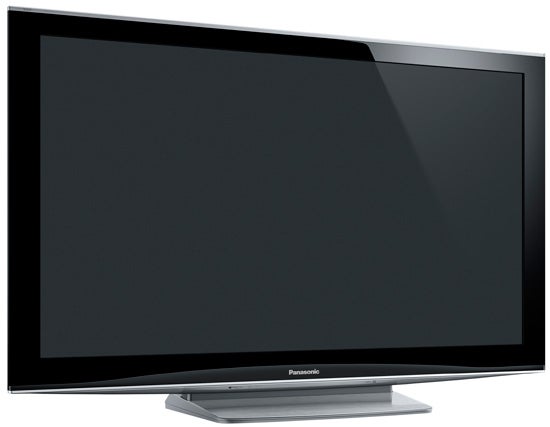 Panasonic’s V-Real Pro 4 video processing engine is on hand to deal with other aspects of the picture, such as noise reduction, scaling and colour, and the set also enjoys Panasonic’s Digital Cinema Colour system, designed to recreate a colour range close to that seen in commercial digital cinemas.


One final noteworthy feature is the P58V10’s THX certification, showing that George Lucas’ ‘quality control’ outfit reckon the screen has got what it takes to deliver home cinema perfection. In fact, the set even boasts a THX preset, featuring image settings reckoned to produce the most movie-like experience. And if there’s one thing the P58V10 certainly can do, it’s produce a movie-like experience.


As we’ve noted before, stepping as high up Panasonic’s range as you can really does reap considerable performance dividends this year, and the P58V10 reaffirms this belief in emphatic fashion. For while the images from the G series, which rests one rung further down the Panasonic plasma ladder, are good, those from the P58V10 are in a different class.


The main reason for this is the P58V10’s much better colour response. Some of Panasonic’s lower-level TVs haven’t blown me away with their colour tones this year, with green or orange undertones creeping into pictures. But, possibly thanks to the Digital Cinema Colour engine, the P58V10’s colours during HD viewing are really terrific; natural, subtly blended, yet also vibrant in a way we don’t often see with plasma technology. With such a terrific colour palette on display, it’s really no surprise that THX decided to get involved with the P58V10.


It has to be said that the colour palette can look a touch forced sometimes when you switch to standard definition, but it doesn’t take much effort to tweak the TV’s settings to calm this problem down to an acceptable level.

The P58V10 also excels with the sharpness of its pictures when watching HD. The combination of its impressive video processing and Full HD resolution gets the maximum impact from the huge 58in screen, leaving no pixel unturned in its effort to produce HD images of heart-warming – and noiseless – clarity.


Then, as usual with a mid-level or higher Panasonic plasma, there are the P58V10’s black levels to consider. For as well as achieving an inky black level depth that only LED-backlit LCD TVs or Pioneer’s last KURO sets challenge, the P58V10 manages to combine the blackness with exceptionally subtle presentation of shadow detailing – something that direct LED LCD TVs still struggle with to some extent. 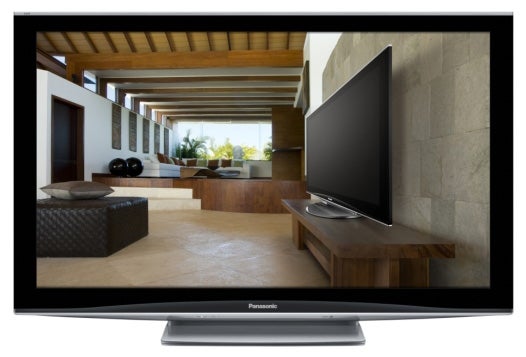 However much issue I might take with the accuracy of the 600Hz name Panasonic has given to its motion processing, meanwhile, I do have to admit that the system really does a good job of slashing the amount of judder evident in the P58V10’s pictures, helping action sequences look much less jerky and blurred.


There are occasionally one or two processing artefacts to show for the motion processing’s efforts, but provided you don’t leave the system running at its maximum level, its benefits comfortably outweigh the sporadic negatives.


With some reasonably punchy, dynamic and clear audio to accompany its vast and mostly excellent pictures, the only downer I have on the P58V10’s pictures are that its standard definition pictures don’t look as sharp as I know they can. But then they also don’t look as noisy as is often the case with super-sized screens, so I guess you could say the situation is six of one and half a dozen of the other, as my dear old nan is always saying.


The P58V10 may only be a solid standard definition performer, but it goes without saying that a screen of such magnitude simply cries out to be fed a diet as rich in high definition content as possible. And with HD, its performance truly is imperious – even more so, I’d argue, than Panasonic’s more expensive ultra-thin Z1 range.