Regular readers will know that we’ve already seen most of Panasonic’s ground-breaking VT20 3D plasma TVs. But the one that’s slipped through the cracks has the potential, in our opinion, to be the most popular model of all.


That model is the TX-P46VT20: arguably the perfect combination of an easily manageable but still large 46in screen size with a reasonably approachable £1,550 price tag. This makes it a good £250 cheaper than the 50in VT20 – a substantial saving for the sake of 4in of picture.


Given how impressed we’ve been by previous VT20 TVs, the P46VT20 clearly arrives with some excellent heritage. However, it’s also the first Panasonic 3D TV we’ve tested in the wake of all the new 3D tech on show at the CES, so with some of that CES 3D tech due to emerge here in the next month or so, we’re intrigued to see if the VT20 series still impresses us as much as it once did. 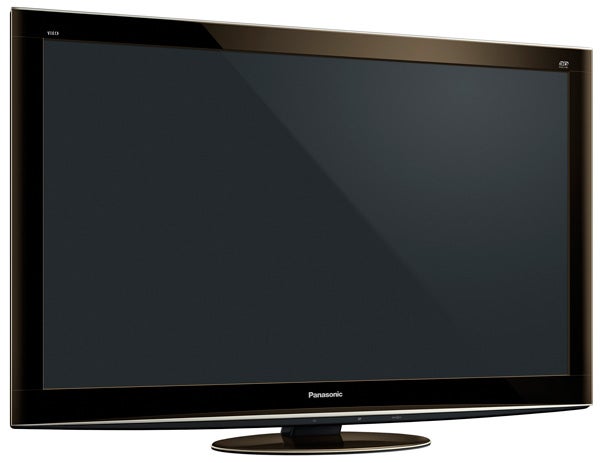 It certainly doesn’t get off to a great start. For if anything the P46VT20‘s well-built but dour aesthetics look even less glamorous than they used to now that we’ve seen the upcoming, ultra-sleek 2011 designs from the likes of Samsung and LG. Panasonic appears to believe that its target audience is by its nature conservative – but we’re not sure this is true. Especially when you’re talking about the early adopter market likely to be buying a 3D TV already.


Anyway, the P46VT20’s rear is actually more attractive, at least to the extent that it has pretty much all the connections you could hope for. Four HDMIs provide inputs for HD and full HD, active 3D signals; two USB inputs allow you to play back photo, video or music files from USB devices and/or make the TV Wi-Fi ready via an included dongle; an SD card slot provides an additional direct way of playing back photos, music and video files (including DivX HD); an Ethernet port permits wired access to DLNA PC files or Panasonic’s Viera Cast service; plus you get a satellite connection as well as an RF input, reflecting the fact that the P46VT20 has a built-in Freesat HD tuner as well as a Freeview HD one.


This is, of course, very handy for people living in areas not yet served by Freeview HD, and in fact it’s a policy that other brands are adopting too with their upcoming 2011 ranges. One last trick to do with the P46VT20’s connections is the ability to record from the HD tuners to USB storage devices. Or to be more precise, Buffalo JustStore HD-EU2-UK USB storage devices. We’re sincerely hoping Panasonic broadens its compatibility ‘church’ where USB recording devices are concerned if the recording feature persists through the brand’s 2011 range (kicking off in March).


The plasma screen driving the P46VT20 is the best Panasonic currently has to offer outside of its ‘pro’ business, using the latest iteration of Panasonic’s NeoPDP technology together with an Infinite Black Pro filter not found on sets further down Panasonic’s range. Plus you get Panasonic’s ‘fast-decay’ technology for reducing that dreaded active 3D phenomenon of crosstalk (double ghosting) noise.

Also on board is the highest level of Panasonic’s V-Real Pro processing technology, and the brand’s ‘600Hz’ Sub-field Drive technology for increased stability, solidity and judder reduction. But likely of more interest to readers is a decently well-stocked suite of picture adjustments.


Panasonic has been notoriously tardy about putting control of the subtlest picture adjustments in the hands of the general public, but it’s finally got with the programme, bagging endorsements from the Imaging Science Foundation (ISF) and THX in the process.


Among the most significant of the tweaks Panasonic has opened up on the P46VT20 are a colour management system (even though there’s room for improvement with this in terms of both flexibility and presentation) and a handful of gamma presets. 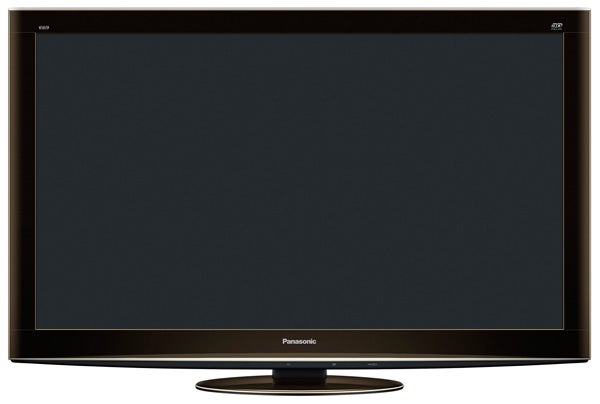 Also tucked away in one of the P46VT20’s rather obscurely organised onscreen menus is a facility for adjusting the potency of Panasonic’s motion smoothing system, Intelligent Frame Creation. We appreciate that some of our readers won’t touch this with the proverbial barge pole, at least with Blu-ray movies. And it’s true that on its higher settings it does make film look like video, and can generate a few processing artefacts. But on its lowest setting it can also slightly diminish the issues with judder that are one of the only consistent bugbears we have with Panasonic plasmas, so we’d suggest you at least try it out. If you hate it, then just leave it off!


Starting out with the P46VT20’s 3D pictures, our response to them is immediately slightly different to what it has been before. Not because we don’t still think they’re mostly excellent, but because the imminent arrival of the first true 2nd-generation 3D TVs has given them a slightly more transitory feeling that makes us more conscious of their failings.


These failings are centred around two areas: the image’s brightness, and Panasonic’s glasses. Regarding the first of these issues, Panasonic readily admits that its 3D images lose as much as 80 per cent of their brightness when you’ve got your active shutter glasses on – a fact which can result in some lost shadow detail and slightly crushed dark colours, as well as a slightly muted general look to 3D pictures – even when the set has pumped up its brightness and contrast levels to counteract the impact of the 3D tech. The lack of brightness is all the more striking now we’ve seen what’s incoming from some of the new LED 3D screens.


However, provided you can watch them in a reasonably dark room, the brightness reduction caused by the 3D glasses isn’t intolerable by any means, and doesn’t diminish from the natural, sharp, and clean look of the P46VT20’s 3D playback – or its deep black level response. These strengths underline what remains the key and for us deciding factor about the P46VT20’s 3D efforts: their almost complete freedom from the dreaded crosstalk noise witnessed on all LCD 3D TVs (CCFL and LED) to some extent.

While Panasonic’s 3D brightness issues now look more damaging than they did before the CES, we’re certainly not sure yet if the new spate of non-plasma 3D TVs will solve their crosstalk issues. And we find crosstalk so distracting that the relative lack of it on the P46VT20 is still extremely persuasive.


Doing its best to undermine all the good 3D work being done by the screen, though, are Panasonic’s 3D glasses. You get two pairs included free with the TV, which is nice, but while the new design Panasonic has gone for with its latest glasses is a minor improvement on the awful things the brand rolled out alongside its very first 3D TVs, they’re still pretty poor. The basic problems are a) that the lens section is too narrow, so you have to perch them at the end of your nose and turn your head down to get the whole 3D picture in view, and b) that the curved, open sides can allow light to reflect from the room on to the lenses.


The P46VT20’s 2D performance is exemplary. Black levels, for instance – while still not managing the old Pioneer KURO levels of excellence are nonetheless natural, rich in detail and accompanied within the same frame by bright whites and vivid colours in a way no LCD screen can match. The best direct LED sets perhaps deliver an even greater sense of dynamism, but they always lose shadow detail along the way. 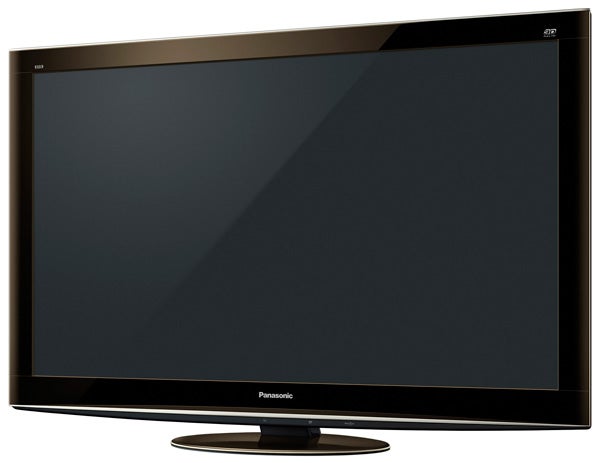 HD pictures on the P46VT20 look superbly crisp and detail, meanwhile, without this sharpness being accompanied by noise or over-sharpening. The set’s a good handler of standard definition too, upscaling it with a sharper finish and more natural colours than we see with some of Panasonic’s cheaper plasma TVs.


The self-emissive nature of plasma TVs further ensures that a) the P46VT20’s pictures withstand scrutiny from much wider angles than those of any LCD TV, even Panasonic’s own IPS Alpha models, and b) there are no brightness ‘hotspots’ to worry about.


Motion is handled well as noted earlier, and finally the range and subtlety of the P46VT20’s colours is a sight to behold – even if the overall colour push isn’t as aggressive post-calibration as it is on some LCD/LED TVs.


The P46VT20 joins the other VT20 models we’ve seen in delivering Panasonic’s best plasma picture quality to date – and that’s saying something.


Panasonic has had numerous stabs at boosting the sound from flat TVs in the past, with its latest efforts being the use of bamboo speakers in the P46VT20. These do actually deliver a noticeably natural, uncluttered sound by flat TV standards, with some good treble precision too. However, it would appear that even bamboo can’t guarantee much in the way of bass…


It’s also a stellar 2D performer, and not bad on the multimedia front either, even if its Viera Cast online system is slightly off the pace of some rival platforms.