Yeah, yeah, I know: yet another bloody Panasonic TV. But actually, I’m not in the least bit apologetic. For it’s hardly my fault if Panasonic has such a huge range of screens coming out this year for us to cover. And nor is my fault if Panasonic is more proactive than any other brand when it comes to providing us with test samples. What’s more, today’s Panny model, the TX-P46G10, is anything but ‘just another plasma TV’. For it’s the first model we’ve seen that employs Panasonic’s new NeoPDP technology.


NeoPDP screens are claimed to be the results of Panasonic going ‘back to the drawing board’ in search of ways to significantly boost the performance of its plasma panels, with particular focus on its IC and panel structure technologies. And they include new phosphors and cell designs to boost the efficiency of each plasma chamber’s discharge cycle, as well as new circuit and drive technologies to reduce by a staggering 50 per cent the amount of power needed to produce their pictures.


Panasonic has actually used this huge improvement in power efficiency to provide the option of achieving the same brightness levels as you get with last year’s plasma screens while using far less power, or else using the same power used on last year’s screens to produce far brighter images. 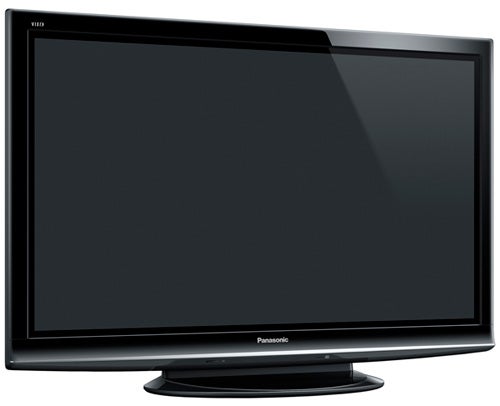 The fact that the NeoPDP panels are more energy-efficient than their ancestors will inevitably prove helpful in countering LCD’s ‘plasma isn’t green’ mantra. But you know, much as I love our green and pleasant planet, I have to selfishly admit that I’m really more keen on the other benefit that Panasonic’s NeoPDP panel should bring: improved picture quality. Or more specifically, improved motion performance thanks to a faster (0.001ms!) response time, better colour reproduction, and last but not least, enhanced contrast.


Regarding this latter potential improvement, Panasonic has actually stuck the ‘infinity’ symbol on the TV’s marketing blurb to describe its contrast talents. Admittedly underneath this symbol are the words ‘over 2,000,000:1′ by way of qualification. But the bottom line is that the P46G10 should be serving up the single greatest contrast performance of any Panasonic plasma to date. In fact, it could even deliver black levels to better any rival TVs from any brand, including Pioneer’s legendary KURO models.


You might think that all this fancy NeoPDP stuff would be innovation enough for the P46G10, but no. For the set is also Panasonic’s first TV with 600Hz Sub-Field Drive Intelligent Frame Creation Pro technology. The show-stopping 600Hz figure included within that mouthful of a feature certainly sounds very impressive when you consider that Sony’s only just cracked 200Hz with its much-vaunted Z4500 LCD TVs. But as we discussed when talking about a similar 600Hz claim recently made by LG’s 50PS8000 plasma TV, the P46G10’s 600Hz figure is actually derived not by increasing the refresh rate to12 times the usual 50Hz level, but by including in the frame rate calculation new image frames – or sub-fields – calculated by the TV to contain the necessary picture information to ‘fill in the gaps’ between the real 50Hz frames obtained from a source.

Of course, introducing 12 extra frames for every single real frame in a 50Hz video stream isn’t easy, requiring a veritable powerhouse of video processing. As a result, Panasonic is using frame rate numbers as one of the major distinguishing features between its new high, mid and low-end models. For instance, while models from the G10 and higher ranges get 600Hz, the step-down S10 models get 400Hz, while the lower-still X10 models get 100Hz.


Regular readers will probably guess that the technology delivering the 600Hz frame result on the P46G10 is Panasonic’s Intelligent Frame Creation system, which can be switched on or off via an obscurely named Other Settings sub-menu. Not that the P46G10 is generally obscure to use, mind you. As I always try to point out in any Panasonic review, I actually find the brand’s operating system one of the simplest around, thanks to a well laid-out remote control and clear, concise onscreen menus.


Having inevitably focussed so far largely on the completely new features the P46G10 brings to the table, it’s taken me a bit longer than expected to get to yet another ace up the TV’s sleeve: its built-in Freesat tuner. Building reception of Freesat’s HD and standard def channels into a flat TV’s bodywork has proved a commercial masterstroke so far on Panasonic’s part, chiming perfectly with a clutter-hating, cash-strapped marketplace looking to avoid paying subscription fees for their TV channels. As ever, the Freesat tuner is joined in the P46G10 by a Freeview tuner, with decently presented electronic programme guides available for both. 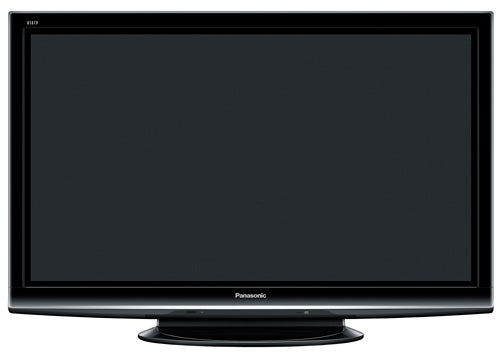 Other notable facts about the P46G10 find it sporting an SD card slot capable of playing AVCHD movies as well as JPEG stills, a slightly underwhelming HDMI count of three, and the increasingly ubiquitous Eco mode, whereby the picture can be set to automatically adjust its brightness output in response to light levels in your viewing room.


If I’m honest, while the new X10 Panasonic plasma TVs I’ve seen so far have been good, they haven’t been truly outstanding, leaving me feeling that the brand was holding stuff back for its higher-spec models – a feeling that’s entirely borne out by the clearly superior P46G10.


For instance, as the NeoPDP blurb promises, pictures on the P46G10 look noticeably more dynamic thanks to striking improvements in both the depth of the screen’s black level response and general brightness level.


The P46G10’s black levels actually achieve KURO-esque levels of rich, pure darkness. During a Blu-ray run-through of Quantum of Solace, for instance, the corners of the cave where Bond ends up with Camille following their escape from a plane crash, for instance, look almost completely dark. But far more importantly, the ease (relative to LCD) with which the P46G10 achieves these black levels, together with the image’s greater brightness, means that there’s an outstanding amount of shadow detailing on show. In other words, you can clearly see background rocks and patches of light in the cave sequence that just aren’t visible at all on most flat TV rivals.

The P46G10 also improves significantly over Panasonic’s X10 models with its motion reproduction. Objects generally pass across the screen more fluidly, and camera pans are in a completely different league. I’m not saying that even the use of a 600Hz system has removed every last trace of judder, because it hasn’t. So there’s still room for further improvement. But fast camera pans are certainly much less jarring, and crucially the P46G10 achieves its motion enhancements while generating seemingly no nasty processing side effects at all.


The P46G10 employs a full HD 1,920 x 1,080 pixel count, and gets good use out of all these pixels if the amount of detail visible in HD pictures is anything to go by. You can, for instance, easily discern the filmic grain visible in the high-contrast black and white shots at the start of Casino Royale (blimey, I’m starting to sound like an Alan Partidge-esque Bond obsessive!), and regular HD delights such as facial pores and the weave in clothing are regularly on the menu.


The P46G10 is not just HD’s friend, though. For unlike many large Full HD TVs it’s also got the video processing know-how – powered by Panasonic’s latest V-Real Pro 4 system – to upscale standard definition extremely adroitly. Standard def images thus appear with a commendable level of sharpness, and with decent subtlety when it comes to colour blends. This latter achievement means that faces generally avoid the rather plasticky look they can take on with lesser screens. 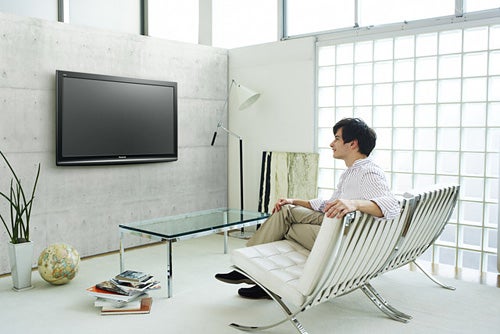 Although improved over the pictures of the X10 models, though, the P46G10’s images aren’t completely perfect. For as well as the residual judder during camera pans noted earlier, I also didn’t always feel 100 per cent convinced by its colours. Gentle orange or green undertones seemed to slip into proceedings from time to time, occasionally making skin tones look marginally unnatural, and even occasionally having the effect of reducing the picture’s overall colour dynamism.


I’d argue that this is actually a pretty small price to pay for all the strengths the P46G10 delivers, especially when it comes to black level. But I guess there may be people out there who set rip-roaringly vibrant colours above all else on their picture check list who might prefer a good LCD model instead.


With so many interesting picture issues to get my teeth into, I’d fully expected the P46G10’s audio to be a bit of an anticlimax. Especially as other Panasonic models from lower down the food chain have been entirely run of the mill sonically. But in fact the P46G10 doesn’t sound at all bad. It’s certainly got the raw power to serve up some surprisingly extreme volume levels without succumbing to speaker phutting or harsh trebles, and bass levels are unusually strong. The only significant problem is that voices – especially male ones – occasionally sound a little ‘thick’ and forced.


While some minor colour issues have got me champing at the bit for Panasonic’s V10 plasma models, which will carry Digital Cinema Colour processing, the P46G10 is nonetheless a hugely accomplished and, under the circumstances, great value Freesat TV that really brings Panasonic’s new range to life.