Given the enormous vested interest it has in its beloved plasma technology, it’s hardly surprising that Panasonic has been rather tardy about getting involved in the LED scene. But with the 32in L32D28, the Japanese brand has finally bitten the LED bullet, plumping for the edge-mounted LED approach for its debut screen.


With this in mind, it’s surprising that the L32D28 isn’t significantly slimmer than most ‘ordinary’, CCFL-based LCD TVs. After all, one of the key reasons to go the edge LED route is its potential for making screens exceptionally thin.


Not that the L32D28 is by any means bland aesthetically, however. For starters, the really heavy, metal desktop stand it ships with is designed so that you can slide the TV right down its neck, leaving the TV sitting almost flush with the table. The stand also tilts the screen back slightly, for a more comfortable viewing angle. 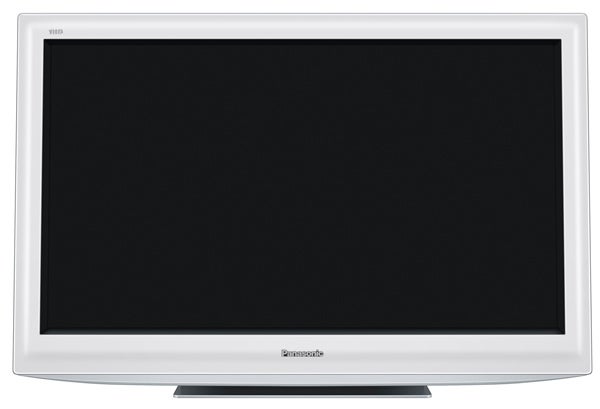 Most striking of all, though, is the fact that our review sample was white. Given Panasonic’s monotonous penchant for black over recent years, this high-gloss white finish really comes as a surprise – and definitely a welcome one. Especially as strangely the white finish somehow makes the set’s sculpting look more attractive than the actually quite similar lines carried by the brand’s black screens.


Not that white is your only colour option, either. For the L32D28 is also available in silver and purple alternatives. Blimey. Someone in the Panasonic design department has been on the whisky!


The L32D28’s connectivity is impressive, too. For starters, it boasts a satellite LNB connection as well as the usual RF input, indicating that this is another Panasonic TV that carries both Freesat HD and Freeview HD tuners built in. Panasonic remains the only brand to offer so much HD broadcast flexibility. 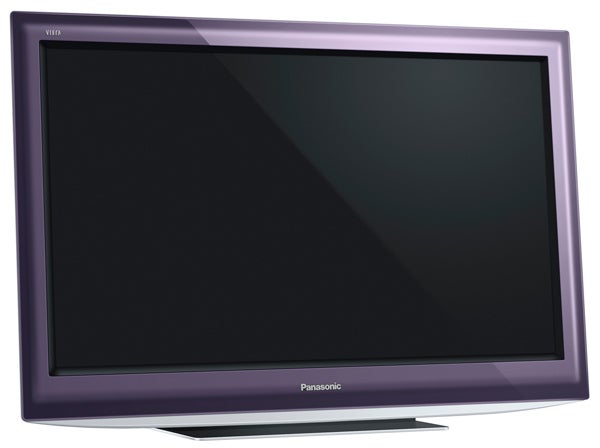 The set also enjoys four HDMIs, all of which, according to the instruction manual, are v1.4 affairs. Though only one of them actually supports the Audio Return Channel for shipping digital audio to suitable AV receivers that’s part of the HDMI v1.4 specification.


The set’s other connection highlights are mostly concerned with multimedia features. There’s an Ethernet port, for instance, through which you can access future Freeview/Freesat interactive services; Panasonic’s VieraCast online service; and files on a DLNA-enabled PC. Plus there’s the more predictable D-Sub PC input, and rather more impressively, two USB ports and an SD card slot for direct playback of various video, photo and music formats, including DivX HD and AVCHD.


The USBs have two further points of interest, too, since they also a) let you make the TV Wi-Fi capable via an optional dongle, and b) let you record programmes from the digital tuners to a connected USB HDD.


These recordings work superbly, appearing to our eyes identical to the original broadcasts – but please note that you may need to buy a new USB HDD drive to make the recordings happen, since Panasonic only recommends Buffalo’s JustStore Desktop HD-EU2-UK series as guaranteed to work with its TVs. And certainly no other brands of HDD we had lying around did the trick.


Please note, too, that you can only play back the programmes you record to USB HDD on the same TV you made the recordings through. There’s no shipping them off to a PC or portable video device.

Setting about calibrating the L32D28’s pictures, we were pleased to discover that it carries Imaging Science Foundation (ISF) endorsement. Activate the ISF option from the TV’s setup menu, and you’ll then be able to access an Advanced Settings sub-menu containing adjustments to the gain and cut-off of the red, green and blue colour elements, as well as five different gamma presets – including the most widely useful 2.2 one.


Obviously such fine-tuning tools are best used by an ISF engineer. But while we would agree that paying a certified ISF expert to come round is always worthwhile, we also believe most TrustedReviews readers could probably muster enough knowledge in conjunction with a simple TV set up aid like the HD Digital Video Essentials Blu-ray to have a stab at fine-tuning things for themselves.


Other more basic adjustments include a vivid colour processor, a multi-level noise reduction tool, and no less than eight unusually well-considered picture presets. These include a Game mode, a Photo mode (more brands should include one of these), and two ‘Professional’ modes intended for ISF use. Plus there are two separate Cinema modes: one designed to optimise the picture’s contrast performance for a dark room environment, and one that claims to produce a picture closer to the standards usually applied when mastering sources. 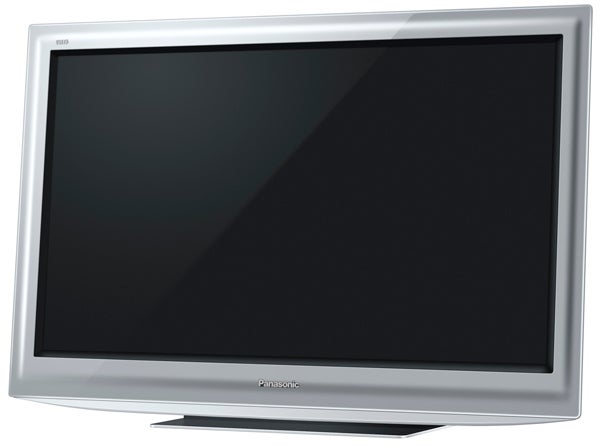 Before getting into the L32D28’s pictures, a quick word on Panasonic’s VieraCast system. It looks a little content-light at the moment compared with the latest online offerings from Sony and Philips, but it’s beautifully presented and extremely easy to use.


It’s quickly apparent as we settle down to watch the L32D28 that Panasonic has mostly hit the ground running with its edge LED debut.


For starters, its pictures are pleasingly punchy, thanks to the sort of impressively expansive contrast range we’re starting to expect more and more from LED TVs. Light scenes can look bright, colourful and dynamic, while dark scenes can look, well, dark, rather than washed out and grey.


We qualified both the above statements with ‘can’ only because some of the picture presets can change the ballpark rather a lot. For instance, the Cinema mode really does knock brightness levels down considerably, to a point where we’d say they’d only be engaging in a totally dark room. And the set’s black level response certainly reduces if you use the dynamic, normal or game settings.


If you opt to use one of the three picture presets mentioned above, we’d strongly recommend that you ‘tame’ the backlight/brightness quite a bit if you want to make the backlight inconsistencies tolerable.


Another strength of the L32D28’s picture is its sharpness. HD pictures look crisp, remarkably clean, and best of all extremely rich in detail. But standard definition pictures are no slouch either, with Panasonic’s new Resolution Enhancer feature repeating the successes its scored on other recent Panasonic models – provided you don’t set it to its highest level, at least.


We’d warn you away from leaving the IFC mode set higher than its mid level, for the Max one can occasionally generate a few processing side effects with really fast-moving material. But so long as you follow this simple tip, you’ll probably finding yourself completely forgetting for most of the time that you’re watching an LCD screen, so clean is the motion presentation.


The L32D28’s colours are really very good too: Vibrant, rich, dynamic, but also, crucially, subtle. Such tricky fare as skin tones thus appears without patchiness or banding, yet with enough shade and tone differentiation to ensure that faces don’t look waxy and flat like they can on lesser TVs. 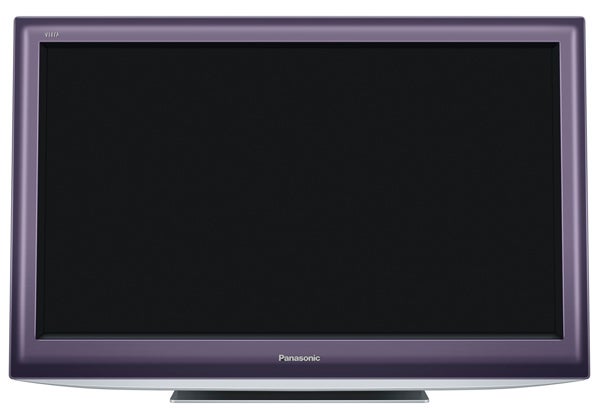 One final plus point to mention is that the L32D28’s viewing angle seems slightly more forgiving than most LCD TVs. It’s still no match for a plasma screen, with greyness settling over blacks and other colours losing saturation from around 45 degrees and more. But this compares favourably with the mere 20-30 degrees of angle achievable with many LCD TVs, and the level of the drop off in colour, in particular, doesn’t seem as severe.


For most of the time, the L32D28’s pictures really are extremely good for a 32in TV, providing few if any reminders that this is Panasonic’s first commercial stab at edge LED technology. In a perfect world the backlight ‘seepage’ coming in from three or four sites along the screen’s edge during very dark scenes would be slightly less obvious, or perhaps more accurately, you wouldn’t have to reduce the image’s brightness quite so drastically to get rid of it.


Following on from this, some dark scenes look a touch lacking in shadow detail once they’ve been calibrated to reduce/remove the backlight seepage.


Continuing in a minor negative vein, we should also say that the L32D28’s sound is nothing to write home about, performing well on the detail front, but sounding harsh and thin when pushed hard, on account of it not producing anything significant at the bass end of the audio spectrum. And finally, the L32D28 is undeniably expensive by today’s 32in TV standards – a bit too expensive, in fact.


But it’s simply not fair to end a review of the L32D28 on a negative note, for despite its flaws, the fact remains that its pictures are some of the best the 32in TV world has to offer right now.


If you’re in the market for a premium performance 32in TV and have a reasonably plush bank account, the L32D28 is an impressive option you simply have to put near the top of your audition list.


In the end, its price feels at least £100 or so too expensive for a 32in TV for us to hand it the Recommended rating it deserves in so many ways. But of course, if you spot it being reduced in price in the months ahead, this objection will melt away.