History suggests that getting any sort of Panasonic flat screen TV in for review these days is a cause for celebration. So when that TV also happens to be a ‘flagship’ model, as with the 32in 32LXD700, it’s fair to say our excitement dials pretty much get turned up to 11.


Which is all fine and dandy provided the TV actually lives up to the quite possibly unreasonable expectations we’ve built up for it. If it falls short in some way, our post-review disappointment will probably be felt as keenly as our current high. And we certainly don’t want to have that hanging over the rest of the week!


Thankfully, the 32LXD700’s design gets things rolling in the right direction by combining some smart – if not particularly original – looks together with ultra-robust build quality. The TV is perhaps a bit chunkier round the back than we’ve come to expect from LCD screens now, but this is hardly an instant deal breaker.


Shifting our attention to the TV’s connections uncovers two of the key features that signify the 32LXD700’s flagship status: three HDMI sockets (rather than the two sported by Panasonic’s cheaper LXD70 LCD models) and an SDHC card slot from which you can play HD digital photos directly on the TV. 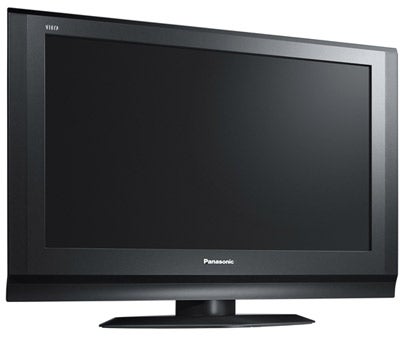 Other connections include the inevitable component video input, a digital audio output for passing out digital soundtracks received via the HDMIs, all the usual Scarts and so on, plus, of course, the paraphernalia associated with a built-in digital tuner.


Before we move on, it’s worth mentioning in passing that the HDMIs accept 1080p signals and carry Viera Link: Panasonic’s version of the increasingly common technology permitting the TV’s remote control to operate HDMI-connected sources. Please note, though, that unlike the similar systems of a number of competitors, Viera Link only works with Panasonic equipment, not different brands.


The 1080p talents we mentioned a moment ago come about at least in part via the 32LXD700’s sophisticated V-Real 2 Pro image processing engine, which as well as accepting native 1080p sources will also scale lower resolution sources up to the 1080p level before fitting them into the available pixels – in this case, 1,366 x 768.


We guess some of you may feel a bit disappointed that Panasonic’s top-end LCD TV doesn’t sport a full HD pixel count, but we have strong doubts that you’d really appreciate a full HD resolution anyway on such a small screen.


If this in turn makes you wonder why Panasonic’s flagship LCD isn’t a bit bigger, the answer lies simply in Panasonic’s continuing belief that when it comes to large screen sizes – as in, anything above 32in – plasma rather than LCD technology is where it’s at.

But we digress. Getting back to the 32LXD700, it’s worth quickly detailing the most important elements of the V-Real 2 processing aside from the 1080p stuff, since this will potentially be the thing that most helps the 32LXD700 stand out from an increasingly competitive LCD crowd.


For starters, there’s an ‘Intelligent Scene Controller’ which reduces the output of the panel’s backlight during dark scenes to create a superior black level response. Actually, similar technology to this can now be found on most rival LCD TVs (usually under the name of Dynamic Contrast’), but the Panasonic’s claimed contrast ratio of 8500:1 suggests that maybe Panny’s take on things is more impressive than most.


Advanced 3D colour management, meanwhile, is on a mission to automatically optimise the tone of colours, especially where skin tones are concerned, and a ‘sub-pixel controller’ helps the set produce smoother diagonal lines and greater sharpness by processing the image’s red, green and blue elements individually rather than all together.


Last but certainly not least is 100Hz processing, which doubles the scanning rate of incoming 50Hz sources to combat LCD’s traditional problems with blur and resolution loss when showing moving objects. On paper 100Hz is a winning concept, but we know from experience that if it’s not done well it can actually make pictures look worse rather than better. Yes, we mean you, Sharp LC-32RD2E… 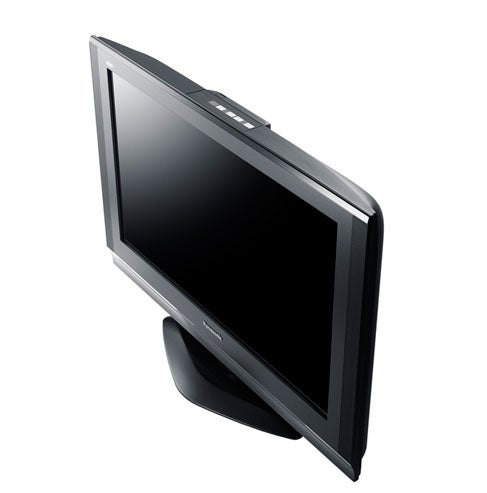 Happily the 32LXD700’s 100Hz processing presents none of the problems found with Sharp’s system. Which is to say, there are no discernible nasty side effects of the processing, such as shimmering and flickering edges or contour ‘echoes’. Admittedly, the effects of the 100Hz system aren’t as immediately pronounced as those of the Sharp’s RD2E sets, which make moving objects glide across the screen so perfectly that they actually look a bit unnatural and divorced from their backgrounds.


But at the same time there’s no denying that anything with a bit of action and/or camera panning in it, be it a movie like Con Air on Blu-ray or a game like Bioshock on the Xbox 360, enjoys motion noticeably crisper and cleaner than that seen on non-100Hz TVs – including Panasonic’s own 50Hz-only range. In other words, Panasonic seems to have more or less mastered the tricky balance between making 100Hz work and overcooking it.


Also a cut above the norm are the 32LXD700’s colours. Few LCD TVs out there right now can produce such a fundamentally naturalistic palette, a fact which proves invaluable while watching all the relatively dark shots inside the Con Air plane. But while this naturalism is what sets the 32LXD700 apart from most rivals, the set can also do vibrant and phenomenally bright colours, as witnessed during the final scenes on the Vegas strip.

It’s worth adding here, too, that thanks to the 32LXD700’s use of the very latest IPS Alpha LCD panel design, with its renowned capabilities when it comes to increasing viewing angles, you can watch the set from really quite a severe angle to the side without suffering much drop off in contrast or colour saturations at all – a feat that depressingly few other 32in LCD TVs have mastered.


According to recent research carried out on behalf of Philips, the single picture element that most TV viewers value above all else is sharpness. So it should win the 32LXD700 many more fans when we say that its HD performance is impeccable, delivering extreme clarity, detail and sharpness without a trace of noise.


This is not to say that the 32LXD700 is only into HD, though. The V-Real engine helps it become one of the best LCD screens we’ve seen at showing standard definition too, with hardly any of the aggressive video noise, smearing or flawed colour tone issues seen with so many LCD TV’s non-HD efforts.

If the 32LXD700 has any sort of weakness, it’s the way dark scenes like Captain Dallas’s ill-fated venture into the air duct system in Alien look a touch greyed over. To be fair, we’ve certainly seen far worse black level efforts from many, many rivals. But we’ve also occasionally seen better.


Providing admirable support for the generally spectacular pictures are the 32LXD700’s unusually powerful speakers. These provide the final major step up difference from Panasonic’s cheaper TVs by employing the brand’s ‘Advanced Smart Sound’ system designed to improve power and frequency range. And it doesn’t take long in the company of Con Air’s infamously raucous audio mix to realise that Advanced Smart Sound generally does exactly as billed.


AV purists that we unashamedly are, there’s no doubt whatsoever that the 32LXD700 is a hugely impressive LCD TV thoroughly deserving of its 9 out of 10 overall score. But it would nonetheless be remiss of us if we didn’t point out that if you’re not bothered by the 32LXD700’s extra audio power, third HDMI and SD card slot, you can actually get the same terrific picture quality from Panasonic’s 32LXD70 model for a good few quid less. The choice is yours.