As the lovely Hélène Mahieu once said, size matters. Of course she was talking about a Renault Clio, but the statement is even more true when it comes to TVs. You may be happy with a 32 or even a 37in screen in your living room, but once you see a truly big TV, you’ll instantly want it and find it hard to settle for less. Bizarrely though, this massive 58in plasma screen from Panasonic isn’t that large compared to other models in the range – you need to remember that Panasonic has a 103in TV sitting at the top of its range.


Despite the fact that the TH-58PZ700 is relatively small compared to the gargantuan 103in TH-103PF9 TV, make no mistake, this is a large screen. You’re going to need a decent size living room for this 58in TV not to dominate everything around it. Unlike many manufacturers, Panasonic doesn’t offer a 60in TV, instead opting for 58 and 65in models. I can only assume that the company gets better yield from the glass at these sizes. That said, it was only a couple of weeks ago that we looked at a 63in plasma from Samsung, so it seems that there are any number of size options up at the large end of the scale. 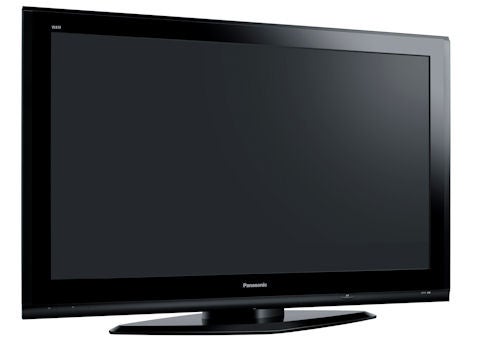 There’s always a chance that a very large TV will find itself aesthetically challenged, but the TH-58PZ700 hasn’t fallen foul of that problem. This TV may be large, but it looks as sleek and stylish as its smaller siblings. There’s a glossy black bezel surrounding the screen, which makes the whole TV look good even when switched off. If you go for the matching stand, that glossy black finish extends to the front of the cabinet, finishing off the effect perfectly.


Unsurprisingly this is a full HD panel, with a native resolution of 1,920 x 1,080, so you’ll have no problem outputting a high definition signal at the top 1080p standard. However, the TH-58PZ700 won’t accept a 1080p signal over component, only HDMI – this means that if you’ve got a component equipped Xbox 360, you won’t be able to set the output to the top 1080p setting.

Panasonic quotes a contrast ratio of 10000:1, which is on par with some of the high end LCD screens these days, on paper at least. What you need to remember is that the contrast ratios quoted for plasma screens are real, whereas the high numbers we’re seeing for the latest crop of LCD TVs come courtesy of dynamic backlight technology, where the backlight is dialled down for low light scenes. The difference is that a plasma screen is emissive rather than transmissive, so if some of the pixels in a scene are dark and some are bright it can achieve the desired result without compromise. An LCD on the other hand can often leave you with dark greys instead of blacks when there’s a mixture of bright and dark imagery in a scene. So, the 10000:1 contrast ratio quoted for the TH-58PZ700 is more impressive than a similar number for an LCD screen, but it’s worth remembering that Pioneer’s KURO screens manage a 16000:1 contrast ratio!


Connection wise the TH-58PZ700 is quite well endowed. You get three HDMI 1.3 ports, two at the rear and one at the front – this means that this TV is ready for Deep Colour if discs ever appear sporting the high colour depth standard. There’s also a set of component video inputs, with corresponding analogue audio inputs. You also get three SCART sockets, a D-SUB input for hooking up a PC, S-Video and composite inputs, along with corresponding analogue audio inputs. There’s an optical digital output for passing through a surround sound bit stream from an HDMI source to an external receiver or processor. The final connection is a CI slot for adding subscription services to the built-in digital tuner. 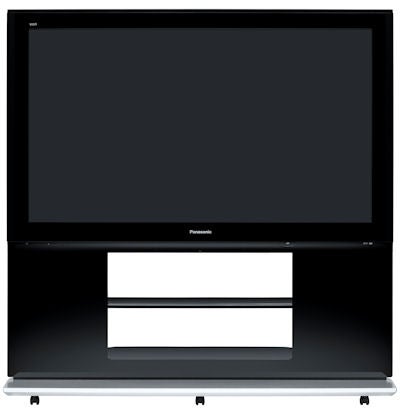 To give the TH-58PZ700 a really good run for its money, I hooked up my trusty Toshiba HD-XE1 HD DVD player and loaded up Blade Runner: The Final Cut. This disc is quite simply stunning, as is the film itself. I’ve waited a very long time for a better version of Blade Runner than my old CAV Criterion Collection LaserDisc, but this HD DVD really does do Ridley Scott’s masterpiece justice. The thing about Blade Runner is that the vast majority of the film is, well, dark. This makes a TV’s black level performance paramount, and I’m glad to say that this Panasonic does a superb job of rendering Scott’s dark and gloomy vision of the future.


Despite the constantly grim and dark settings in Blade Runner, the film is also blessed with some of the best lighting effects ever caught on celluloid, making this a real challenge for any TV. The TH-58PZ700 managed to resolve all the detail in low light areas of each scene, while also expertly portraying the high intensity lighting without causing any of the greying over that affects many LCD screens.

To help with testing this TV, Universal was helpful enough to release The Bourne Ultimatum on HD DVD, and although the final chapter in Jason Bourne’s story doesn’t represent as big a challenge for a TV as Blade Runner, it’s still a great disc to audition hardware with. The chase across the rooftops in Tangier, culminating with Bourne’s fight with Desh is a stand out scene – the bleached rooftops are a complete contrast to the dark, shadowy building interior and the TH-58PZ700 makes both locations look completely convincing while the focus switches between the two. 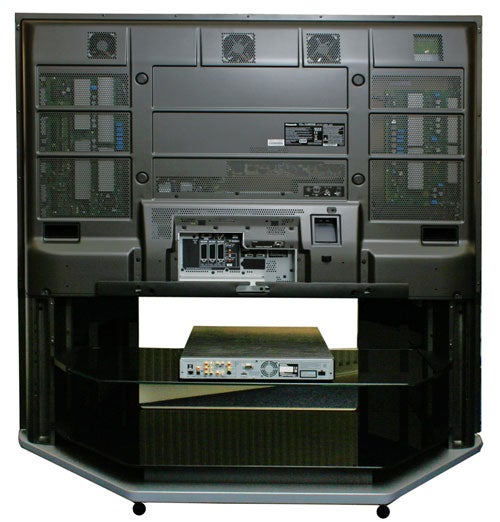 If there’s one chink in the TH-58PZ700’s armour, it’s the fact that it can’t process 1080p 24Hz signals. Although this TV is happy to accept a 1080p 24Hz signal, it will convert it to 1080p 60Hz before displaying it, which somewhat defeats the purpose of feeding it a clean 24fps source in the first place. Panasonic has assured me that the next generation of TVs will handle 1080p 24Hz signals properly and apply a simple 4:4 pulldown method to achieve a smooth 96fps image, much like the current crop of Sony TVs.


Surprisingly, the TH-58PZ700 doesn’t suffer too badly from its lack of proper 1080p 24Hz support. Having watched many movies on this screen over the past week or so, I’d be lying if I said I was disappointed in the image quality. Would proper handling of 1080p 24Hz sources produce sharper moving images? Probably, but I doubt you’d really notice unless you knew exactly what you were looking for and were looking hard for it. That said, this is still a feature that Panasonic really needs in its arsenal if it wants to compete with the rest of the high-end HDTV crowd. 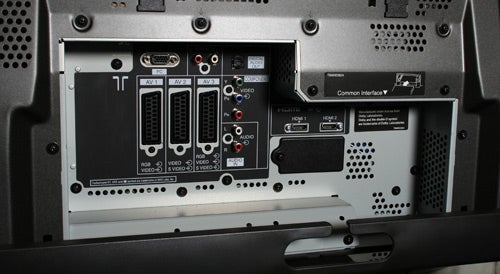 If you’re a gamer you’ll really appreciate having a big TV like this. Fire up a mates’ favourite like PES 2008 and settle back in your chair for a truly immersive experience. Likewise, the immensely playable Guitar Hero III has been a big hit in the office on this screen, with the background animations never looking better. Just make sure you avoid the Dynamic colour setting, which makes everything look a bit too cartoony – even cartoons!

Standard definition material is often a problem for very large screens, especially ones with a Full HD 1,920 x 1,080 resolution. However, the TH-58PZ700 was surprisingly impressive when it came to standard definition content. Firing up The Bourne Identity DVD (yes I’m a fan of the films) produced a reasonably crisp and clear image, with little in the way of shimmer. I compared this to the HD DVD version of the same film, and although the difference was obviously stark, the standard DVD print was very watchable on this TV.

Sound is also very impressive, with Panasonic clearly making good use of the large cabinet that houses this huge screen. The TH-58PZ700 creates a wide and full soundstage and handles big action scenes with aplomb. It’s just as at home with subtle effects though, so if you’re not looking to blow the roof off with the latest action blockbuster, this TV will serve you just as well. All that said, I can’t help but think that anyone who buys a 58in TV will have a full surround sound system in their room, but it never hurts to have a good set of speakers. 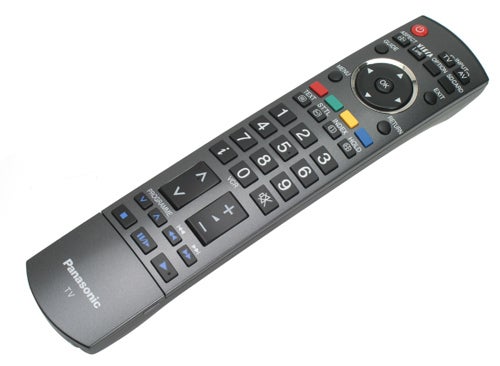 A TV this size was never going to be cheap, but at around £2,990 including VAT and delivery, it’s not that expensive either. When you consider that the 60in Pioneer KURO PDP-LX608D costs around £2,000 more than this Panasonic, it looks like an absolute bargain. OK, so the Pioneer is a truly stunning TV, and nothing can match the KUROs when it comes to black levels, but you’ll need very deep pockets to invest in one of Pioneer’s new babies. Even the 63in Samsung PS-63P76FD plasma is over £500 more than this Panasonic, and that TV is definitely a bit of a steal. If you choose to go with Panasonic’s undeniably cool stand, then that will push the price up a fair bit, but even then the TH-58PZ700 looks like good value.


The Panasonic TH-58PZ700 is very large TV at a very reasonable price. Yes, almost £3,000 is a lot for a TV, but value for money isn’t about a price tag, it’s about what you’re getting for that price, and here you’re getting a lot. The picture quality from this Full HD panel is superb, and unless you really know what you’re looking for, you’re unlikely to notice that converts 1080p 24Hz signals to 60Hz.


Black levels are solid, as I’d expect from any Panasonic plasma, while colours are rich and vivid. Even the sound is top notch by flat TV standards. If you’re looking for a first rate, large screen TV, the TH-58PZ700 should tick most of your boxes without breaking the bank.