Probably the best place to start an assessment of the 42PZ85 is by pin-pointing just what features it has to make it the ‘middle’ option in Panny’s Full HD 42in triumvirate. 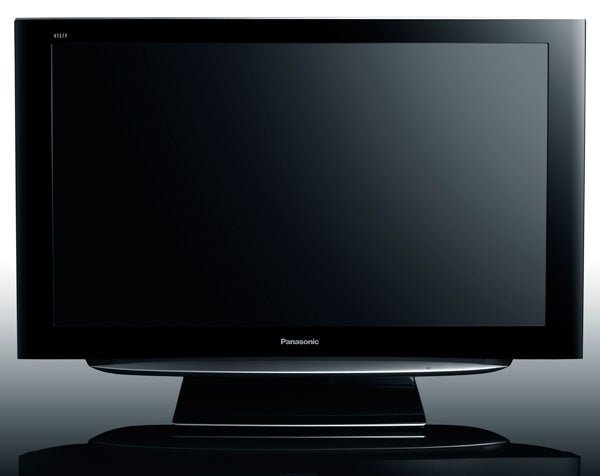 In terms of picture processing, it has the Intelligent Frame Creation system (for adding extra frames of image data to make motion more fluid) found on the top-end 42PZ800 but absent from the 42PZ80. However, it does not have the Digital Cinema Colour processing system of the 42PZ800, and so shouldn’t be able to deliver quite such an expansive colour palette.

When it comes to connections, the 42PZ85’s HDMIs number three, as with the 42PZ80, rather than the four of the 42PZ800. And while it also includes an SD card slot like the 42PZ800, this slot can only play back JPEG pictures, as is the case with the 42PZ80, whereas the SD slot on the 42PZ800 can also play AVCHD movies. 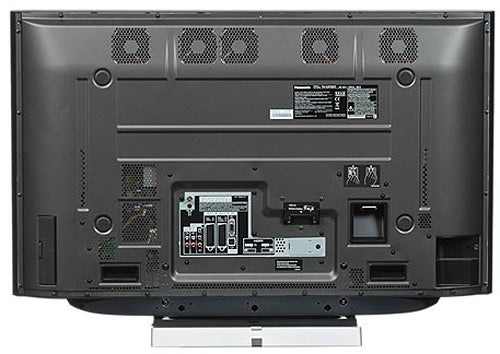 The 42PZ85 also leans towards its cheaper sibling when it comes to audio, since its speakers are two straightforward full-range 160 x 42mm affairs rather than the ‘Advanced Smart Sound’ speakers employed by the 42PZ800, which separate out their tweeters and woofers to deliver greater clarity and power handling.

Intriguingly the 42PZ85 differs quite substantially in design from its brethren, trading the usual ‘horizontal arch’ design for a straighter-edged silver highlight along the bottom, and a much more slender profile that finds the TV just 79mm deep across most of its rear versus more than 100mm with the previous Panny models. 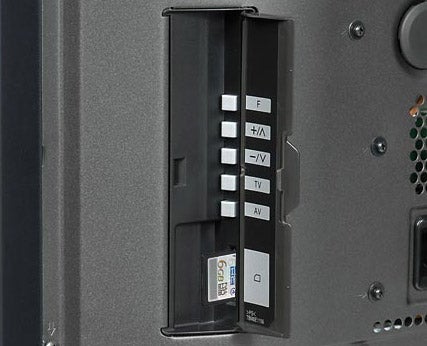 That, I think (hope!), covers all the really important differences, and puts the 42PZ85 in its proper perspective. Just to cement the positioning in your minds, let’s also put some prices on things too. At the time of writing, the best prices we could find put the 42PZ80 at around £760, the 42PZ85 at around £879, and the 42PZ800 at around £1,175. So you can figure out exactly what your extra money gets you as you step up the range. For the record, the Panasonic 42PX80, with its non-Full HD resolution and reduced contrast performance, can now be had for as little as £500.

Anyway, getting back to the matter in hand, the 42PZ85 shares pretty much the same operating system as its Full HD siblings. Which is good news considering that this operating system, with its superb remote and effortless onscreen menus, is just about as idiot proof as it gets. Handy features tucked away within the onscreen menus include a noise reduction routine, an automatic colour management tool, and a pseudo surround stage with the option to state the distance between the speakers and your wall.

From the 42PZ85’s specification, I expected it to deliver picture quality somewhere between that of the 42PZ80 and 42PZ800. And that’s pretty much exactly what it did! Not exactly a bad thing when even the 42PZ80’s picture quality is best described as excellent…

As ever with a Panasonic TV, the most outstanding single element of the 42PZ85’s pictures is its superb black level response. While maybe not quite achieving the completely natural black level extremes of Pioneer’s premium KURO plasmas, the 42PZ85 shows dark HD movie scenes – like the night-time scene in ”Wanted” where Wesley accidentally shoots one of his colleagues – with practically none of the grey mist or green undertoning that still afflicts dark scenes on so many flat TVs. What’s more, it manages to deliver these black levels without them seeming forced or low on shadow detail.

The naturalism of the 42PZ85’s blacks helps the set deliver some unusually credible dark colours too, with none of the slightly ‘PC-like’ colour toning witnessed under similar circumstances with more than a few LCD TVs. Even Angelina Jolie’s flesh looks realistic as she emerges sans clothes from her ‘healing bath’. Not that I was looking, of course. 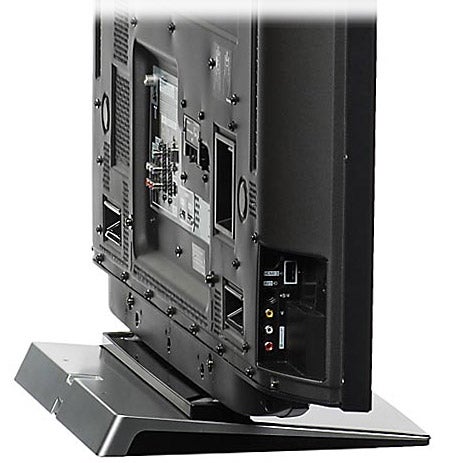 Also key to what truly is a terrific HD performance, is the image’s sharpness. The Full HD resolution again comes into its own here, enabling every pixel of a 1,920 x 1,080 source to materialise on the screen without a trace of scaling noise, grain or softness – provided, at least, that you do the sensible thing and make sure the Picture Overscan option is set to off.

Only a couple of relatively minor issues trouble me with HD viewing. First, as with other TVs in Panasonic’s current range, the Intelligent Frame Creation system needs to be used a touch sparingly. For while it improves the clarity and fluidity of motion in an entirely positive fashion for most of the time, with some of ”Wanted’s” most outrageously kinetic sequences the processing can’t quite keep up, causing momentary flickering or stuttering artefacts.

These artefacts oddly don’t seem as pronounced as they can be on larger IFC-equipped screens, perhaps simply because of the 42PZ85’s relatively small screen area. Also, I’m certainly not saying IFC isn’t worth having; merely that you should possibly commit to deactivating it for action films or sporting broadcasts.

The other issue is that colours aren’t quite as expressive as those of the 42PZ800, especially when it comes to bright reds and greens, proving the worth of that model’s Digital Cinema Colour system. The 42PZ85’s colours also aren’t as in your face as those of many LCD TVs, but for me this is compensated for by their far more subtle, natural flavour.

With the 42PZ85’s HD credentials very much in order given its reasonably affordable price, it turns out to be a solid standard definition performer too. In fact, in some ways it’s rather better than ‘solid’. Certainly standard definition sources are upscaled to the screen’s Full HD resolution without nearly as much grain or emphasis of MPEG noise as we get with many Full HD TVs.

Black levels retain their depth and tonal neutrality, too, and the Intelligent Frame Creation system manages to cope well with the reduced precision of the standard definition source.

The relative freedom from noise of the 42PZ85’s standard def efforts does seem partly down to a slight softness in the screen’s standard def presentation, though. Personally I prefer this to the sharp-but-noisy approach generally favoured elsewhere, but there will doubtless be some people who feel exactly the opposite. 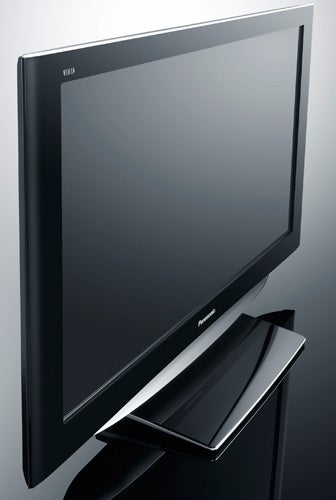 Colours also aren’t quite as believable with standard definition as they seem with HD. I’m not entirely sure why this should be the case, unless something in the rescaling processing makes it happen. But it definitely seemed as if the tendency for reds to look marginally orange and low-lit tones to look a touch green around the gills was more pronounced with standard than high definition material.

The 42PZ85 has plenty to commend it sonically, too. On the upside the set delivers some pretty high volumes without the speakers distorting of the cabinet vibrating unnecessarily. There’s plenty of breathing room in the treble register too, allowing the soundstage to appear detailed without the sort of harshness that’s common in the flat TV world.

The mid-range is more open than many too, enabling the soundstage to open up quite nicely to accommodate the demands of a decent action scene.

With the soundstage also getting propelled far and wide around your room without losing cohesion, my only negative comments would be that bass doesn’t drop quite as far as I’d ideally like, and that the ‘Voice’ mode makes sound so relatively feeble that I really can’t understand why Panasonic has even bothered including it. Stick with the ‘Music’ option if you know what’s good for you – at least when watching films.

The 42PZ85 is yet another hugely accomplished Full HD 42in plasma TV from Panasonic. And as such it’s another potentially lucrative string to Panasonic’s bow, given that no other manufacturer has managed to squeeze 1,920 x 1,080 pixels into a 42in plasma TV.

I guess there’s a little question mark hanging over whether the 42PZ85 makes quite as strong a case for its existence as either Panasonic’s money-saving 42PZ80 option or the 42PZ800 with its Digital Cinema Colour processing – processing I’m actually starting to appreciate more in hindsight than I did during my initial review.

But of course, whether a specific TV in a range of great TVs suits your particular needs or not is a decision that’s down to you, the individual. All I can do is confirm that the 42PZ85 is, indeed, a great TV.