Although Panasonic now makes 37in TVs in both LCD and plasma flavours, the brand’s love affair with plasma technology keeps LCD out of the picture for anything larger. So it is, that the 42in TH-42PX80 we’re looking at today is every inch a plasma TV.


It’s also got the potential to be every inch a bargain. For it’s not often you get a chance to get your hands on a 42in screen of – we hope – real quality for considerably under £700. Fingers crossed Panasonic hasn’t had to jettison too much of its near-legendary plasma prowess to make such a price feasible.


First impressions of the 42PX80 are mixed. It feels pleasingly solid compared with the rather flimsy finish of many of Panny’s previous plasma generation, yet its simple black rectangle design feels somewhat staid by today’s increasingly flash standards. 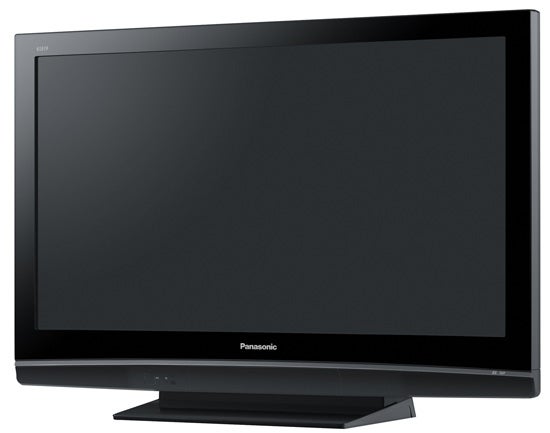 There are some slightly mixed feelings about the TV’s connections, too. On the surface all looks well, with a healthy (for this money) three HDMIs, a component video input, a dedicated PC port, an unexpected SD card slot for the direct viewing of digital photographs, and all the lower-resolution analogue video stalwarts.


But it turns out that the HDMIs aren’t able to take Deep Colour – a slightly ironic surprise given that Panasonic is in the process of launching camcorders with Deep Colour technology built in!


Still, we guess this little faux pas is hardly the end of the world on such an affordable TV – especially when it hits the mark in a couple of other key areas, namely compatibility with the now-so-important 1080p/24Hz format, and an impressive-looking native contrast ratio of 15,000:1.


When I say native contrast ratio, by the way, I mean that it’s not derived via any sneaky dynamic backlight adjustments as happens with LCD technology. With the 42PX80 the brightest whites and blackest blacks that make up the claimed contrast ratio could potentially be visible in a single movie frame – should you somehow find a single frame containing the necessary extremes of light and dark.


Before we get accused of LCD bashing here, though, we must point out that the 42PX80 does fall short of the vast majority of its similarly sized LCD rivals when it comes to resolution, ‘only’ boasting a pixel count of 1024 x 768. This is enough pixels, of course, to earn the TV its crucial HD Ready wings, but it falls short of the 1,920 x 1,080 pixels sported by full HD TVs.


Still, contrary to popular thought, resolution really isn’t the be all and end all of a TV’s performance. Sure, a full HD pixel count on an LCD can reduce scaling noise and improve detail and colour blending, but on a plasma the emissive nature of the light generated by the plasma photons exciting the RGB phosphors can also lend itself to improved colour accuracy and blends (rather like a CRT). Furthermore, other factors such as black level and motion handling can have a far more immediate and profound effect than simply resolution.

Let’s not forget, either, that all scaling of any sources – standard or high definition – will be done on the 42PX80 by Panasonic’s esteemed V-Real 3 image processing engine. With additional algorithms focussed on improving colour response, motion handling and, especially video noise levels, we found V-Real 3 doing a great job on the 37in 37PX80 a few weeks ago, so there’s no reason to suppose it will let the side down here.


A slightly unexpected secondary element of the 42PX80’s image processing is a 100Hz system. Although these are now commonplace on LCD screens to reduce problems with motion blur, with plasma technology the idea is that doubling the usual PAL refresh rate will make plasma images look more stable and solid – especially during camera pans. 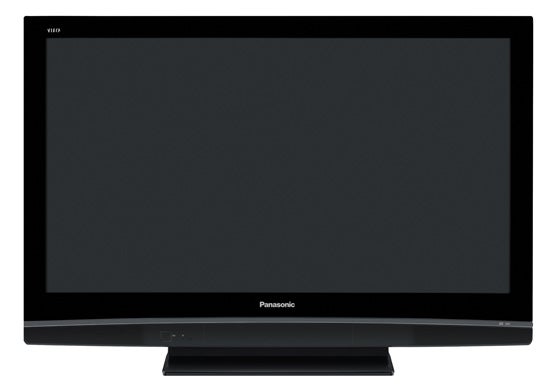 A brief tour of the 42PX80’s exemplarily laid out onscreen menus is enough to convince us that aside from a handy energy-saving mode, we’ve pretty much covered all the TV’s truly significant features already. So we might as well get on with finding out if Panasonic has had to sacrifice any of its traditional plasma strengths in order to sell a 42in TV for under £700.


A few minutes spent in the company of the perennial night skies of ”30 Days of Night” on Blu-ray proves that there doesn’t seem to be any corner cutting going on when it comes to black level response. The dark backdrop to all the exterior town scenes looks suitably inky – as do the vampire’s chilling eyes. In fact, far from suffering any price-induced quality reduction, the 42PX80’s black levels are even deeper than those of Panasonic’s already outstanding previous plasma range.


As well as being deep, the 42PX80’s black levels feel completely natural. By which I mean that you can make out effortlessly all sorts of subtle details in even the darkest of corners. This gives dark images real depth in place of the slightly hollow, flat look dark scenes tend to have on all but the absolute best LCD screens.


A more unexpected plus point about the 42PX80’s pictures is their sharpness. For even though this isn’t a full HD TV, as the chief vampire rubs the blood of his deceased ‘partner’ over his head – nice – you can see each individual hair. Plus, needless to say, every last dribble and splatter of gore on all the vampires’ pale faces gets immaculately rendered.

The clarity and detail in the 42PX80’s HD performance clearly proves the strength of the V-Real 3 engine. As does the set’s standard definition performance, which finds standard def images from the set’s built-in digital tuner getting upscaled to the screen’s higher resolution much more successfully – as in, with less noise, greater sharpness and improved colour toning – than we find with most flat TV rivals.


Plasma technology generally handles motion better than LCD but with the 42PX80 Panasonic has really underlined that argument by tackling in impressive fashion any residual problems noted on its previous models, such as faint dot noise over horizontal motion, or slight judder. Even 1080p/24 sources look as smooth as you like. 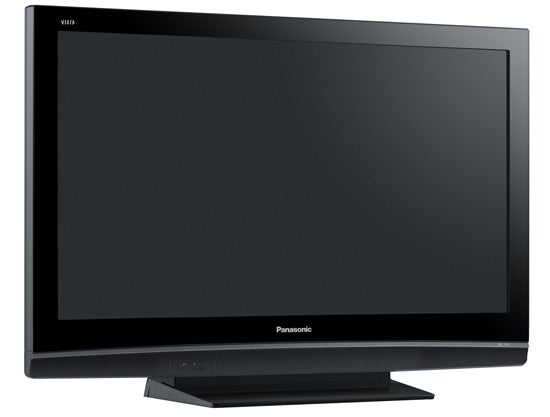 With pictures also catching our eye with their overall freedom from video noise, their rich, mostly natural colour palette and their exceptional stability (thanks, no doubt, to the 100Hz element), the 42PX80 is arguably the best Panasonic plasma TV to date. Not bad considering it’s also the cheapest.


That’s not to say that it’s perfect, though. For instance, colours don’t look as vibrant and aggressive as those of some rival LCD sets, or Pioneer’s premium KURO plasmas. Also, while colours are generally believable, one or two tones don’t look quite right. Deep reds, for instance, can go a bit orange, and the occasional skin tone can appear slightly over-ripe.


Finally in the negative column, while the 42PX80’s scaling of 1080-line sources to its 768 native resolution is good, a true full HD plasma could give you a touch more noiseless transparency when watching HD images.


But then, of course, a full HD 42in plasma TV would likely cost you considerably more. And in my opinion the quality of the 42PX80’s rescaling processing is more than sufficient to justify sacrificing a little native resolution in order to save a few quid.


Wrapping up our tests of the 42PX80’s AV talents with its audio capabilities, it’s pleasing to find the set pumping out considerably more volume and dynamic range than we’re used to hearing with Panasonic’s ‘PXx0′ plasma ranges. However, to get truly excellent sonics, you need go for models higher up in Panny’s new range that use the brand’s clever Advanced Smart Sound speaker designs.


After combining Panasonic’s finest plasma performance to date with an amazingly aggressive price for a 42in flat TV, the 42PX80 starts to look like arguably the biggest bargain of the year so far.