For all of you out there who think that ever improving LCD TV technology has killed off plasma, let me tell you that you’re wrong. Very, very wrong in fact. There’s no denying that LCD TVs have shown amazing improvements over the past couple of years, while the price points have dropped faster than a lead balloon, but it’s important to remember that plasma has hardly been standing still during this time. In fact, it’s fair to say that both Panasonic and Pioneer have been pushing the boundaries, not just of plasma technology, but of high definition TV in general. 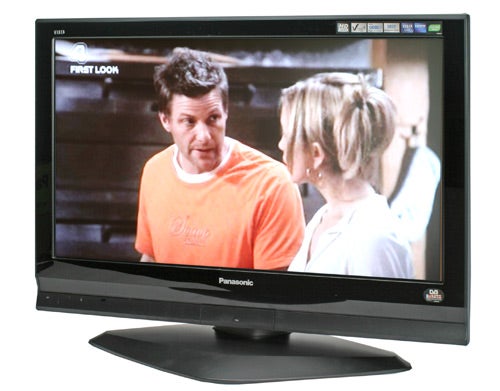 That’s not to say that Panasonic doesn’t think that LCD is a good technology, because it does. Panasonic sells a great many LCD TVs, but the company firmly believes that LCD is the right option up to 32in and anything from 37in up should be plasma. Of course many other manufacturers would ague with this logic, but it’s hard to argue with the fact that Panasonic’s last generation of both LCD and Plasma screens were superb.

But Panasonic hasn’t stood still, with its latest range of screens offering some welcome additions and improvements. For me, the most interesting model in Panasonic’s new range is the 42in 1080p plasma, but I haven’t got my paws on a sample yet. So, in the meantime I thought I’d look at the latest 37in unit – the Viera TH-37PX70.

I actually have a Panasonic Viera TH-37PX600 at home, so I was keen to see how the latest 37in model compared to the old one. The most obvious difference is in the styling, with the new design representing a definite improvement. Whereas the old model had a silver surround with the speakers mounted at the sides, the TH-PX70 has a trendy gloss black bezel, with the speakers mounted underneath the screen. This means that the new model is smaller to the tune of 60mm in the width department, and considering that most consumers going for a 37in screen are working to a dimensional budget, the TH-PX70 could look even more attractive than its predecessor. In fact, many of the guys in the office thought that this TV looked smaller than 37in, because the overall design is so compact.

The TH-37PX70 doesn’t boast a Full HD panel, instead sporting a resolution of 1,024 x 720 – elongated pixels make up the widescreen aspect ratio, as is often the case with plasma TVs. The rest of this set’s HD Ready credentials come in the form of twin HDMI ports (HDMI 1.3 no less) and a set of component video inputs. You also get twin RGB Scart sockets, a D-SUB input for PC connection and a CI slot for adding subscription packages to the integrated digital tuner. Of course the TH-PX70 can accept the mandatory 720p and 1080i inputs, but it is also happy to process a 1080p input through both HDMI and component video connections. Obviously the 1080p input is having to be scaled down, but it’s still good to see that it can handle the signal.

One thing that is conspicuous by its absence is an SD card slot. My TH-PX600 has an SD card slot and the TV is able to record video in MPEG-4 directly to a card, although it won’t playback DivX files, which is a shame. That said, the TH-PX70 represents the entry level of Panasonic’s new plasma range, so the lack of SD support isn’t a huge surprise. 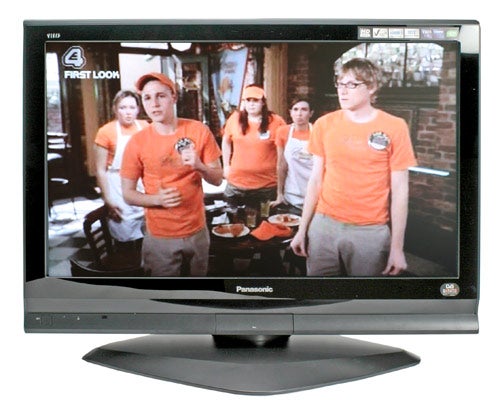 It’s the fact that this is an entry level TV that makes its picture performance all the more amazing, because if there was ever an argument in favour of plasma over LCD for the masses, this TV is it. I’m sure you’ve heard many times about how much brighter plasma is than LCD, and how the black levels and contrast ratio are streets ahead – well, I’m afraid I’m going to have to say the same things again. I set the TH-37PX70 up next to the Toshiba Regza 42C3030D and the Panasonic, quite simply blew it away on pretty much every level. Obviously you’re getting a bigger screen with the Tosh, but I’d happily go for slightly smaller physical size if it means vastly superior picture quality.

Panasonic was kind enough to lend me its brand new DMP-BD10A Blu-ray player to test this TV. In essence the DMP-BD10A is the same as the DMP-BD10 that we reviewed back in January, except the a new firmware allows for Dolby TrueHD, Dolby Digital Plus and DTS-HD support. Panasonic has also dropped the price on its new Blu-ray considerably in an attempt to be more competitive with Toshiba’s HD DVD players. 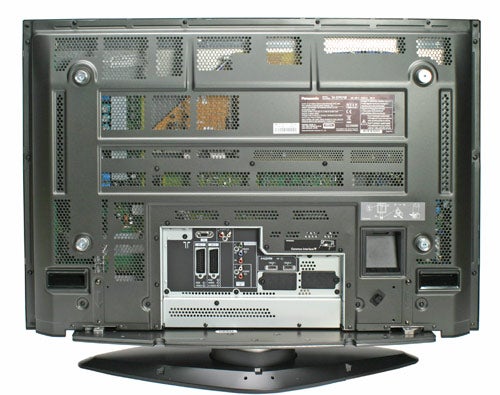 Firing up the superb Blu-ray print of Casino Royale really showed the TH-37PX70 off to great effect. The chase scene through a Madagascan building site confirmed that this TV can handle very bright images without losing detail in areas of high intensity, while also managing to keep up with the action no matter how fast the movement. At the other end of the spectrum, it also did a sterling job with the night time scene at Miami airport, where the quoted 10,000:1 contrast ratio made its presence felt. Despite the dark setting, the TH-37PX70 managed to pick out the subtlest of details, and again didn’t appear to have any issues with fast motion – of which there is a great deal in this scene.

The impressive contrast and black levels made themselves known again when I watched V for Vendetta on HD DVD. This is a notoriously dark movie, both figuratively and literally, meaning that some LCD screens can struggle to create the dark, menacing ambience that this disc deserves. There were no such issues with the TH-37PX70 though, it managed to produce deep blacks without losing detail, while still making colours vivid and rich when necessary. 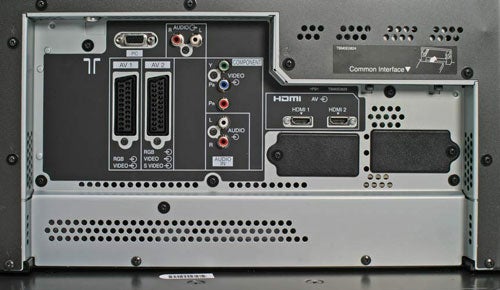 The same talents ring true when playing a particularly dark game like Gears of War on the Xbox 360, while bright and colourful games like the superb Virtua Tennis 3 just come to life on this TV. Obviously the pictures aren’t as sharp as they would be on a Full HD 1,920 x 1,080 panel, but with a screen this size, you’re unlikely to notice too many soft edges, especially from the comfort of your sofa.

Of course high definition performance is only half the story, since we’re all still stuck watching a lot of standard definition TV, and will be for quite a while. Take the Champions League for example, I lament the games that are shown on ITV because not only does that mean I don’t get to watch in HD, but it also means that I have to suffer ITV’s substandard SD broadcasts. Thankfully the TH-37PX70 does a pretty good job with standard definition feeds too, particularly from its built-in digital tuner. Yes, some poor digital feeds can end up looking either blocky or over processed, but that’s no fault of the TV, it’s a symptom of the very low bit rate put out by some Freeview channels. 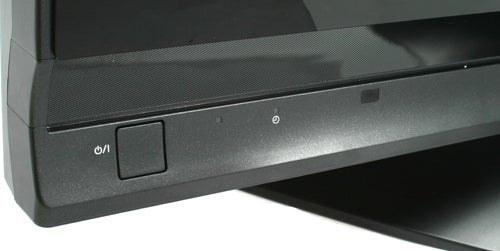 This is the first TV we’ve reviewed that incorporates Viera Link, which is basically Panasonic’s branding for Consumer Electronic Control (CEC). The point of Viera Link is that all of your AV equipment should communicate, thus allowing you to use a single remote control for most things. Since the DMP-BD10A also supports Viera Link I was able to put this new feature to test. Picking up the Blu-ray remote and pressing the power button results not just in the player switching on, but also switches the TV on and selects the correct HDMI input. Likewise, when you power the TV off, the Blu-ray player automatically shuts down too.

But the real beauty of Viera Link is that your TV actually knows what devices are connected to it even if they’re not powered on. So, if I happen to be watching TV and have the TV remote control in my hand, I can simply press the Viera Link button and I’ll be presented with a list of my connected devices. I then select the device I want to power on – like the Blu-ray player – and hey presto, it turns itself on and the TV automatically switches to the correct HDMI input.

I’m always a bit worried about the sound quality from TVs that hide the speakers – although the aesthetics benefit, the sound quality often suffers. It therefore came as something of a surprise that the sound from the TH-37PX70 isn’t bad at all. Obviously it’s not going to fill your room the way a full surround system would, and it lacks the bass response of some TVs with larger speaker sets, but on the whole the sound is clear and free from distortion. If you like to really pump up the volume during action movies you may want to think about external sound options, but for the most part this TV gives a good account of itself in the sound department. 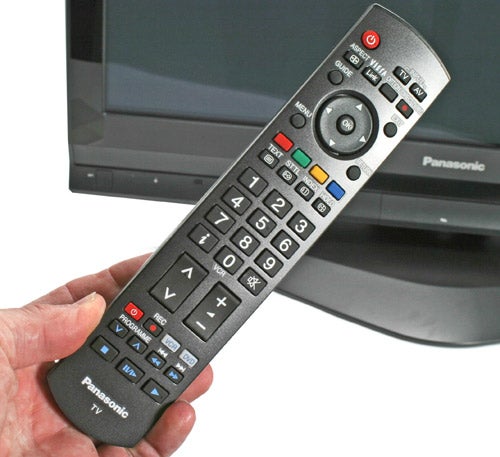 Panasonic has put some thought into the remote control too – it’s not the best looking device I’ve ever seen, but it is very comfy in the hand and well laid out. The 7-day EPG is also quick to respond to remote control presses, and it’s good to see an option to skip forward 24 hours – other manufacturers should take note.

But even a great quality screen can be let down by a high price, as we saw with the Fujitsu Plasmavision P42XHA58, so it’s good to see that Panasonic hasn’t fallen foul of this hurdle. In fact when it comes to price Panasonic has really put the cat among the pigeons with the TH-37PX70. With a street price of only £775 including VAT and delivery, this TV really is a bargain for anyone looking to make the move up to high definition.

Panasonic has created a great TV in the shape of the TH-37PX70. It may not have Full HD credentials, but the price / performance ratio is staggeringly good. If you’re looking to buy your first HDTV and don’t want anything too big, this Viera will provide you with excellent picture quality at a very attractive price.